It’s a Tuesday afternoon, and the Maccabi Electra basketball team is wrapping up a home-court practice at Tel Aviv’s Nokia Arena. The night before, Electra guard Sylven Landesberg tipped the scales against Ironi Nahariya with 16 points and six rebounds. Tomorrow night he and his teammates will be victorious over Alba Berlin, in Germany.

But right now, he’s taking a few minutes before hitting the showers to talk to ISRAEL21c about what it’s like for a high school and college all-star from New York City to play for the Israeli Super League.

When he arrived at age 20 to join Maccabi Haifa in 2010 – after playing for the Sacramento Kings in the NBA Summer League — Landesberg had never visited Israel and didn’t know the language.

“When I finished college and was considering my options, I sat down with my parents and we agreed that Israel was a good choice,” says the 6-foot-6, 205-pound player, whose mother is Trinidadian. Because his father is Jewish, he chose to exercise his right to immediate Israeli citizenship.

Landesberg was not short on options. He was a star player at Holy Cross High School in the New York borough of Queens. He was named 2008 New York State Mr. Basketball and 2008–09 Atlantic Coast Conference (ACC) Freshman of the Year for the University of Virginia Cavaliers. He set a freshman record with 12 20-point games and was named ACC Rookie of the Year.

Since signing a three-year contract with Electra in July 2012, Landesberg has been a standout scorer. He was pivotal to the Tel Aviv team winning the Euroleague basketball championship last season.

US and Israeli basketball aren’t identical. “For a lot of Americans, when they first come here it’s tough to adjust to the slower-paced games, and some of the rules are a little different,” Landesberg explains.

In America, for example, when a player gets his hands on the ball he can take a “first step” without violating the rule against “traveling” (moving the ball without dribbling). 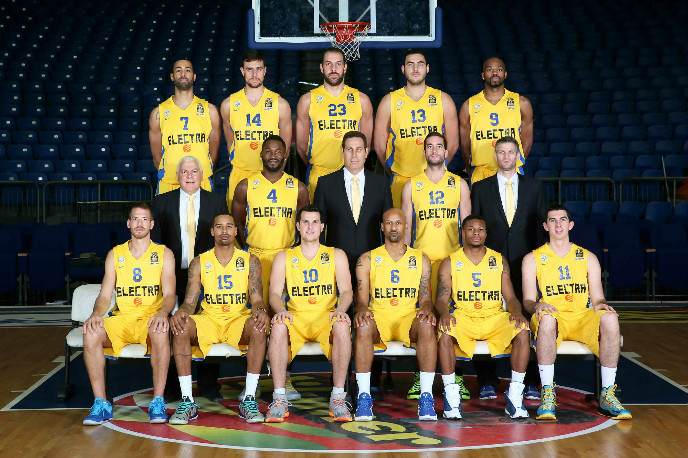 Rules aside, he adds, “Israel is the easiest place to adjust to. All my teammates say the same thing. Professionally, the way the organization handles us is amazing — not every country and team is like that. Personally, I like that the food selection is amazing and the weather is great all the time.”

Landesberg is the only one among them who is also an Israel Defense Forces soldier. He completed military training last year and now serves his adopted country as manager of an IDF gym — not a basketball gym, he clarifies, but a “pumping iron” gym.

With no known relatives in Israel, Landesberg’s basketball teammates and army buddies are his surrogate family.

“When I first came at 20, I didn’t really understand what it meant to be Israeli,” says Landesberg. “Doing the army made me feel closer to the country. I made a lot of friends in [army training] and still keep in touch with them. Some of them served in Gaza last summer and told me about their experiences.”

Most of his everyday conversation is in English; there is no need for Hebrew on the Maccabi Electra court. “That’s a blessing and a curse,” Landesberg says with a smile. “Next week, I’m starting private Hebrew lessons.

Though his big-picture dream is playing for the NBA someday, he likes where he is now. “The competition is great, the league is strong and I enjoy competing in Europe.”

Landesberg resides in seaside Herzliya Pituah, home of ambassadors and diplomats. “I didn’t expect Israel to be so beautiful, and when I got here it was just jaw-dropping,” he relates.

His mother and sister have come to visit, and he saw the whole family in October when Maccabi Electra took on the Brooklyn Nets in an exhibition game during its pre-season Euroleague US Tour. The Israelis lost the match, and afterward a Brooklyn Jewish community leader was assaulted outside the arena. Landesberg says he and his teammates nevertheless feel their foreign appearances are important and appreciated.

“I’m proud to represent the team and Israel,” he says. “We get so much support from Israelis and from fans around the world. They all want us to do well.”

UNCOVER ISRAEL - Get the ISRAEL21c
Weekly Edition free by email
Sign Up Now!
Bring Israel's story to life.
Millions of people around the world rely on us to gain a deeper understanding of Israel. We are the trusted source for original content you won't find anywhere else.
You can make a difference. Donate today to support journalism that brings Israel’s story alive.
SUPPORT ISRAEL21c
Read more on:   Euroleague, Nokia Arena, Sylven Landesberg, basketball, Profiles, Culture, maccabi Tel Aviv