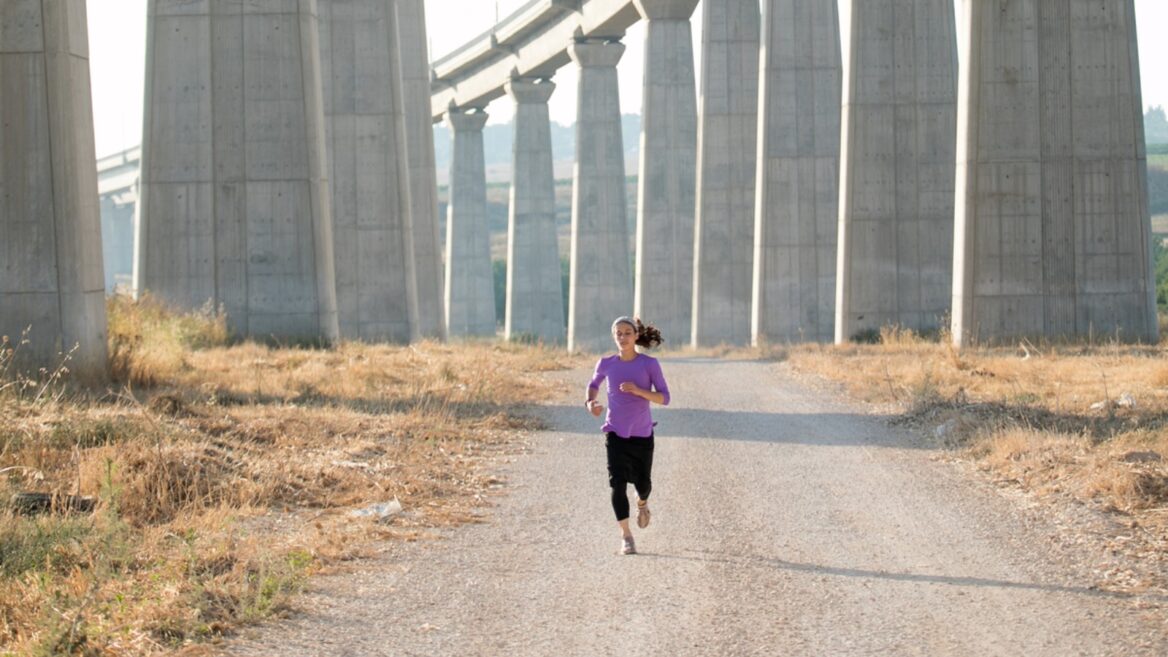 It’s not every day that Europe’s largest sportswear manufacturer features an ultra-orthodox Jew on a billboard.

But that’s precisely what happened when Adidas portrayed Israeli national marathon and half marathon champion Beatie (Bracha) Deutsch in an ad campaign earlier this year along Tel Aviv’s Ayalon Highway.

The 31-year-old mother of five, who immigrated to Israel at the age of 19, recently appeared in the company’s “Impossible is Nothing” campaign in her signature look – a below-the-knees skirt, ¾-length sleeves and a headscarf. Beatie Deutsch at the June 2019 Riga Half Marathon. Photo by Amit Ne’eman

But this isn’t the first time that American-born Deutsch, whose moniker on Instagram is @marathonmother, has defied stereotypes.

Nothing about her story is normal.

Deutsch, who narrowly missed competing for Israel in the Tokyo Olympics, came to the sport only five years ago. She began running after the birth of her fourth child – the fourth in six years.

After losing too many informal races at family reunions on the beach, Deutsch decided to commit herself to training for a marathon to get in shape. Her first official race was the 2016 Tel Aviv Marathon, which she ran with a time of 3 hours and 27 minutes.

Deutsch, who is a tiny 1.5 meters (4-foot-9) tall, ran her next marathon a year later, in 2017, when she was seven months pregnant, training until the day she gave birth.

Her race time for the marathon – 4:08:16, hinting at a great deal of untapped potential. 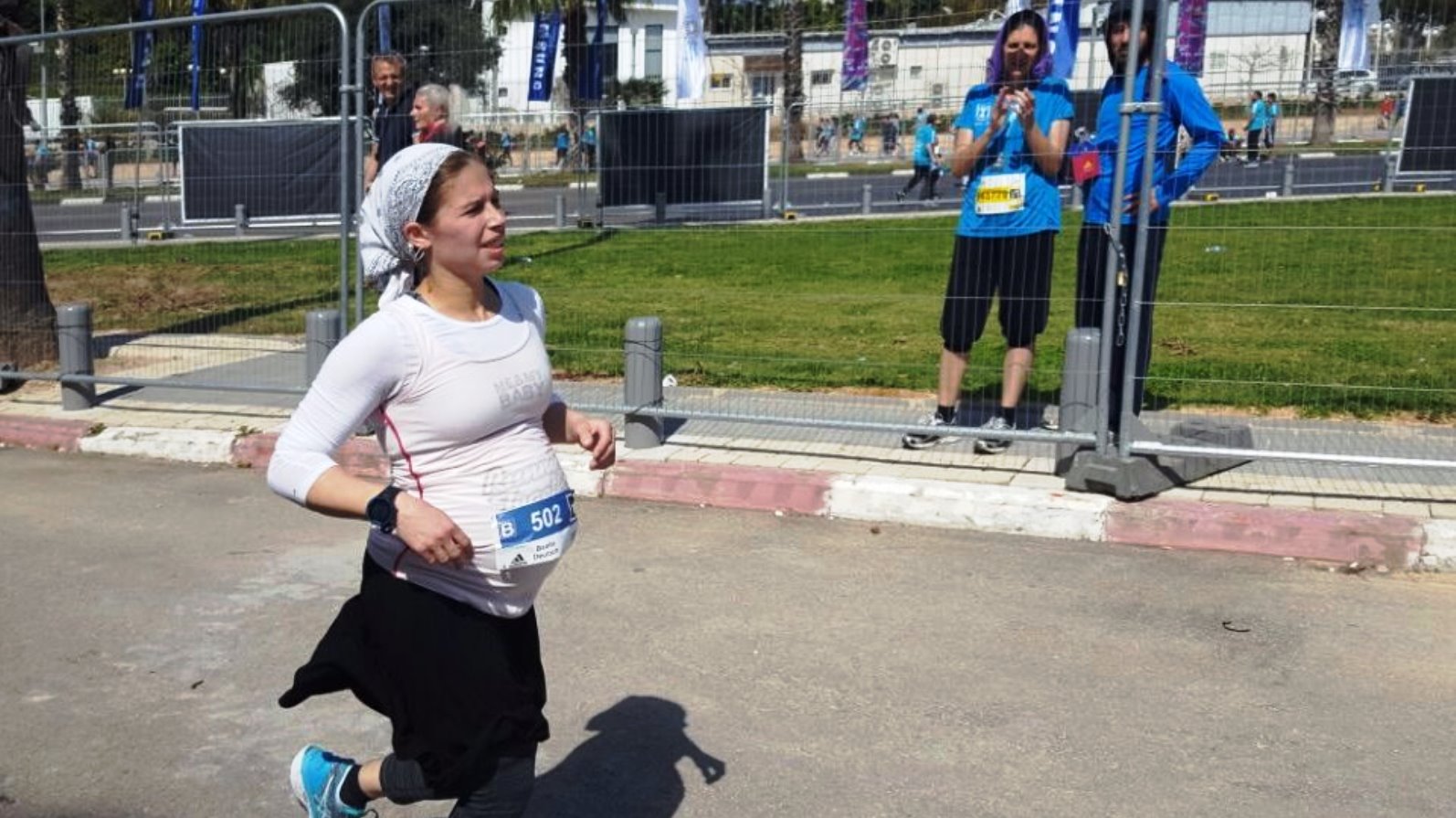 Beatie Deutsch running in the 2017 Tel Aviv Marathon in her third trimester. Photo via JewInTheCity.com

“I had the best labor, delivery and recovery with my fifth child, the only pregnancy I ran through,” admits Deutsch.

Deutsch went on to win half-marathon victories in Latvia and Tel Aviv in 2019 and Miami in 2020. 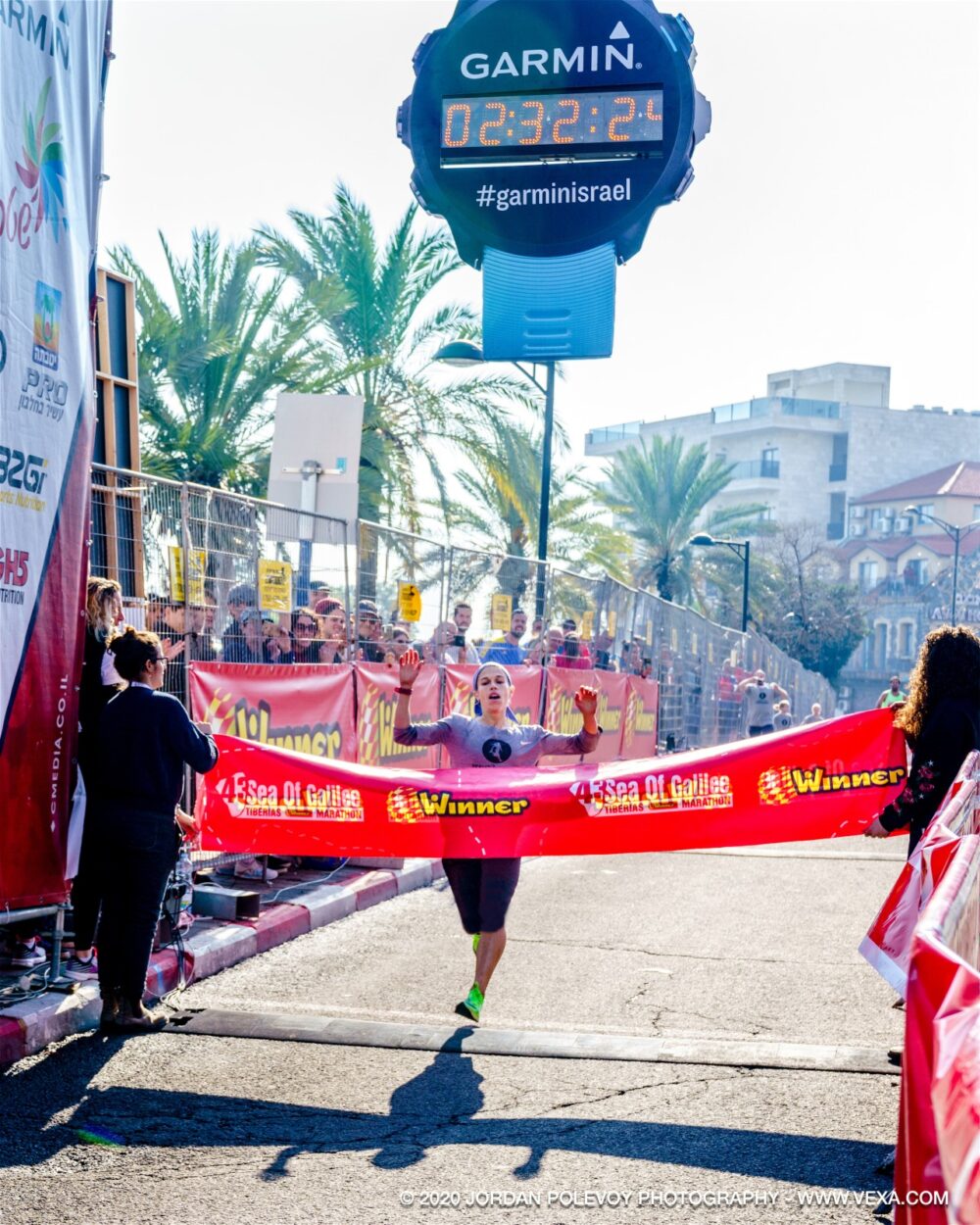 She also took Israel’s national championship, the Tiberias Marathon, in 2019, clocking 2:42:18, three minutes faster than the then most recent Olympic standard set in 2016. In 2020, she took the Tiberias women’s title at 2:32:25, shaving about 10 minutes off her previous time.

It hasn’t always been easy. In January 2018, shortly before the Jerusalem marathon, Deutsch was diagnosed with the autoimmune disease celiac, which leads to damage in the small intestine if you eat gluten.

“I was anemic for a while before I realized. I felt really weak and had to stop to catch my breath frequently,” says Deutsch, who now maintains a gluten-free diet. “Once I stopped eating gluten, my body started absorbing [iron].”

Then in 2020, she injured her left shin, and had to take six weeks off from running.

Deutsch had hoped to represent Israel at this summer’s Tokyo Olympics, rescheduled from 2020. She set a personal record of 2:31:39 at an April qualifying race in England, but came in two minutes, nine seconds shy of the Olympic criterion.

“I initially qualified through the ranking system but then with the prolonged qualifying period, I had to hit the guaranteed standard of 2:29:30,” Deutsch explains. “I trained to run that time and was in the best shape of my life but unfortunately didn’t quite make it.”

For Deutsch, running has become a meditative experience. “I find running to be an incredible opportunity for prayer and to talk to God,” she tells ISRAEL21c.

The joy, she says, is in “being alone, discovering a new place and soaking in every tiny detail of the world around me.” 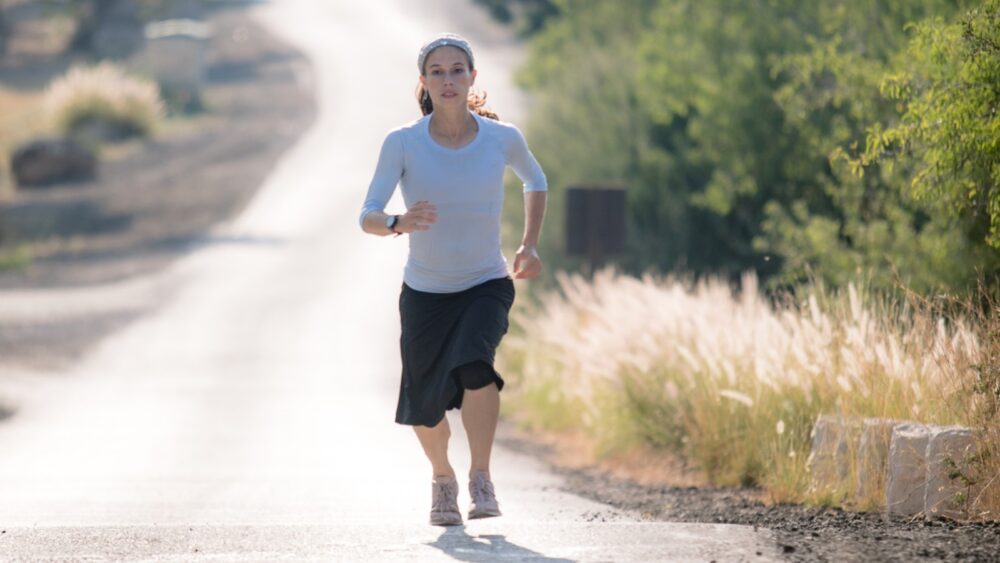 As for most people, Deutsch has experienced many obstacles recently, largely due to the pandemic, which has canceled races, challenged training schedules, reduced sponsorship offers and hampered opportunities to land prizemoney.

In June, when a fellow athlete in the Israeli track-and-field delegation tested positive for Covid-19, the entire team, including Deutsch, could not fly to the European Championships in Bulgaria.

“If there’s anything I’ve learned from running,” Deutsch posted online after her disappointing Wales showing,“ it is to stand strong and stay positive, to drown out the voices of self-defeat and hold on to faith. I want to make the most of this one precious life that I was given.”

Missing Tokyo hasn’t crushed Deutsch’s Olympic dreams of the Paris Games in 2024. Meanwhile, she is heading to Berlin’s BMW Marathon, slated for September 26. There, Deutsch will attempt the qualifying time again. If she succeeds, she’ll represent Israel in the World Championships in July 2022 in Eugene, Oregon. 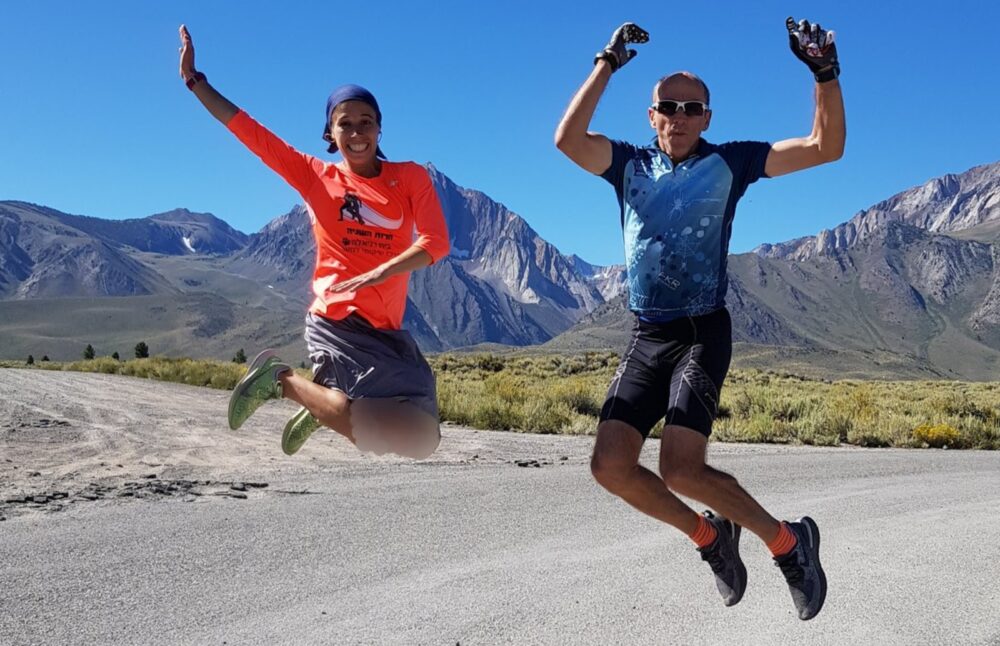 “Super excited for the opportunity to run my heart out in Berlin, and finish at the historic Brandenburg Gate, where Hitler was appointed chancellor and proclaimed his plans to annihilate the Jews,” Deutsch posted on Facebook.

“Can’t think of a more fitting way to demonstrate Am Yisrael Chai [the people of Israel lives] than by racing as a proud Orthodox Jewish mother.” 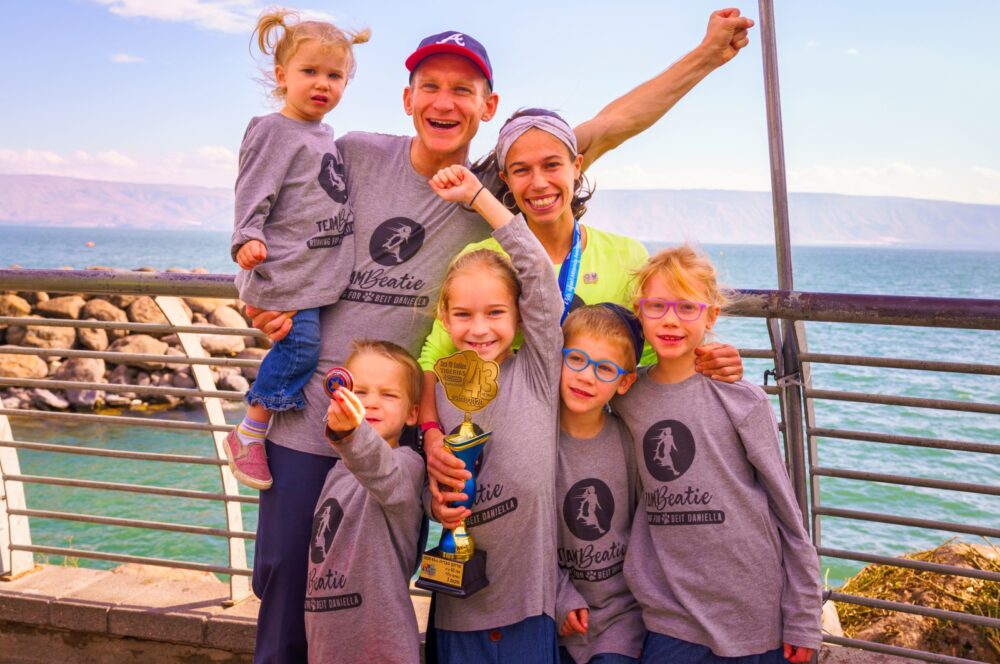 Beatie Deutsch and her family on the winner’s podium at the Tiberias Marathon in 2020. Photo by Jordan Polevoy Photography

Today, Deutsch is sponsored by the Israeli Olympic Committee, allowing her to focus all her energy on running.

She rises at 5am to clock roughly 160 kilometers (100 miles) each week. She also strength trains thrice weekly on top of swim and/or cycle sessions a few times a week. On Sundays, she runs about 36 kilometers (22 miles); the standard marathon is 42 kilometers.

Deutsch tries to prioritize sleep as “the best way to recover, but it’s not easy as a mom,” she notes. 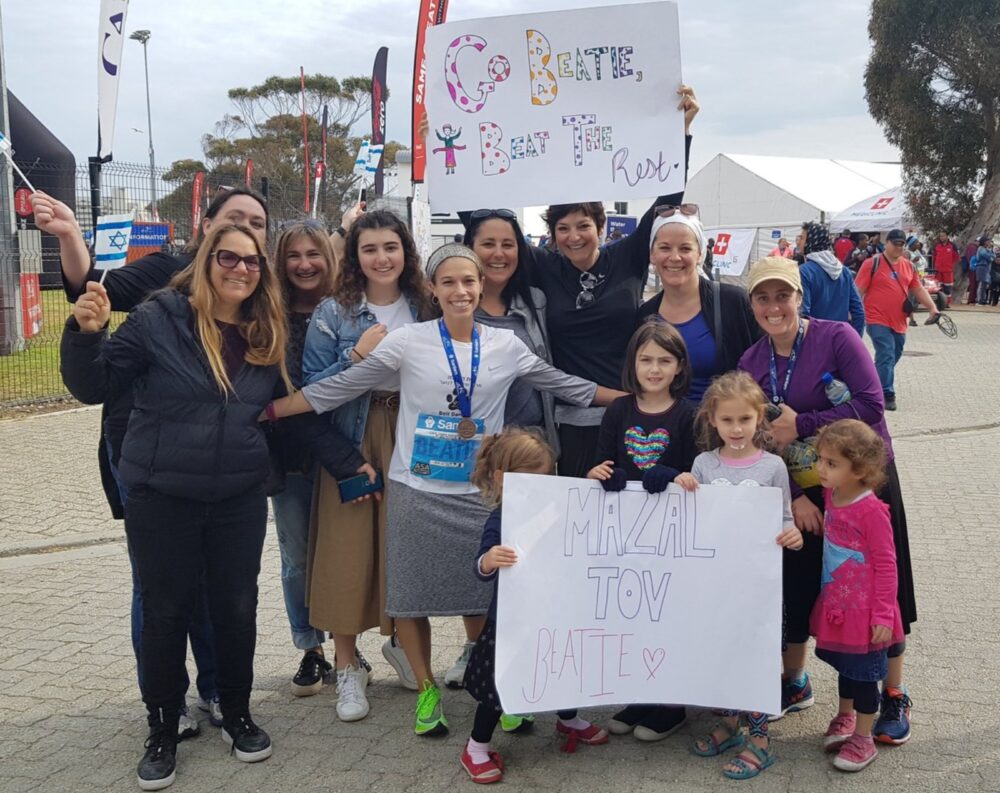 Beatie Deutsch at the September 2019 Cape Town International Marathon with women and girls from the local Jewish community. Photo courtesy of Beatie Deutsch

Deutsch leverages her public profile to raise awareness and, so far, 115,000 shekels for Beit Daniella, an Israeli recovery day center for youth struggling with mental-health issues including eating disorders.

Racing enhances rather than hampers her religious observance, Deutsch says.

“Conflict only happens when you take running out of context and see it as the be all and end all. We are ultimately souls, not bodies. And we need to remember that Hashem [God] is the source of our strength. We can’t take credit for our accomplishments.”

Her modest attire, however, does raise questions. “I’ve definitely been asked about it,” Deutsch says.“ It has an impact, though it depends on the weather and race distance.”

Deutsch was first nicknamed Speedy Beatie on the basketball court at her all-girls Orthodox high school in her native Passaic, New Jersey.

Née Beatrice Rabin, she earned a black belt in taekwondo at 16 and studied gymnastics from 6 to 12. She immigrated after marrying her husband, then an avid cyclist. They reside in Neve Michael, a moshav (cooperative community) near Beit Shemesh.

“Resilience, grit and determination” are among the qualities Deutsch hones through training.  She also credits the sport with getting more in touch with herself. 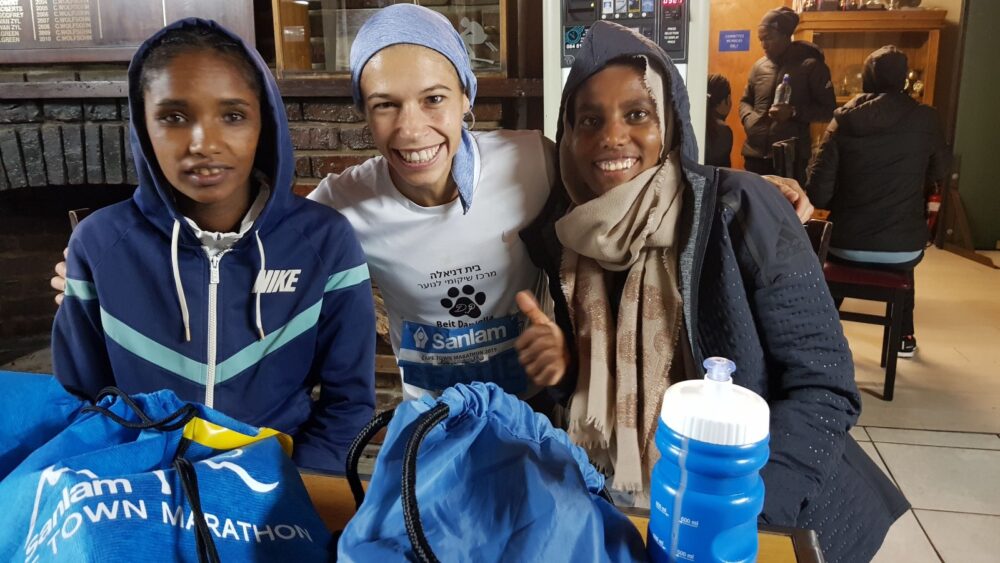 Running, she says, “creates an attitude that spills over into all areas of our lives, demanding more from ourselves, striving to become the best version of ourselves, pushing past perceived limitations, stepping out of our comfort zone.”

But that’s not all that brings her satisfaction. “Being a mom to my five children, including one with special needs,” Deutsch says, “is definitely an accomplishment.”

UNCOVER ISRAEL - Get the ISRAEL21c
Weekly Edition free by email
Sign Up Now!
Bring Israel's story to life.
Millions of people around the world rely on us to gain a deeper understanding of Israel. We are the trusted source for original content you won't find anywhere else.
You can make a difference. Donate today to support journalism that brings Israel’s story alive.
SUPPORT ISRAEL21c
Read more on:   Culture, sport, israeli athletes, Beatie Deutsch