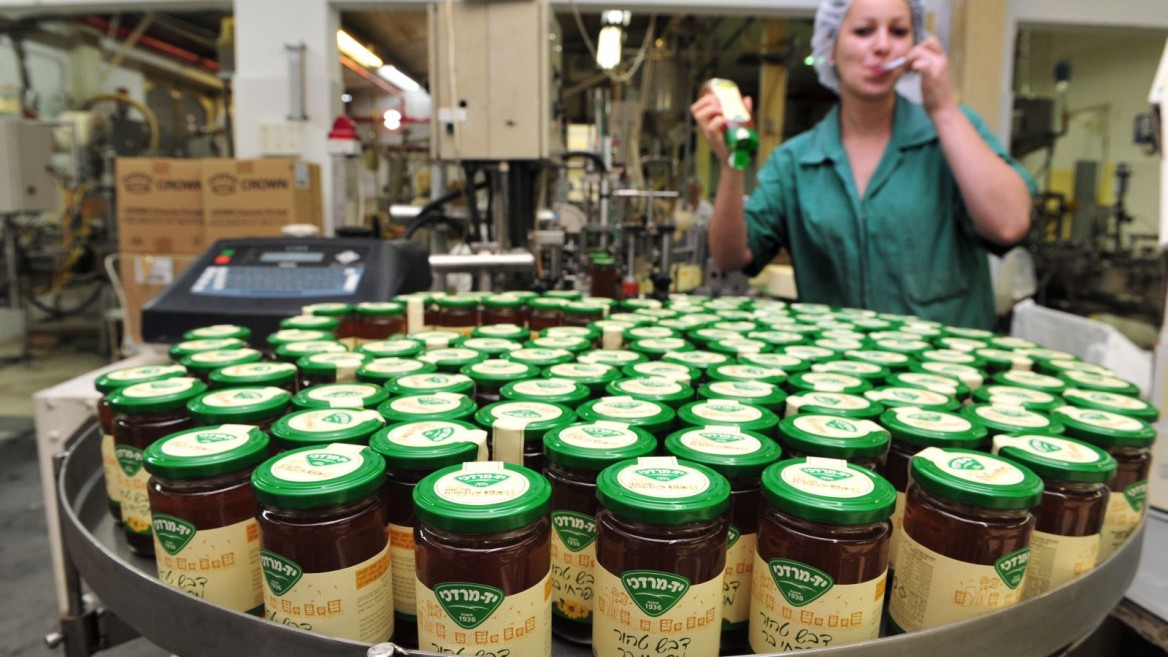 Rosh Hashana — the Jewish New Year 5776 – is just around the corner. This year, it begins at nightfall September 13.

The two-day holiday is marked by dozens of varying customs that include a hodgepodge of foods, rituals and aspirations.

ISRAEL21c has scoured research papers, rabbinical writings and even a few tabloids, seeking out nine facts you may not know about this holy day. 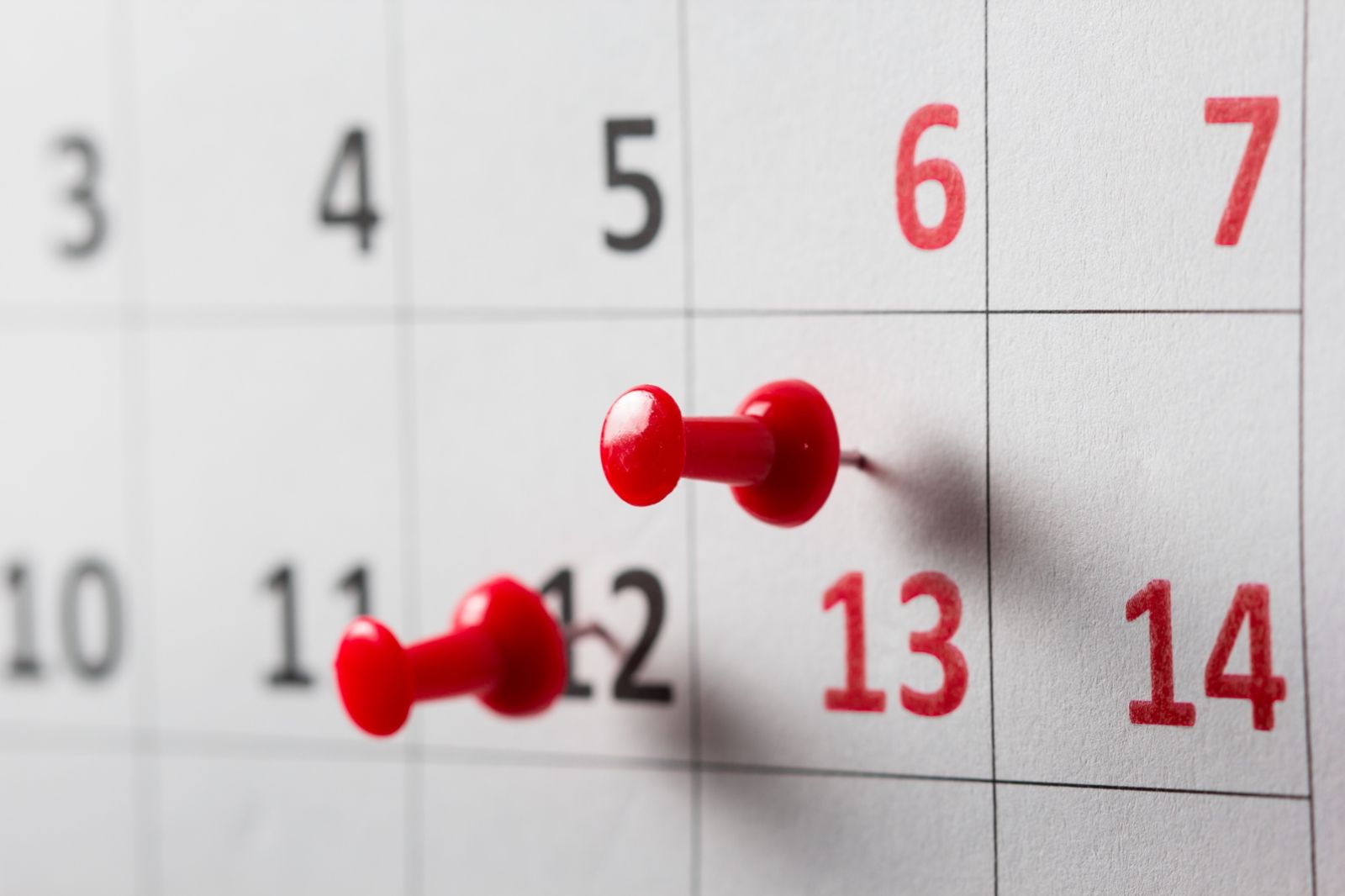 The first day of Rosh Hashana will never be on a Sunday, Wednesday or Friday (this year, the holiday is Monday and Tuesday). Because all Jewish holidays begin at sundown on the evening before and end at nightfall of the next day, the modern Hebrew calendar is designed so as not to interfere with Sabbath preparations. As such, Yom Kippur cannot fall on a Friday or Sunday and that means Rosh Hashana – which occurs 10 days prior – cannot fall on a Wednesday or Friday. The Jewish New Year cannot fall on a Sunday either, so that the holiday of Hoshana Rabba at the end of Sukkot does not fall on a Saturday, which would make it impossible to carry out certain rituals associated with the holiday. The four days on which Rosh Hashana are allowed to fall are also called the “four gates.”

Israelis consume 4,000 tons of honey per year. In the month of Tishrei alone, they consume 2,000 tons, according to the Ministry of Agriculture. In case you were wondering, honey bees must gather nectar from five to eight million flowers to make one jar of honey. 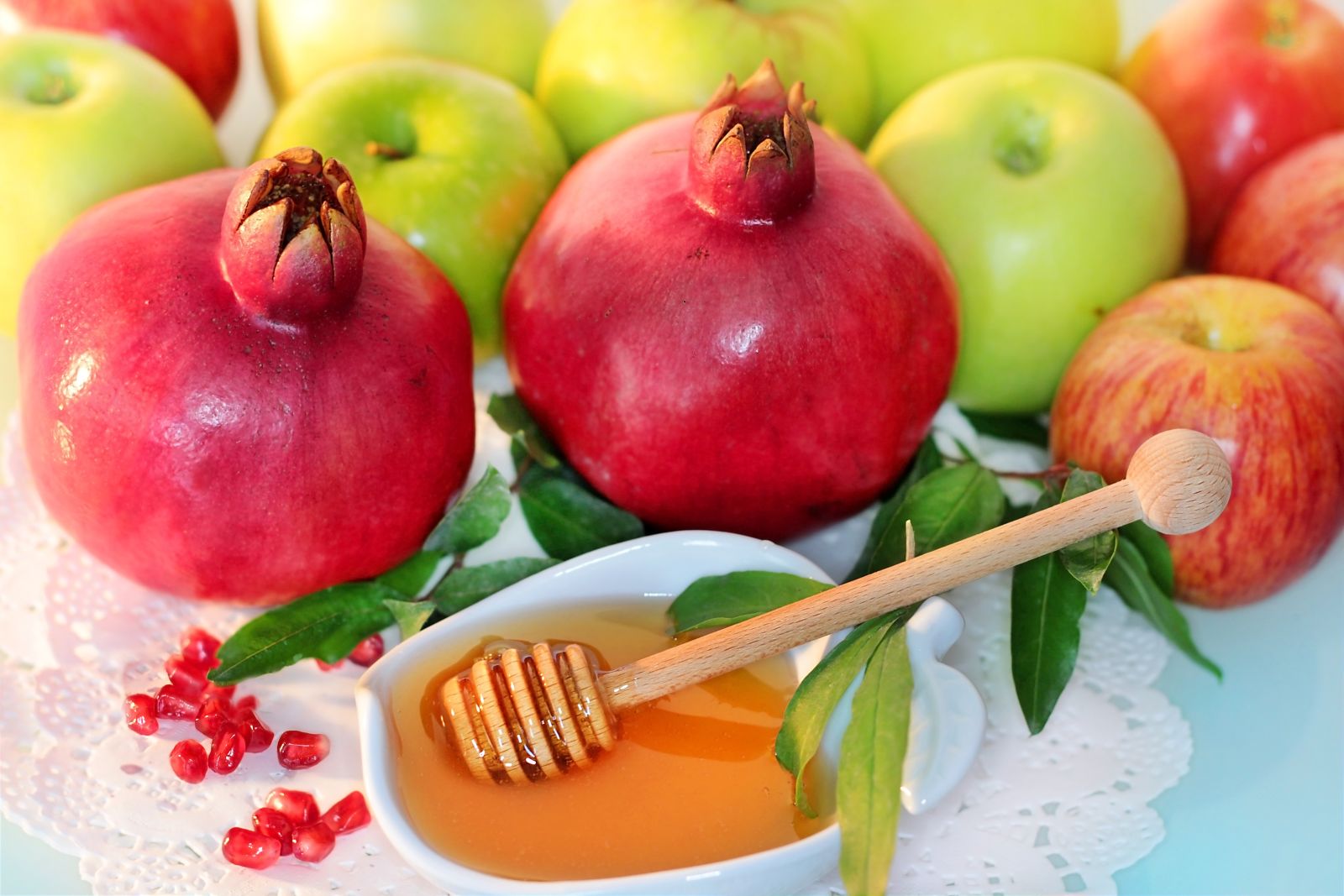 Sweet foods for a sweet new year. Photo via Shutterstock.com

Rosh Hashana literally means “head of the year” in Hebrew. In some Jewish communities it is traditional to eat the head of a fish (or lamb or chicken) during the holiday meal. Other communities don’t eat the fish head but display it on the holiday table.

The practice comes from a verse in Deuteronomy that reads, “God shall place you as a head and not as a tail.” In Ashkenazi communities, it is customary to eat fish – usually, gefilte fish – because fish is an ancient symbol of fertility and abundance.

The Ministry of Agriculture reports that on average, Israelis eat one kilogram of fish per month but on Rosh Hashana that number doubles. In the month of Tishrei, Israeli consumers buy 800 tons of carp compared to 250 tons in each of the other months; 750 tons of tilapia compared to 550 tons; and 250 tons of mullet compared to 170 tons monthly during the rest of the year. 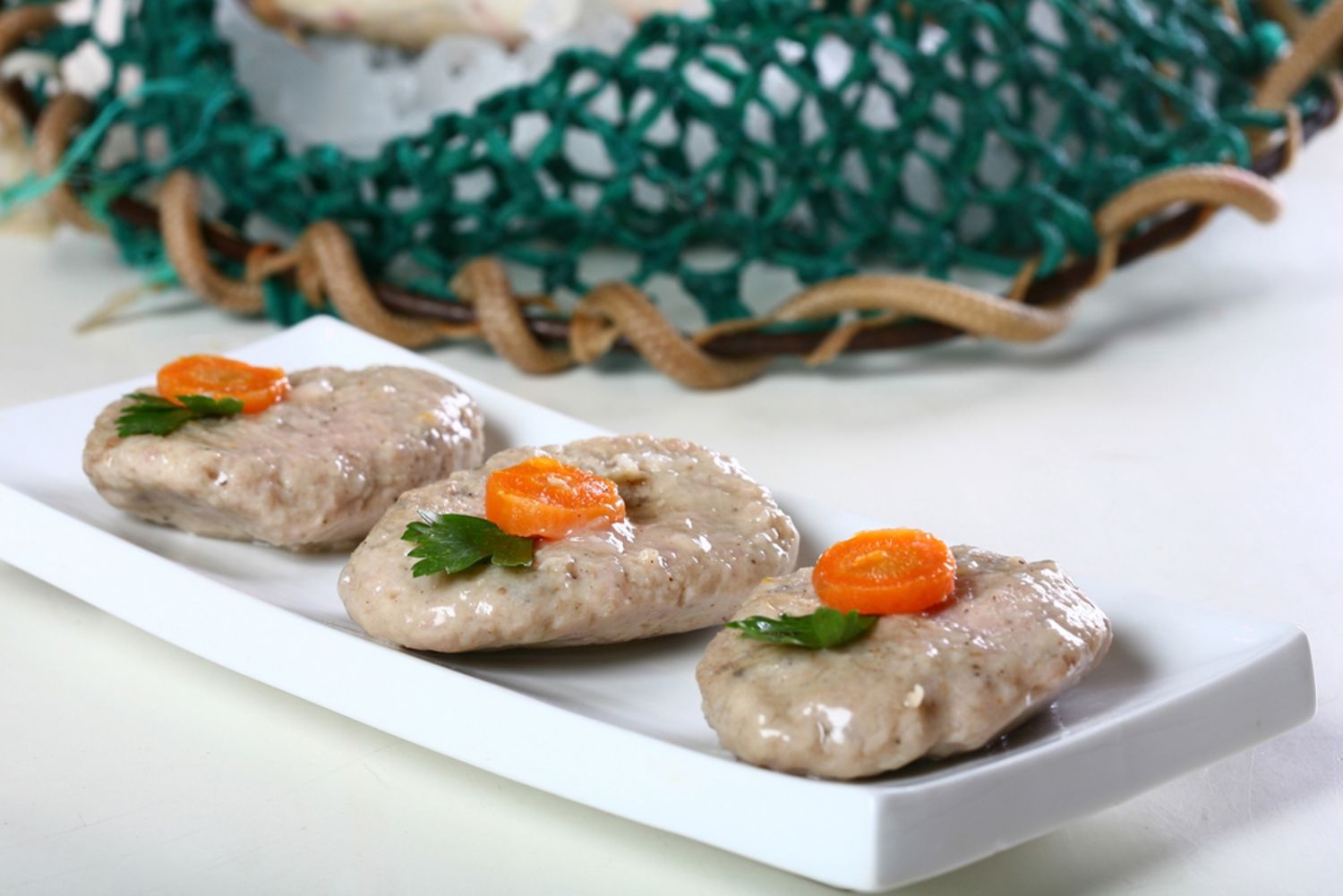 Rosh Hashana boasts numerous foodie rituals. Pretty much all communities steer clear of pickled foodstuffs (to ward off a sour year). Some traditions also call for an avoidance of nuts, as the Hebrew word egoz shares a numerical value with the word for “sin” (chet). But that still leaves a whole range of delicious foods to ring in the New Year.

It is customary to eat apples dipped in honey (sweet year ahead); pomegranates (the rabbis say there are 613 seeds in the fruit to coincide with the 613 commandments in the Torah); round challah (symbolic of the cyclical nature of the year); raisins (sweet new year); carrots (symbolic of increased good deeds); beets (symbolic of banishing enemies); and, of course, fish (see above).

Can you imagine celebrating New Year’s on July 1? Rosh Hashana may be the beginning of the year in Judaism, but it is celebrated in the seventh month of the Hebrew calendar. The Book of Exodus specifies that the springtime month of Nisan should mark the “first of the months of the year.”

So why are we celebrating now? Well, there are many interpretations. Mishnaic scholars taught that the meaning of the seventh month’s Babylonian name, Tishrei, is “new beginning.” According to the Mishnah, there are four New Year days in Judaism: 1 Nisan for the ascension of kings and the rotation of festivals; 1 Tishrei for civil years, sabbatical years, jubilees and the planting of herbs; 1 Elul (or 1 Tishrei, according to another opinion) for the cattle tithe; and 1 Shvat (or 15 Shvat, as we celebrate it today) for the trees.

According to the Talmud, the first day of Tishrei is the anniversary of the creation of Adam and Eve. 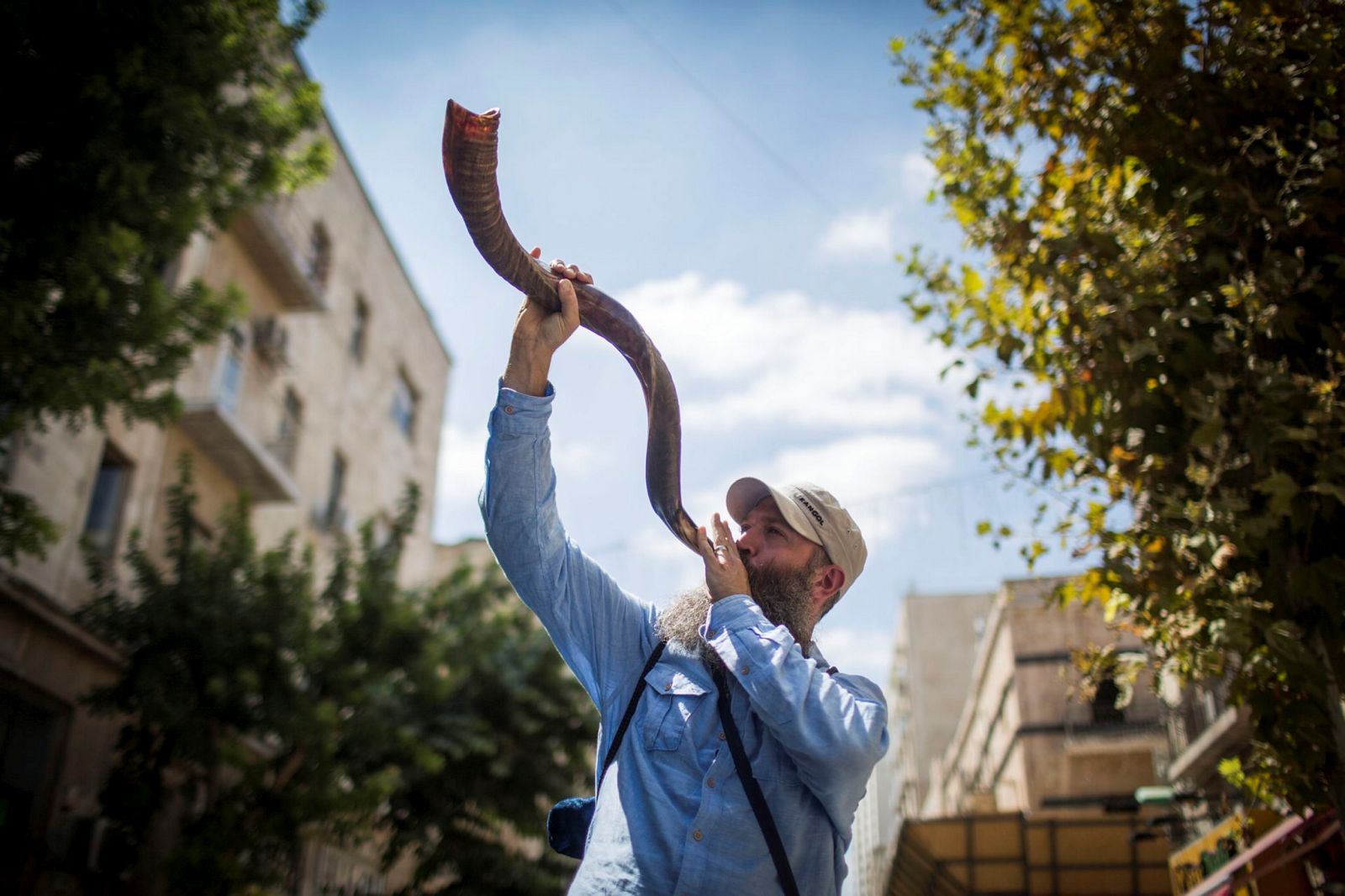 A tourist tries his hand at the shofar in Jerusalem. Photo by Hadas Parush/Flash90.

The shofar (ram’s horn) is an important part of Rosh Hashana as a call to repentance during the High Holy Days. For it to be considered kosher for use, it must not contain any cartilage. The Avi Chai Foundation in Jerusalem says most horns are cleaned with special machinery but that some believe the best method is to bury it and let the earth’s creepy crawlies eat away the unwanted tissue.

To keep your shofar clean and free of pungent odors, modern cleaning tips call for vinegar and hydrogen peroxide. One of the easiest ways to clean a shofar is with gravel (usually fish tank gravel) and a soft, round and pliable Nerf ball. The Nerf ball is used to cork the shofar’s wider opening after the gravel has been poured into the hollow horn.  It is important that the Nerf ball is pliable and soft so that it is easy to remove. 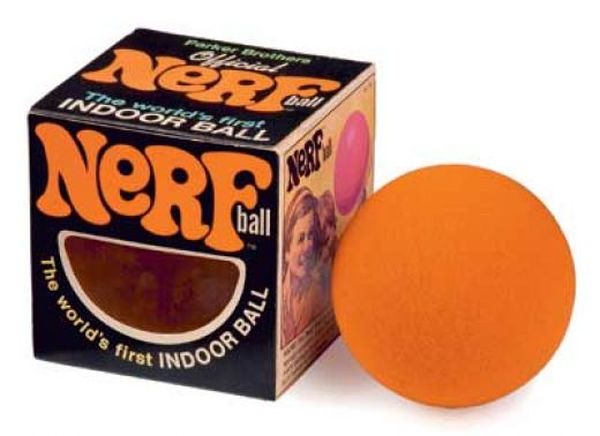 Rosh Hashana started out as a one-day celebration. But communication problems turned it into a two-day holiday.

The Jewish calendar is based on the lunar cycle and a new month begins when the new moon appears. One might think looking up in the sky was evidence enough of a new moon, but the ancient rabbinic council in Jerusalem (and later in Yavne) had final say on declaring the new moon and sending messengers throughout the land to inform the public. With a lack of cars, phones and computers, the news often arrived after the month had begun. By making the holiday a two-day affair, no one missed celebrating on time. The custom stuck even though in today’s world it is very easy to figure out when a new month begins.

Rosh Hashana has many names. The Torah refers to it as Yom HaZikaron, the day of remembrance (not to be confused with the Israeli Day of Remembrance for the Fallen Soldiers of Israel and Victims of Terrorism); or Yom Teruah (the day of sounding of the shofar). The holiday is also known as the Day of Judgment, as according to tradition it is on Rosh Hashana that God judges last year’s deeds and decides fates for the next year. The prophet Ezekiel is credited as the first to use the phrase “Rosh Hashana” although he was not referring to a holy day but rather the beginning of the year.

Rosh Hashana may be the Jewish New Year but there are no all-night parties or champagne kisses as you find on New Year’s Eve in the Gregorian calendar. On this New Year it is forbidden to work and most of your time is meant to be spent in the synagogue. The extra-long liturgy can be found in a special prayer book especially for Rosh Hashana.

Shana tova! May it be a good year!