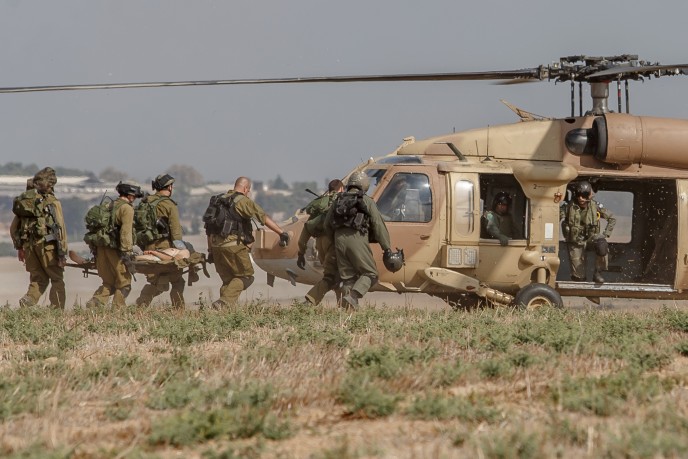 An injured Israeli soldier is evacuated by helicopter from near the Israeli border with Gaza Strip on July 21, following heavy fighting. Photo by Flash90.

An injured Israeli soldier is evacuated by helicopter from near the Israeli border with Gaza Strip on July 21, following heavy fighting. Photo by Flash90.

Some of the soldiers wounded in Operation Protective Edge are benefiting from a brand-new Israeli technology to close open wounds quickly and temporarily prior to further evaluation and treatment.

Just on the cusp of the market, the TopClosure 3S Trauma Management System is approved by regulatory agencies in Israel, the United States and Europe for mass-casualty situations such as combat and natural disasters. Soroka University Medical Center in Beersheva is using TopClosure for incoming injuries from the Gaza conflict, according to the technology’s inventor, Dr. Moris Topaz.

“We’ve been using it clinically already for a few years, collecting a lot of data to show the scope of applications,” says Topaz, chief of plastic surgery at Hillel Yaffe Medical Center in Hadera. “It’s changing the way we’ve been handling the closure of wounds to avoid further damage and contamination to the injured tissues.”

Until now, emergency protocol for a large open wound involved cleaning and suturing, then applying a skin graft. TopClosure instead enables stretching the edges of the skin over the wound with adhesive attachment plates placed on either side and secured with an approximation strap inserted into the first and then the second plate. This fast procedure also simplifies healing substantially, Topaz tells ISRAEL21c.

“When trying to close a wound with sutures, we apply high tension to the skin,” he says. “With TopClosure we can spread the tension on the skin about 100,000 times higher than we could do before.”

The device can be “zipped” open after the emergency situation has passed so the wound can be further evaluated and treated. This temporary wound closure system is meant to be used by medics, paramedics, surgeons and other physicians. Topaz is teaching orthopedic and hand surgeons how to use it.

“The most important thing about TopClosure is its simplicity,” says Topaz. “Doctors commonly say, ‘Why didn’t we think of this earlier?’ My wish is that it would be exposed to every doctor and every patient as an emerging technology that can be applied anywhere in the world without sophisticated plastic surgery procedures.”

UNCOVER ISRAEL - Get the ISRAEL21c
Weekly Edition free by email
Sign Up Now!
Bring Israel's story to life.
Millions of people around the world rely on us to gain a deeper understanding of Israel. We are the trusted source for original content you won't find anywhere else.
You can make a difference. Donate today to support journalism that brings Israel’s story alive.
SUPPORT ISRAEL21c
Read more on:   Health, Medical devices, TopClosure, Hillel Yaffe medical center, Wound care