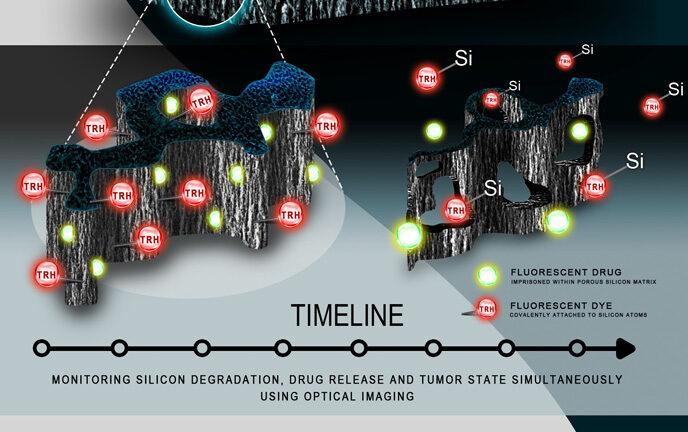 he image illustrates porous silicon particles used as a platform for the delivery of anticancer drugs (highlighted in green on the diagram) and its release at the targeted breast cancer tumors. The degradation of the PSi at the tumor microenvironment was investigated using novel imaging methods. (Photo: Technion’s Spokesperson’s Office)

A new Israeli-American study reveals that silicon nanomaterials for localized delivery chemotherapeutics behave differently in cancerous tumors than they do in healthy tissues. 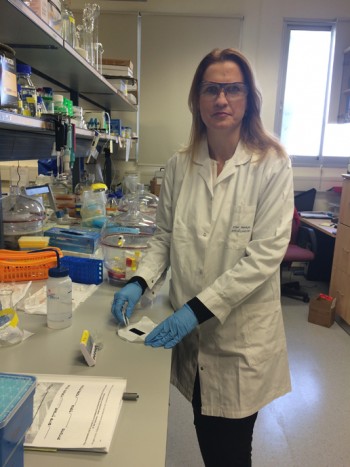 The findings from the joint study by the Technion, Massachusetts Institute of Technology (MIT) and the Harvard Medical School could improve targeted chemo drug delivery.

“We have shown for the first time that biomaterials in general, and nanostructured porous silicon in particular, behave differently when they are injected (or implanted) at the tumor microenvironment,” said Professor Ester Segal, who heads the Technion group that led the study. “Over the last few years we successfully engineered silicon to be used as a carrier of anticancer drugs that releases its contents in a controlled manner, and now we have focused on the degradation mechanism of the silicon at the diseased tissue.”

The important findings of the study, which investigated the behavior of the silicon ‘carriers’ in breast cancer tumors, is associated with the accelerated degradation of the silicon material in the diseased area.

The research showed that reactive oxygen species upregulated in the cancerous environment (in vivo), induce oxidation of the silicon, causing a rapid degradation of the ‘containers’ as compared with (in vitro) lab experiments. This process of nanostructured silicon degradation at the tumor microenvironment could allow for early and smart design intervention of the silicon structure to facilitate controlled release of the drug at the targeted site.

The study was published in the journal, Nature Communications. 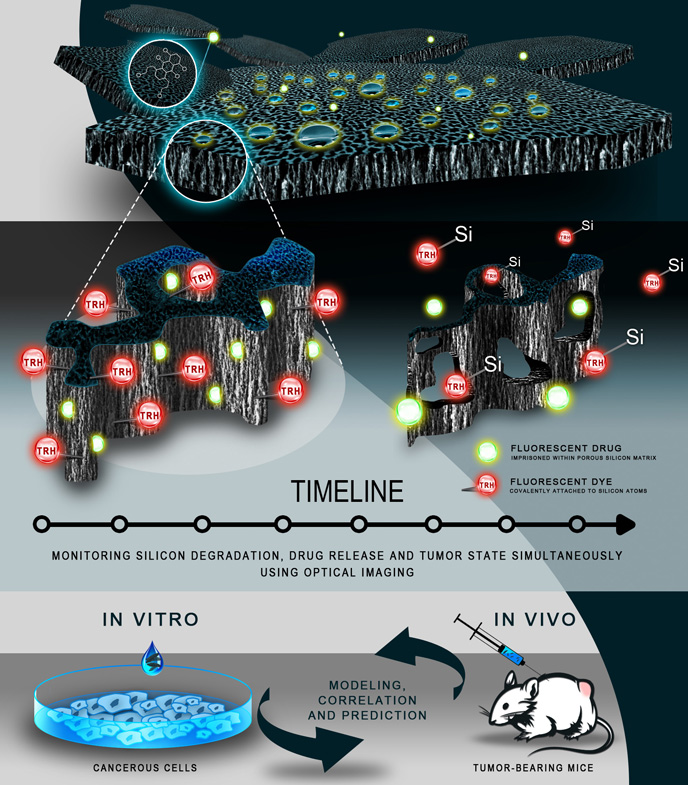 The image illustrates porous silicon particles used as a platform for the delivery of anticancer drugs (highlighted in green on the diagram) and its release at the targeted breast cancer tumors. The degradation of the PSi at the tumor microenvironment was investigated using novel imaging methods.
(Photo: Technion’s Spokesperson’s Office)
UNCOVER ISRAEL - Get the ISRAEL21c
Weekly Edition free by email
Sign Up Now!
Give
Every
Month
Help ISRAEL21c uncover
the Israel we love