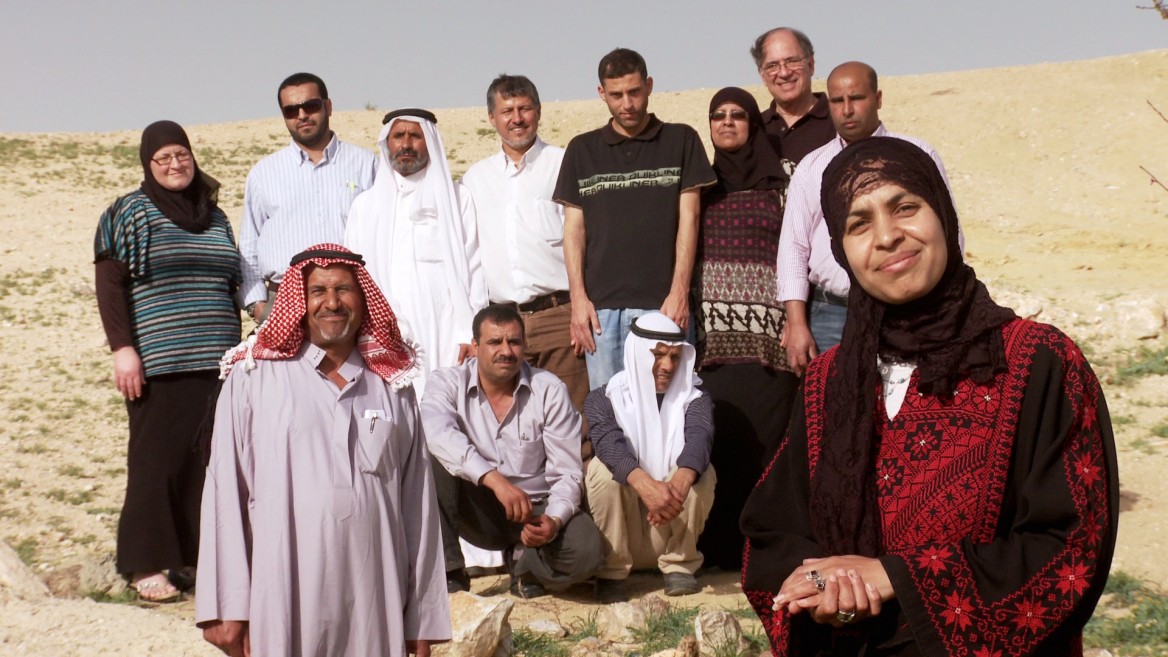 The founding members of the Wadi Attir Cooperative. Photo: courtesy 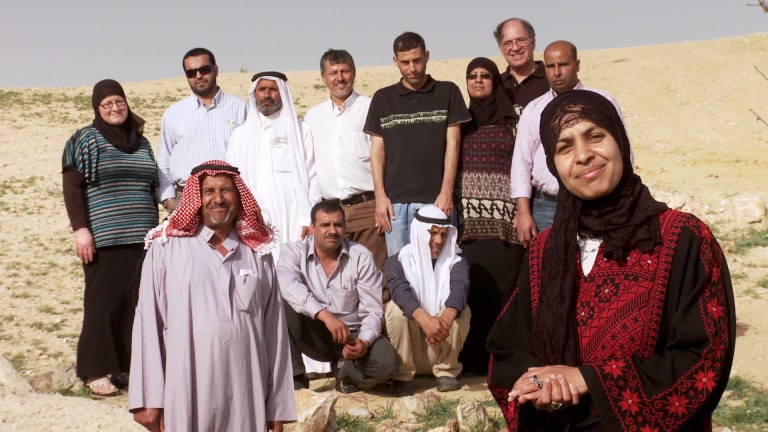 The founding members of the Wadi Attir Cooperative. Photo: courtesy

Sometimes it takes an outsider to see a solution to a difficult problem. In the case of Project Wadi Attir – a revolutionary sustainable agricultural and tourism initiative taking root in the Negev Bedouin community — the outsider was a former insider.

“I visited Israel in 2007 and went with a friend to the Negev to see the technologies being developed at Ben-Gurion University’s Blaustein Institutes for Desert Research,” says Michael Ben-Eli, the Israeli-born founder of The Sustainability Laboratory, a nonprofit in New York. He hadn’t been to this area since his army days in the 1960s.

“We also toured the Bedouin villages nearby,” Ben-Eli continues. “I was flabbergasted by all the unrecognized villages and the poverty. You have a road with all these fantastic technologies on one side that can solve so many problems, and on the other side all this misery — and nobody putting the two sides together.”

After finding enthusiastic and talented partners in the Bedouin community – foremost among them organic chemist Mohammed Alnabari, mayor of the Bedouin municipality of Hura — Ben-Eli convinced backers that here was the perfect opportunity to contribute to Bedouin wellbeing by putting his theoretical sustainability principles into action. 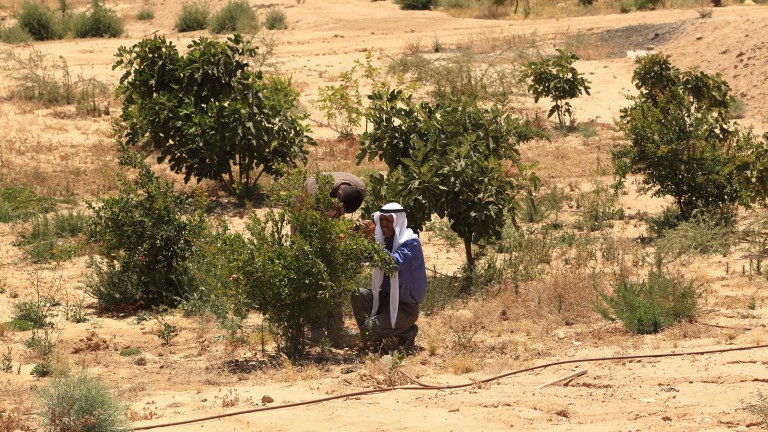 “Many excellent projects around the world come under the sustainability umbrella but tend to focus on one issue or sector, such as water or energy, women or poverty. We wanted a place that would give us enough freedom to define a whole-system approach and demonstrate it,” Ben-Eli tells ISRAEL21c.

This ambitious plan found a home in Wadi Attir, a barren 100-acre dryland scarred by soil erosion. Following six years of development under the 12 founders and five directors of the Wadi Attir Cooperative, Project Wadi Attir is transforming the land and the lives of area residents with initiatives in herding and dairy, growing and making products from medicinal plants, and reintroducing indigenous vegetables.

Everything on the site connects to an integrated system of green technologies for soil enhancement; solar and wind energy and bio-gas production; organic waste composting; advanced irrigation; and wastewater treatment and recycling.

“Many researchers at the university were interested in linking their research to something real for the benefit of their neighbors,” says Ben-Eli. “We spent a year and a half bringing together people and discussing the scope of the project and who would be involved.”

The project is managed by Hura businessman Yones Nabari, who agreed to volunteer his services for the first two years. Now this is his full-time job.

BGU Prof. Stefan Leu heads a dryland ecosystem restoration project at Wadi Attir, demonstrating methods of turning desertified land back into fertile soil. His crew planted 4,000 trees of 17 different species on the site to enrich the carbon content of the soil and capture water with their roots. They created low earth mounds to slow runoff, curb erosion and retain water on the site.

“This soil-enhancement program is already showing tremendous results,” says Ben-Eli. “When we started, it looked like a moonscape here, and now we have changed the flora and biodiversity of the site.” The plant life attracted cross-pollinating insects, which brought birds. Ducks found their way to the ponds of captured water. 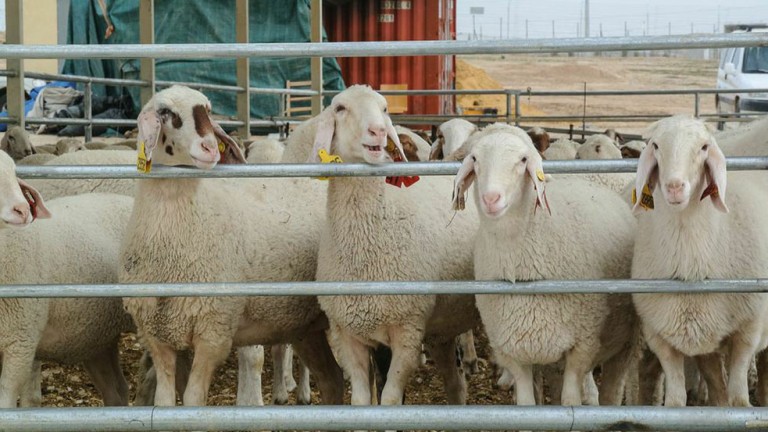 In the last three months, Wadi Attir welcomed 100 sheep and 150 goats. This initiative introduces modern, economically viable animal husbandry practices consistent with the needs of the Bedouin community. “We expect our first round of births in July,” says Ben-Eli.

Twenty-five local Bedouin women learned organic cheese-making, and a modern dairy plant onsite will double as a cooperative to help small area farmers find a market for their milk.

Groups of local women also are being trained at Wadi Attir to plant gardens full of seeds once indigenous to the area, with the aim of reintroducing organic vegetable sources of nutrition and income to Bedouin families. 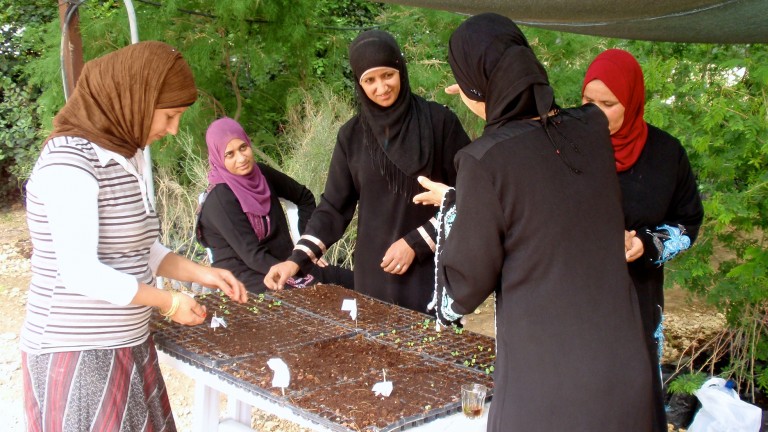 Bedouin healer Ali Alhawashla documented 38 desert plants used for medicinal purposes, and is cultivating 15 indigenous medicinal plants on a 20-acre plot to process into a wide range of remedies and cosmetics. He and project manager Eti Golan, a naturopath, clinical herbalist and entrepreneur, plan to write a guide to Bedouin healing practices in Arabic, Hebrew and English.

A visitor and training center, now in a temporary structure, provides a venue for eco-tourism and technical training and support in sustainability innovation, entrepreneurship, desert agriculture and animal husbandry.

“Wadi Attir is becoming an educational hub where many Negev high school kids come to do environmental and ecological studies,” says Ben-Eli. “When the entire project is operational, probably 70 people will be working in it directly, but it will have a much broader impact on the community and those who visit and learn from it.” 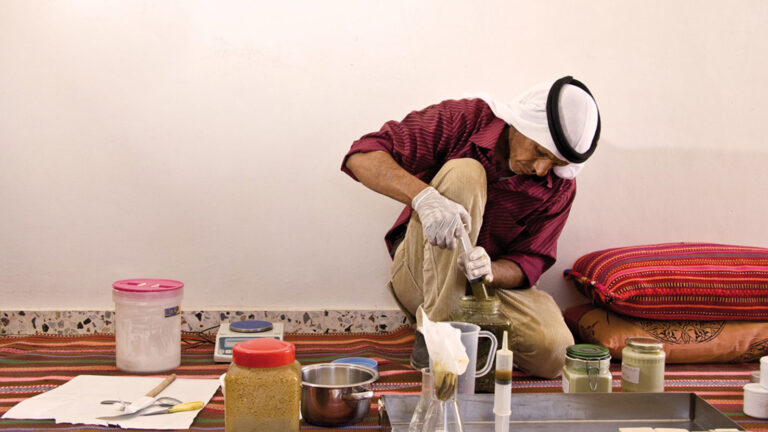 His goals for 2015 are to finish the visitors’ center, milking facility and dairy plant, fully implement systems for biogas, composting, gray-water reuse and solar energy, and develop commercial lines of dairy and herbal medicinal products.

Project Wadi Attir is supported by a broad coalition involving the Jewish National Fund (JNF); researchers from the Ben-Gurion University of the Negev, foundations and individual donors, as well as a government consortium led by the Ministry of Agriculture and Rural Development, and including the Ministry of Development of the Negev and the Galilee; the Economic Development Authority in the Minority Sector, the Prime Minister’s Office; and the Authority of Bedouin Settlement in the Negev.

Project manager Nabari tells ISRAEL21c that among the many other benefits Wadi Attir confers to area Bedouins is a stronger and closer relationship with Israeli governmental bodies and with organizations such as JNF.

He adds that the project is providing much-needed environmental education for area children and opportunities for Bedouin women to earn a living outside the home. “The women feel they are contributing to the community; they feel connected and that they matter,” Nabari says.