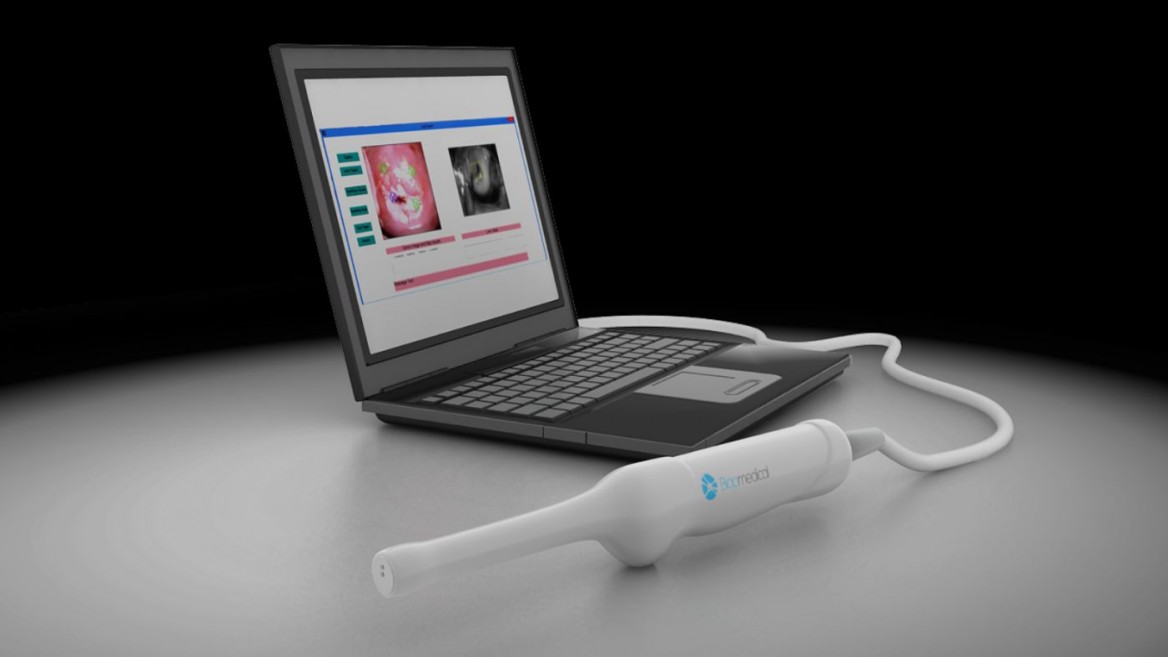 In the 1940s, George Papanicolaou’s Pap smear was introduced and became the standard cancer screening test for cervical cancer, then the number one killer of women and today the fourth most common cancer in women worldwide.

Incredibly, Pap remains the standard despite severe drawbacks. The smear must be sent to a lab for analysis (which takes several days), has a high rate of inaccurate results, and samples only the outer surface of the cervix although cancer begins in the inner layers.

Furthermore, the Pap test isn’t readily available in developing parts of the world such as India, Africa and China, where cervical cancer is still the leading cause of death among women.

The Israeli company Biop Medical is designing and testing a better alternative: a state-of-the-art colposcope, the instrument used to check women for gynecological disease. Colposcopy is usually performed after a positive Pap smear, and if it detects suspicious cells the woman must schedule a biopsy.

Biop’s device does everything in one visit. It optically scans the inner layers of the cervix for early signs of cancer, analyzes the images instantly and indicates where to perform a biopsy if necessary.

That takes away the anxiety of waiting for results or for a colposcopy and biopsy appointment, during which time cancer could spread.

“Our device extracts optical features from the cervix and sends them to the cloud in real time to analyze them, all at the point of care,” says Biop Medical founder and CEO Ilan Landesman. “Biop tries to find the disease at very early stages and this has a real value because it can give enough time to treat it successfully.”

The product is undergoing clinical trials in Israel and Hungary into next year. The company expects to apply for CE (Europe) and FDA (US) approval in 2017.

Meanwhile, another Israeli invention for early cervical-cancer detection is being developed at Illumigyn, a company headed by Ran Poliakine of Powermat fame. Illumigyn’s Gynescope colposcope will use proprietary imaging technology to deliver 15-micron image resolution over a wide field of view, along with advanced illumination features and the ability to capture, send and store high-definition images and videos taken during the exam.

When Landesman and his wife lost a close friend to cervical cancer, they learned the tragic ripple effects of the disease.

“Cervical cancer strikes mainly women between the ages of 18 and 35, so it can devastate young families,” Biop Medical head of operations Tal Bar Tur tells ISRAEL21c.

Founded in 2013, Biop Medical was in the first cohort of IBM’s AlphaZone accelerator program in Israel, and was presented at the Cleveland Clinic’s Medical Innovation Summit at the end of 2014.

“We have tremendous help and cooperation with IBM,” Landesman tells ISRAEL21c. “Using IBM Cloud and Analytics tools, we were able to develop a big-data point-of-care solution that sends information as it scans.”

The device scans the cervix in about 100 segments, using more than 20 optical features on each segment to achieve high specificity. “We integrate those segments into a map to show the practitioner the suspicious area,” he explains. “Our optics are able to observe what is happening at a cellular level throughout the full depth of the cervix.”

Dr. Rami Eitan, chief of gynecologic oncology Rabin Medical Center in Petah Tikva, headed a clinical trial of Biop’s device last year; the results were published in the Journal of Obstetric and Gynecological Investigation on March 10. Eitan now is enrolling 50 patients for a second trial.

“We have a problem with technical evaluation of the cervix even by colposcopy,” Eitan tells ISRAEL21c. “We sometimes don’t see very small lesions, or misinterpret non-lesions. The optical means Biop Medical has chosen probably is one of the best ways to advance our diagnostic ability.”

The Biop device was designed by a multidisciplinary team from the areas of physics, optics, biology and software. Headquartered in the Tel Aviv suburb of Ramat Gan, the company recently raised $2.25 million in a Series A investment round led by Shanghai Creative Investments of China.

“We have a team of 12 extraordinary people,” Landesman says, “and an advisory board of top gynecologists in the United States and Israel. We’re fortunate to have Sidney Braginsky, former CEO of Olympus America, as our president.”

The mobile device also could be used in remote areas and requires only a short training to be used by any healthcare provider, says Bar Tur.

Biop Medical’s product is not in competition with the award-winning EVA optical assessment system for cervical cancer screenings developed by Israeli company MobileODT specifically for developing countries, using a smartphone camera to capture and securely transmit the images for diagnosis and analysis.

Rather, Biop is positioned as a high-end manufacturer of colposcopes, says Landesman. Its optical technology could be adapted for identifying other types of epithelial cancer, such as oral, esophageal, rectal and bladder.

The optical technology in the Biop probe could be adapted into systems to screen for other types of cancer. Photo: courtesy