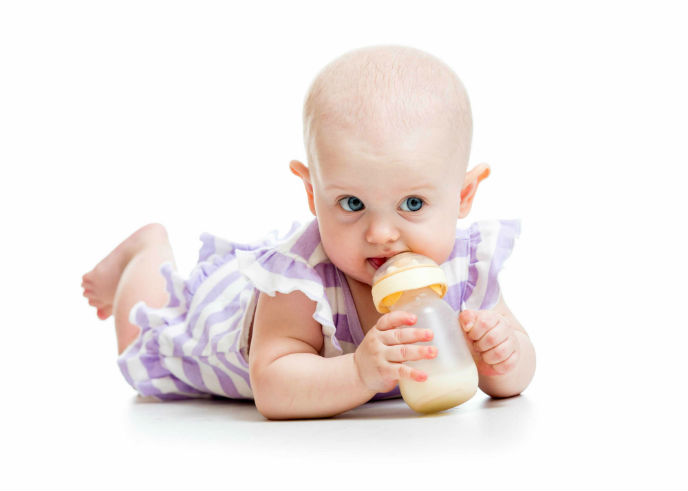 Up to half of all infants fed baby formula suffer gastro distress, skin rashes, respiratory problems and other signs that they can’t tolerate cow’s milk. The only alternative, soy formula, is a last resort because of possible hormonal effects of its powerful phytoestrogens.

A new vegetable-based product called INDI (Innovative Non Dairy Infant formula), developed by two Israeli baby-food executives, could provide parents across the world with a long sought-after option containing neither cow’s milk nor soy but delivering all the nutrition required by international regulations.

“When I worked for Similac, I saw that 50 percent of moms were switching formulas all the time because their babies were having symptoms of one kind or another, and the doctors really don’t have anything to tell them,” says Yitzhak, who was one of the first to alert the world to the hazards of BPA plastic in baby bottles.

Kesler experienced the problem firsthand when his granddaughter couldn’t stomach regular formula. He made her a drink out of nutritious almond paste – not watery store-bought almond milk — that she liked and tolerated well. He wondered why almonds weren’t being used in the huge and growing baby-formula market, which rang up nearly $30 billion in sales during 2013.

“About 130 million babies are born each year,” Kesler tells ISRAEL21c. “For their first three years, they are consuming mostly milk-based nutrition from one resource – the poor cow – and on the margins you have soy-based formulas.”

The time was right for a whole new approach.

Milk shortages are looming worldwide as millions of people in Asian countries add dairy to their diet. Another grave consequence of this unprecedented demand is the need for feeding ever more antibiotics and growth hormones to dairy cows as they are stretched well beyond their natural limits for milk production, explains Kesler. At the same time, evidence is mounting that cow’s milk was never an ideal food for human babies.

Kesler and Yitzhak rented space at the Technion-Israel Institute of Technology’s small-scale industrial facility and began experimenting with almonds, using Heart profits to finance their trials.

“We tried a few other ingredients and finally found another plant, whose identity we cannot yet disclose, which in the right ratio with almonds gives us what we need,” says Kesler. “Our unique combination of two plant sources, in the right proportion, gave us the answer.”

They then spent nine months transforming their novel plant-based blend into a dissolvable powder that mixes well with the right amount of water and has an appealing taste, texture, color and viscosity.

Kesler and Yitzhak got a thumbs-up for their formula from experts including Dr. Ron Shaoul, head of pediatric gastroenterology and nutrition at Rambam Healthcare Campus in Haifa, and chief dietician Brigitte Kohavi from the Safra Children’s Hospital at Sheba Medical Center in Tel Hashomer.

In talks with baby-formula companies

Shaoul tells ISRAEL21c that he welcomes an alternative for babies who cannot tolerate milk-based formula or whose parents prefer a vegan option without soy.

“Commercial preparations such as soy milk, rice milk or almond milk, or various homemade vegetable-based ‘milks,’ are not suitable for infant feeding and may damage a baby’s growth and development and result in severe situations of nutritional deficiency,” he says.

“In recent years, there is a worldwide tendency to avoid dairy, and soy today is the main alternative to dairy products,” Shaoul continues.

“Soy contains 40 times the amount of phytoestrogens as breast milk. Concerns have been raised that phytoestrogens may have an adverse effect on infant and child health in the areas of growth, sexual maturation and development, bone health and impact on thyroid function. Therefore, we need an herbal alternative that will satisfy babies’ nutritional needs. And that’s the idea of INDI.”

The patent-pending formula is now being produced in limited quantity at an infant formula manufacturing site in Germany, for the purpose of clinical tests for safety. Kesler says additional funds are needed to complete these trials.

The founders have already had preliminary conversations with leading infant-formula producers.

“We are going for the whole market, to offer a general substitute to milk and soy,” declares Yitzhak. “The change will happen; an alternative will be needed in the next 10 years. The question is who will be the first to market.”