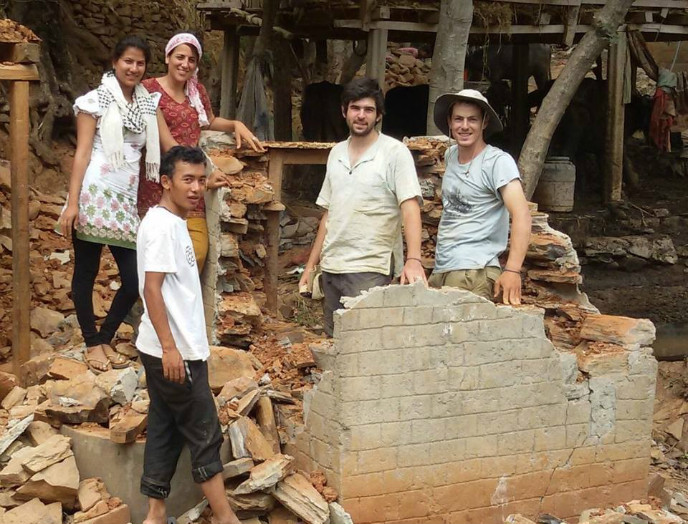 When Israeli trauma specialist Naomi Baum arrived in the Nepal village of Mahadev Besi on May 4, not one of the 80 families still had a roof over its head. The April 25 earthquake destroyed every house.

“Some houses are standing and some are rubble, but they’re all uninhabitable. Everyone is living outside,” the Israeli psychologist tells ISRAEL21c.

The retired founder-director of the Resilience Unit at the Israel Center for the Treatment of Psychotrauma of Jerusalem’s Herzog Hospital went to Nepal for a week with the center’s Nili Lavi at the request of Tevel b’Tzedek, an Israeli NGO involved in community development in impoverished Nepal villages since 2007.

They assessed needs and provided psychological support to Tevel’s paid staff and volunteers (some of whom lost relatives and homes in the quake), to Israel Embassy employees and to the villagers Tevel is assisting.

In Mahadev Besi, Baum and Lavi taught stress-busting techniques to two groups of 40 local women, using hastily prepared copies of their resilience workbook translated into Nepali. She reassured them that their tears and fears were normal, and no different than those of disaster victims she’s counseled in Israel, Haiti and New Orleans. She aimed to impart a sense of hope along with the information. 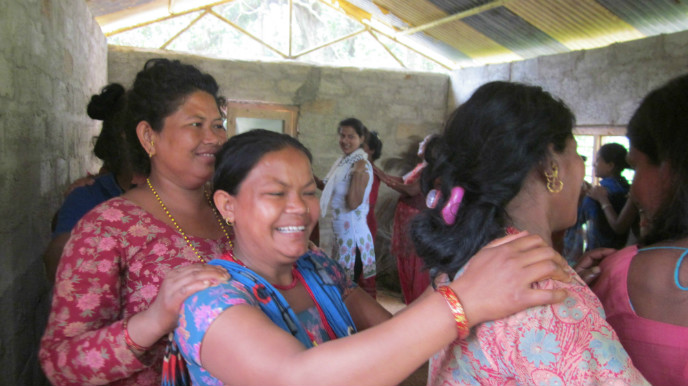 “I also heard again and again their fear of the next quake. We helped them address that fear by letting them know that everyone was feeling this way,” says Baum.

Indeed, their fears were realized when another strong quake hit the region on May 12, the day Baum and Lavi landed back in Israel along with the Israel Defense Forces’ medical delegation. Trauma center staff in Jerusalem will remain in touch with Nepal’s mental health authorities to offer assistance, according to Herzog Hospital spokesman Stephen Schwartz.

Tevel b’Tzedek founder and director Micha Odenheimer tells ISRAEL21c that the organization is providing urgent necessities – such as rice and tin roofing material — to 3,400 families (20,000 people) in the four most badly damaged villages in which the NGO regularly provides aid.

This video shows Tevel b’Tzedek volunteers and IDF engineers assessing damage to buildings in the Kalimati slum where Tevel has been working for many years.

“Now we are also building latrines. That’s really important before the monsoons arrive in June come because of the danger of cholera,” says Odenheimer.

“After natural disasters and displacement there is an increased risk of disease and widespread illness. To prevent outbreaks in our working areas, we are promoting healthy living by distributing hygiene supplies and conducting campaigns about the need for tooth-brushing and hand-washing.”

Tevel brought medical teams from two other Israeli NGOs, Natan and IsraAID, to tend the villagers physically, and volunteers such as Baum and Lavi to provide psychosocial support.

“We will continue to do workshops on resilience and talking about feelings. People who’ve experienced trauma find it more difficult to act quickly and we’re training to get them past feelings of paralysis and fear,” says Odenheimer, who was there for 10 days.

Tevel is creating temporary learning spaces because schools will stay closed for at least another two weeks. “It’s important to keep kids in a routine that helps them recover from trauma and to keep them away from playing in rubble, while giving parents a chance to get their lives together.” 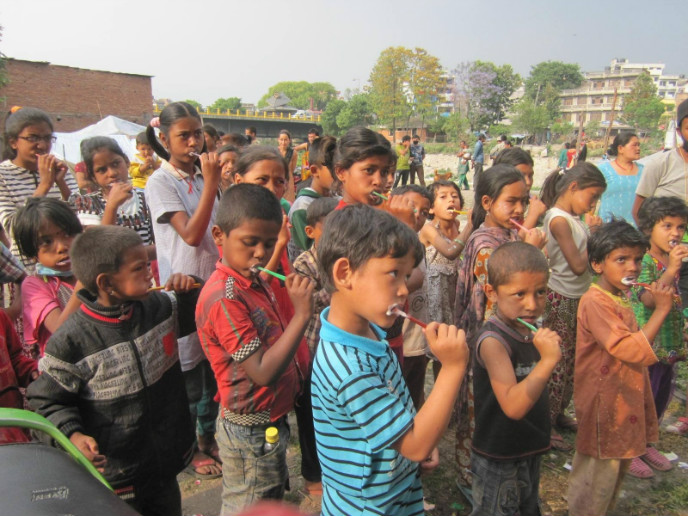 Bishnu Chapagain, the Nepali director of Tevel’s activities in Nepal, earned his PhD in plant science in Israel at Ben-Gurion University of the Negev. His agricultural training is critical to Tevel’s long-term project to introduce Nepali farmers to Israeli farming practices. 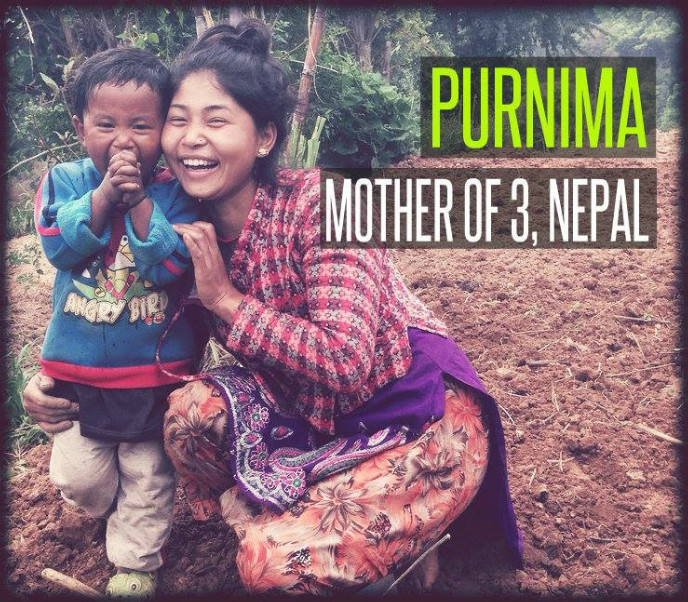 Manegau villager Purnima, whose photograph was snapped after gathering crops in her family field. Photo courtesy of Tevel b’Tzedek

Caring for Nepalese in Israel

Three days after the deadly April 25 earthquake, Prof. Richard Isralowitz of Ben-Gurion University’s social work school got a call for psychosocial assistance from the director of the Arava International Center for Agricultural Training, where 116 Nepalese citizens are taking a 10-month training course on advanced farming techniques.

The students were distraught over the tragedy in their homeland but their families had urged them to remain in Israel. Every one of the trainees found out that their houses were destroyed, and many were grieving the deaths of relatives and the loss of valuable livestock. Ten young mothers in the class were consumed with worry for their children.

The next morning, Isralowitz arrived with two colleagues, Prof. Orly Sarid and Dr. Dorit Segal-Engelchin, director of BGU’s Center for Women’s Health Studies and Promotion. They discussed stress, stress responses and coping strategies, and then led art-based intervention sessions developed at BGU as an effective way for trauma victims to share and normalize emotions and fears.

“It was a moving experience,” Segal-Engelchin tells ISRAEL21c. “We spent four hours with them and they were very grateful.” 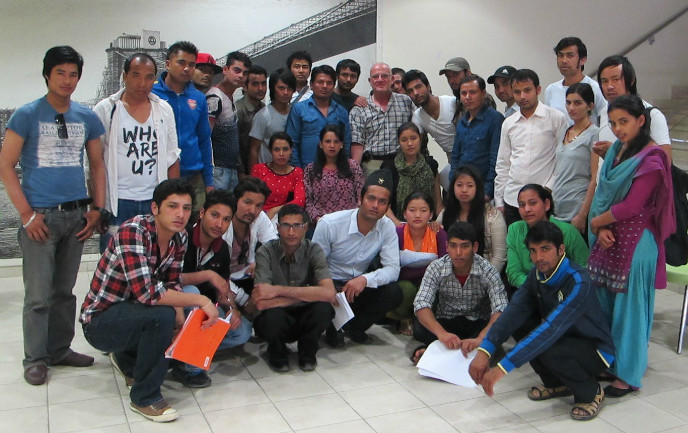 BGU Prof. Isralowitz, center, with some of the 119 Nepali students receiving psychosocial support in Israel. Photo by Dorit Segal-Engelchin

In the art sessions, all 116 participants chose to participate in drawing what they were stressed about. Many drew dead people and animals, destroyed schools and houses. After talking about the pictures, they drew depictions of coping resources. Finally, the students were asked to integrate the two drawings into one.

“We asked them to assess their level of stress from 1-10 before and after the intervention,” says Segal-Engelchin. “We saw an amazing, statistically significant, reduction in stress levels among all participants, proving that this tool is effective even for those exposed to trauma indirectly.”

One of the participants prepared a PowerPoint presentation showing how Nepal looked before and after the earthquake and “kept relating to Israel as a source of inspiration for building something from nothing,” she relates. “He encouraged them to use this disaster as an opportunity to better their lives and make changes by bringing home the knowledge they are acquiring in Israel.”

UNCOVER ISRAEL - Get the ISRAEL21c
Weekly Edition free by email
Sign Up Now!
Bring Israel's story to life.
Millions of people around the world rely on us to gain a deeper understanding of Israel. We are the trusted source for original content you won't find anywhere else.
You can make a difference. Donate today to support journalism that brings Israel’s story alive.
SUPPORT ISRAEL21c
Read more on:   Arava International Center for Agricultural Training, Naomi Baum, Micha Odenheimer, Israel Center for the Treatment of Psychotrauma, Tevel b'Tzedek, Ben-Gurion University, Social Action, Israel aid in Nepal