Piven with two of his works. Can you guess which leaders they are?

Piven with two of his works. Can you guess which leaders they are?

“My name is Hanoch and I play.”

That’s how Israeli artist Hanoch Piven begins a TEDx Talk  explaining how playing with objects – especially food – led to his signature collage caricatures gracing the covers of TIME, Newsweek, Rolling Stone, The New York Times, The Village Voice, The London Times, Die WeltWoche, Haaretz and other major publications over the past two and a half decades.

“What did I learn from 20 years of playing with bananas? I learned that all artists play, because playfulness is a fertile ground for creativity,” says the amiable illustrator, who divides his time between Jaffa and Barcelona.

“Serendipity” may as well be Piven’s middle name. When TIME commissioned a portrait of the TV cartoon character Homer Simpson in 2002, his early efforts landed in the trash can. Looking more closely at that can, he realized it resembled Homer’s mouth. This was the result: 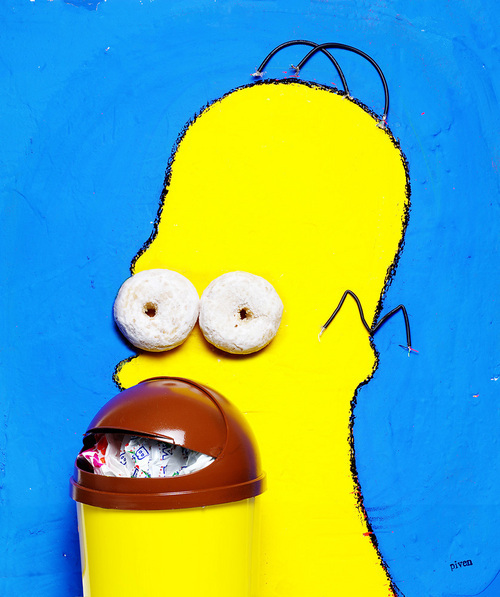 Piven says it’s important to allow yourself to fail. “Once you are there, the failures lead to success. Happy accidents are the greatest gift … but you need to train yourself to see them.”

Half illustrator, half standup comedian

Since 2003, Piven has been traveling to classrooms and boardrooms across the world, explaining his approach to creativity and communication. He’s led workshops for children in oncology wards, drug addicts in halfway houses and army veterans suffering from PTSD. Google for Education is one of his sponsors.

In cooperation with Israel’s Ministry of Education, he is in the midst of a speaking tour reaching 1,000 Jewish, Muslim and Christian preschool teachers from north to south.

Piven is creative director of an online community of educators in Spain, and has lectured in art institutes in cities as diverse as Beijing, Pasadena, Toronto, Rome and Savannah. His workshops in inner-city schools such as Tel Aviv’s Bialik-Rogozin and Arts High in Newark, New Jersey, are enthusiastically received.

Born in Uruguay, where he drew childhood pictures of cows, steaks and horseback gauchos, he moved to Israel at age 11 and grew up in Ramat Gan. Though he was always sketching caricatures — first of teachers and later of army commanders — his artistic inclinations weren’t taken seriously.

“Nobody noticed I had talent worth developing,” he tells ISRAEL21c. “I gradually stopped drawing because I was not encouraged to become an artist, mainly because I was a good student. When I finally wanted to do something about it, and listen to my own voice, the technical aspects of my talent were not good enough.”

Indeed, Piven was rejected from Bezalel Academy of Arts and Design in Jerusalem at age 23, after his military service. Dogged by “a deep craving for meaning in my life,” he then applied successfully to New York’s School of Visual Arts.

“I have this inner courage-slash-irresponsible nature. At 24, to go to New York and study in a private school without money to pay for it was irresponsible, but I guess I felt like yihye b’seder [it will be fine], and it was.”

The other students were better at drawing, so Piven forged a new path. “Being blessed by hardship made me look outside, and I started doing collages.” 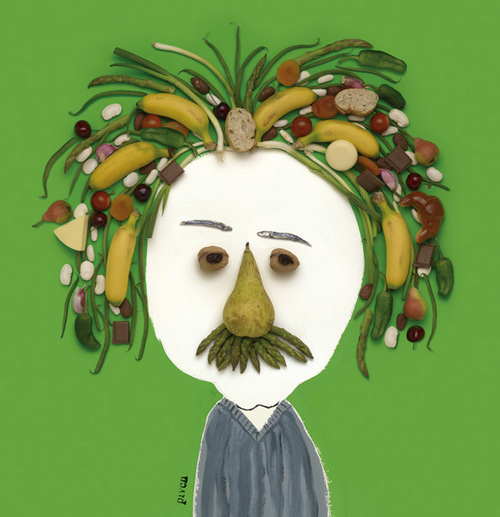 Only days after graduating in 1992, Piven presented his collage portraits at Newsweek, and was asked to design a cover portrait of presidential candidate Ross Perot.

That piece never got published, but soon afterward his illustration of Vice President Dan Quayle appeared in Entertainment Weekly, and the assignments began rolling in.

“Within the first year after graduation I was published in all the major publications,” Piven says. “In New York, there is an open door to new talent. Once they see something groundbreaking and different, they immediately finding a way of using it. New York was essential to my professional growth.”

Pushed out of the box

And yet, he continues, “If I would I have stayed in New York, I still would have been doing kind of the same thing. The American market is so niche-oriented, and there is so little cross-disciplinary activity, as opposed to what happens in Israel,” Piven says.

“When I came back to Israel, people started saying, ‘You do A, but it looks like something that could be Z. Can you do Z?’ I constantly get help diversifying and finding other applications for my work. That has been the greatness of coming back here and why I still love to work here.”

Piven is married to a New Yorker and has an English- and Spanish-speaking household. His son, now 20, is in college in the United States. His daughter, now 15, attends an international school in Barcelona.

Perhaps the Piven family’s situation helped inspire his 2012 crowd-sourced mural, “Family Matters,” installed at Beth Hatfutsot-Museum of the Jewish People in Tel Aviv. It’s made up of about 3,000 collage self-portraits done by visiting families in the style of Piven’s famous works.