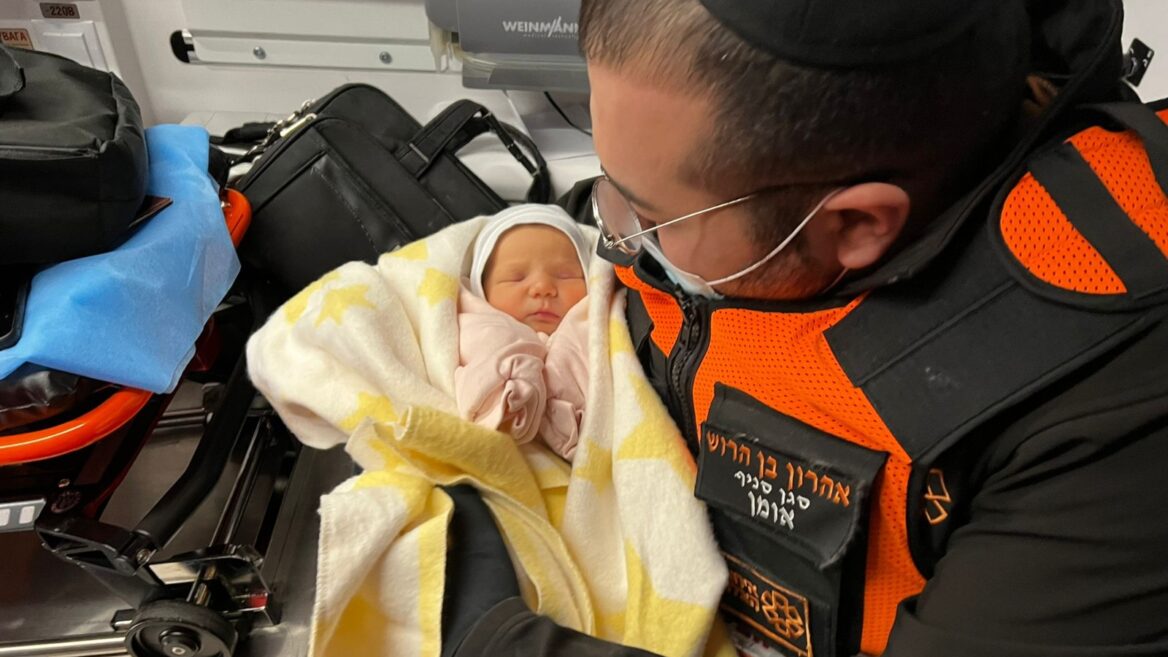 Aharon Ben Harush, United Hatzalah’s deputy commander of the relief mission to the Ukrainian-Moldovan border, in an ambulance with one of the Israeli newborns he helped rescue from war-torn Kyiv. Photo courtesy of United Hatzalah

A complicated rescue mission that involved four countries, multiple teams, and two full days of effort on my part, and the part of many others, came to fruition.

On Friday night in Chisinau, just before Shabbat, I received a phone call from my father-in-law Eli Beer, the president and founder of United Hatzalah of Israel.

He told me that there is a two-day-old baby whose mother is in Israel and that the baby needs to be rescued from Kyiv.

“You must drop everything and assist in this matter,” he told me.

This was to be the beginning of a 36-hour expedition without sleep.

I got the details that I needed to mount the rescue mission. Our team, which is based here in Moldova’s capital city, is providing humanitarian aid and emergency medical care to Ukrainian refugees coming across the border.

However, as we know from our experiences in Israel, as well as in other international relief missions, when something needs to be done quickly and lives are at stake, we step in wherever we can.

In this case, a baby girl had been born to a surrogate, with the biological mother residing in Israel. After the baby was born, the surrogate had abandoned the baby in the hospital and left the country due to the war.

The nurse in charge informed us that if we didn’t take the baby by 9am on Saturday morning, she would be placed in an orphanage. Staying in the hospital was simply unsafe.

Instead of enjoying the Shabbat meal with other members of the United Hatzalah mission who were returning from their efforts at the borders, I began phone calls to no less than 29 local ambulance companies.

After a few hours, I succeeded in locating a company that was willing (for a large sum of money) to proceed to a meeting point 80 kilometers (50 miles) from Kyiv, but they refused to enter Kyiv due to the heavy shelling taking place there.

Thus began a secondary rescue operation to evacuate the baby from Kyiv to the meeting place.

Arduous journey for a newborn

Through various connections, I succeeded in finding a doctor who was willing to help and took the baby, under armed escort, to the meeting place.

During this time, the arranged meeting place with the ambulance company had been changed due to bombing attacks in the region. After eight hours, the baby reached the ambulance I had hired.

For an additional nine nerve-racking, tense, hours involving tons of phone calls and coordinating, the baby safely reached the border with Moldova.

Together with Israel’s Foreign Ministry representative Itzik Kagar, who committed to helping us here, and with the assistance of former Israeli ambassador to Ukraine Joel Lion, we obtained all the necessary documents to have the baby transferred to our care in Moldova.

The border police, who by now have gotten to know us pretty well, were also informed and coordinated together with us on the operation.

The mission was accomplished — the baby crossed the border. United Hatzalah volunteer EMT Vicky Tiferet, a mother of four, and I, received the baby. 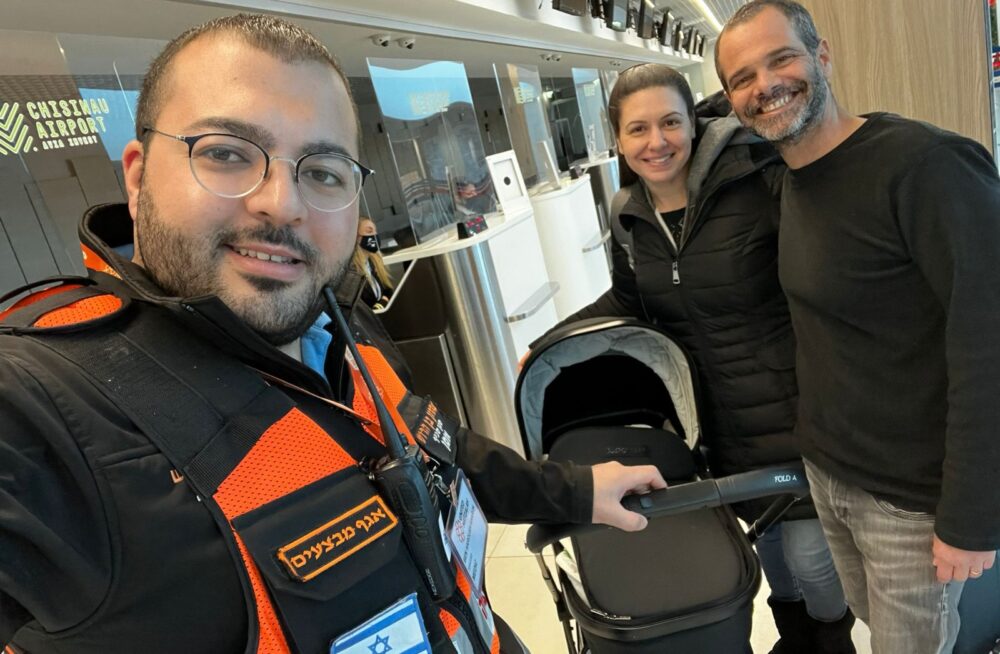 However, the problems were not yet over. We drove toward the Romanian border since the Moldovan airport adjacent to the Ukrainian border was closed to air traffic.

Vicky and I were interrogated at the border, which was to be expected – after all, they wanted to know what we were doing with a three-day-old baby who had no connection to us.

One emotional meeting followed by another

Thankfully, after 10 additional hours, we arrived at the Iasi airport in Romania on Monday morning, where we waited for the mother and father who were arriving on a special flight from Israel, arranged by United Hatzalah.

The flight was coming into Romania together with additional medical teams and supplies for our mission in Moldova.

The reunion was tearful for all involved. A complicated rescue mission that involved four countries, multiple teams, and two full days of effort on my part, and the part of many others, came to fruition.

But while the challenges for this family were over, another family’s challenges were just beginning.

Onboard the flight from Israel was a second set of parents coming to rescue their surrogate child. Their child was also born to a surrogate in Kyiv. With my assistance, they were hoping to retrieve their child as well.

I had to go back to work.

I cannot provide the details of the entire operation since they cannot yet be published, but after 28 hours the second baby, an infant girl, was also, thank God, on her way to Israel. 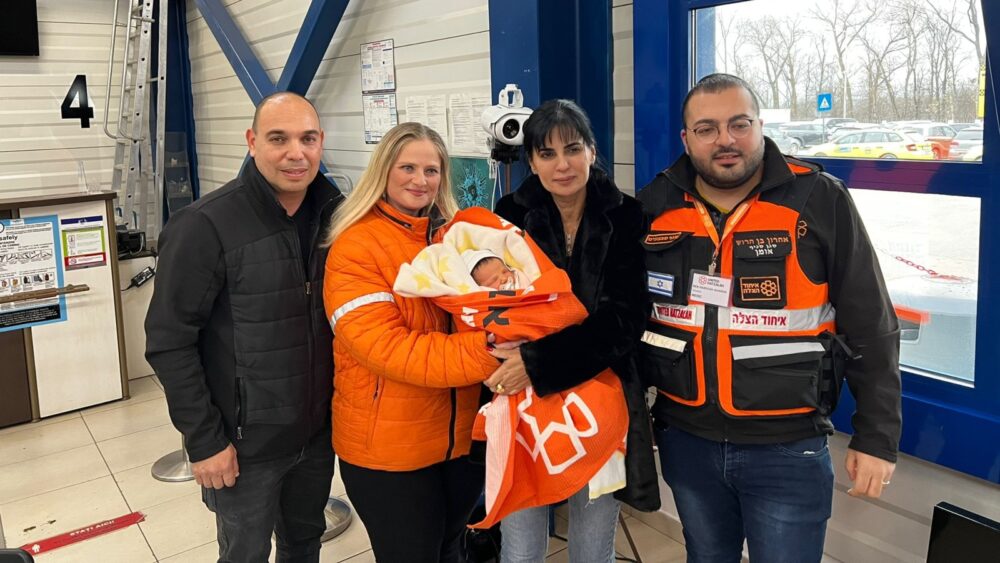 Aharon Ben Harush, United Hatzalah’s deputy commander of the relief mission to the Ukrainian-Moldovan border, right, and UH volunteer Vicky Tiferet, second from left, with the Israeli parents of a baby born to a Ukrainian surrogate. Photo courtesy of United Hatzalah

The tears of joy and delight of both sets of parents moved and deeply affected us all.

I have organized many different operations in my life, but this is definitely one that I will never forget as long as I live.

Saving two newborn infants, stuck in the middle of a war, is something that will stay with me forever.

I cannot explain the feeling I have when I look back on the events from this past weekend, but the work put in, and the humanity shown by all involved, was simply mind-boggling.

I’m delighted that two sets of parents have been united with their babies. I’m proud and excited to be part of the United Hatzalah rescue mission helping the refugees from Ukraine however old, or young, they are.

Aharon Ben-Harush is a United Hatzalah volunteer EMT from Israel. He left his recently married wife in Jerusalem to act as deputy commander of United Hatzalah’s Operation Orange Wings medical aid and humanitarian relief mission to the Ukrainian-Moldovan border.

UNCOVER ISRAEL - Get the ISRAEL21c
Weekly Edition free by email
Sign Up Now!
Bring Israel's story to life.
Millions of people around the world rely on us to gain a deeper understanding of Israel. We are the trusted source for original content you won't find anywhere else.
You can make a difference. Donate today to support journalism that brings Israel’s story alive.
SUPPORT ISRAEL21c
Read more on:   Tales from the heart, Social Action, Ukraine, United Hatzalah