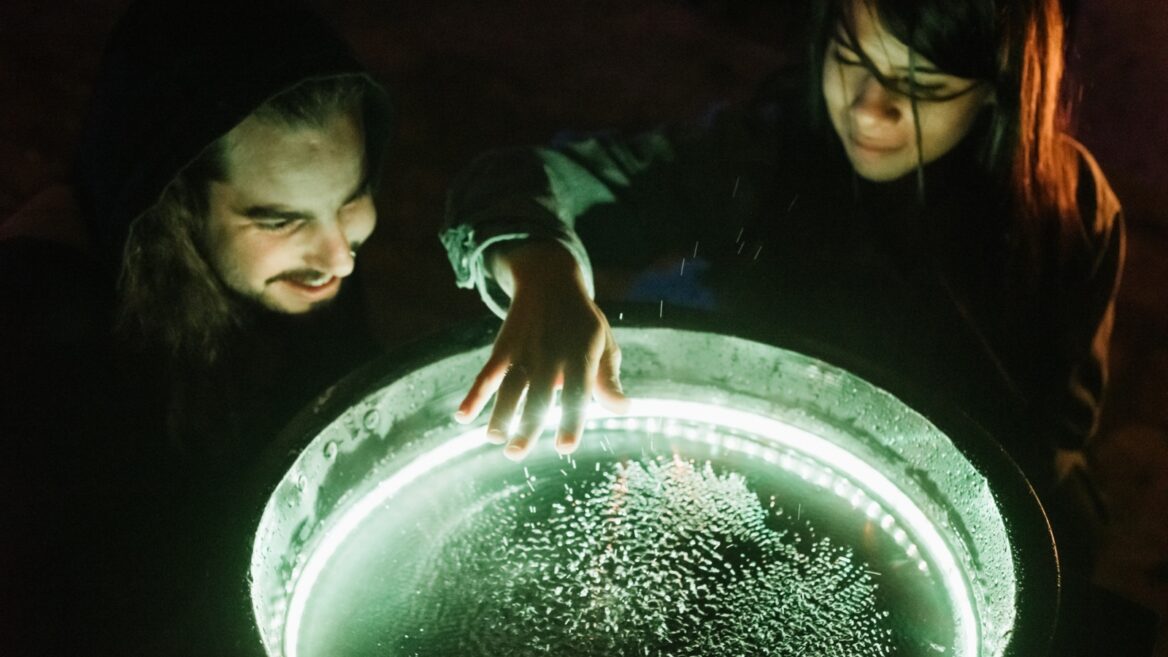 Have you ever felt the vibrations of clashing cymbals or banging drums? An Israeli dad invented ingenious ways to channel those soundwaves into water or sand, creating an extraordinary visual and tactile musical experience.

“We use big bowls of water and colorful flashing lights that change according to sound, so you can see and touch soundwaves,” Braunstein says. “You can speak and see the effect of your voice on water. It’s an interactive discovery.”

A CyMagic show in collaboration with the Israeli Chamber Music Orchestra, “Touching the Sounds with Beethoven,” won the Israel Accessibility Award in 2018 and an International Sound Award in 2019. 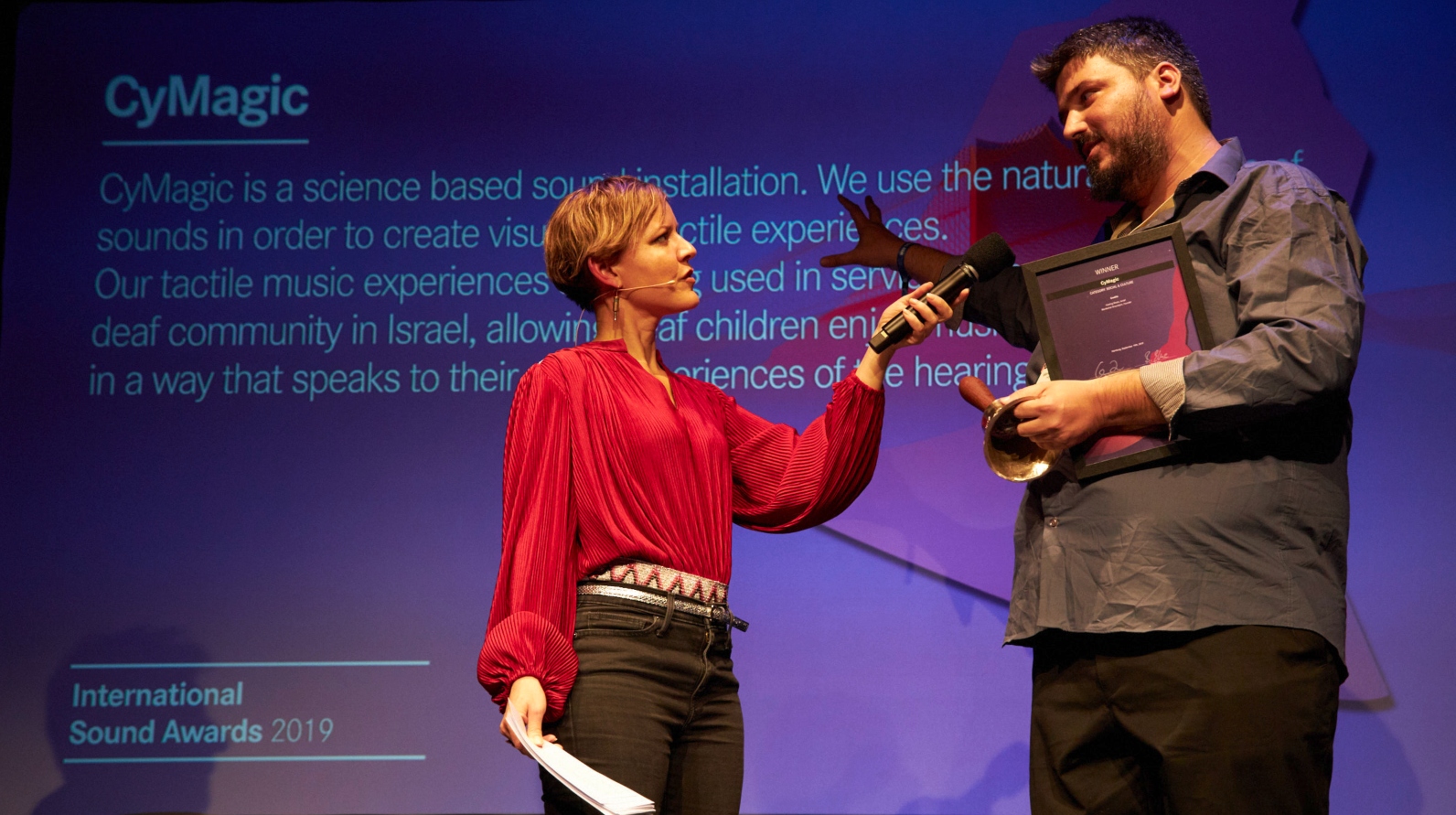 Hearing-impaired fourth- and fifth-graders marveled at the experience of watching and touching water and sand transformed by sounds coming from the orchestra.

“You can feel the water quivering, sensing the sound itself as if you are touching the instrument,” said one girl.

Another child said the show made her realize “there is someone else who understands the hearing impaired and that I’m not all by myself.”

“We have toured with CyMagic and live musicians in many locations around Israel and [the Palestinian Authority territories], visiting children with disabilities and different special needs and brought the magic of live music to where they are,” says Braunstein.

“Since we saw the appreciation in both children and parents’ eyes, we decided to try to reach all the out-of-the-way places – the schools and institutions where there was limited or no access to cultural centers.” 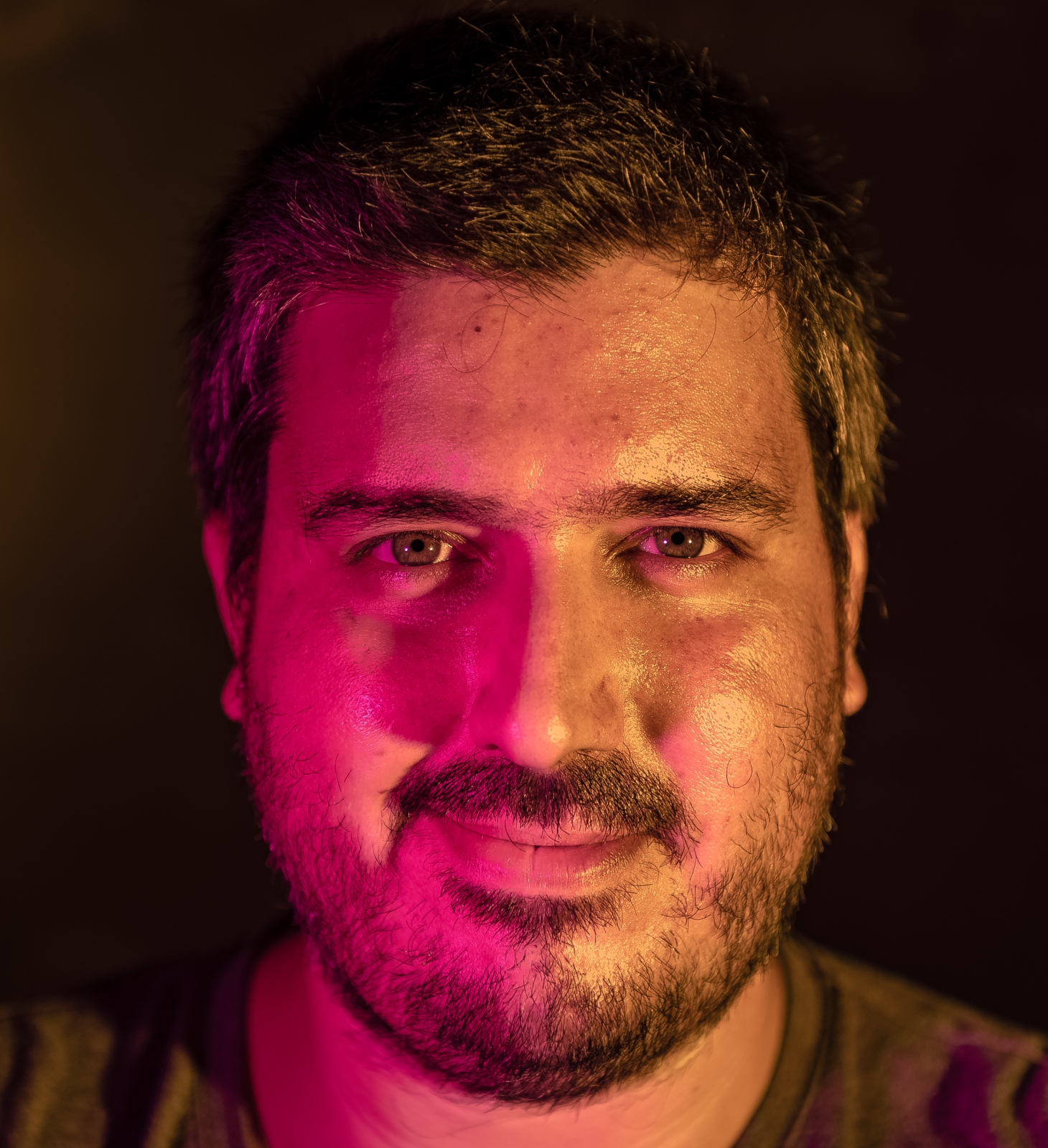 Braunstein lectures abroad about his unique project, launched in 2015. In 2018, he presented his “visual music machines” to other innovators at Music Tech Fests in Croatia and Sweden.

In Israel, he’s presented CyMagic at Microsoft, Rothschild Boulevard of Innovation, indie music festivals and more. He has long felt that music has healing power.

“As I got into sound engineering professionally around 2005, the acoustic part of sound healing began to interest me,” he tells ISRAEL21c.

While working backstage to fix a feedback problem at a sound event, Braunstein accidentally turned up the amplifier too high and felt the vibration of the soundwaves strongly in his muscles and even in his teeth.

“I started to think about how to take sound a level deeper to what it feels like, not what it sounds like,” he says.

Researching the properties of sound online, he found a paper on cymatics, a field devoted to making frequencies and sounds visible by transferring their vibration into different materials. At the time, cymatics was considered a far-out, New Age theory without much scientific basis.

“But I assumed if there was anything true about it, the mechanics had to be there,” says Braunstein.

He experimented at home, using old speakers, power amps and frequency generators to reproduce the experiments he’d read about and to determine the role of acoustics in cymatics.

“Our first project was a Chladni plate where a metal plate is attached to a speaker and sand or salt is sprinkled on the plate. The frequencies emanating from the speakers vibrate the plate and the sand spills from places with high vibration to places with no vibration. Symmetrical patterns emerge,” Braunstein explains.

“Then we started working on recreating that experiment in water, using more old speakers, and adding cameras, lights and stabilizers.” 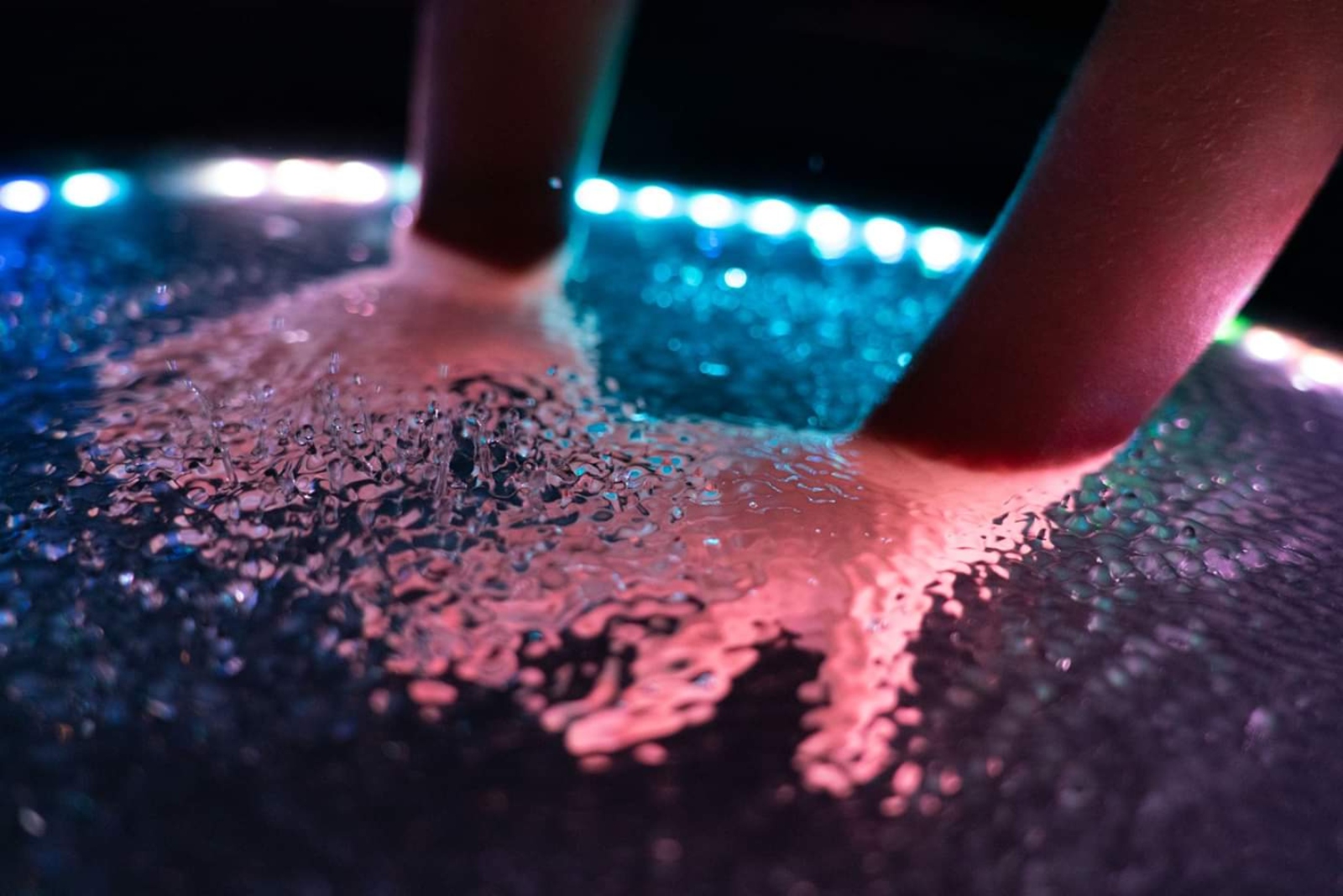 “We had our first breakthrough in 2015, when the prototype we’ve been working on managed to show very intricate and geometrical patterns. That’s when we knew CyMagic was ready to be presented to the world.”

Taking his machines around Israel for people to try, Braunstein realized that this vibration experience could substitute for the auditory musical experience.

“Watching people interacting with the vibrating water of our tactile music box sparked a desire to allow people to ‘feel the music.’ In the second half of 2016, we banged on many doors, looking for a partner who would let us try our installation to translate their music.”

Have you ever seen the sounds of the Prodigy?Share this cymatic video to raise awareness that some people don't get to hear music.Support cymagic's project to bring live music to children with special needshttp://bit.ly/2UeAkAG

In November, Braunstein presented “Water Knives” at the Zero One digital art festival at Jerusalem’s Tower of David museum. In collaboration with video artist Danielle Parsay, “Water Knives” offers a tactile experience of both music and visual art.

Braunstein has turned CyMagic into a social business.

Last April he raised $25,000 in a crowdfunding campaign and applied for grants. He’s gotten funding from the Ted Arison Family Foundation and the Ministry of Labor and Welfare, and worked with the Equinote Association for cultural accessibility in Israel.

“I want to create Cymagic teams around the world so that classically trained musicians can take our machines to schools targeting deaf children — but not exclusively — and create an inclusive experience that most hearing people have never experienced, either. Inclusiveness is something we want to bring everywhere.” 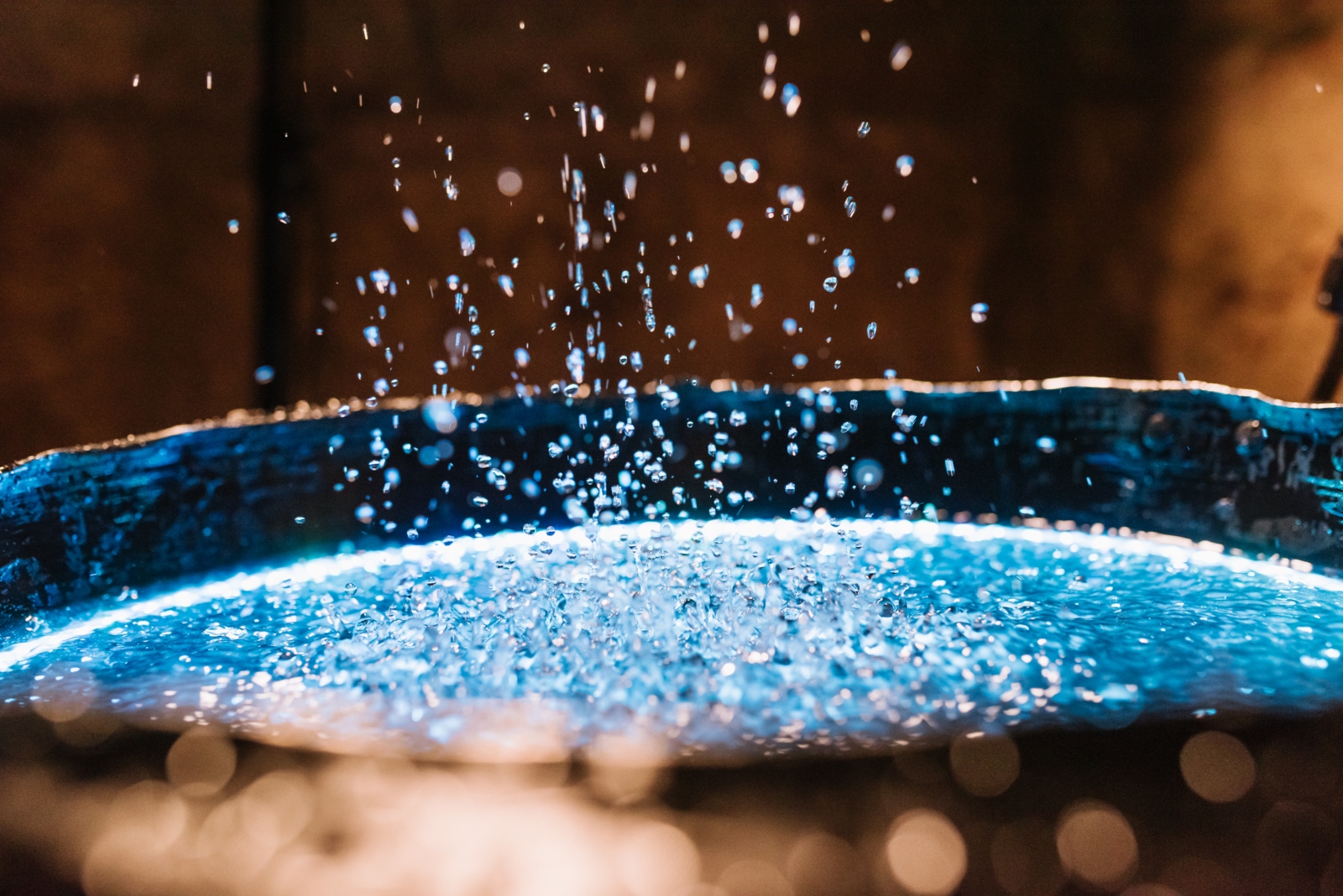 Meanwhile, Braunstein runs a marketing agency and has started a small design studio where he’s working on “a lot of international projects” on commission.

For example, a corporate client wants a permanent tactile sound installation for its headquarters. The Croatian Swimming Federation wants a pool equipped to make the most of the sound-water relationship.

Braunstein says CyMagic is unique in the world.

“I was the first to translate live music into visuals, using cymatics to provide a tactile music experience,” he says. “And aside from the fact that it’s new, it’s also a lot of fun!”