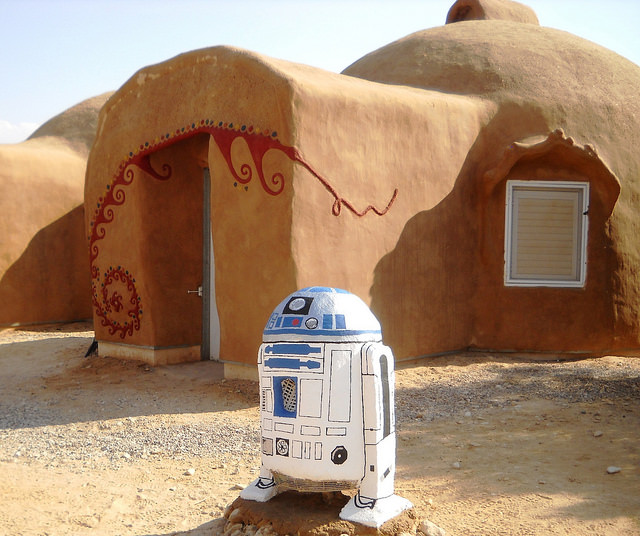 The Lotan buildings are constructed from straw bales coated with mud, making them fireproof as well as earthquake-proof.

The Lotan buildings are constructed from straw bales coated with mud, making them fireproof as well as earthquake-proof.

In preparation for future anticipated tremors, the Israelis are taking a unique approach to safe and environmentally sound construction rather than the more common, but expensive and less effective, reinforced concrete method often relied on to withstand earthquakes.

Sitting a top the seismically active Great Syria-African Rift, these southern Israeli builders have developed an earthquake-proof housing system that can be manufactured and constructed quickly by people without building experience.

Northwestern University Prof. Eric Masanet recently brought Alex Cicelsky of Kibbutz Lotan as a guest lecturer to his course on sustainable engineering to speak about the development work of the kibbutz’s Center for Creative Ecology (CfCE).

Cicelsky told the students about the CfCE’s no-water composting toilets, biogas-fueled stoves and organic agro-ecology in the desert. All of these are low-tech systems that bring high-impact results.

He also shared a photograph of the devastation following the 2001 earthquake in Gujarat, India.

“My father was the architect of our homes, and during high school I worked in construction,so structural integrity is a deep-seated interest,” Cicelsky said. “Examining the photos of the destroyed houses in India and reading the investigations into the catastrophic failures of concrete buildings during the Izmet, Turkey, earthquake of 1999, I discovered paradoxes.”

He pointed out that in both Izmet and Gujarat, people living in traditional wood-framed multi-storied houses with earth-brick walls, or in clay houses molded by women a century earlier, suffered little more than cracked walls after these earthquakes. However, families living in newer concrete apartments were doomed as the columns of these buildings were severed and roofs and floors pancaked on top of each other.

Ancient methods to the rescue

When Cicelsky and his building partner Mike Kaplin designed the student housing for the campus of the CfCE, they recognized they had two potentially contradictory design criteria — to be earthquake-proof and to have an extremely low environmental footprint.

Most houses and apartments in Israel are built from reinforced concrete in accordance with seismic resistance standards. The downside is that, according to the Israel Ministry of Environmental Protection, “Cement production is the most important non-energy industrial process emitting CO2.”

Straw bales — a waste product of wheat production — are a locally available renewable resource and superb insulator. The mud-straw coating holds the bales together and makes them fireproof (astounding even the Standards Institute of Israel, which performed fire-code testing).

The elegant geodesic dome is manufactured by hand and constructed by students from simple steel pipe holds. Though the dome holds four tons, “When the earthquake shakes the earth, the domes may slide around like an upside-down bowl on a wobbly table, but they won’t collapse,” explains the designers.

They used the concept of simple steel structures with straw-bale walls to build Kibbutz Lotan’s restaurant, one of the first grid-connected, solar-powered public-use buildings in Israel, as well as an auditorium. Those buildings show how energy efficiency and reducing the emission of greenhouse gases from construction materials can be scaled up.

An idea for Nepal

Cicelsky and Kaplin have plans for the kibbutz’s new student “EcoCampus” that may be more appropriate to Nepal and other places where poor people need safe and comfortable houses.

“We recognize that living in a dome is fun for our students but not functional for a family,” according to Cicelsky.

Their next project is a three-bedroom rectangular building that will be light-steel framed like the domes and insulated with straw bales.

Just like the domes, the buildings will be heated solely from sunlight. In total,their buildings use 60 percent less energy for heating and cooling than do conventional buildings in the Arava desert. They can work even more efficiently in cold climates like Nepal.

The Kibbutz Lotan designers have posted free tutorials on their construction methods on YouTube and hope to network with relief agencies in Nepal through a former CfCE staff member who recently arrived in Nepal to volunteer with Tevel b’Tzedek,  a Jerusalem-based nonprofit through which Israeli and Jewish volunteers from other countries lead community-building projects in disadvantaged villages of Nepal, Burundi and Haiti.