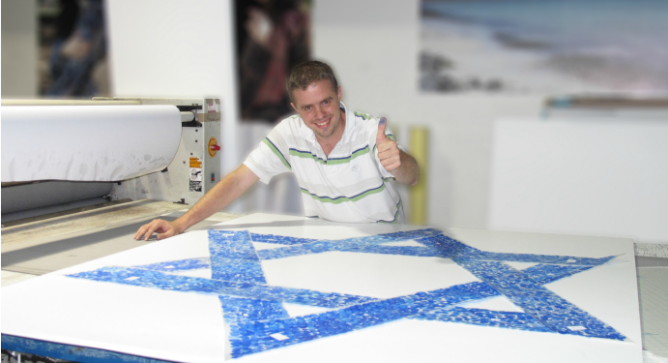 Javier Gelbwaser’s thumbprint is one of thousands that make up the blue lines of this record-breaking Israeli flag.

Look closely at the blue lines of the huge Israeli flag that won a Guinness world record for most artists working on the same installation, and you’ll see they’re composed of fingerprints — 28,267 prints, to be exact. One of them belongs to Javier Gelbwaser.

This 35-year-old Mexican immigrant to Israel believes that collective art can unleash a powerful force for good.

When he was chairman of the Jewish Student Union in Mexico, he arranged for Jewish schoolchildren to handwrite 70,000 names of Holocaust survivors for a digitized display now on exhibit in Yad Vashem in Jerusalem, among other places.

Then he gathered 10,000 kids to construct a peace mural from 40,000 Mega blocks, representing the 40,000 Jews of Mexico. Each child inserted five wishes for peace into the building blocks.

“In the future, I would like to do a web-based startup related to collective art,” Gelbwaser tells ISRAEL21c. “I’m looking for a tech cofounder.”

A copy of the peace mural can be seen at the Rothberg International School of the Hebrew University of Jerusalem, where Gelbwaser directs a successful student exchange program he initiated in 2006.

“The fundamental idea is to show Israel as one of most important meeting places for humanity, and offer the opportunity to meet and speak with other groups and religions so the students will be able to understand the differences — and the challenges posed by these differences — and appreciate the common ground we share as human beings so we can all contribute to a better world,” says Gelbwaser.

He had discovered that many non-Jewish political science and technology students were interested in learning about Israel — and winning a free ticket provided by El Al — during annual three-day “Get to Know How We Think” Israel expositions he staged at Mexican colleges.

He also took part in the Foreign Ministry’s program for young Jewish leaders of the Diaspora, worked at a Jewish Agency summer camp in Ukraine and organized Mexico’s first Taglit-Birthright group in 2003.

Not as seen on TV

After moving to Israel in 2005, Gelbwaser proposed an experiential three-credit course called Coexistence in the Middle East (CME), conducted by the Rothberg School in collaboration with the International Institute of Leadership and originally sponsored by the Israel National Commission for UNESCO. 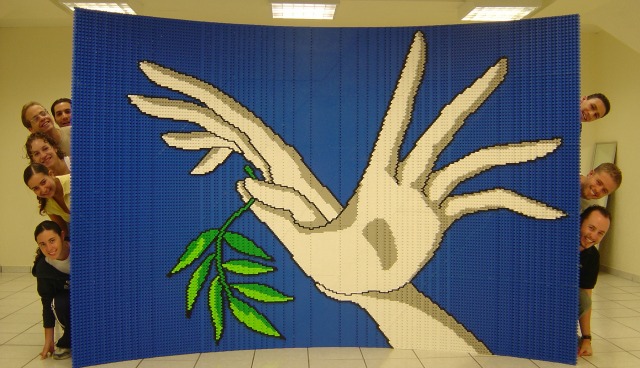 CME was Rothberg’s most popular course last summer, attracting 45 participants from 20 countries on five continents – including Japanese, diplomats working in the Cairo embassy and Chinese diplomats from the United Nations.

This summer, he piloted a second option in cooperation with the Foreign Ministry: the six-credit, two-course InnovNation entrepreneurship and Innovation program. Participants visited startups and VCs, innovation hubs and successful entrepreneurs in Israel, and studied breakthrough Israeli technologies that are shaping the future. He calls the program a great success.

“We bring people here and let them see things as they are, not as they see on TV,” says Gelbwaser, who arrived in Israel with corporate experience and earned a master’s of business administration from Tel Aviv University.

In 2010, he wed Jerusalem native Shira Greenberg, an employee of the Treasury Ministry, and they live in Tel Aviv. 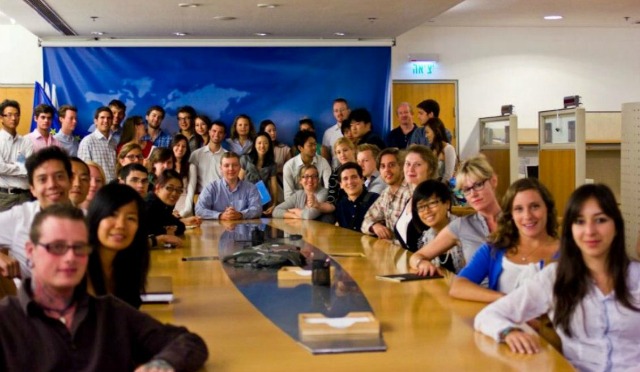 Participants in the Coexistence in the Middle East course visiting the Foreign Ministry’s Emergency Situation Room.

“I like the lifestyle in Tel Aviv,” Gelbwaser says. “It’s one of the most amazing places to live in the world. And I love that Israel is an innovation hub where ideas get transformed into projects that change the world into a better place.”

That kind of vision led him to stamp his own thumb on the flag project, along with Taglit-Birthright participants and supporters from 24 countries, to symbolize the mark that the Israel experience left on them. The flag was unveiled at Ben-Gurion International Airport in 2010, on the 10th anniversary of the program that has introduced Israel to a quarter of a million young Jewish adults from 50 countries.

Gelbwaser had a hand in getting Mexico included as one of those countries.

Because the majority of Jewish children in Mexico attend Jewish schools and come to Israel with their class at age 15, they were not a proper match for Taglit-Birthright’s free heritage trip aimed at young adults who have never had an organized tour of Israel.

But during several years of intensive terror attacks within Israel at the beginning of the new century, the annual school trips were cancelled and local leaders looked for an alternative for Mexican teens to experience Israel.

Gelbwaser, who’d spent a year on kibbutz at 18, helped organize and lead the inaugural 2003 Birthright group from Mexico. At his suggestion, each participant brought along hundreds of wishes written by schoolchildren for peace in Israel. The notes were put into the crevices of the Western Wall, a sacred site for Jews in Jerusalem.

Who knows? Perhaps Gelbwaser’s faith in the power of the collective will bear sweet fruit.

UNCOVER ISRAEL - Get the ISRAEL21c
Weekly Edition free by email
Sign Up Now!
Bring Israel's story to life.
Millions of people around the world rely on us to gain a deeper understanding of Israel. We are the trusted source for original content you won't find anywhere else.
You can make a difference. Donate today to support journalism that brings Israel’s story alive.
SUPPORT ISRAEL21c
Read more on:   People, collective art, Mexico, Innovation