‘A moment of kindness’ with kids at Felicia’s daycare. Photo by Abigail Klein Leichman

Once upon a time, Gideon Ben-Ami brought Israeli musicians to Carnegie Hall in Manhattan. Today he brings fresh food to a shelter for drug-addicted streetwalkers in Tel Aviv.

The former impresario, restaurateur and alternative-energy executive also delivers sandwiches to homeless men, fruit to migrant children, medicine to a refugee clinic, toys and food to a battered-women’s shelter and diapers to destitute young parents and elderly Holocaust survivors.

“There are a million poor people here,” Ben-Ami tells ISRAEL21c as he drives his little white van through the shabby streets of South Tel Aviv. “We can’t reach them all. We are reaching people who are in the worst possible situation.”

The goodhearted 69-year-old grandfather casts a ray of light on a bleak landscape. He knows everybody’s stories and tries to fill their needs. Among the items stashed in the van today are expensive pressure stockings for an African man and woman burned in a grisly arson attack.

“The main thing is food, produce and money to help people recover from overwhelming tragedies, like the couple who was burned,” he says. “But there are smaller cases that are just as tragic, and existing charities don’t have the wherewithal to help them all.”

For decades, Ben-Ami owned and managed a popular chain of eateries in Miami and Israel. It killed him to see how much food is tossed out by restaurants, bakeries and caterers. After he retired, he handed out sandwiches to homeless people in Tel Aviv.

When African refugees and migrants began flooding South Tel Aviv a couple of years ago, Ben-Ami volunteered to manage a humanitarian program, bringing rescued food to the makeshift tent city set up by the municipality in Levinsky Park.

A volunteer for the New Jersey-based Good People Fund observed Ben-Ami at Levinsky and recruited him to continue his charitable work with the fund’s support. He was delighted to devote himself full time to something he finds so rewarding.

“I’m basically a shaliach [messenger],” he explains. “The essence of what I do is taking things from one point and bringing them to another, knowing when to pick up and what to pick up because there is so much out there. It’s a small program with many facets.”

He stores some of the produce in an alcove next to a publicly funded safe house where homeless and drug-addicted women working the streets can shower, grab a bite and sleep in a real bed. This project was formerly managed by his ex-wife, Manya, an addictions counselor and recovery coach.

A nearby commercial building houses Turning the Tables, where women in recovery learn marketable design and fashion skills. On our outing, Ben-Ami takes them some of the sandwiches he’s just picked up at the regional police headquarters near Jaffa.

At least once a week, Ben-Ami pulls his van to the station’s loading dock to receive hundreds of leftover sandwiches boxed up by Officer Eyal Raviv. Sometimes he brings Raviv food packages to take to a destitute family in another city.

“He’s one of a kind. I can only say good words about this man,” Raviv tells ISRAEL21c. Until he and Ben-Ami paired up, the leftover sandwiches were thrown away.

Today, some of these sandwiches will help fill bellies at Felicia’s daycare for African children. In this overcrowded and barebones facility, 17 preschoolers crowd around to shake Ben-Ami’s hand and shout “Shalom!” Clearly, the brief visit brightens their day. Ben-Ami calls it “a moment of kindness.”

Felicia doesn’t have a play yard. Once a week, volunteers travel down from Zichron Yaakov to take the youngsters to the park. They work with Ben-Ami to fill a variety of social-welfare gaps in South Tel Aviv through what he calls micro-charity.

A doctor in the group collected medicine samples from her colleagues for Ben-Ami to take to the migrant clinic in the Central Bus Station. Her daughter arranged with Ben-Ami to repair a decrepit daycare with a bunch of her friends. They collect cash to supplement the rent of an Eritrean migrant, Marhawi, whose wife hung herself and left him with two babies. When the older child was in the hospital recently, the group lined up visitors.

Ben-Ami stops at Levinksy Park to pick up a member of the group who has taken Marhawi and his children under her wing. “Every month I’ve been coming down to spend a couple of hours with Gideon helping where I can,” she tells ISRAEL21c. 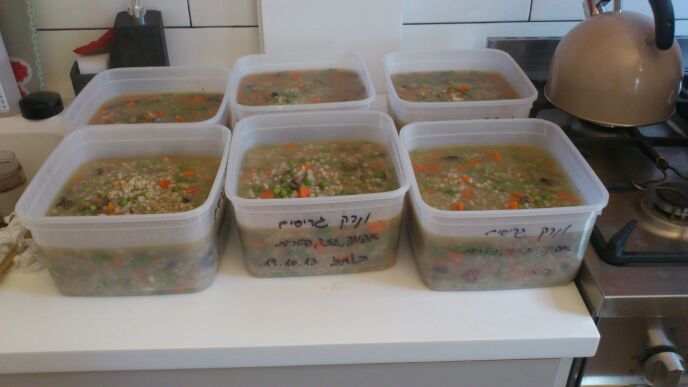 The volunteers are sometimes heckled as they accompany African children to the park. Ben-Ami can’t understand this. “The Bible commands us about 36 times to care for the stranger. If we are to be a light unto the nations, we need to set an example.”

Caring for others is in Ben-Ami’s DNA. Back in Russia, his grandmother Pesia ran a soup kitchen out of her home for students at the esteemed Volozhin Yeshiva. When poor neighbors borrowed her oven to warm their simple bean stews, she’d slip a piece of meat into the pot.

Born in Israel, Ben-Ami lived in the United States from the age of 12 until the oldest of his own four children was 12. Throughout his long and varied career, he confides, he made and lost millions. Now he is content living a life immersed in charity work.

“I discovered life is so much more beautiful and enriching if you live with voluntary simplicity, and that’s what I want my children to see.”

It seems they’ve taken his example to heart. Several times a week, one of his sons helps with the deliveries. His daughter recently asked him to help her distribute foodstuffs she collected for Holocaust survivors. 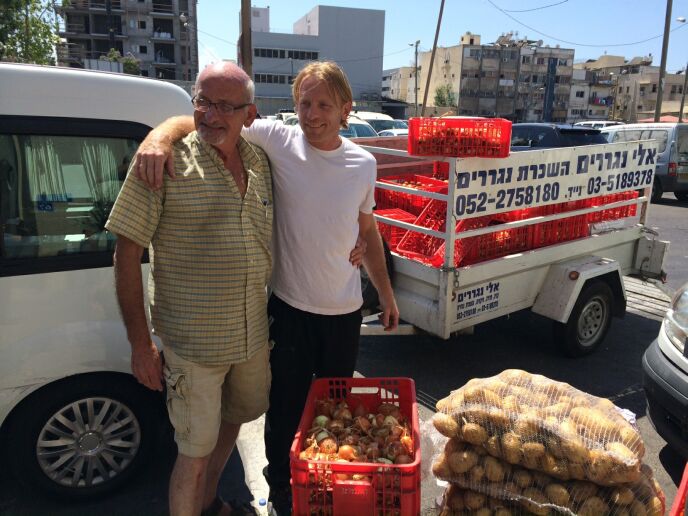 Gideon Ben-Ami and his son Doron loading produce into the van.

Ben-Ami always thinks of new ways to help the downtrodden. He supplied industrial-size pots to eight Tel Aviv women to make soup every week for homeless shelters. He wants to rent a storefront and turn it into a takeout soup kitchen. He finds dishwashing and table-busing jobs for down-on-their luck locals, thanks to his restaurant connections.

“Gideon’s greatest delight comes from feeding hungry people,” says The Good People Fund Executive Director Naomi Eisenberger. “He also has an uncanny ability to discover the poorest and most overlooked people hidden in Tel Aviv’s bustling metropolis. For those fortunate enough to meet him, life can improve dramatically.”