With a global pandemic in full force, election season kicking in and the Jewish holidays coming up, it’s easy to forget that an important day is just round the corner: International Dog Day, celebrated across the world on August 26.

What started out as National Dog Day in the United States has been adopted by dog lovers around the globe, and for good reason. The day celebrates dogs of all kinds and breeds, promotes rescue and adoption and recognizes the hard work of man’s best friend.

To honor all the lovable pooches out there, we’ve brought you three of our favorite working canines to gush over. Let us know in the comments if you know another amazing working dog.

“Lucy is seven years old. I got her when she was three months old. She’s a very, very sweet dog. I’m always told that she’s not a useful dog because if someone would break into the house she’ll just go to them to be petted,” Batya Jaffe says lovingly of her Cavalier King Charles, who loves snacks, particularly carrot sticks.

Jaffe, who made aliyah from Mexico at the age of 17, studied special education before learning animal-assisted therapy at the Hebrew University of Jerusalem. 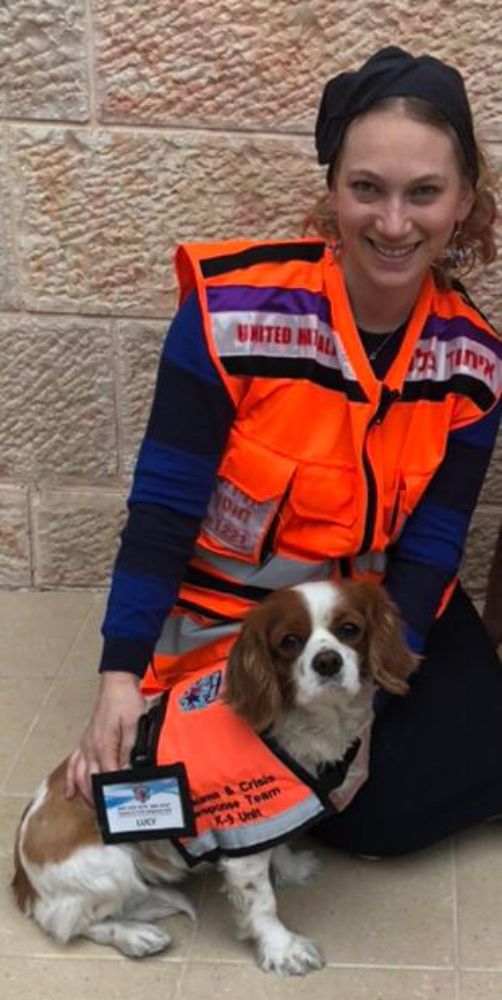 “The advantage of treating with animals is that one of the difficulties for us as therapists who arrive on the scene is that in order to initiate some kind of process we need initial contact,” she explains.

“It’s really not easy to turn complete strangers into people that you can hug and pour your heart out to,” she adds. “That’s the great things about the dogs – they’re great at breaking the ice.”

Jaffe says “Dogs can feel things that we cannot. Petting a dog and a dog’s presence reduce stress hormones and blood pressure.”Lucy is calm and amiable, making her comfortable to be around.

When not volunteering at the psychotrauma unit, Jaffe and Lucy provide animal-assisted therapy to elderly people. Jaffe trained Lucy herself, emphasizing the special needs of seniors. Lucy knows, for example, not to place the balls thrown around on the ground, but rather directly in the elderly person’s hand so that they won’t need to bend down.

“These are very simple things, but they’re very important in therapy in order to create the right kind of connection and to create a therapeutic atmosphere,” Jaffe says.

Lucy waits excitedly by the door on days they go out together to work.“She really is a dog who loves love, being petted and playing.” 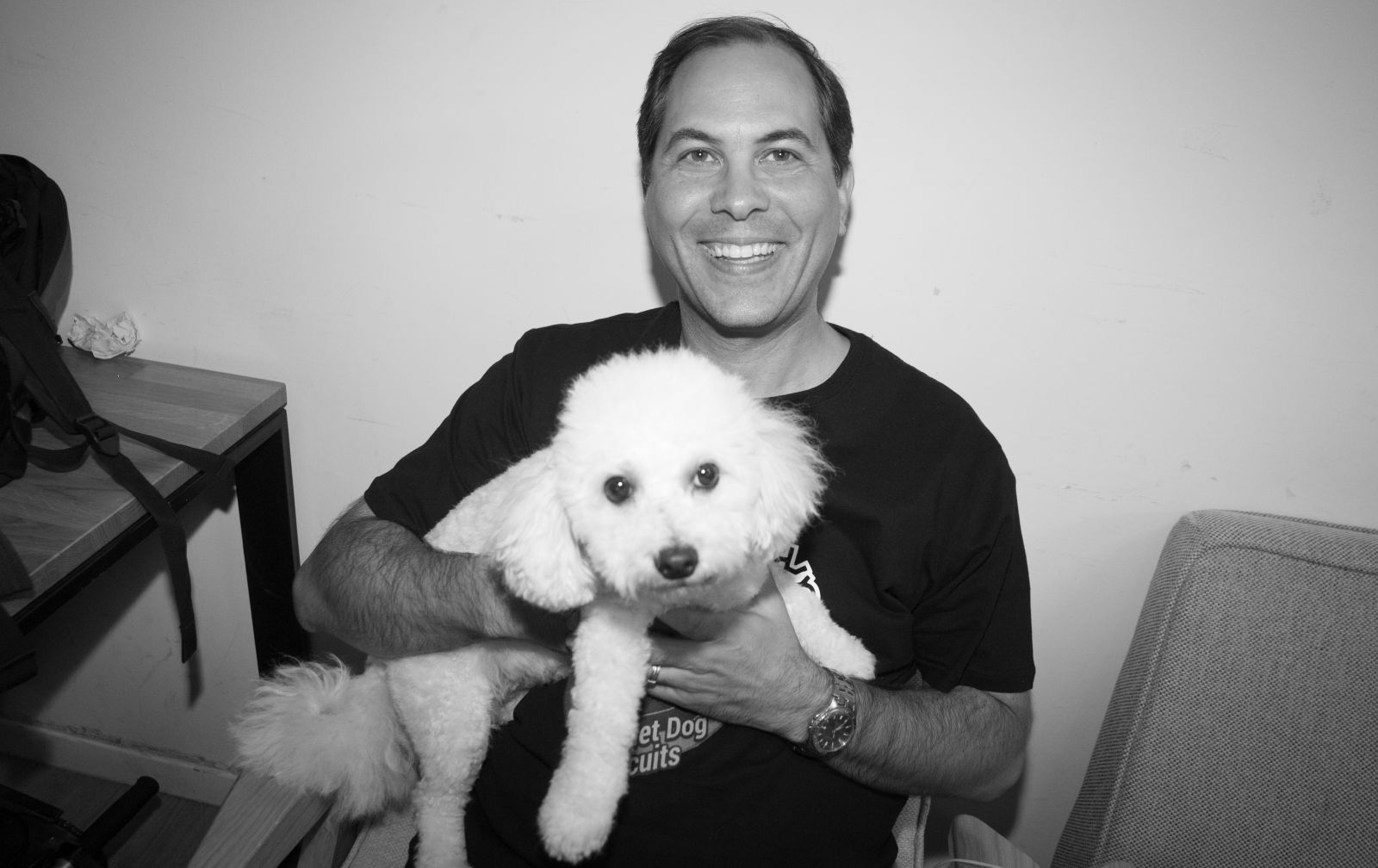 Phoebe is one of the luckiest dogs in the world: she’s the taster for the dog biscuits whipped up at Dog Mafia, the boutique dog-biscuit enterprise owned by her human, Richard Saffern.

The little Bichon Frise gets the first taste of the sugar-free and preservative-free biscuits, made from all-natural ingredients such as pumpkin and peanut butter as healthy snacks or training tools.

Saffern made aliyah from the United States back in 2003 and has been working in high-tech since. He got the idea for Dog Mafia (mafia means “bakery” in Hebrew) after baking a few treats for Phoebe and her doggie friends at her third birthday party. “The dogs loved it,” he notes.

“In the States we had a family business where we manufactured biscuits, and I love dogs,” he says of the coming together of these two passions.

“It’s all different types of products that are healthy, that are based on things that are more natural,” he explains. 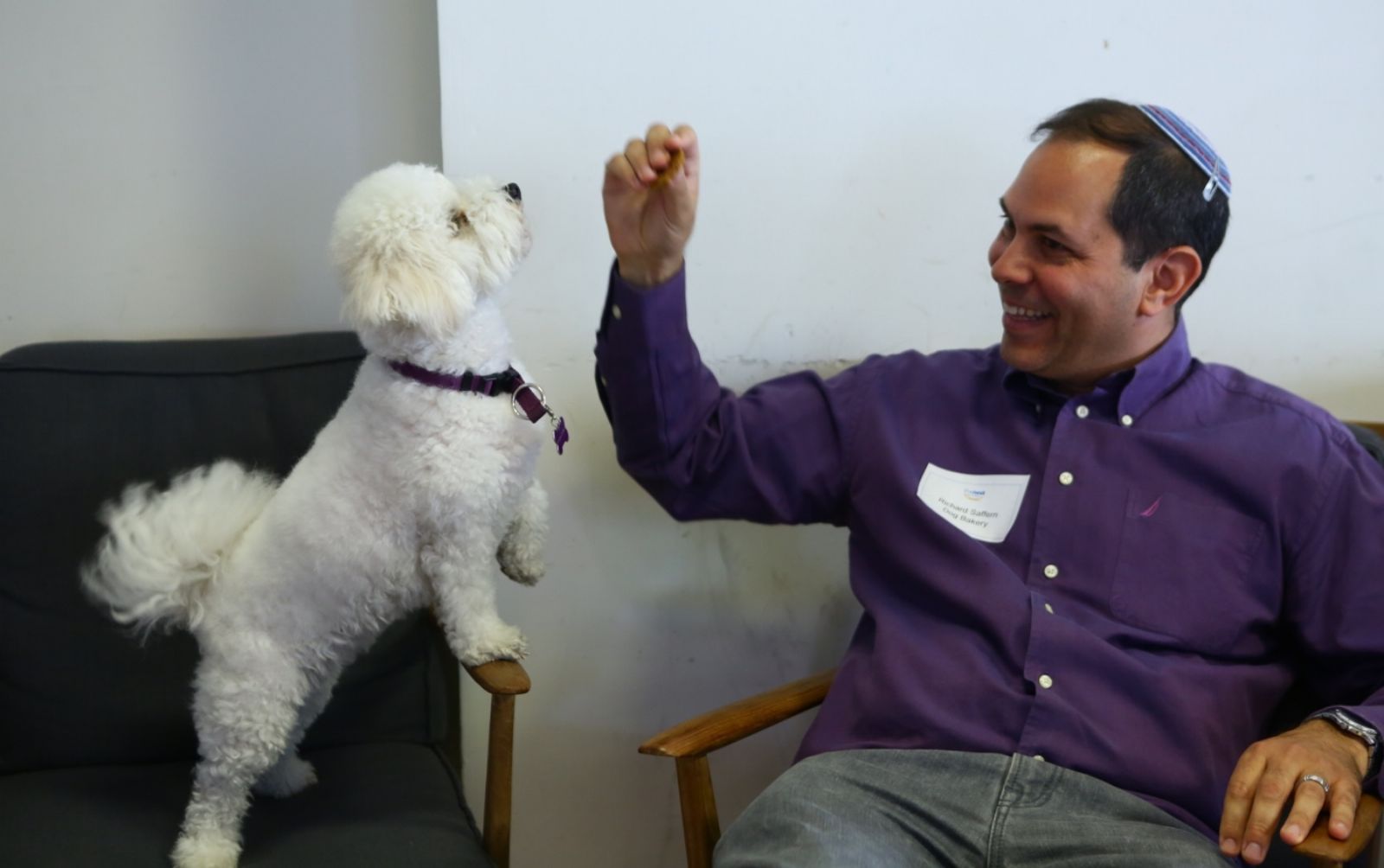 Currently operating out of home, Dog Mafia was incubated in TheNest, a business accelerator operated by Gvahim for recent immigrants to Israel. There, the enterprise received the people’s choice award for best pitch and best product.

Saffern believes that the popularity of the upscale dog biscuits lies in the fact that our canine friends have really become family over the years.

“People are starting to treat dogs as they would a child,” he notes. And like we try to keep our kids off the junk, so people are interested in giving their dogs a wholesome and natural snack. Lulu helped one young woman give up drugs, take care of herself and get back on track. Photo: courtesy

Like Lucy, Lulu is a seven-year-old Cavalier King Charles who helps treat people — in this case, a young woman who resided in a closed facility due to drug abuse and inappropriate behavior.

For three years, she used to come to the kennel where Lulu was kept in order to spend time with her and take care of her, giving her a sense of purpose, responsibility and a lifeline, says Ofer Biton, the head of the dog therapy certification program at the Broshim Campus for Integrative Medicine at Tel Aviv University.

“Due to the very special bond between them, and after many deliberations, we decided for the first time in the kennel’s history to give Lulu to her when she turns 18,” Biton says.

“She says that Lulu really saved her. Thanks to her sense of responsibility for the dog, she stopped using drugs and underwent an empowering process that made her capable of also taking care of herself and of believing that she’ll be able to take care of her future children,” he concludes.

Do you have a working dog that deserves a special mention? Tell us about them in the comments below.