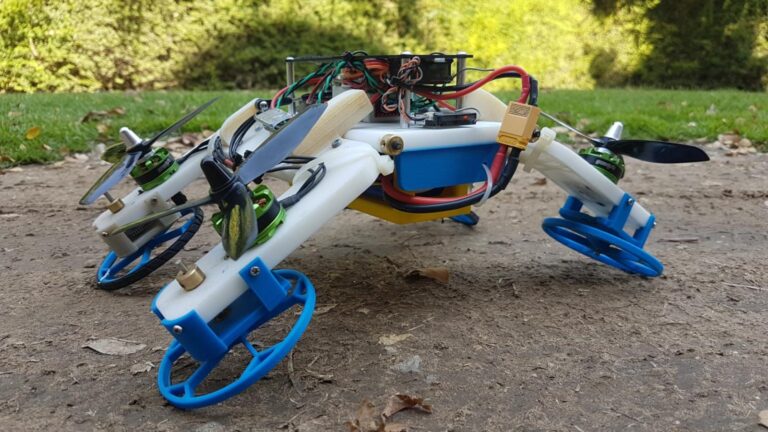 The first experimental robot drone that flies like a typical quadcopter, drives on tough terrain and squeezes into tight spaces using the same motors, has been developed by Ben-Gurion University of the Negev (BGU) researchers.

Unveiled at this week’s IEEE International Conference on Robotics and Automation 2019 in Montreal, the hybrid FSTAR (flying sprawl-tuned autonomous robot) was invented by Prof. David Zarrouk, head of BGU’s Bio-Inspired and Medical Robotics Lab, and his graduate student Nir Meiri.

FSTAR can fly over obstacles or run underneath them. The sprawl, which adjusts from a flat configuration to 55 degrees, allows the robot to transform its movement from a flying quadcopter to a car-like robot.

It also adjusts its width to crawl or run on flat surfaces, climb over large obstacles and up closely spaced walls, or squeeze through a tunnel, pipe or narrow gaps.

FSTAR can run on the ground at a speed of up to eight feet per second (2.6 m/s). That ability, combined with low energy consumption, makes FSTAR ideal for a broad range of applications that may require longer work time, said Zarrouk.

“We plan to develop larger and smaller versions to expand this family of sprawling robots for different applications, as well as algorithms that will help exploit speed and cost of transport for these flying/driving robots,” he said.

Zarrouk and Meiri’s research was supported in part by the Helmsley Charitable Trust through the Agricultural, Biological and Cognitive Robotics Initiative (ABC Robotics) and by the BGU Marcus Endowment Fund.

UNCOVER ISRAEL - Get the ISRAEL21c
Weekly Edition free by email
Sign Up Now!
Bring Israel's story to life.
Millions of people around the world rely on us to gain a deeper understanding of Israel. We are the trusted source for original content you won't find anywhere else.
You can make a difference. Donate today to support journalism that brings Israel’s story alive.
SUPPORT ISRAEL21c
Read more on:   News, Robotics, Ben Gurion University of the Negev