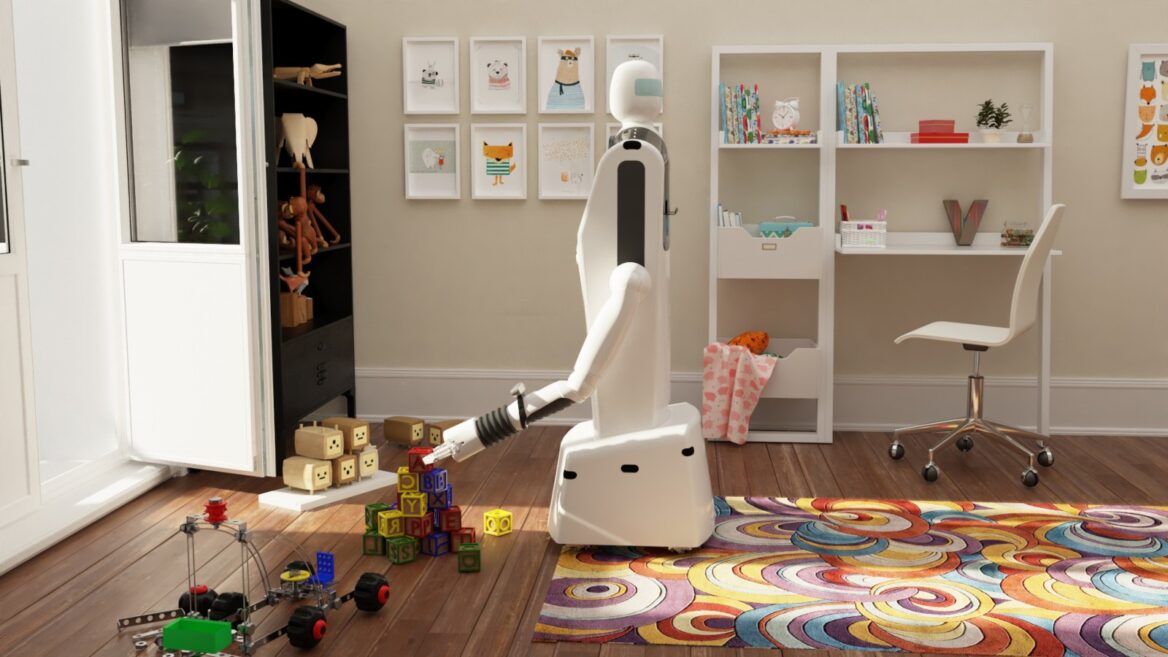 He’s about the height of Dobby the house elf from the Harry Potter books. And he never balks at taking on a repetitive or boring task. He doesn’t mind cleaning toilets, picking up socks or moving packages ina warehouse.

His name is Gary and he’s a robot for your home or business.

The height of a 10-year-old, with a speed of 3.1 miles per hour and a weight of about 40 kg (88 pounds), Gary is coming in early 2022 from Petah Tikva-based startup Unlimited Robotics.

Gary is currently “naked,” explains Guy Altagar, cofounder and CEO of Unlimited Robotics. This doesn’t mean Gary has no clothes (although he doesn’t) but rather that the robot hasn’t yet received all his programming instructions.

But that will soon change, as developers begin to create apps for Gary, who got his name from the initials of Altagar’s three children – Gali, Rani and Yaeli. 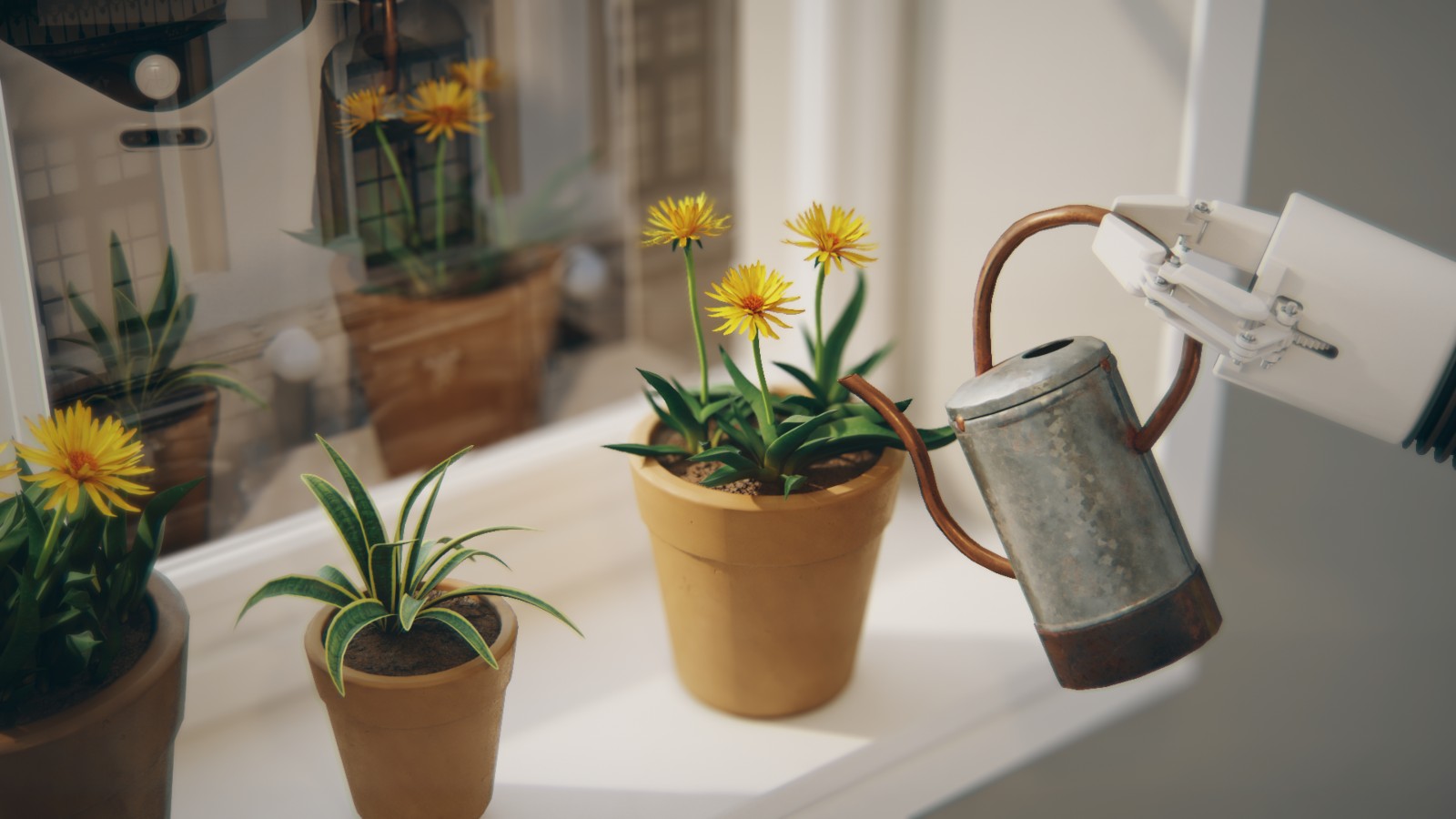 Despite that playful backstory, Gary is not intended to be cute.

“Amazon is developing something very cute,” Altagar says, referring to the conversational interface powering products such as Alexa. ElliQ, from Israeli startup Intuition Robotics, is intended to serve as a companion for seniors – also cute.

“We are not in the cute industry,” Altagar stresses. “We are in the functional, practical industry.”

Indeed, Gary wasn’t designed to play your favorite tunes on demand or to connect a video call to your grandkids.

Instead, Gary could remove dirty towels from the laundry basket and put them in the washer (great for the gym or at home). He can water the plants, load the dishwasher and open jars. 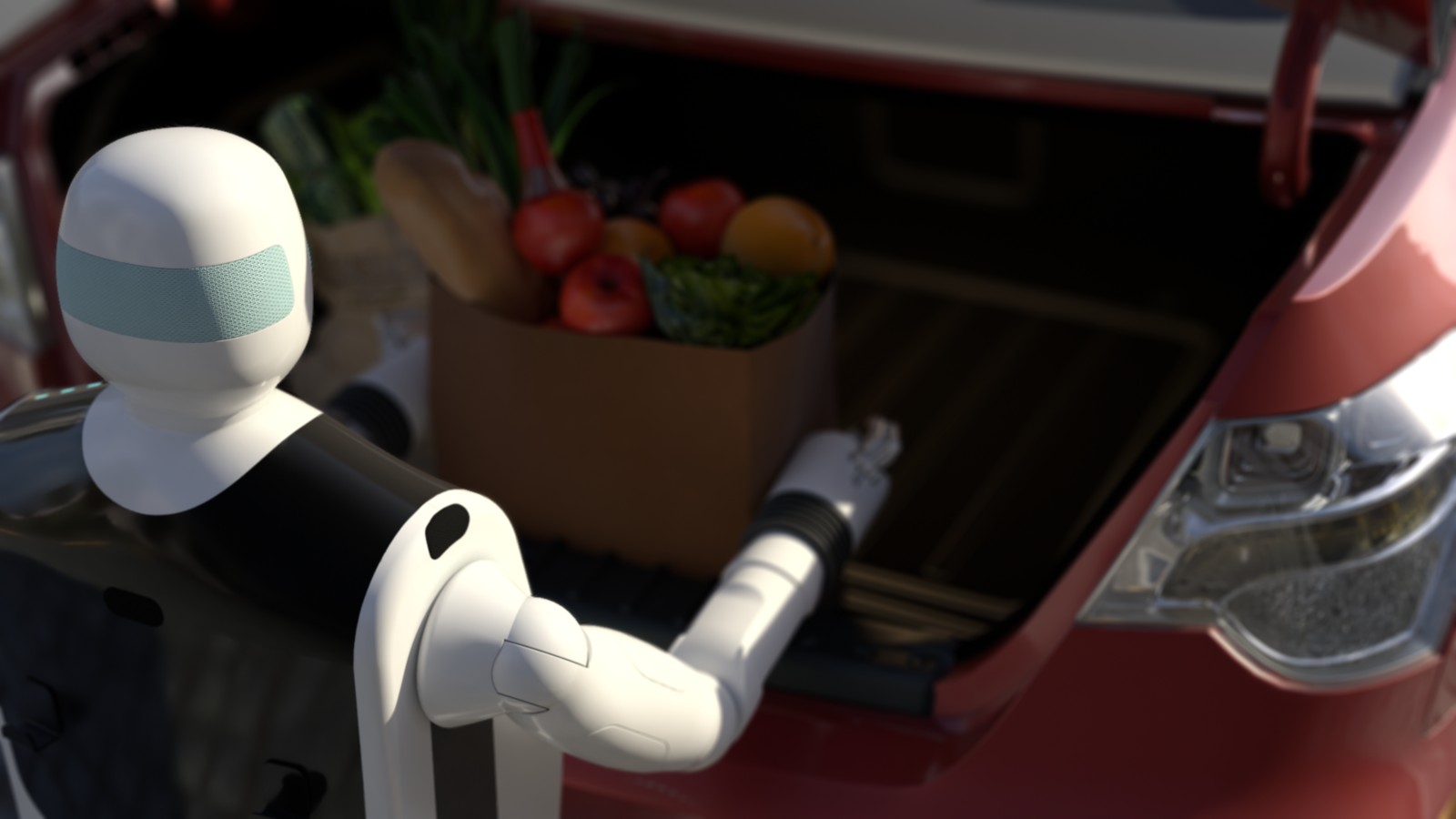 Gary loading boxes in the trunk of the car. Photo courtesy of Unlimited Robotics

In a restaurant, he could serve food or greet customers at the door. In a hotel, he could strip the bedsheets or replenish the shampoo and conditioner.

Gary can carry up to 11 pounds in his two robotic arms (although he hasn’t quite mastered the art of folding clothes, Altagar admits). His sensors and cameras include one to take a 3D view of a room and an infrared camera to see in the dark. 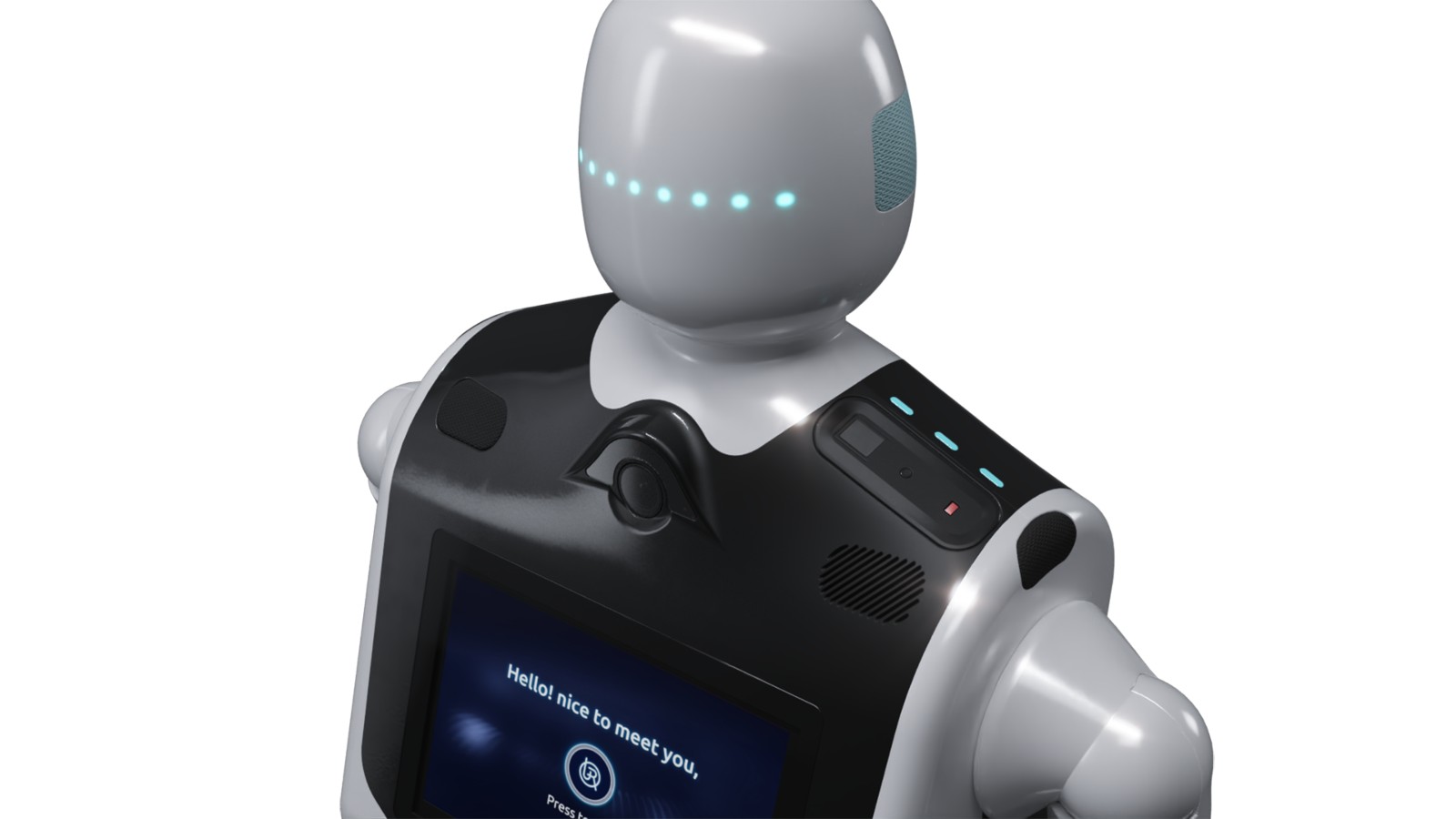 Gary the robot is coming in 2022. Photo courtesy of Unlimited Robotics

Gary is available for pre-order from the Unlimited Robotics website. He doesn’t come cheap at $5,900 (there’s an installment plan of $100 a month) but already 80 people have paid the $99 fee to reserve a spot on the waiting list.

While plenty of other companies are developing robots (Boston Dynamics has several models, including a new personal robot dog, Astro), what sets Unlimited Robotics apart is its “app store” for robots. 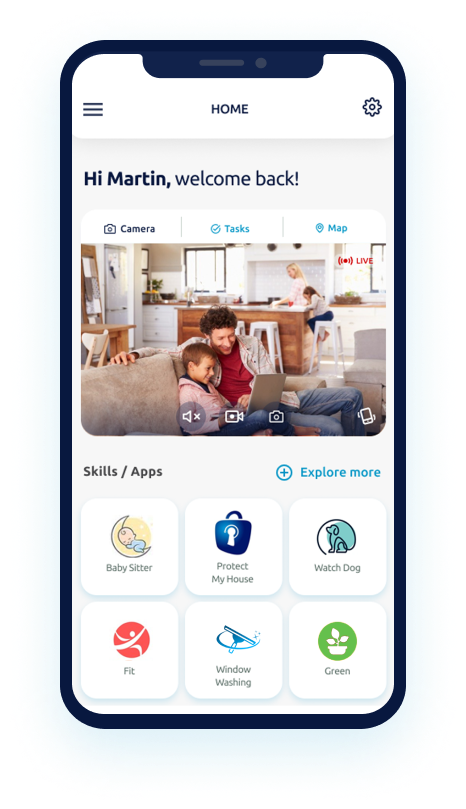 Apps can be downloaded to give Gary new skills. Photo courtesy of Unlimited Robotics

You want a new function for Gary? Just download it and you’re all set. If a developer chooses to charge for its app, Unlimited Robotics will take a 30 percent cut.

Unlimited Robotics is providing tools that allow any programmer to create apps without having to learn robotics-specific software. If a developer uses Python or JavaScript, for example, Unlimited Robotics’ Ra-Ya platform (named after Altagar’s mother, Raya) will translate that code to work on its robotics hardware.

Being able to seamlessly translate from one language to another “opens huge opportunities for software developers to build applications not just for the web or mobile, but for robots, too,” Altagar says.

Ra-Ya is not just for Gary. If a Xiaomi or a Samsung were to develop a four-legged robot with six arms (Gary has two arms and wheels), Ra-Ya converted apps will work on them too.

Altagar even envisions apps that extend what today’s single-function robotic devices can do – imagine a future Roomba with an “arm” attachment that can clean your windows.

Getting to that point is not a simple process.

“The app would have to identify what is a window, learn how to map it and get training in how to clean it,” Altagar says.

Ra-Ya’s software translation tech needs to know how to connect code in JavaScript to the robot’s computer vision, navigation and machine learning infrastructure.

When a Gary first comes to your home or business, he’s somewhat of a blank slate. An app may tell him what to do in broad strokes, but he needs some personal orientation. 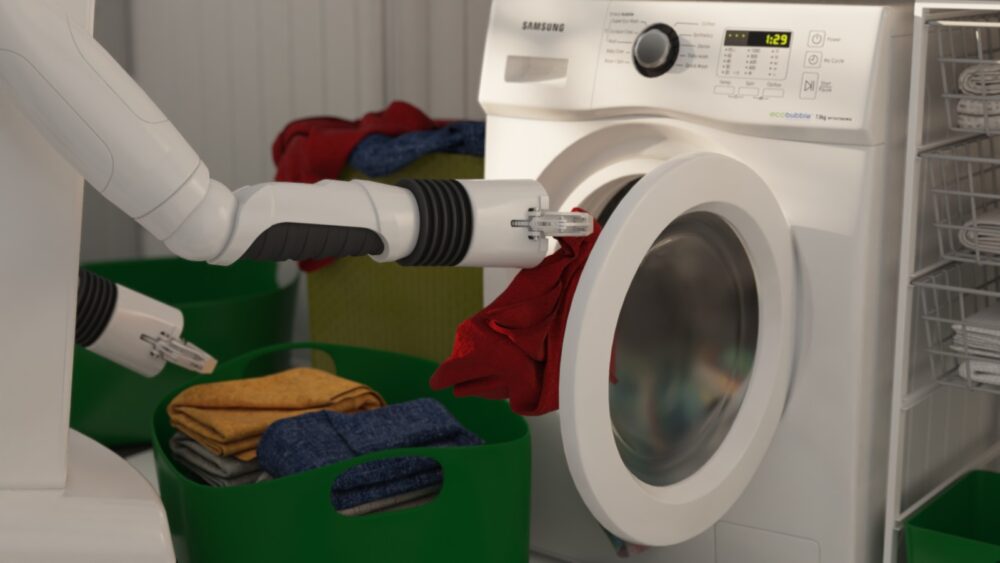 Gary’s a sociable guy – whatever he learns in your house or facility, he’ll share with all the other Garys connected via the Internet.

“Mapping your particular house may not be relatable to other users but understanding what a sock is or the optimal way to pick it up, or how to hold a cup of coffee, is something that can be shared,” Altagar says.

Gary is not a real-world version of Rosie from the Jetsons. In fact, the robot was intentionally designed as a male, Altagar tells ISRAEL21c. “We didn’t want to create an approach where a woman is ‘serving’ a family.”

Altagar doesn’t have a robotics background – he studied law and economics at Tel Aviv University and launched a mobile gaming startup. Although that company didn’t succeed, Altagar’s entrepreneurial spirit had been kindled. 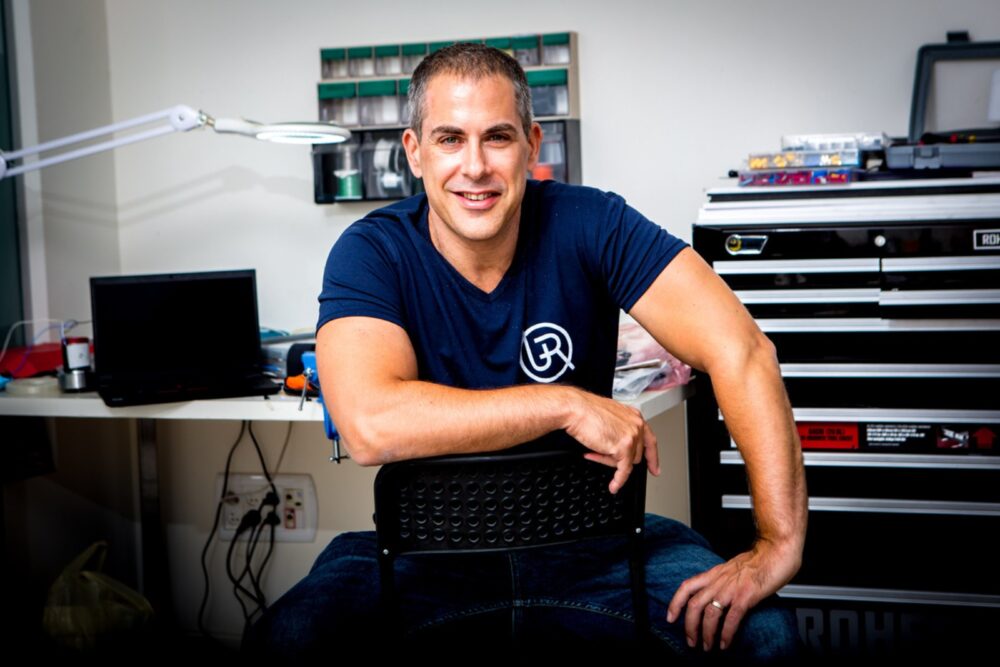 The impetus for Gary was to help firefighters.

“In 2019, there were a lot of fires, in California and in Israel,” Altagar says. “The only solution was to send up airplanes to release water. We thought, could we create a robot to enter into the heart of the fire and release water and other materials there?”

Gary the fireman proved to be a tad more ambitious than Altagar was ready to take on.

“But with three little kids in my house, leaving their toys everywhere and my back breaking from picking up their mess, this is where the idea came from.”

Altagar teamed up with Dr. Eli Kolberg from Bar-Ilan University’s faculty of engineering, and Martin Gordon, today the company’s chief technology officer and chief product officer, respectively. The company employs 26 people – 22 in Petah Tikva and the others in Colombia and Georgia.

Unlimited Robotics raised seed money from Wix CEO Avishai Abrahami and is finalizing a $15 million Series A funding round.

In December, Unlimited Robotics plans to host a hackathon for developers to create apps to test on Gary.

While Gary is not meant to put anyone out of a job, he is debuting at a time when many industries, from restaurants to hospitality, are having a hard time finding staff.

“We are on the edge of entering into a new era in which machines and mankind will be living together,”Altagar says.

“Robots are already in our warehouses and our logistics centers, where people don’t see them. We believe robots will move closer in proximity to humans in the next year or two.”

Could Gary be hacked? Altagar insists Unlimited Robotics is “using the best security measurements we can find.”

And Gary will not listen to your conversations (like Amazon’s Alexa) or take pictures without your permission. He’ll come with a hood that you can place over his head to guarantee he’s not watching or recording.

“We don’t care if you wear blue or red socks,” Altagar says. “That information is not going outside of your house. What we care about is the shape of the sock, because we want to improve Gary’s abilities.”

Tesla CEO Elon Musk gave the whole field of personal robotics a boost in August 2021 when he revealed that the electric car manufacturer is working on a “Tesla Bot,” a humanoid robot designed – like Gary – to handle “tasks that are unsafe, repetitive or boring.”

“That made people start to pay more attention to this industry,” Altagar says.

UNCOVER ISRAEL - Get the ISRAEL21c
Weekly Edition free by email
Sign Up Now!
Bring Israel's story to life.
Millions of people around the world rely on us to gain a deeper understanding of Israel. We are the trusted source for original content you won't find anywhere else.
You can make a difference. Donate today to support journalism that brings Israel’s story alive.
SUPPORT ISRAEL21c
Read more on:   Technology, Intuition Robotics, Robotics, Israeli apps