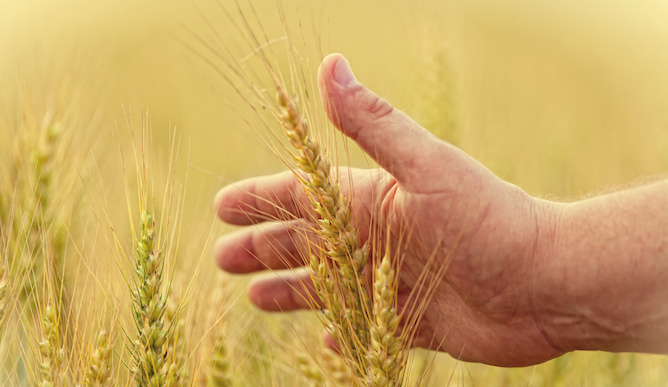 Wheat is one of the endangered crops. Image via Shutterstock.com

Israelis were part of a multicenter study that tried to understand the potentially devastating effects of climate change on the world’s poor and hungry, and the crops they eat for basic sustenance.

Their conclusions paint a grim picture.

Writing about their results in Nature, one of the world’s most prominent science journals, the study leaders predict that as climate change progresses, crops grown in the second part of this century will become “hollow.”

There will be lower levels of iron, protein and zinc in mainstay crops such as wheat, peas, rice and soybeans. In some cases, the scientists say, nutrients will plummet by more than nine percent.

According to the recent study — led by Harvard University with prominent contributions by Itai Kloog from Ben-Gurion University in Beersheva, Israel –climate change and an increasingly carbon dioxide (CO2) rich environment affects the zinc, protein and iron levels in important crops.

About two billion people live in countries where these kinds of crops make up 60 percent or more of their iron and zinc intake. Millions of people around the world die each year from deficiencies of these nutrients.

The study was based on hundreds of field experiments that were focused on what could happen to agriculture when food crops are grown in increasingly severe conditions caused by climate change.

CO2, released by combustion, is one greenhouse gas that is causing the earth to warm. Scientists the world over, including those at the United Nations, agree that climate change is a fact. Experts predict a severe change in weather patterns and a possible habitat loss for mammals.

In terms of food, increased carbon dioxide in the air could possibly raise yields. But this recent study on food crops and nutrition suggests that climate change is responsible for multi-prong effects and is not always positive.

The study took place over a period of six years in the United States, Japan and Australia, and looked at 41 different kinds of cultivars. Crops were grown in fields under normal conditions and were compared to CO2-enriched crops grown with open-air CO2 sprayers meant to match high CO2 levels of the future: 546 and 586 parts per million (ppm). Today, CO2 levels are at about 400 ppm.

These experiments were tried in the past but were done indoors in lab settings and invited criticism for their lack of a real-world approach.

Bringing their experiments into the field, the researchers found that crops such as wheat, rice, peas, and soybeans were all affected negatively with increased CO2 levels. However, corn and sorghum, which use a different process of photosynthesis, experience little effects from CO2 enrichment.

In all crops in the first group, there were declines in nutrients. There was a 9.3 percent drop in zinc in the wheat, for instance.

The silver lining of the study? If we know that crops appear to lose nutrients as CO2 increases, that gives agricultural researchers an opportunity to breed plants with reduced sensitivity to CO2.

The compete Nature article can be found here