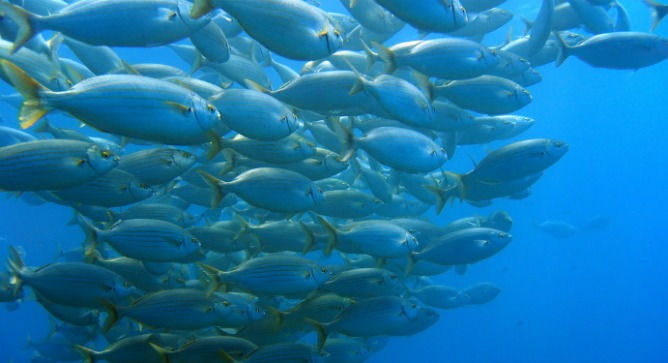 A shoal of bream fish in the Mediterranean via Shutterstock.*

Despite having a gorgeous coastline of sandy beaches, the oldest ports in the world, and a new offshore bounty of natural gas wells, Israel has contributed very little to Mediterranean Sea research.

But the same is true for all countries in the Mediterranean basin including Turkey, Cyprus, Greece and Lebanon. A new national center that will give an anchor to solid Mediterranean research has been slated to open up at the University of Haifa. At the center, scientists from leading Israeli academic institutions will help Israel understand and bank on its onshore and offshore assets.

“The problem is this, and it’s not only true for Israel: There is very little marine research being done in the Mediterranean Sea,” says geophysicist Yitzhak Makovsky of the university’s Leon Charney School of Marine Sciences, one of the core researchers who put together the proposal for the new center. “When Israelis do marine research they usually go down to the [Red Sea] Gulf of Eilat. There, it’s easy, special and fun.”

A unifying national center, which can provide the expensive infrastructure marine scientists need, will be most welcome. Lacking up until now have been the critical tools of the trade — ships, robots, wet labs and modeling equipment, Makovsky explains. That will all change with the new Center for Mediterranean Sea Research, which the Israeli government pledged to help build with a $15 million grant.

A first for the region

The University of Haifa, strategically located on the sea, will be joined in the venture by the Technion-Israel Institute for Technology, the Hebrew University of Jerusalem, Bar-Ilan University, Ben-Gurion University of the Negev, the Weizmann Institute of Science, the Geological Survey of Israel and the Israel Oceanographic and Limnological Research Center.

The new center, says Makovsky, will not only set a precedent for marine research in the Mediterranean, but will allow scientists from other countries to fly into a global hub to investigate one of the world’s most important waterways.

The timing couldn’t have been more critical. According to Makovsky, there is a new worldwide trend for countries to take stock of their onshore and offshore resources, especially in the face of unknowns such as rising sea levels brought on by climate change. Eroding coastlines, pollution and the big black holes of unknown marine ecosystems lying in the depths of the Mediterranean Sea are additional pressing issues that scientists want to study.

Makovsky, for instance, was part of a team that discovered a deep water coral reef in the Mediterranean, a first for the world of science. He has also helped address potential geohazards that offshore natural-gas drillers might face. In fact, he was among the first of the scientists to find pockets of natural gas seeps off Israel’s coast, he tells ISRAEL21c.

Another Mediterranean researcher of note is the University of Haifa’s Beverly Goodman, an underwater archeologist who is exploring the theory that tsunamis destroyed ancient cities. She also looks for indicators of climate change and other weather events as she sifts through the sands of time in the sea.

Until now, marine research in Israel has been lonely. There is one other research organization based in Israel called EcoOcean, which funds expensive sea exploration. But it’s only a drop in the ocean.

Makovsky explains that whenever he would put in a proposal for serious deep-sea studies to funding bodies in the government, the amount he would get was not adequate for top-quality research. He is confident that the shared resources of this new center’s Israeli partners will help raise the standards, quality and output of Mediterranean Sea research.

And from this, other Mediterranean countries –– friends or foes –– will benefit.

According to the proposal submitted to the Israeli government, the Center for Mediterranean Sea Research will cover areas such as gas extraction, marine infrastructure, desalination and the impact of artificial islands on Israel’s marine coast.

Makovsky notes that Israel is planning to construct a new airport on an artificial island by 2020 out in the sea. Researchers at the multi-disciplinary national center will be able to advise how to build it with minimal environmental impact and long-term sustainability. They could also help manage the newly discovered Mediterranean energy reserves without bias or political or economic interests.

“Once, every scientist had to try to battle on their own, with each group working in their own direction. Now there is an address for Israeli marine research. It’s good for international collaborations and one of our intents is to form a membership with the international Ocean Drilling Program,” Makovsky says. “Before this center, we couldn’t make any commitments to them.”

This new address is also important regarding industry. “Offshore drilling is involving incredible investments, which have until now been going into the commercial world and not leaking into the academic world,” he says. “We’ve opened our eyes and realized that we have an exclusive economic zone.”

*A shoal of bream fish in the Mediterranean via Shutterstock.

UNCOVER ISRAEL - Get the ISRAEL21c
Weekly Edition free by email
Sign Up Now!
Bring Israel's story to life.
Millions of people around the world rely on us to gain a deeper understanding of Israel. We are the trusted source for original content you won't find anywhere else.
You can make a difference. Donate today to support journalism that brings Israel’s story alive.
SUPPORT ISRAEL21c
Read more on:   Yitzhak Makovsky, marine research, Mediterranean Sea, Environment, Green Science, Coral Reef