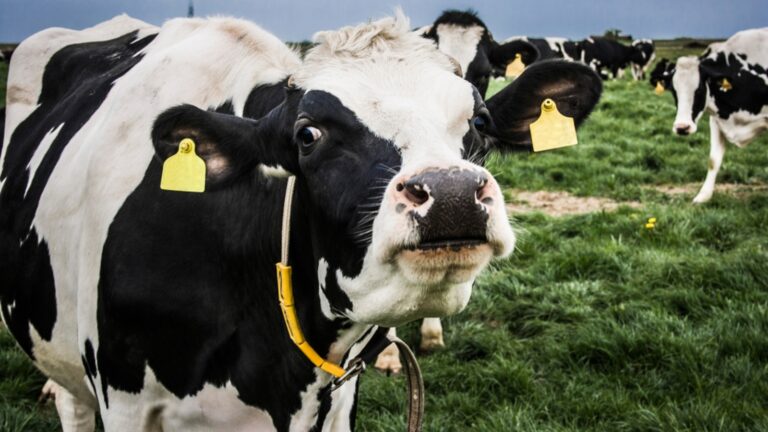 Cows' methane emissions contribute to the global greenhouse effect, but help may be at hand. Photo by L. Kora via Shutterstock.com

It’s simply not fair. When we humans fart and burp we get told off for being rude, but when cows do exactly the same everybody throws up their arms in despair and grumbles about how they’re bringing the world to an end with their greenhouse gas emissions.

Help may be at hand, however, however, thanks to a new study that has found that cows’ genes can be used to manipulate their stomach microbiomes, which in turn control the amount of methane gasses that animals emit as part of their digestive process.

Researchers studied 1,016 cows (816 Holstein dairy cows and 200 Nordic Red dairy cows) in Italy, Finland, Sweden and Britain, and found that a small number of host-determined, heritable microbes in the cows contribute to explaining their experimental variables and host phenotypes.

This discovery, they predict, will lead to microbiome-led breeding or genetic programs that will provide a sustainable solution to reduce emissions from ruminant livestock as well as increase milk production efficiency.

The study, which was led by Prof. Itzhak Mizrahi of Ben-Gurion University and the National Institute for Biotechnology in the Negev and Prof. R.J. Wallace of Scotland’s University of Aberdeen, was recently published in the journal Science Advances.

“Our findings are a major breakthrough for basic science and will have a positive impact on two major challenges facing the international community for the foreseeable future: climate change and food security,” says Mizrahi.

“Even now, the planet is operating at maximum output for meat and dairy products, and that problem is only going to get worse in the coming decades: By 2050 the world will have approximately 9 billion people. That’s going to mean a serious crisis in protein nutrition.”

“We expect to be able to increase production efficiency while at the same time reducing methane emissions. It would be hard to think of a more important ‘win-win’ for the planet than that,” he added.

UNCOVER ISRAEL - Get the ISRAEL21c
Weekly Edition free by email
Sign Up Now!
Bring Israel's story to life.
Millions of people around the world rely on us to gain a deeper understanding of Israel. We are the trusted source for original content you won't find anywhere else.
You can make a difference. Donate today to support journalism that brings Israel’s story alive.
SUPPORT ISRAEL21c
Read more on:   News, Environment, greenhouse gases