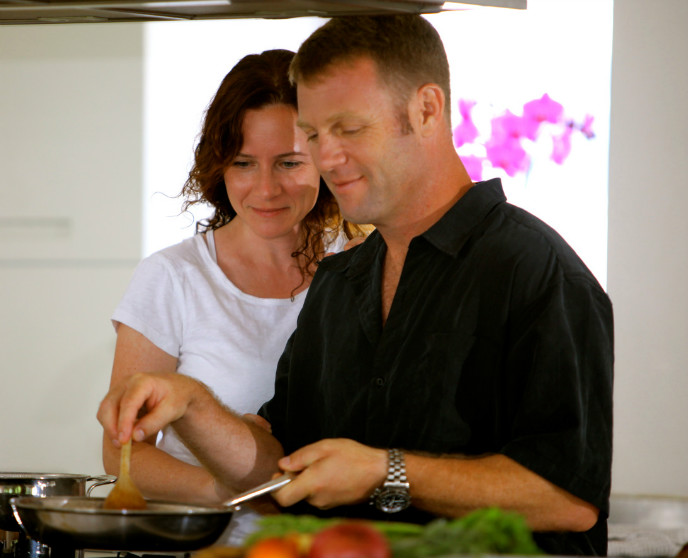 An American girl and an Israeli guy meet in a Jerusalem bar, fall in love, get married and later each develops type 1 diabetes. What are the odds?

“It’s statistically impossible that we both have it,” says Aviad, a 44-year-old marathon runner with degrees in law and finance. “No one in Jess’s family has type 1, and in mine I didn’t know anyone did until I met some long lost relatives and found out my aunt had type 1.”

Each month, about 200,000 unique visitors click on ASweetLife, frequently cited as one of the best online resources for people with diabetes. Many readers, like Michael and Jessica, have type 1 diabetes, an autoimmune disease affecting the production of insulin, the hormone that guides sugar (glucose) into the cells to produce energy.

When they met, Apple was an 18-year-old Texas girl on the Young Judaea Year Course, and Aviad was a 22-year-old IDF soldier, born in California and raised in Jerusalem. Apple moved to Israel in 1997; the couple married in 1998. He worked as an economist while she built a successful writing career. Apple’s essays and fiction have appeared in such publications as The New York Times Magazine and The Financial Times Magazine.

Diabetes was not on their radar when Aviad was diagnosed with type 1 diabetes in 2002, just 18 months after the birth of their first son.

He learned how to monitor his blood sugar and use insulin, which is necessary for anyone with type 1 to survive. He improved his diabetes management with a low-carb diet and exercise. He started long-distance running to prove to himself and others that diabetes would not keep him down.

During her pregnancy, Apple had been misdiagnosed with gestational diabetes, a transient condition. During her third pregnancy in 2008, she was properly diagnosed with a slow-progressing form of type 1 called LADA (latent autoimmune diabetes in adults).

The double diagnoses sent the couple to the Internet searching for resources and peers. They concluded that they could offer something more fun and comprehensive than the medical and personal blogs they found, and more attuned to healthful living and nutrition than diabetes organizations’ websites.

While ASweetLife publishes the latest information about diabetes research and technology, it’s also a place for emotional support. It is a community rather than a forum.

“It was a big deal to us to create something where people could communicate, sharing tips and information,” Aviad tells ISRAEL21c.

“It’s not enough to know about the latest insulin pump or new drug. Having a good emotional support system is key to dealing with any chronic illness, especially for us because of the need to monitor every bite of food you eat. It’s important to understand that a person who restricts their diet doesn’t have a lower quality of life. It’s just a little harder.”

ASweetLife is a nonprofit program of the Diabetes Media Foundation, with a board in New York and a pool of freelance writers including professional journalists such as Katie Bacon, a former editor for The Atlantic whose daughter has type 1; and Catherine Price, whose newest book is Vitamania.

“Our writers don’t necessarily agree with one another, but they’re all in control of their diabetes and they convey the emotional and inspirational aspects of living with diabetes,” Aviad says.

“Readers want inspirational stories about people succeeding with diabetes, whether raising a child or running a marathon,” adds Apple. “Type 1 is a challenge every day, and those who don’t have it can’t understand living from one glucose measurement to the next, and how your mood and how much you get done depend on that. People want to know it’s not always terrible — and when it is terrible, how you get up and go on.”

Readers are also in need of laughs. “For a good percentage of our readers, dark humor is really a way to commiserate,” says Apple. “We have an article up now called ‘I speak diabetes’ about the terminology and acronyms we use that nobody else knows.”

As writer Jacquie Wojcik points out in the piece, the question “Are you high?” has a different meaning to a diabetic than to a recreational drug user.

ASweetLife appeals mainly to readers who take a proactive approach to their (or their kids’) type 1 or type 2 diabetes.

Says Apple, “You can read the scary stuff elsewhere and think diabetes is just a countdown till bad things happen. But if you take good care of yourself and keep your weight in the normal range and move somewhat, you’ll probably be fine.”

ASweetLife has featured stories on some of the improved medications and monitoring systems coming out of Israeli research labs.

“We are very interested in Beta-O2,” an implantable bio-artificial pancreas now going into clinical trials. “And I interviewed a company that has a noninvasive glucose monitor for the nighttime. We want good products to succeed if we believe in what they’re doing,” Apple says.

Living in Tel Aviv with their sons, now 14, 11 and almost six, Aviad and Apple do not own a car and walk everywhere.

“ASweetLife is our message that life with diabetes can be sweet,” says Apple. “This disease doesn’t mean you’re going to be sick and die early, but that you will have to work harder to be healthy. People say, ‘Thank you for showing me that people with diabetes can live normal, healthy lives.’ They’ve found inspiration, and that is what keeps us going.”

UNCOVER ISRAEL - Get the ISRAEL21c
Weekly Edition free by email
Sign Up Now!
Bring Israel's story to life.
Millions of people around the world rely on us to gain a deeper understanding of Israel. We are the trusted source for original content you won't find anywhere else.
You can make a difference. Donate today to support journalism that brings Israel’s story alive.
SUPPORT ISRAEL21c
Read more on:   Health, Profiles, Type 1 Diabetes, ASweetLife, Jessica Apple, Michael Aviad