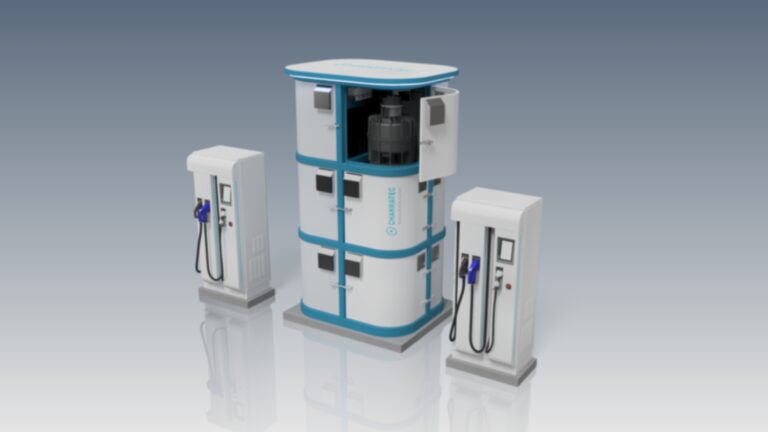 Israeli electric car charging startup Chakratec is coming to North America. The company is collaborating with Blink Charging, which has built some 15,000 electric vehicle charging stations and has 150,000 registered drivers in the United States.

The partnership is supported by a $900,000 grant from the Israel-U.S. Binational Industrial Research and Development (BIRD) Energy Program.

Blink’s charging stations are mainly in major metropolitan areas. In rural communities, the electricity grid often cannot handle the demands of electric vehicle powering. Plugging in too many vehicles at once can dim the lights in neighboring houses, while upgrading the grid can be prohibitively expensive.

Chakratec gets around that issue through its unique “kinetic storage” technology, where floating flywheels are suspended in mid-air by magnetic levitation.

“When you put electricity in, the flywheel starts to rotate,” Chakratec CEO Ilan Ben-David told ISRAEL21c. “Since the flywheel is suspended by magnets in a vacuum chamber, there’s almost no friction. So, the flywheel keeps spinning at the same speed.”

When a car is ready to plug in, the energy from the flywheel is converted back to electricity.

Because Chakratec’s technology doesn’t require filling a battery to full capacity to store electricity, it doesn’t tax the grid in the same way. Ben-David describes the technology as more like a toilet, slowly filling the tank, discharging quickly as needed and then immediately starting to refill.

Because no batteries are involved, a Chakratec system can operate for 20 years, Ben-David claims, in a much more environmentally friendly chemical-free manner.

Chakratec has already announced two customers in Europe: Wien Energie, which has a Chakratec charging station at the Vienna airport, and Skoda Auto, which installed a Chakratec EV charge spot at the Prague Exhibition Center.

The partnership with Blink is the company’s first deployment in North America.

Chakratec has raised a total of $7.6 million since it was founded in 2013.

Chakratec’s technology would be compatible with Tesla’s electric vehicles, coming to Israel soon, in case Tesla wants to cut a deal with them.