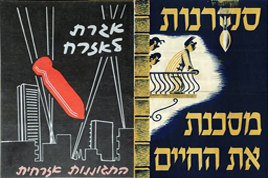 From the time of its establishment by Mordechai “Max” Nimtza-bi (Nimtzavitsky), the story of Israel’s civil defense infrastructure has been a story of self-defense. As stated succinctly in Wikipedia, “Civil defense in Israel deals with a variety of military and terrorist threats to the civilian population, which have included concealed bombs such as suicide bombings and car bombs, projectiles such as missiles, rockets and mortars, and hijacking of aircraft, buses and buildings.”

In Operation Protective Edge, Israel sustained few civilian casualties due to both the Iron Dome missile intercept system and also to the Homefront Command’s success in educating the population about how to behave during an missile attack. These efforts to train the public in how to behave in the face of various forms of terrorist threat have been ongoing since the before the War of Independence.

At that time, HAGA (the Civil Defense) warned citizens that their curiosity during a shelling could endanger their lives (see image below left ). Also in the 1940s, HAGA, together with cooking oil company Shemen Industries, published an instructional game about how to act during an air raid (image right).

HAGA issued instructional pamphlets and posters, such as the one below directed at mothers that reads: To Mothers in Israel! 1) Look out for your children’s welfare and don’t let them wander the streets. 2) Make sure that your children are under constant adult supervision. 3) Teach your children how to behave during a bombing attack. 4) Calm your children when things are tense. 5) Make sure your children wear ID tags. 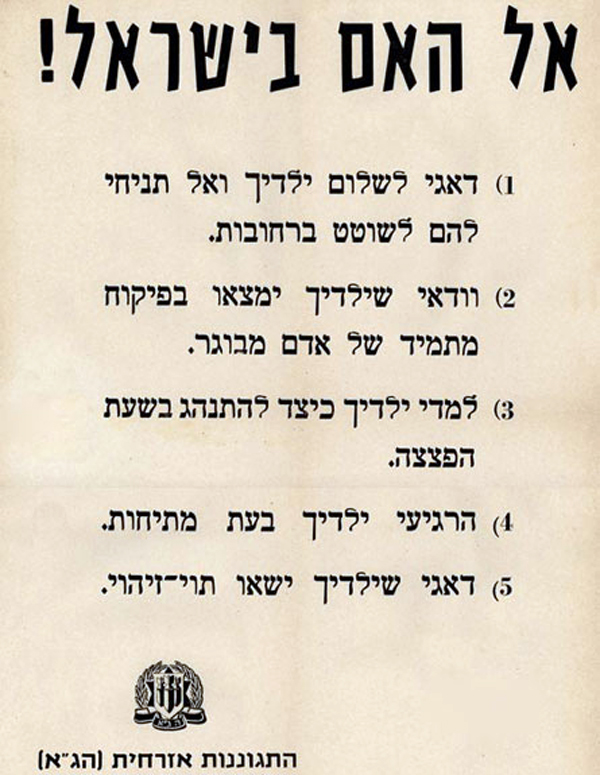 In June 1967, HAGA organized volunteers to fill sandbags that were used to protect homes and public buildings against air raids. 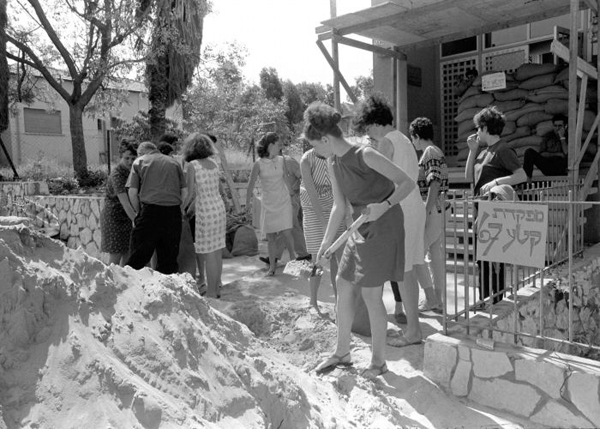 After the Six Day War, as terrorist incidents began to escalate, pamphlets were issued warning people not to pick up small objects that might be booby-trapped — and to this day, every Israeli schoolchild knows to look out for suspicious objects.

Perhaps the most major change came during the 1991 Gulf War when the civil defense policy switched from bomb shelters to sealed rooms and gas masks. In the aftermath of that war, HAGA was reorganized into the Homefront Command and building codes were changed with all new construction now required to include a reinforced safe room.

Since Israel’s pullout in 2005, the ongoing bombardment of towns bordering the Gaza Strip has given rise to other and new forms of fortified spaces including mobile shelters, concrete sewer pipes and even missile-protected playgrounds.

And of course, there’s a handy map to let us know how many seconds we have to take shelter.

A vintage HAGA booklet (image below left) outlines the safest position to take during an air raid. (The full version of the booklet is available on the Homefront Command’s Facebook page). The illustration is remarkably similar to the current one issued by the Homefront Command (below right). 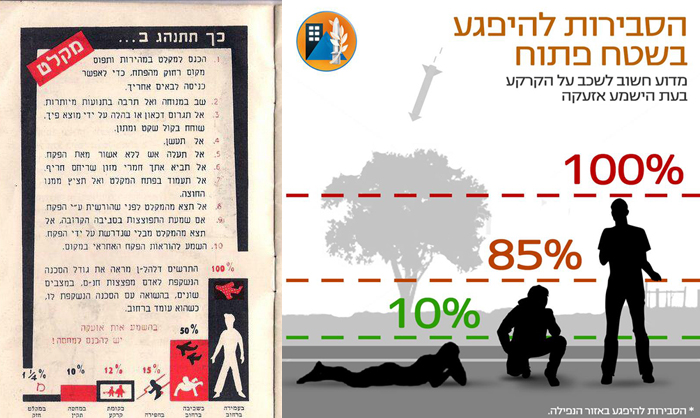 The rules of physics haven’t changed but what has changed is how information is disseminated and the Homefront Command is making full use of Social Media in getting the word out, including enlisting celebrities on Facebook and Instagram to share photos demonstrating the local version of “duck and cover”. The message, as always, is “protect yourself and stay safe”.