FoodScan 3000 from Israel is the only hand-held device that tests food samples for bacteria and provides on-site, immediate analysis – in just three seconds. 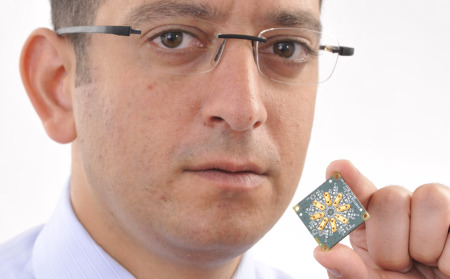 CEO Doron Shalom with MS Tech’s smart sensor technology which is designed to detect the presence of contaminants in the field.

How can you be sure that bacteria are not festering in your food? Dangerous pathogens like Salmonella, E. coli, Listeria and chemical contaminants are responsible for more than 76 million food-borne illnesses a year in the US, according to the Center for Disease Control. Bacteria, viruses and toxins thrive on food that is undercooked, inadequately refrigerated or prepared in places where hygiene standards are lax. One Israeli company, however, hopes to make your food safe from the farm to your fork.

Herzliya-based MS Tech has developed advanced smart sensor technology that can detect the presence of contaminants and related chemicals in just three seconds, in the field.

The company’s innovative FoodScan 3000 is – according to the company – the only hand-held device now on the market that tests samples for bacteria and provides on-site, immediate analysis. In the past, samples had to be sent to a lab for analysis – a time-consuming and costly process. Another benefit is that unlike other testing systems, FoodScan 3000 is green; it does not use radioactive material or ionizing sources.

Food safety is an issue of growing concern worldwide. In the US recent recalls of suspect ground beef, peanut butter and lettuce, are increasing the pressure for expanded food safety inspection. The demand to keep food safe has spawned the food safety and production inspection business, a sector estimated at $2.5 billion annually.

Detecting bacteria in the field

“Our technology can detect the presence or absence of bacteria and contaminants in food before anyone can see or smell them,” Doron Shalom, CEO of MS Tech tells ISRAEL21c. Shalom, who holds a Master’s degree from the London School of Economics, has proven experience in commercializing sensor technologies. He previously served as VP of global sales and marketing at Scent Detection Technologies, providing trace detection systems for aviation and airport security. Those systems were part of the security and screening procedures used at the Beijing Olympics.

Based on an array of High Frequency Quartz Crystal Microbalance (HGQ-CM) sensors and coatings, the technology from MS Tech provides high sensitivity and selectivity in detecting target molecules and can tell you whether or not your food is contaminated in three seconds flat.

Weighing in at just 800 grams and the size of about two iphones, FoodScan 3000 is integrated with HF-QCM sensors that are embedded with smart detection algorithms. The surface of each sensor has a chemical coating that is sensitive to different families of target molecules.

To identify a molecule, the algorithms analyze the data obtained and match it with a library of digital signatures. “Our HF-QCM sensors are extraordinarily sensitive and can reach sensitivity levels of one billionth of a gram,” claims Doron.

Sensors alert you before the rot sets in

Doron gives the credit for this advanced sensor technology to his scientific team at MS Tech, headed by Dr. Lev Dayan, chief scientist and co-founder of the company. Dayan, a leading expert in crystal physics, has more than 40 years’ experience designing and developing electro-chemical sensors. Professor Abraham Shanzer of the Department of Organic Chemistry at the Weizmann Institute of Science has also been a major contributor to the multi-disciplinary team. And the company boasts a high-level board of scientific advisors.

A big benefit is early detection of spoiled food. Sensitive to each contaminant, FoodScan 3000 detects a change in quality at any level, and can provide a relative indication of the contamination level of cheese, milk and other foods.

“Sometimes food leaves the factory top quality, but because it is not stored well, handled properly, or kept at the right temperature, it will begin to spoil,” Doron explains. “When a food or beverage has a bad smell, it can do major damage to the reputation of a brand – not to mention the high costs of product recalls,” he adds.

From food to security

The company’s long-range vision is that one day consumers will be able to scan their own food for contaminants. MS Tech is also in negotiations with manufacturers of food processing equipment to integrate its plug and play sensors into their production lines and inspection processes.

“We can customize the product to the customer’s technical needs at each level in the food chain,” asserts Doron. With a WiFi and GPS connection, FoodScan 3000 can even transmit test results from remote inspection sites.

Privately-held MS Tech is a candidate for a number of technology innovation awards from leading industry analysts. The company expects to begin first deployments with selective companies in the US and Europe this year, and claims that countries in Asia, with high food safety standards, are also keen to use the company’s technology.

The company doesn’t just plan to stop at foodstuffs. Now in the process of setting up a major R&D center to be located in either the south or the center of the country, MS Tech also plans to develop innovative detection products for bio-medical diagnostics (health care centers, private clinics); security (detection of explosives, narcotics); clean tech (air pollution, water monitoring); aerospace (hydraulic fuel leaks, pandemics), and possibly even pharmaceuticals.