As a child in the former Soviet Union, Janna Gur knew little about Jewish holidays. It wasn’t until her family emigrated to Israel when she was a teenager that she learned about the eight-day winter Festival of Lights known as Hanukkah.

“I’ve always loved Hanukkah,” says theTel Aviv-based food journalist and cookbook author. “I love Israeli winter, and I love the songs, and the candle lighting is beautiful. It reminds me of the Russian New Year [Novy God] of my youth.”

But she is not fond of sufganiyot, the deep-fried filled donuts that reign supreme in Israeli Hanukkah food culture.

Oil figures prominently in Hanukkah treats. That’s because of the drops of olive oil that burned miraculously for eight days after the Maccabees recaptured the Second Temple from the invading Greek-Syrians in the second century BCE. 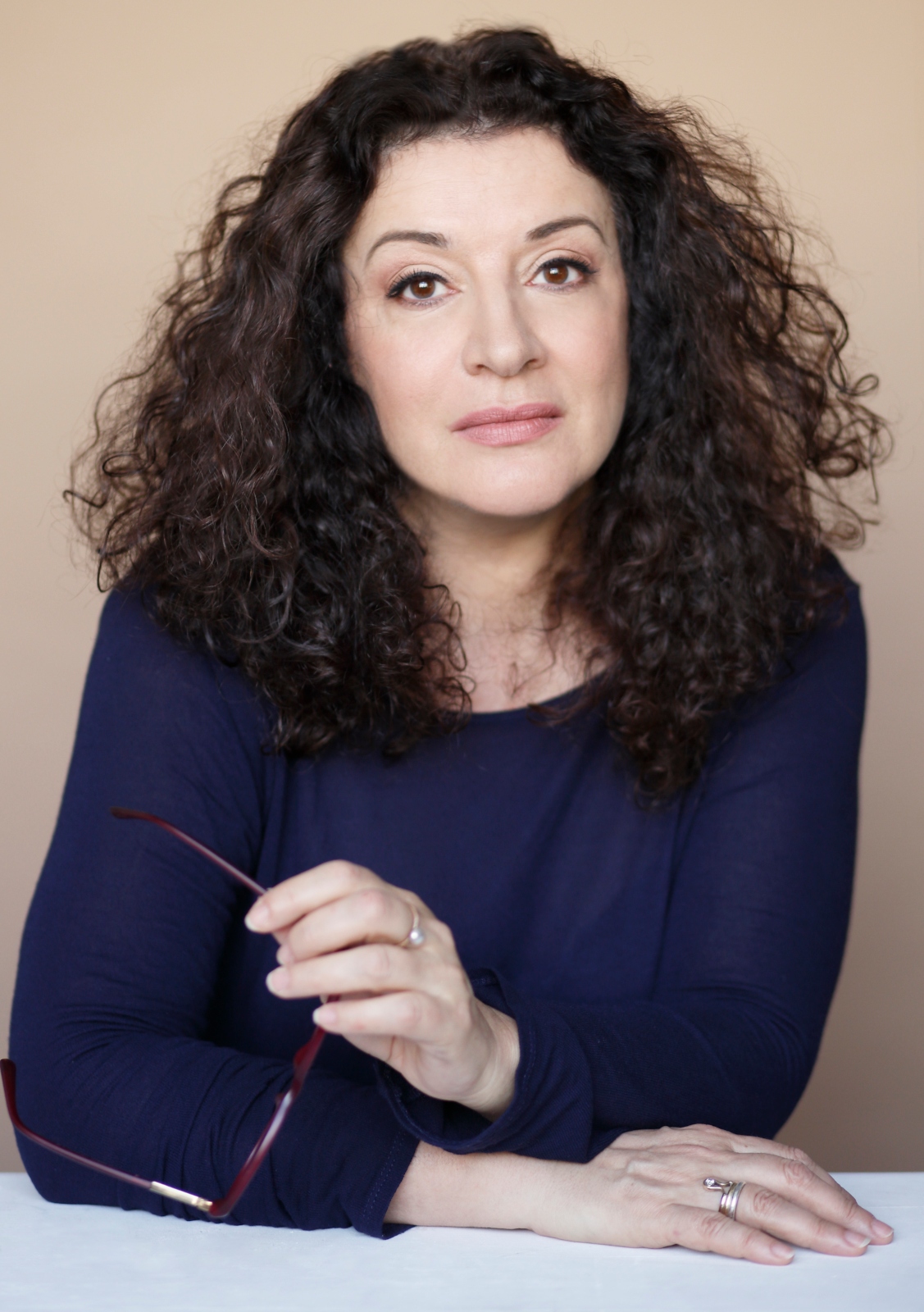 “As time goes by, people are buying rather than making sufganiyot and bakeries are getting crazy with outrageous toppings and not even frying them, which is the whole point,” Gur says.

If we take donuts off the table, what’s left? After all, Gur points out, “There’s no such thing as a Hanukkah meal like you have on Passover or Rosh Hashana.”

Her preference is savory latkes (levivot in Hebrew), the potato pancakes that American Ashkenazi Jews associate most with the holiday.

On her website are recipes for Ashkenazi Potato Latkes, Hanukkah Balkan Potato and Leek Pancakes, and Orna and Ella’s Sweet Potato Latkes. The latter is a rare vegan latke; usually, potato pancakes are bound with eggs.

There’s a recipe for Syrian ejjeh fried vegetable and meat patties in her 2014 cookbook Jewish Soul Food: From Minsk to Marrakesh, an interesting main-dish alternative for Hanukkah.

One is aruk, a patty made of herbs and mashed potatoes, traditionally served for Friday lunch in Iraqi Jewish households.

The other is more evocative of Gur’s Soviet childhood, jazzing up plain potato pancakes with the addition of beets. (See recipe below.) 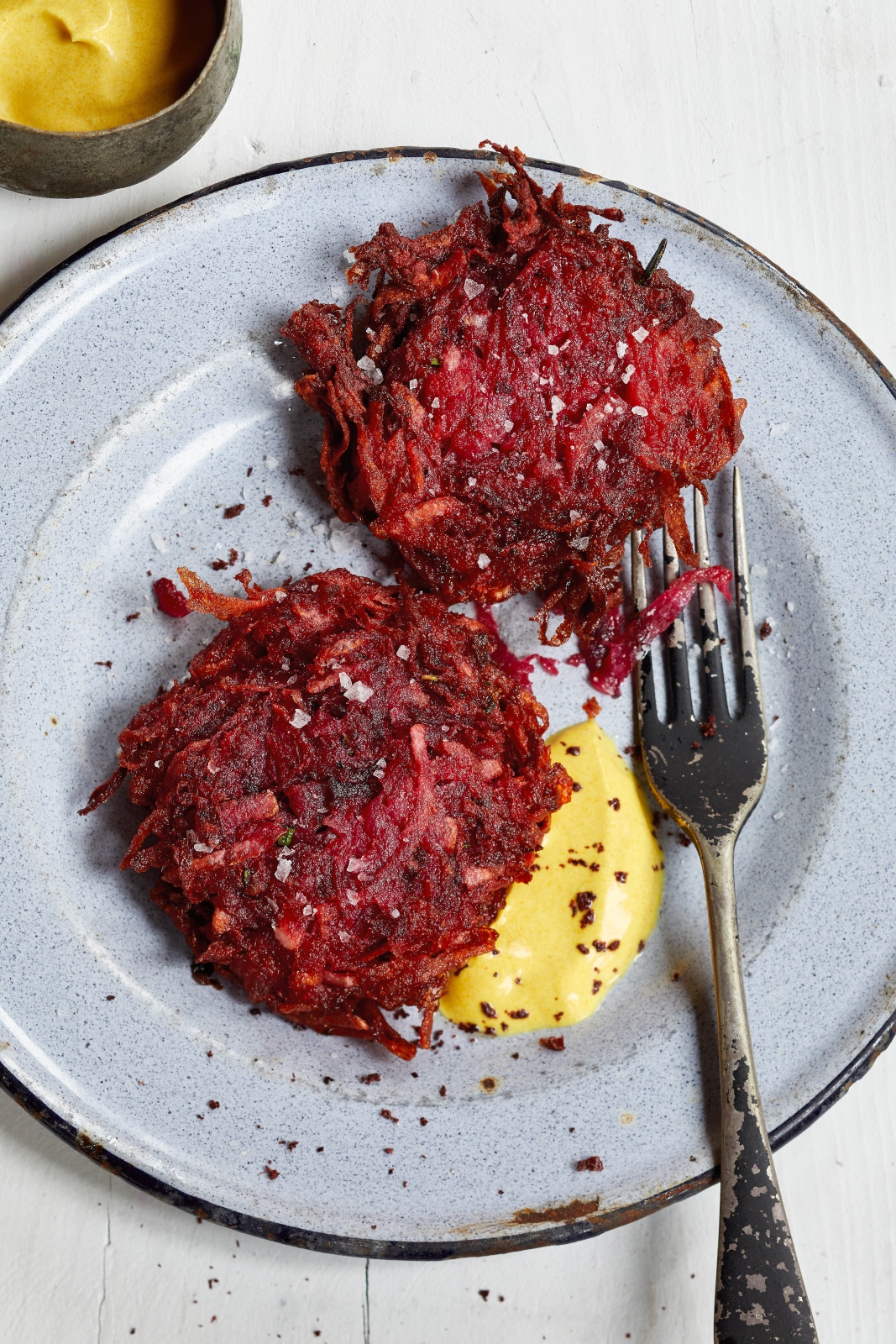 “I’m a beet freak, so when I wanted to give an upgrade to the traditional Ashkenazi potato pancake, beets were my solution,” she writes in the recipe intro.

“Unlike potatoes, beets don’t start turning black the moment you grate them, and they preserve their crispiness a bit longer, so it’s easier to pace their preparation and serving. These crunchy-chewy latkes have just the right hint of sweetness to offset the bright dressing.”

Gur might do up a batch of latkes for her two little grandsons. She’ll be caring for them during their Hanukkah break from daycare and preschool.

“Unlike in the United States, Israelis usually have a Hanukkah party only if there are kids around,” she explains.“It’s always about kids, starting with the candle lighting – preferably with the hanukkiya that they made themselves in kindergarten — while wearing paper crowns.”

And despite her disdain for jelly donuts, Gur realistically anticipates that her Hanukkah babysitting duties may include “having a playdate with sufganiyot.”

The following recipes are excerpted with permission from Shuk by Einat Admony and Janna Gur (Artisan Books), copyright © 2019.

Grate the potato coarsely on the large holes of a box grater or in a food processor using the grating blade. Wrap the grated potatoes in a clean kitchen towel (no fabric softener, please!) and squeeze vigorously to get rid of any excess liquid. Transfer to a large bowl. Do the same with the onion. If you don’t care about staining your dish towel, do the same with the beets. Otherwise, grate the beets and squeeze out the moisture by hand; add to the bowl with the potatoes and onion.

Add the egg, thyme, rosemary, flour, and several twists of pepper and mix thoroughly — your hands are good for this.

Line a plate or tray with paper towels. Fill a large nonstick skillet with vegetable oil to a depth of ¼ inch (6 mm) and heat the oil over medium-high heat. When the oil is hot, stir the salt into the latke mixture, pick up a small handful, and squeeze out even more liquid (depending on the potato and onion you use, you might have quite a lot of liquid).

Shape the mixture into a round, flat patty about 3 inches (7.5 cm) in diameter and carefully add it to the hot oil. Repeat until you have a panful of patties, but with plenty of room between them to flip the latkes. Fry until the latkes are crunchy and slightly browned, about 3 minutes on each side. Transfer to the paper towels to drain. Repeat to form and fry the remaining potato mixture.

Serve at once, with the preserved lemon and yogurt dressing or plain yogurt alongside.

This vibrant yellow, citrusy dressing is a wonderful match to subtly sweet beet latkes, but that’s just the beginning. Serve it on roasted vegetables or panfried or grilled fish, or as a dipping sauce for any deep-fried snack (the acidity cuts right through the fat). It can keep for up to two weeks in the fridge, though it will probably be gone sooner.

Rinse the preserved lemon wedges and remove the seeds. Combine the preserved lemon, jalapeño (if using), lemon juice, water, honey, turmeric, salt, and oil in a food processor and puree until you have a completely smooth mixture — this may take a couple of minutes, so be patient.

Add the yogurt and pulse a few times, until the sauce is smooth and lemony yellow. If not using at once, store in an airtight container in the fridge for up to 1 week.

Variation: Keep the sauce chunky. Instead of mixing everything in a food processor, finely dice the preserved lemon and jalapeño and fold together with the rest of the ingredients.

Combine the lemons, salt, turmeric, sugar, and 3 cups (720 ml) water in a medium saucepan and bring the water to a boil. Reduce the heat to low and simmer, stirring occasionally, for about 1 hour, until the lemons’ flesh has broken down and the rinds are very soft.

Drain thoroughly and transfer to a clean, dry jar with a lid. Pour in just enough oil to cover the lemons. Seal the jar and store in the fridge for up to 1 month. Use a clean, dry spoon or fork (never your fingers) to remove the lemons from the jar as needed. Give them a quick rinse and remove any seeds before using.