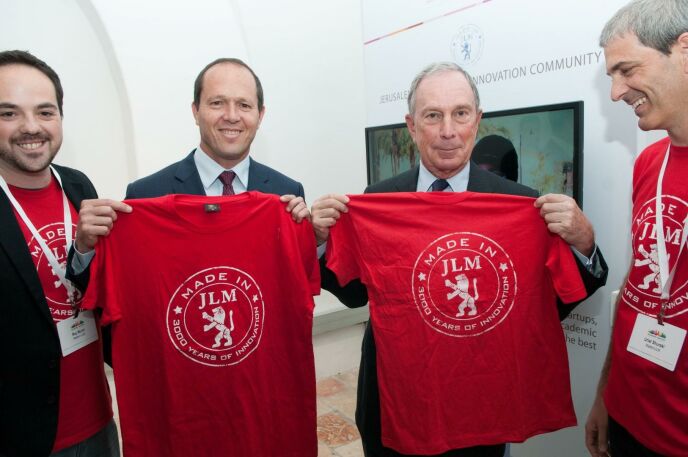 “Just two years ago we were starting our first startups in Jerusalem. We felt alone, and we were wondering when we will have saved enough money to move to Tel Aviv. Two years later, the Jerusalem startup scene is booming,” posted Jerusalem entrepreneur Roy Munin on Facebook last May.

“Never before has the city been so proud and supportive of its innovative community. This is the beginning of something big and exciting.”

Indeed, it is difficult to capture a snapshot of the capital city’s startup culture because of its rapid evolution.

“When I started at JVP [about three years ago], I would go to Tel Aviv events two or three times a week and find startups, and I asked myself why we didn’t have these things in Jerusalem,” says Brand. “Every startup here thought they were the only ones. It was time to bring them all together.”

Jerusalem is home to more than 300 startups in media, communication, software, life sciences and energy, including recent standouts such as uMoove, ZUtA Labs, AnyClip, OrCam and BriefCam. Last year alone, $110 million of deals were made involving 35 new Jerusalem-based startups.

In March 2014, the Jerusalem Development Authority (JDA) launched “JNext” to promote and support the tech sector. At the kickoff, Danna Hochstein Mann of the OurCrowd equity crowd-funding VC described Jerusalem as a “hotbed of people doing creative, interesting, out-of-the-box kinds of things.”

“I realized I was doing my startups in Tel Aviv, driving 14,000 kilometers per year, and why? Why not bring out a tech community in Jerusalem? It was a trigger for me to open my own community of tech people that could be geeks, scientists, business developers, consultants … everybody’s welcome to share information about the latest trends, hands-on experience, methods, hacks, tools — and meet awesome people.”

Many new initiatives are creating a buzz in the capital city.

Shared workspaces/networking hubs are opening here: the Jerusalem Startup Hub-Center for Entrepreneurial Innovation; the Jerusalem Hub; Open Hub in the National Library; Parnassa for the ultra-Orthodox sector, Musrara Community Hub for design, art and software entrepreneurship; and PICO, which is also a gallery for upcoming Israeli artists.

JDA’s BioJerusalem program for the thriving life-sciences cluster has helped Jerusalem surpass the Rehovot-Ness Ziona area as the leading locale for new biomed startups in Israel.

Business accelerators have been formed at the Hebrew University, Jerusalem College of Technology, Azrieli College of Engineering and Bezalel Academy of Art and Design. And the Forum for Young Entrepreneurs in Jerusalem was established by the Jerusalem Center Young Association and the MATI Jerusalem Business Development Center. 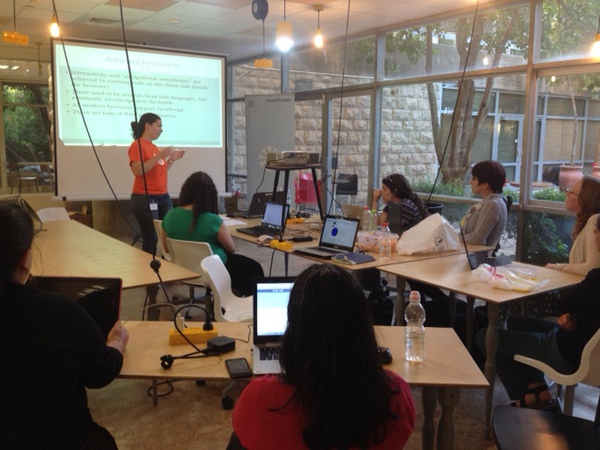 She Codes hack night in Jerusalem.

She Codes (“It’s not your mother’s C++ anymore”), a group promoting female software developers, meets weekly not only in Tel Aviv, Haifa and Beersheva, but also in Jerusalem on Monday evenings. She Codes was started by Ruth Polachek, who in 2008 founded the eClub (entrepreneurship club) at Hebrew University, one of the first of its kind in the city.

The Google Developers Group (GDG JLM) of 184 gamers has been meeting weekly since March at the Hansen Center for Design and Technology “to create and advance the development and design ecosystem in the city.”

Other specialty groups popping up across town include the Haredi Hi-Tech Forum for ultra-Orthodox men and women, the Moshava Startup Breakfast Club in the German Colony area, and a local branch of ImaKadima for career-minded young Israeli moms.

Business development consultant Joe Van Zwaren, who helped establish the Jerusalem Business Networking Forum (JBNF) in 2007, looks at all the networking and business groups forming in Jerusalem with great satisfaction.

“Jerusalem is a city where people did not have a network culture, and suddenly things are happening,” he tells ISRAEL21c. “In 2007, people had to go from group to group to make deals and find jobs and investment, because each group specialized in a different population.”

JNext signals that the municipality has at last “recognized this incredible mechanism for generating business,” van Zwaren says. “The JDA has a dynamic young team pushing resources into this.”

Thanks to JNext, he says, business-minded students at Jerusalem’s schools of higher education “have suddenly discovered there are forums to make connections with people they ordinarily wouldn’t know, especially in biotech. The JDA is even starting an internship program for new PhDs and post-docs to get into Jerusalem biomed industry.”

Though he believes much is yet to be done, van Zwaren is more optimistic than ever about Jerusalem’s startup scene, which he long felt was getting marginalized by the higher-profile scene in Tel Aviv.

“I am now seeing an infrastructure to help people with zero funding get launched. It’s a whole new culture that’s been created out of nothing.”

UNCOVER ISRAEL - Get the ISRAEL21c
Weekly Edition free by email
Sign Up Now!
Bring Israel's story to life.
Millions of people around the world rely on us to gain a deeper understanding of Israel. We are the trusted source for original content you won't find anywhere else.
You can make a difference. Donate today to support journalism that brings Israel’s story alive.
SUPPORT ISRAEL21c
Read more on:   Uriel Shuraki, Nadav Lankin, PICO, BioJerusalem, MadeinJLM, Jerusalem Entrepreneurs Society and Technology, Innovation, Technology, JVP, OurCrowd, JDA, Business