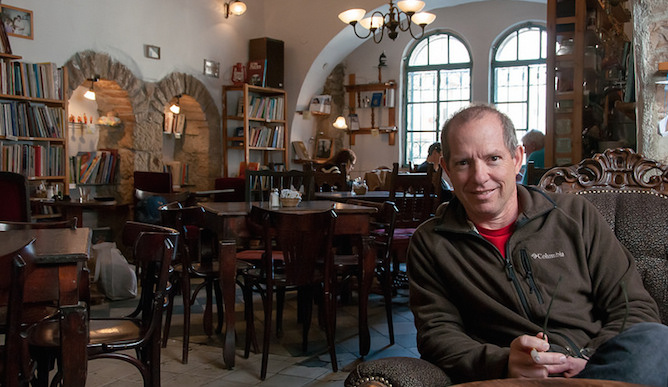 “Books are the neshama [soul] of this place,” says Ehrlich. Photo by Irit Elad

While sharing a plate of warm-from-the-oven banana bread in his Jerusalem bookstore café, Tmol-Shilshom, David Ehrlich makes a confession: As the iconic café nears its 20th anniversary with a full calendar of literary events, he sometimes wonders why he opened it.

The restaurant business is tough, the book business is flat, and Tmol-Shilshom is in a location that, albeit charming and historic, is remote from foot traffic.

And yet the café on the second level of a 150-year-old building in the downtown Nahalat Shiv’a neighborhood perseveres with a flow of steady customers and tourists. Its A-list author nights attract a crowd, and its out-of-the-way ambience makes Tmol-Shilshom popular for blind dates and marriage proposals among couples ranging from Orthodox to same-sex.

“Sometimes I think I’m crazy to run my little community center here,” he says with a smile even as he tends to details about the anniversary bash planned for the evening of June 26.

Born in 1959, Ehrlich was raised in Ramat Gan aside from two pivotal years in Jerusalem when he was five and six.

“That was when I fell in love with Jerusalem, in a way that determined my life. My first move, once I was out of the army, was to Jerusalem and I’ve been here ever since except for four years abroad.”

During that time, mainly teaching college Hebrew, Ehrlich was taking a breather from a successful career as a journalist. His last position was as a features writer for the daily Haaretz.

“After four fun and fascinating years abroad, I came back here knowing I belonged here. But having experienced so many different things, I realized I could recreate myself, which led to opening a business,” Ehrlich tells ISRAEL21c.

“I come from a family of teachers, and my father freaked out when I mentioned the idea of going into business. But I had seen bookstore-cafés in the States and I always liked them. One thing led to another and I ended up doing it.

“I still have my moments of regretting it. It’s incredibly difficult, and it has become more difficult in the past few years to sustain a small business. Plus, my father was right: It’s not my thing. I have done something unique and I’m very proud of it; at the same time it’s never become a smashing business success. We’ve had many crises over the years.”

‘Some sort of miracle’

Tmol-Shilshom (Only Yesterday) is named for a novel by the Nobel laureate S.Y. Agnon, a stalwart of Jerusalem until his death in 1970. The bookstore-café’s 1994 opening featured a reading by Israel’s beloved poet Yehuda Amichai.

“He kept coming back, not only to read, for years,” says Ehrlich. “He took a real active role here and we became pretty close, thanks to this place.”

Amichai passed away in 2000, but prominent Israeli authors such as Amos Oz, A.B. Yehoshua, David Grossman and Batya Gur – and foreign talent, including Nadine Gordimer from South Africa – have continued to be a presence at Tmol-Shilshom.

Ehrlich says he chose the quirky location because he didn’t have enough cash to land a prime spot on the main street. He poked around downtown Jerusalem’s alleyways searching for a place with character and a hint of romance.

Though he is not religious, Ehrlich says that finding the tiny courtyard sandwiched between busy Jaffa Road and narrow Yoel Solomon Street “had some sort of miracle about it. It felt like something beyond me was happening.”

Nahalat Shiv’a was one of the first neighborhoods built outside the Old City walls. Originally residential, by the 1970s it was becoming a trendy area for shops and eateries. When Ehrlich wandered into this particular courtyard, a jeweler was working out of what is now Tmol-Shilshom’s kitchen and offered to show him around.

“He had the intuition that what I had in mind would be fitting and would serve us both well. We have been great neighbors ever since.”

After a few years, Ehrlich took on a partner, Dan Goldberg.

In his private life, Ehrlich is the father of six-and-a-half-year-old twins and lives in the neighborhood of Beit Hakerem not far from Mayor Nir Barkat. This is where he had lived for those two years in the 1960s while his father was studying at the Hebrew University.

He also is a novelist and playwright whose latest work, Who Will Die Last: Stories of Life in Israel, was published in 2013 in English translation by the Syracuse University Press.

Finding time to write is tricky when one owns a business open from 8:30am till 1am (except Shabbat).

“Today I scribbled three ideas that I’m happy with. I don’t know if I will sit tonight and scramble that omelet, but having ideas gives me great energy,” says Ehrlich. “I recently completed the first draft of a new book set in a café. Most of the events in the book are totally fictitious. I have many stories from real life, but I don’t use them when I sit and write.”

There are few places like Tmol-Shilshom in Israel. A bookstore-café in Tel Aviv called Tolaat Sefarim (Bookworm) is more bookstore than eatery, while Tmol-Shilshom sells much more food than books.

“But needless to say, books are the neshama [soul] of this place,” he says.