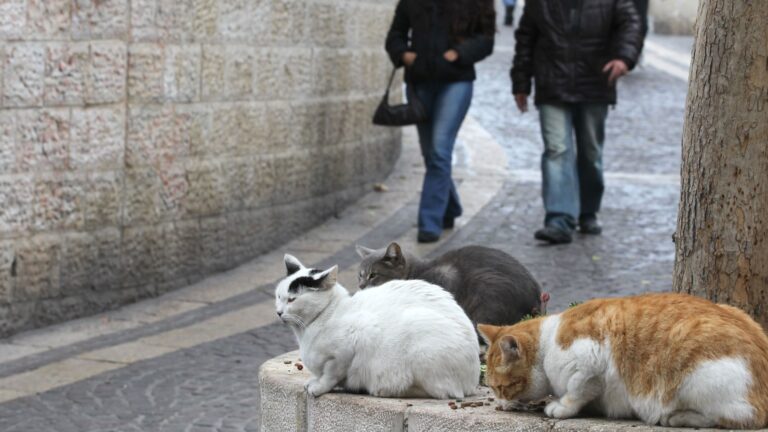 Anybody who’s been to Jerusalem knows that street cats are everywhere. Most of the strays get their food from the open trash bins across the city.

However, those bins are starting to be phased out in favor of underground garbage receptacles – a move that is better for aesthetic and health reasons but catastrophic for the cats.

So as one of his first initiatives since taking office on December 4, 2018, Jerusalem Mayor Moshe Lion gave the stamp of approval to a proposal by city councilmember Yehuda Ben-Yosef to set up and stock feeding stations for cats in those neighborhoods with underground trash bins.

An annual budget ₪100,000 ($27,685) was allocated to building and supplying the feeding stations. The municipality will provide 210 18-kilo sacks of cat food per month.

Ben-Yosef also met with about 70 Jerusalem residents who already feed street cats to discuss how they can work with the municipality for the welfare of the street cats.

The attendees agreed to form committees to help the city deal with problems such as cats getting trapped when falling into partially open underground trash bins; finding philanthropic funds for expanding veterinary services for injured strays; and educating local schoolchildren about the importance of spaying and neutering.

For the past five years the municipality has been catching, spaying and neutering 2,000 to 2,500 feral cats each year and releasing them back to the streets. But that’s a drop in the bucket. Israel as a whole has an estimated population of 2 million street cats and nobody knows exactly how many are in Jerusalem.

“The feeding stations will encourage more people to feed the cats in the neighborhoods,” says volunteer Tali Ben Atar, who feeds feral cats, raises money to treat injured cats, and finds homes for kittens. For more information, contact her at tali190298@gmail.com.

And in case you were wondering: The new mayor’s last name is spelled in English like the feline king of the jungle, but it’s pronounced “Lee-own.”