Students and storeowners are working together to turn a trendy Beersheba street into a socially and environmentally conscious destination for locals.

The street festival swings into action on Ringelblum Street.

Three thousand celebrants, many of them students from Ben-Gurion University, put on their party hats for a street festival on Beersheba’s Ringelblum Street, to pay tribute to the vendors’ wholehearted support of a social awareness project.

Adar Stern, a BGU political science and history student and one of two Tav Chevrati volunteers who spearheaded the initiative, had been planning the party with business owners since the summer.

“I wanted to thank them for joining our program by bringing many students and clients to the street,” she tells ISRAEL21c.

Stern and a wheelchair-bound companion spent the past year marshaling the support of the municipality and its social welfare organizations, along with the BGU Student Union, in its quest to certify the businesses of Ringelblum Street, which abuts the northern side of the campus.

The program that grants a social “kosher certificate” is part of the non-profit organization “In the Circles of Justice” (Bema’aglei Tzedek in Hebrew) and operates also in Jerusalem, with about 30 volunteer supervisors performing monthly spot checks of its 350 certified businesses throughout Israel. It is estimated that thousands of visitors choose to patronize “Community Covenant”-certified businesses over the course of a few months.

Stern’s ultimate goal is to promote those establishments that display a “Community Covenant” certificate. “We want to encourage students to patronize only places that are socially and environmentally conscious,” she says.

BGU’s nearly 20,000 students are integral to the profitability of the street and surrounding area. A new gate installed about eight years ago, leading directly to Ringelblum Street from the campus, helped revitalize it as a student destination.

Stern’s initiative had the cooperation of the municipality and its social welfare agencies – Mayor Ruvik Danilovich was among the revelers at the street party – and of Matan Yaakov Golan, founder and director of the local Center for Neighborhood Sustainability.

“We have a common purpose as Tav Chevrati,” says Golan. “We are building a model for making the neighborhood more sustainable, the environment greener and safer and healthier, and society more united in this cause.”

Mayoral assistant Zvika Cohen says the municipality is working with Stern to plan future events, and is offering “Green Business” loans to participating entrepreneurs to help them with costs incurred by setting-up recycling and composting facilities. Beersheba also trains business owners to monitor and reduce their water and energy usage. 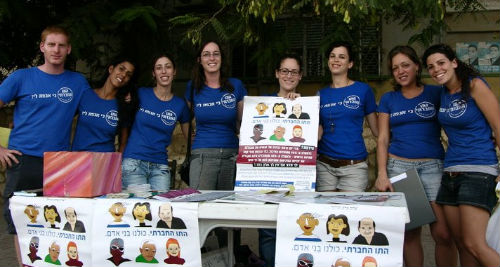 Some of the student team who helped business owners plan the party to celebrate the social awareness project.

BGU Student Union president Uri Keider happens to live on Ringelblum Street, which is about a quarter-mile-long and includes “Community Covenant”-endorsed establishments such as two pubs, a bookstore/café, an Indian restaurant, a sushi place and a coffeehouse. Several of the businesses employ underprivileged youth or people with disabilities. This type of atmosphere helps brand Ringelblum as a hip and socially conscious block.

“The street has been evolving into something very special,” states Keider, who’s working with Stern to organize a Purim street party on Ringelblum in March. “We were not in it from the start – it came from the store owners and the municipality – but we were happy to join when we saw what a great project it was.”

Stern is hoping to take the project even further: “Now we want to strengthen the project and enlarge our volunteer force to approach more businesses and increase public awareness of certification.”