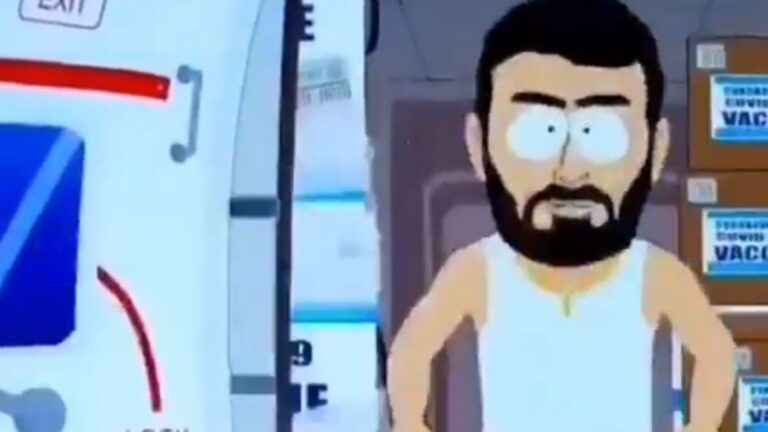 A stereotypically Israeli man hands out vaccines to the residents of South Park. (Screenshot/ Twitter)

Israel’s Covid-19 vaccination rollout got a shoutout on the latest South Park episode, which was dedicated to the first anniversary of the global pandemic and the burning issues surrounding inoculation in the United States.

Israel’s successful vaccination effort got two mentions on the show – both overall positive but not devoid of the sarcastic South Park treatment.

Hey @nbcsnl: this is how you do pandemic humor when it comes to Israel. Watch and learn from @SouthPark pic.twitter.com/miMAS0dwry

The first mention saw a man standing in line lament the state of vaccinations in the town of South Park.

“You know, in Israel they vaccinate everybody. Israel is way cooler than this lame place,” he says.

To which the guard at the front of the line replies, “So then go to Israel.”

“I tried. I couldn’t get in,” the man answers, in a jab of Israel’s closed airspace.

The second mention saw a plane suspiciously similar to those chartered by Israeli airline El Al – called “Air Israel” – landing in town to cheering crowds. It is loaded with endless boxes of vaccines that are distributed by a stereotypical-looking bearded muscular man wearing a white tank top to the sounds of a terrible estimation of Middle Eastern Music.

“It’s Air Israel with enough vaccines for every adult in town!” exclaims one of the characters.

Considering how others fared on this show over the years, this is as good as it gets.