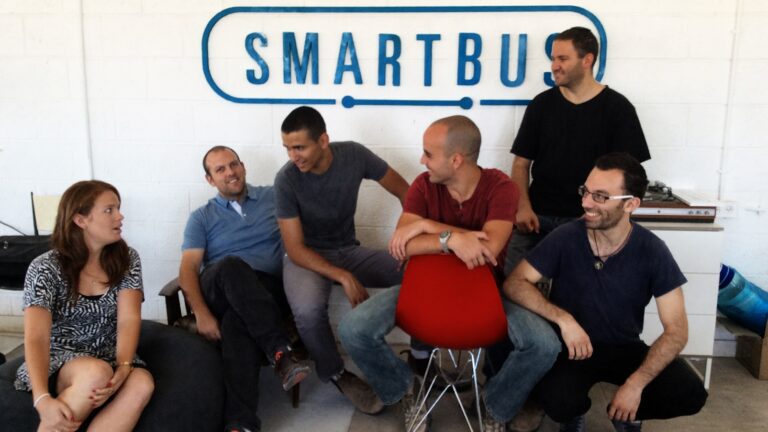 Yishai Cohen (middle, in gray shirt) with the SmartBus crew in Jerusalem. Photo courtesy of SmartBus

The SmartBus app developed by a Jerusalem teenager has been so successful in Israel that now it’s starting a pilot in California – an ambitious goal for a company that only just launched its English-language website on August 17 (along with Russian and Arabic to complement the existing Hebrew site).

Yishai Cohen, now 19, started SmartBus when he was in MIT’s Middle East Education through Technology (MEET) program that nurtures entrepreneurship in teens from diverse sectors.

The app went live in February 2015 across Israel. In May, SmartBus won ₪20,000 in the #JerusalemApp Smart City Contest for improving transportation and urban infrastructure.

SmartBus helps users find the best deal on bus transportation, whether a regular route (such as a workplace shuttle) or a one-time ride to an event. With one click, users get quotes from participating companies and individual bus drivers – about 1,600 drivers in all. As of now, more than 40,000 monthly trips are arranged through SmartBus.

“We believe that our technology will make a real change for the way customers order and use private bus services,” says Cohen.

Cohen tells ISRAEL21c he chose California for the self-funded small pilot because “it’s by far the biggest market in the US for bus transportation. It’s an $8 billion market with an annual growth of 2.7 percent. We will see over the next few months if the market works the same way in California as in Israel.”

The Jerusalem-based company has expanded its staff to seven, recently hiring a director of business development, a chief marketing officer and another software developer.

SmartBus takes a cut of every booking from the service provider, and Cohen says the business is already profitable in Israel, “but we will be raising investment soon.”