It was a nightmare: Half of the school’s outlying wall was ripped off in a storm as rainwater runoff caused more than $150,000 in damage.

But science teacher Amir Yechieli, 61 and father of two, saw the disaster as a chance to save the day. Yechieli had studied storm water runoff in the Sinai Desert for a master’s degree. He knows how it flows.

Yechieli figured that the same vast amount of winter rain that ripped the school apart could bring it back together. It could be used to flush the toilets and help better the students’ future ecologically.

“When I saw this, I calculated how much rain there could have been and figured out that the school roof could supply six months of water to the school. I turned to the principal and she said, ‘Good idea,’ and referred me to some funds. I got the funding and the next year I built the first system in the country,” he tells ISRAEL21c.

That was 15 years ago. Now, more than 120 schools later and heading a new company called Yevul Mayim, Yechieli is helping the nation of Israel collect rain.

By day, he teaches science at several schools near Jerusalem. By afternoon, and whenever else he can, Yechieli works with students and teachers to set up rainwater collection systems on the roof. He often does this on his own dime.

It only rains for about half the year in Israel. But this is enough to collect about 100 days’ worth of water at schools, Yechieli estimates.

With an initial capital expense of about $10,000, it takes about seven or eight years to pay back the investment in water savings, but that investment is worth gold.

Another winning aspect of his low-tech design is several small catchment bins, instead of pouring all the rainwater into a huge tank. The smaller bins act as filters. Yechieli also developed a way to drain off the sand and debris from the bottom so the sum result is clean and tasty water.

He is against patenting the idea on principle.

The Yuval Mayim system is built with the kids, and they monitor it every day. Beyond the gallons of water saved, the children learn to notice unusual leaks in the system, saving damage from occurring. They even report leaky toilets.

Yechieli says that one school spotted a leaky pipe that, left unrepaired, could have caused hundreds of thousands of dollars in damage underground.

The result of water education hits home to Yechieli, an environmentalist.

“The need for Israelis to conserve water is going down the drain now that we have desalinated water,” he says. “People will just keep using more and more in their gardens, while the CO2 production from desalination will grow steadily. Not to mention marine pollution or the fact that we pour into the sea twice as much as we desalinate.”

His projects have peace appeal, too. Yechieli has done projects that bring together Israeli Arabs and Jews, Israelis and Jordanians from schools with rainwater harvesting systems. 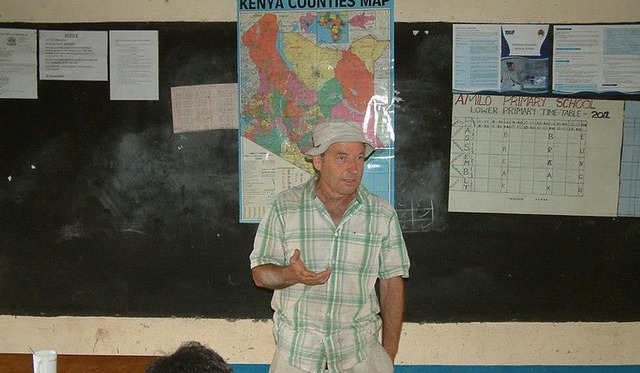 So influential has Yechieli been in the Israeli education world that he is now dealing with policy-makers on how to manage the 20 percent of rainwater that would otherwise flow to the sea.

At first, when he tested the waters of using collected rainwater in toilets, city engineers were opposed. They didn’t want the headaches of managing and overseeing new infrastructure, and they worried that there might be some mixture between clean drinking water and unpurified rainwater.

However, the idea finally got a rubber stamp of approval.

“The major issue here is those kids,” says Yechieli. “When they grow up [and work] in influential places in government or wherever, they will be better citizens of this country.”

He believes schools are a place to educate and to change awareness. There are now schools in Israel, thanks to Yechieli’s chutzpah, that are installing rainwater catchments and toilet intakes from the beginning of construction.

And word has spread beyond Israel. Tag International flew Yechieli to Kenya to help build a system to provide water savings to some 600 villagers who had no running water. People were drinking from ditches, yet they had tin roofs that could collect rainwater year round.

“They don’t have money and they don’t have ideas. Even when USAID tried to help, the ideas didn’t stick. If you don’t include the people in the project, they won’t care about it,” says Yechieli.

In addition to continuing the project with Kenyan officials, Yechieli got funds from the Jewish National Fund to develop a rainwater catchment system at Kampala University in Uganda.

The university spends a whopping $15,000 a month on water despite being surrounded by lakes. Because the water sources are polluted, it takes an enormous amount of energy to purify the water.

Israel’s “rain man” thinks he can help. He is going in November to assess the needs of the project.

“I would imagine that by spending $30,000 they can save half the cost of water bills for the rest of their lives,” Yechieli estimates.

Yuval Mayim operates on a shoestring budget, with just two employees: Yechieli and Paul Lichtenstein. They are based in Jerusalem, and no doubt business will pick up as the first rains of Israel’s winter season begin to fall.