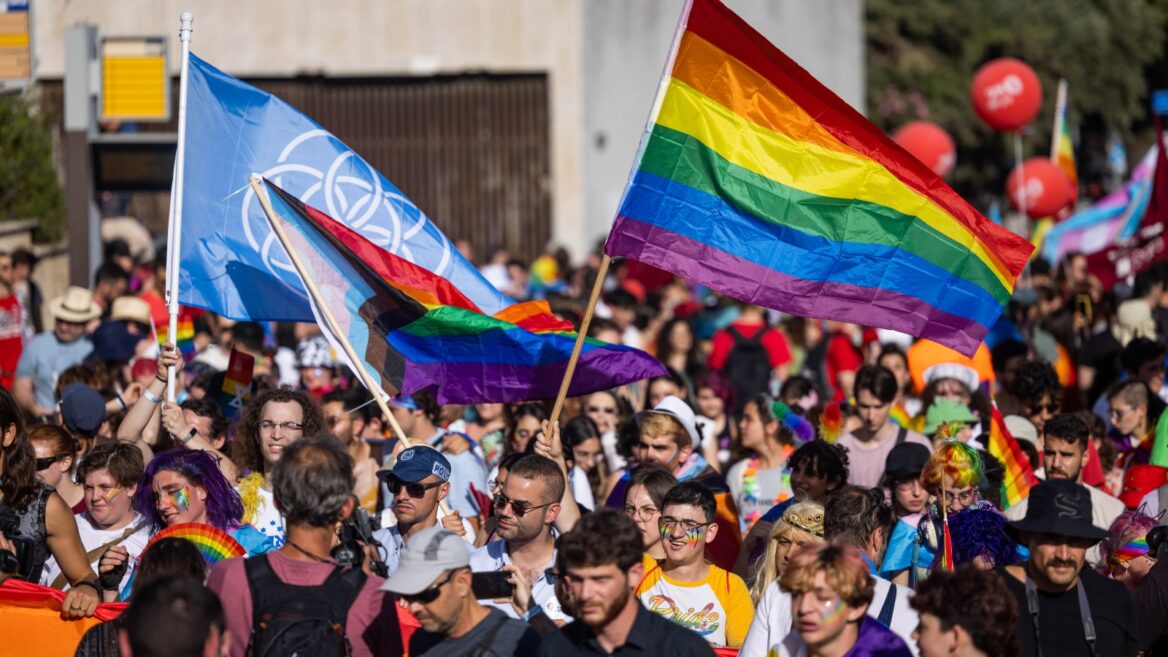 As Tel Aviv’s Pride Month comes to a conclusion with the annual Pride Parade on June 10, the LGBTQ community is celebrating overcoming one of the biggest hurdles to full equality.

According to Supreme Court Decision 781/15, the Gestational Carrier Agreements Law was amended, effective January 11, 2022, lifting the ban on surrogacy for same-sex couples and single men.

Although Israel has been a developing gay-friendly country since 1963, until now same-sex male couples and single men who wanted a biological child had to travel abroad to find surrogates. 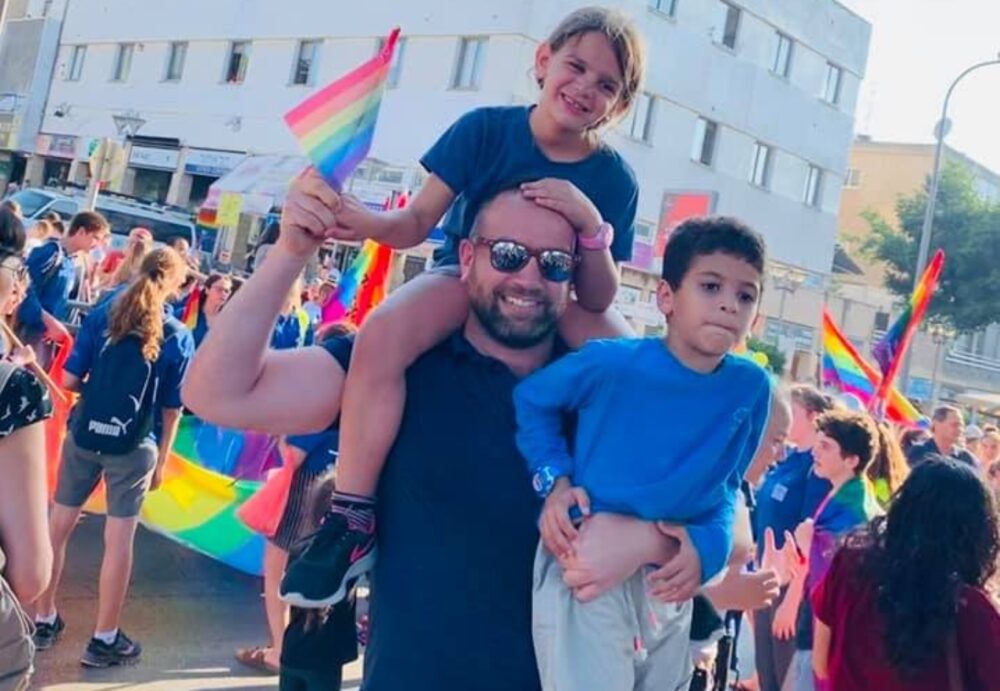 Asaf Rosenheim lives in Israel with his 10-year-old twins, who were born in the United States to a Jewish surrogate from Wisconsin, using an egg from a Jewish donor.

At the time of the pregnancy and birth, Rosenheim and his then-partner were living in New York City, a relatively short plane ride from Wisconsin where their twins “were growing in the womb of a woman that until a few weeks earlier had been a complete stranger to us, but with whom we developed a close relationship,” he explains.

Although a decade has passed since the birth of the twins, Rosenheim still refers to the journey of finding a surrogate, as well as the surrogacy itself, as “an emotional roller coaster.”

“I can’t imagine how hard it must be for expectant fathers who live in Israel and whose surrogates are so far away, added to the expense of traveling to and from North America,” he says.

Additionally, “We had to convert them as babies in order for them to be registered as Jewish in the Interior Ministry,” Rosenheim explains. “And they are still not recognized by the Israeli Rabbinate as they are being raised by two fathers.”

Reacting to the recent change in the law, Rosenheim says: “Surrogacy is a complicated process for anyone, and the change isn’t necessarily going to have a positive effect on every single gay Israeli man seeking to build a family with the help of a surrogate.”

However, he considers that “equality has been achieved in regard to the ruling on this law, and that in itself is a positive thing.”

Rosenheim points out that “a new conversation has begun.”

“Gay men who previously had no reason to communicate with Israeli surrogates are now having a lively discussion and building bridges to a better understanding.”

Daniel Jonas and Uri Erman are among the first 10 couples to assert their right to a Jewish surrogate in Israel. They are waiting for the end of June to start the procedure in Israel.

When Jonas and Erman met in 2010 at a Purim party hosted by the religious gay organization Havruta (of which Jonas was a founding member), it was love at first sight.

Within four years, they were married in a civil ceremony in Denmark, where Jonas – son of a Danish father and a Swedish mother — had spent his first two post-army years as a Jewish Agency representative. 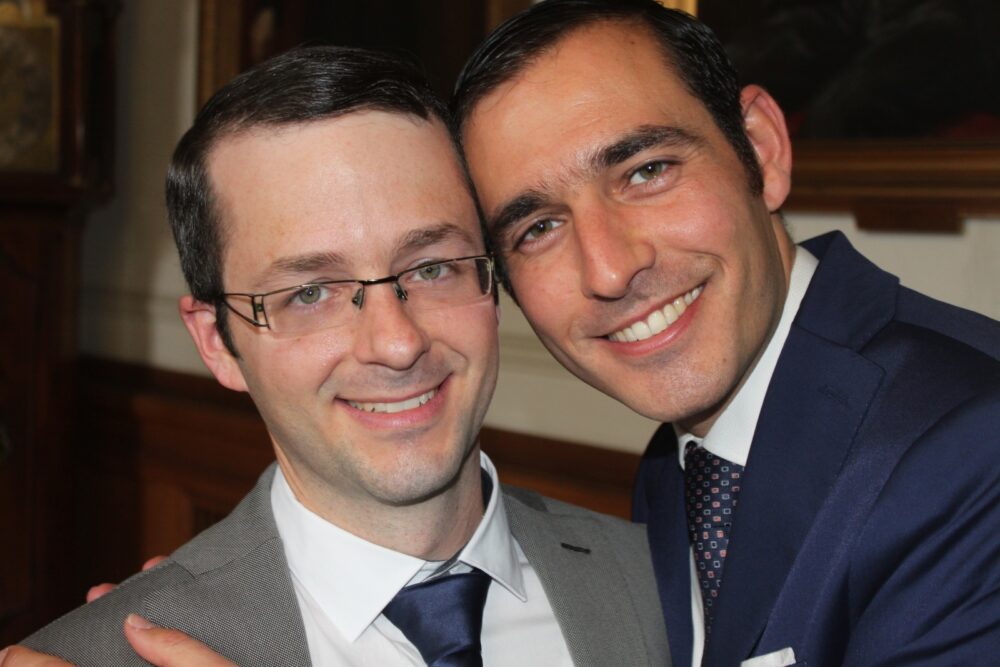 Uri Erman and Daniel Jonas at their wedding in Denmark 2014. Photo by Danny Tzur

“Originally we thought the wedding would be just us,” says Jonas, but their parents and siblings came, along with Danish friends and others who flew in from New York, Berlin, Warsaw, Sweden and Israel.

“In total we were about 45 people,” says Jonas. “The whole thing turned into an entire week of celebrations.”

Jonas notes that the Orthodox rabbi of the main synagogue in Copenhagen congratulated the couple on their wedding, as well as the Chadad rabbi who approached them and wished them “All the best in the world.”

Five years later, Jonas and Erman began to think it was time to enlarge their family.

“It all started three or four years ago,” says Jonas. “We began to collect information and to go to all kinds of meetings here in Israel about surrogacy abroad – as at that point there were no possibilities for us to have access to a surrogate here in Israel.”

They were leaning toward finding a surrogate in Canada, where the process is entirely altruistic and good healthcare is provided to the woman.

They began all the medical checkups in Israel, and then Covid broke out and Canada closed its borders.

By the time it reopened to tourism in 2021, July had brought with it news of the amendment to the surrogacy law, which would be implemented six months later.

Jonas and Erman decided to put Canada on hold, “and see what happens in Israel.” 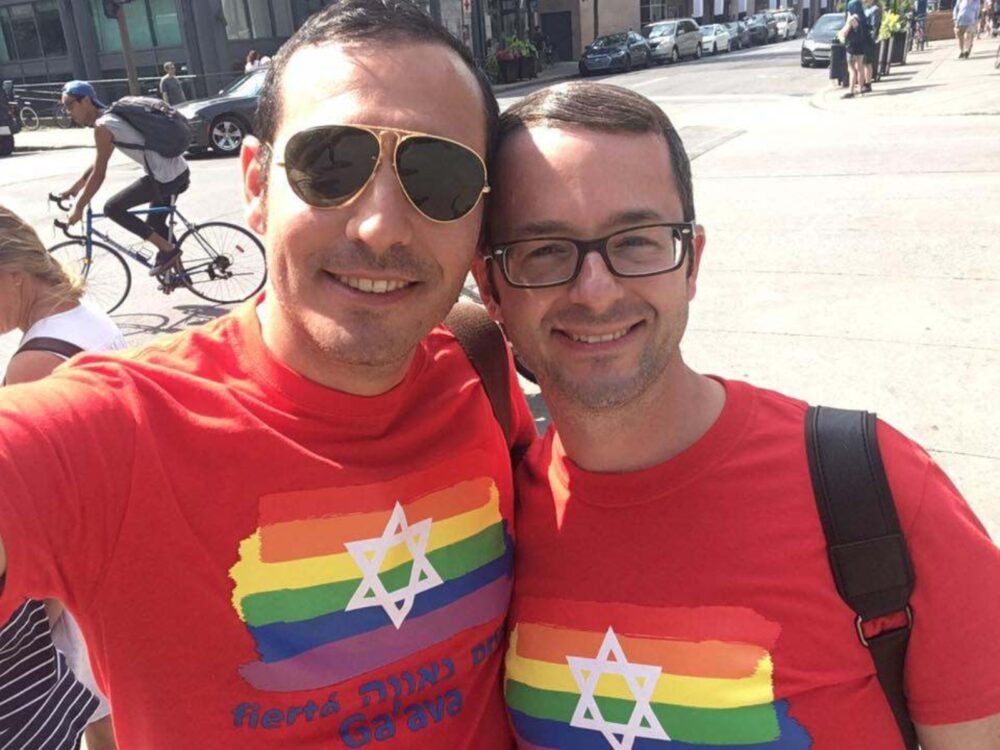 “We quickly realized that one of these three women was ‘the one’,” says Jonas.

They got the go-ahead from the Board for Approval of Surrogacy Agreements, briefly expedited after an application that included some medical and other paperwork, along with a psychological evaluation of the couple’s capacity “to be nice parents.”

“Now our potential surrogate is collecting her papers to submit them by the end of June. We very much hope to be able to continue the process here in Israel.”

A considerable advantage to being able to have access to a local surrogate is that the child is recognized as a Jew upon birth.

“According to most rabbis and poskei halacha [Jewish law decisors],” says Jonas, “the only person who dictates whether the kid would be Jewish is the carrying mother.”

He explains that just as a child is accorded a “firstborn” status if there have been no previous pregnancies in that womb, so it is the womb that decides the status of the child.

Zehorit Sorek heads the LGBTQ Department of the Ramat Gan municipality and lives in Tel Aviv with her spouse, Limor, and their children, Tzvi-Bar and Ariel. 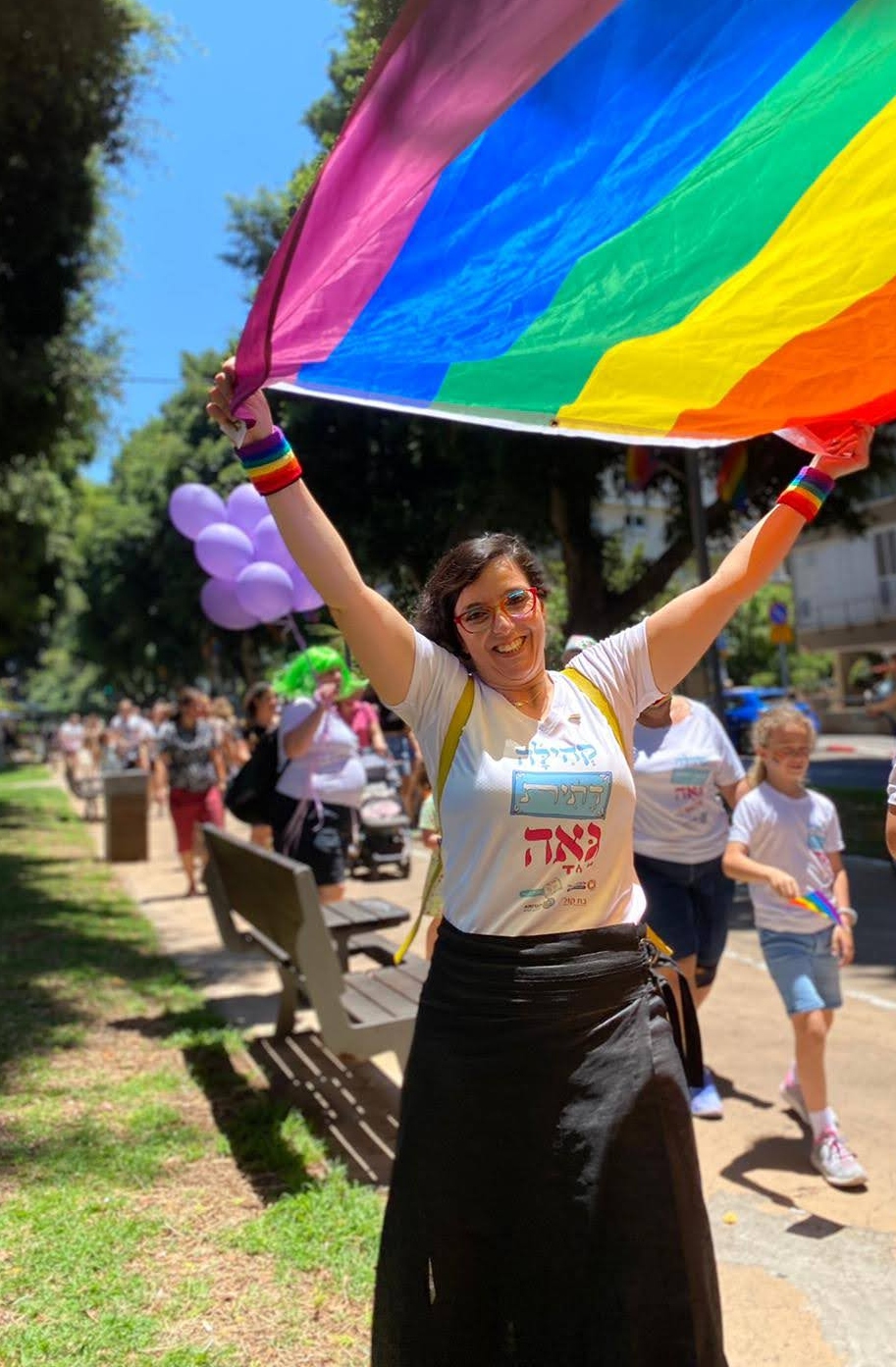 She is a former chairperson of the LGBTQ caucus of the Yesh Atid party, a former director at Hoshen, an educational program for LGBTQ acceptance, and a former Education Ministry teacher trainer with a master’s degree in history and archeology.

A founding member in 2005 of religious lesbian organization Bat Kol, Sorek is an Orthodox Jew who in 2009 inaugurated the Pride Minyan in Tel Aviv just in time for Yom Kippur. She juggles family life with work and her manifold contributions to LGBTQ society, including at the Ramat Gan LGBTQ Community Center.

For Sorek, “Equality is one of the most important values in my life, and in Judaism.

I want equality. If surrogacy exists in Israel, then I want it to be equal for all.”

In answer to how, as a religiously observant Jew, she views surrogacy for single men and same-sex male couples, Sorek quotes Genesis, 30:1-2. “Our mother Rachel tells her husband Jacob, ‘Give me children, or else I die.’ Even though Rachel was a woman, and biological men don’t carry children themselves,” she says, “the pain of gay men who want to have children and can’t, feels like a death to them.”

Except for the law against discrimination in the educational system, all the victories the LGBTQ community have achieved over the years in Israel are laws that have been amended via the High Court system. This includes the surrogacy victory.

In February 2020, a High Court ruling identified the previous wording of the surrogacy law as discriminatory and illegal, and considered that the right to try to become a parent is a process that should be available to everyone.

Since its implementation in 1993, the surrogacy law only applied to heterosexual couples until it was amended in 2018 to include single women, with no investigation into their sexuality.

The High Court ruled that the Knesset would have to change the law by March 2021, and then extended this until September 2021. Nevertheless, in July 2021 the government asked the court to rule on the issue, due to the inability of the present coalition government to reach a majority decision.

Thus, the High Court ruling on Israel’s surrogacy law now includes the right of same-sex male couples, as well as single men, to bear children via a gestational carrier.

Adopted by the Israeli Health Ministry on January 11, the language of this upgrade provides equal access to surrogate pregnancies “to any person in Israel.”

Although a majority in the Knesset and in the country would like to convert the High Court ruling into a new law that includes the term “LGBT,” two of the parties in the present coalition government, Yamina and the United Arab List, oppose changing the wording of the original law.

For a timeline of LGBTQ rights in Israel click here.

UNCOVER ISRAEL - Get the ISRAEL21c
Weekly Edition free by email
Sign Up Now!
Bring Israel's story to life.
Millions of people around the world rely on us to gain a deeper understanding of Israel. We are the trusted source for original content you won't find anywhere else.
You can make a difference. Donate today to support journalism that brings Israel’s story alive.
SUPPORT ISRAEL21c
Read more on:   Culture, gay pride, Surrogacy