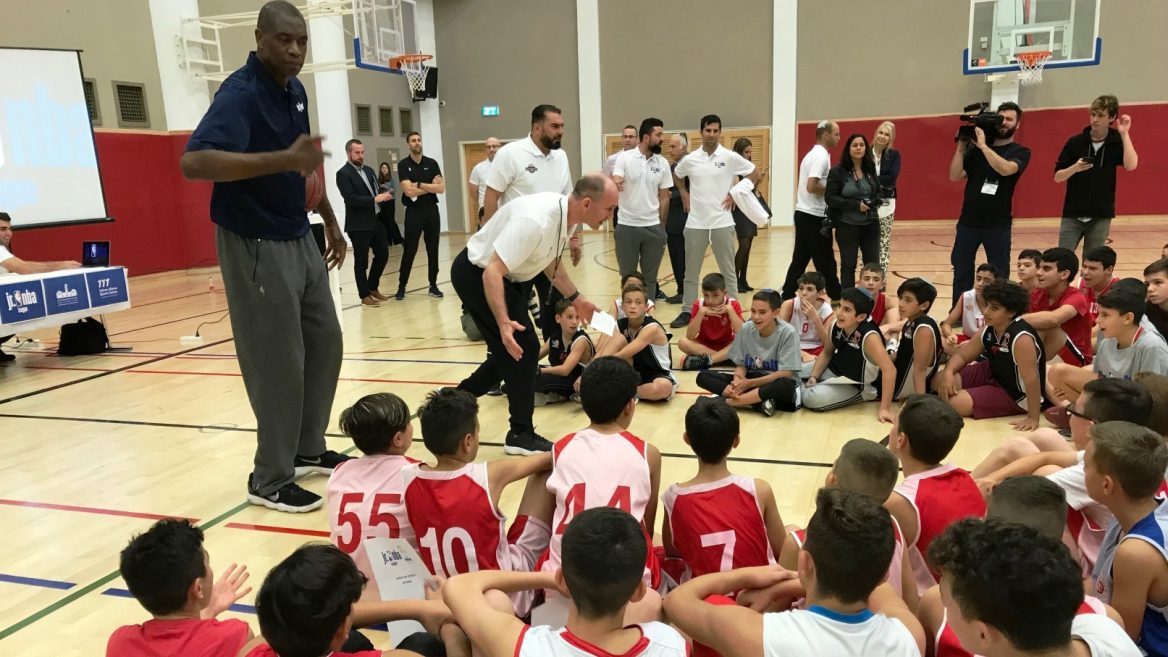 Fifty kids in red-and-white jerseys sat on the shiny basketball court looking way up high at US Basketball Hall of Famer Dikembe Mutombo giving them a pep talk in the new Sylvan Adams Sports Center of the Jerusalem International YMCA (JIY).

“We are bringing you here to build friendships with people you have never seen before and who may not speak your language,” Mutombo told the group, a fraction of the 450 Jewish, Muslim and Christian 11- to 13-year-olds expected to take part in the 30-team Jr. NBA Jerusalem International YMCA League.

The towering NBA Global Ambassador was in Israel for the first time, lending his eight-time All-Star power to the inauguration of the 100,000-square-foot (9,290-square-meter) sports complex and the first Jr. NBA league in Israel. 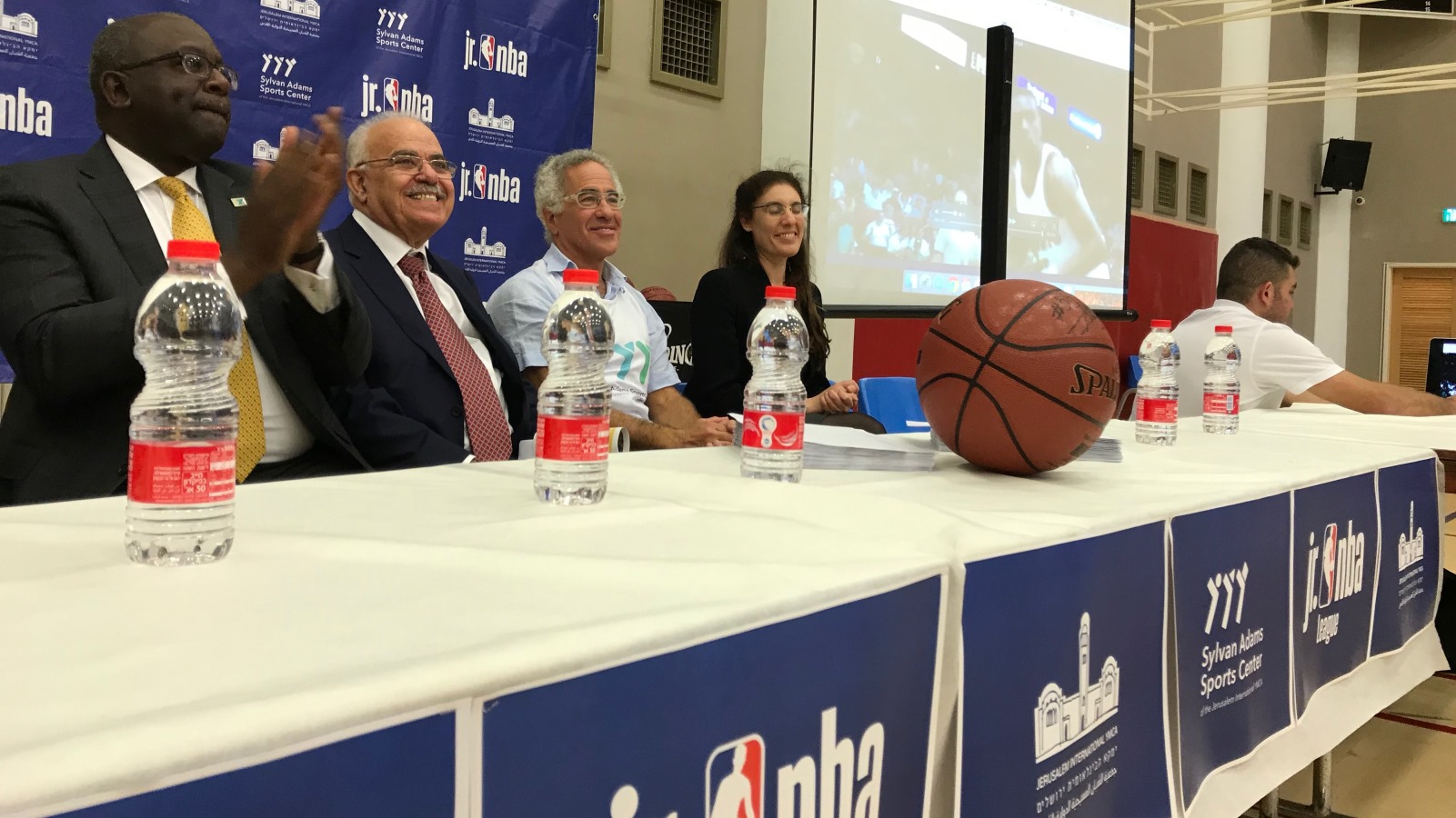 At the inauguration of the Jr. NBA Jerusalem International YMCA League, from left, YMCA of the USA President and CEO Kevin Washington; Chairman of the Board of the Jerusalem International YMCA Elias Khoury; Sylvan Adams, principal donor of the Sylvan Adams Sports Center of the JIY; and JIY board member Adina Shapiro. Photo by Abigail Klein Leichman

Eleven-year-old Emily Polansky of Jerusalem said the new center and league “will give us all a chance to one day be professional sportspeople or at least be healthy and strong. Maybe one day I will even play for the WNBA.”

Emily had the privilege of presenting Sylvan Adams at the November 27 inauguration ceremony of the multistory complex, said to be the largest of its kind in the Middle East with a half-Olympic-size pool, indoor basketball court, exercise studios and rooftop garden plaza. 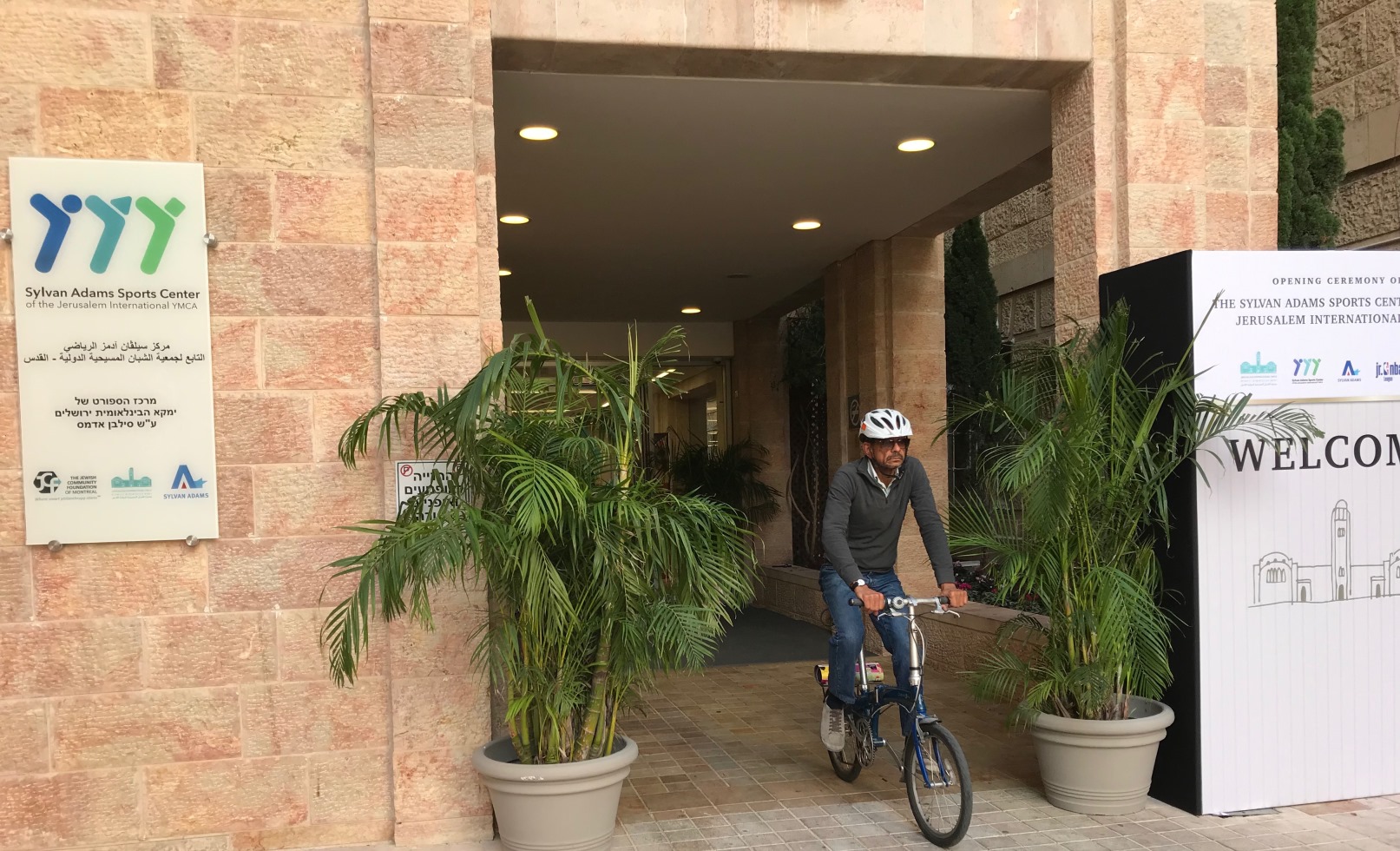 The Canadian philanthropist, living in Israel since 2006, supports a host of sporting initiatives in his adopted country.

As co-owner of the Israel Cycling Academy, Israel’s first national bike team, he brought the Giro d’Italia Grand Tour’s Big Start to Israel last May. He built a velodrome in Tel Aviv, the first in the Middle East; and established the Sylvan Adams Sports Institute at Tel Aviv University as a home for applied research to raise the level of Israeli sports achievement. On December 2, the new 110-kilometer Sylvan Adams Bicycle Trail will be inaugurated at a ceremony at its starting point in HaYarkon Park. 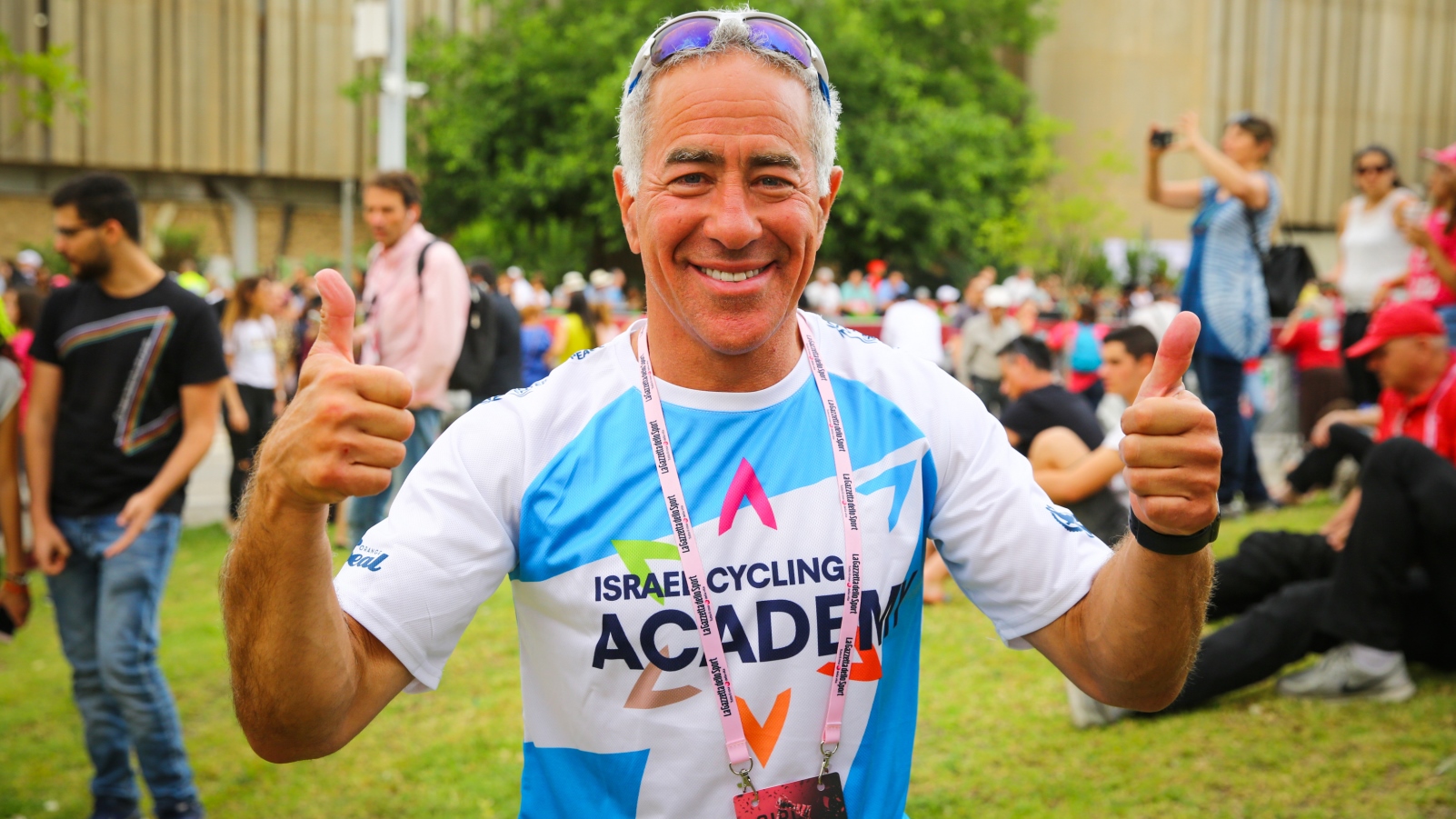 Inclusivity and diversity are high on Adams’ agenda. The Israel Cycling Academy’s 2018 roster is said to be the world’s most diverse, with 24 riders of four religions from 16 countries.

When Adams learned two years ago that the JIY — “the most important YMCA in the world in the most beautiful city in the world,” he said — had been trying to build a new sports complex for 30 years, he stepped in and made it happen.

The facility is known as a cultural oasis serving all segments of Jerusalem’s citizenry.

“The JIY includes everyone, no matter where they come from in the city, what their beliefs are, or how they dress and speak,” said Yulia Omari, interim CEO of JIY. “Like every family, differences exist, but our goal is to be together in spite of, and because of, our diversity.”

A screenshot of the JIY fitness class schedule in Hebrew, Arabic and English.

The JIY was founded in a bookstore near the Jaffa Gate in 1878, said Elias Khoury, chairman of the board of directors.

“It has always been the place where all Jerusalemites — Christian, Jew or Muslim, rich or poor — came to learn a language, to play sports, to hear a concert or enjoy a game of chess. We have been an island of calm and sanity for 140 years. Now, with the opening of the new sports center, we are taking our mission a big step forward into the future,” said Khoury. 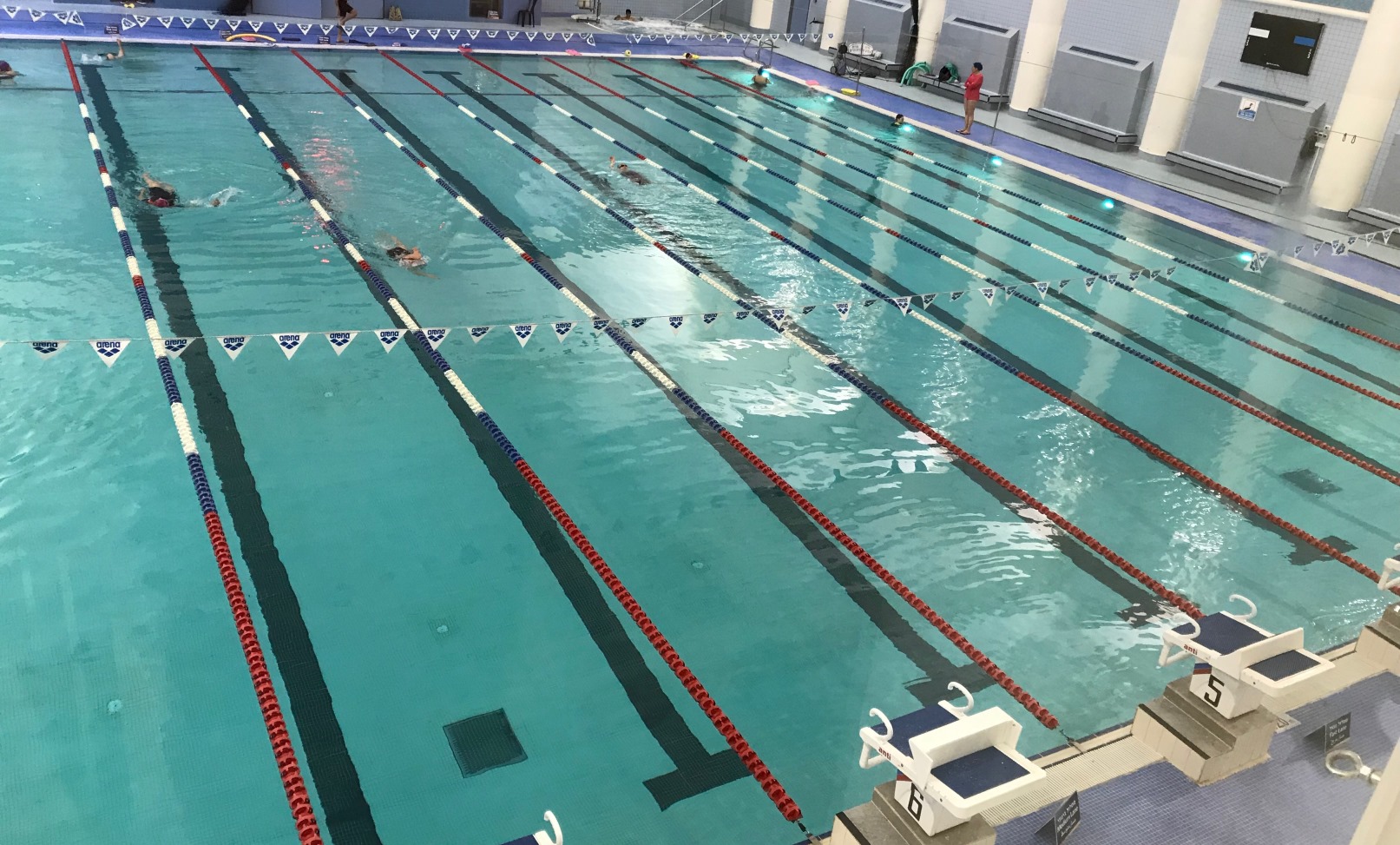 “Cultural, religious and national differences are not part of the game. Here, a Palestinian woman and an Israeli woman can be in the same sport class, working out side by side. In today’s reality in Jerusalem, this should not be taken for granted,” she said. 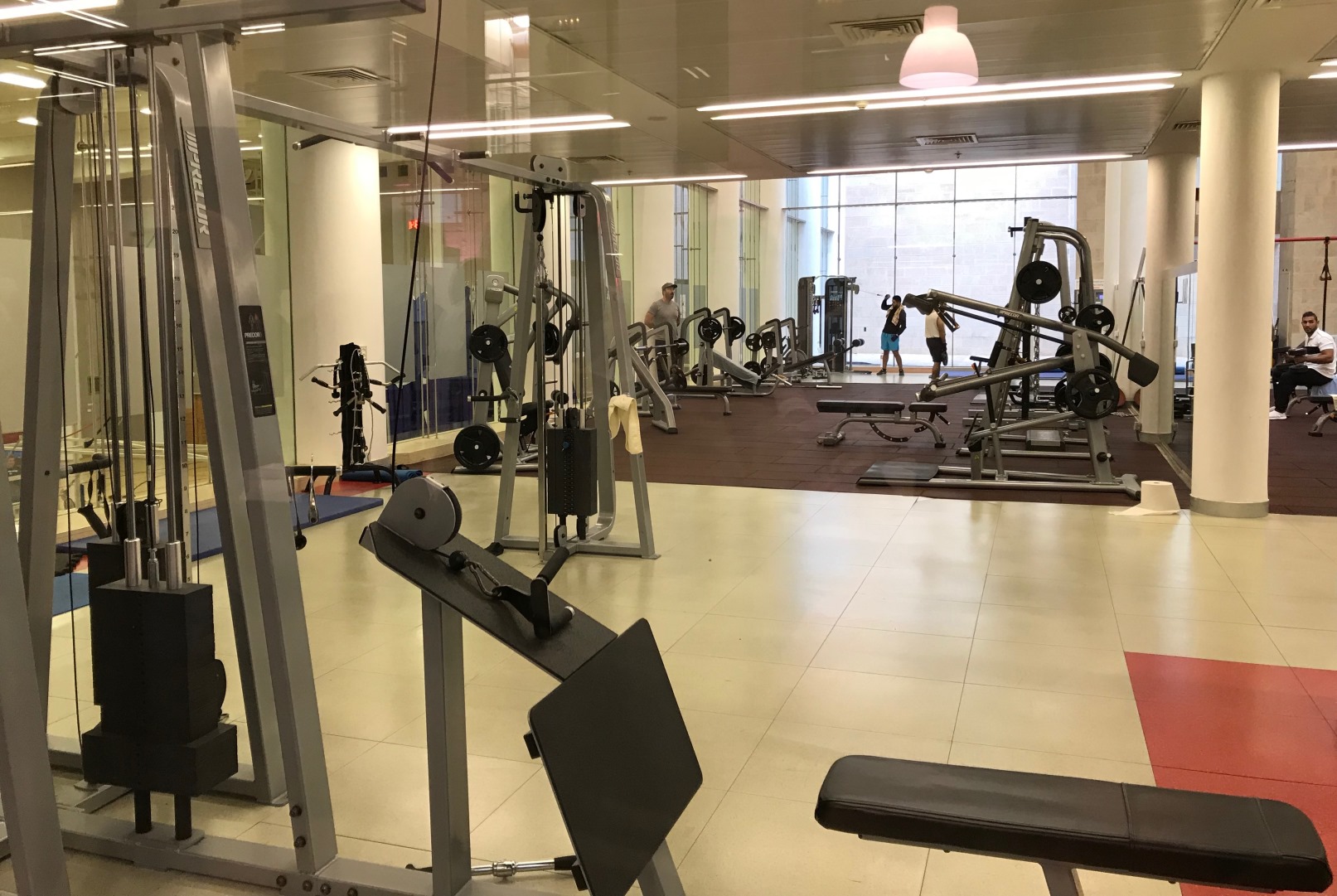 A workout room at the Sylvan Adams Sports Center of the Jerusalem International YMCA. Photo by Abigail Klein Leichman

In the audience were JIY members such as Karen Weiss from the Jerusalem suburb of Ma’aleh Adumim.

“I have been working out here three times a week for at least 28 years,” she tells ISRAEL21c. “What motivates me to schlep here from Ma’aleh Adumim is the professionalism and excellence of the instructors, and the supportive and tolerant atmosphere. I meet Arab, Christian and Muslim women, some who are here through the UN or the American government for a few years. We all share common interests and you never feel anyone is looking at you politically.”

The ceremony included a fitness demo by the center’s ethnically diverse professional staff.

“Whether we are kicking a ball or shooting a hoop, we can speak to each other through sports,” said Adams. The new sports complex, he said, could one day spawn “the next Michael Phelps, another Omri Caspi, or perhaps an Israeli Dikembe Mutombo.”

Mutombo urged the Jr. NBA players to practice diligently but not to the detriment of their schoolwork.

“It’s good to play the game but it’s also good to go to school because one day this beautiful basketball will stop bouncing,” he said, dropping the ball he held onto the new gym floor, “and the only insurance you have is your education.”