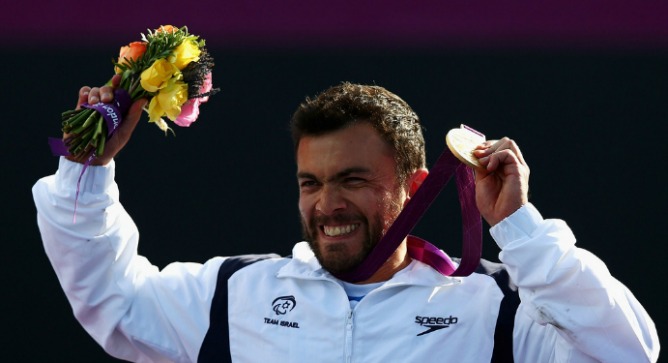 For the second time in his life, Noam Gershony grabbed the headlines of all Israeli media after beating David Wagner of the United States in straights in wheelchair tennis at the Paralympic Games on Saturday.

It took the 29-year-old Israeli with the winning smile less than an hour to wrap up a 6-3, 6-1 victory against the top seed in the quad singles final.

“Wow, this feeling is almost unbearable. I don’t know how to describe it. I haven’t realized yet that I have just won gold. It’s crazy,” said Gershony. “There was so much pressure to bring home the gold because I knew I could do it. I barely slept last night. I’m just happy to have made it.”

It was Gershony’s second Paralympic medal. He and doubles partner Shraga Weinberg won the bronze in the quad doubles event last week.

“I was very excited about your victory. The State of Israel embraces you for your great achievement. You symbolize the victory of the human spirit over the difficulties created by the reality in which we live. This is gold for you and the country,” Prime Minister Benjamin Netanyahu told Gershony in a phone call to London. 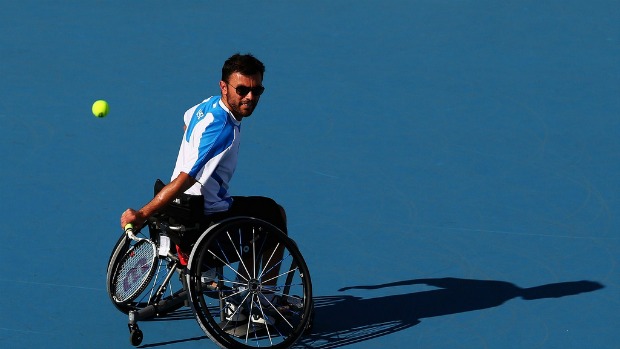 His achievement earned him the privilege of carrying the Israel flag in the closing ceremony in London.

Six years ago, Gershony topped the national news when he was critically injured during the second Lebanon War.

En route to the combat zone, Gershony was involved in an Apache helicopter crash that cost the life of his co-pilot. With open wounds, loss of blood and multiple fractures, Gershony’s prognosis was not optimistic.

Yet he proved that after years of therapy, operations and rehabilitation it was not only possible to reach the Paralympics but to win a gold medal as well.

“I salute you on behalf of the IDF on your exceptional determination and achievements,” Chief of Staff Benny Gantz told the tennis star by telephone.

“You proved that you are as good on court as you are in the sky, talented in the Apache and tennis,” said President Shimon Peres. “We are very proud of you. This is the best news we could have received this weekend.”

To his friends, family, commanders and fellow rehabilitation patients, Gershony has always been a hero.

“When you hear that knock on the door at 3 am, you know that something very bad has happened,” his father, Moshe, told The Jewish Chronicle about the moment an IDF officer arrived at the family’s home near Tel Aviv to break the news of the crash. “They took us to the hospital and said the situation with Noam was critical. We had to wait about a week before they told us he was almost out of danger.” 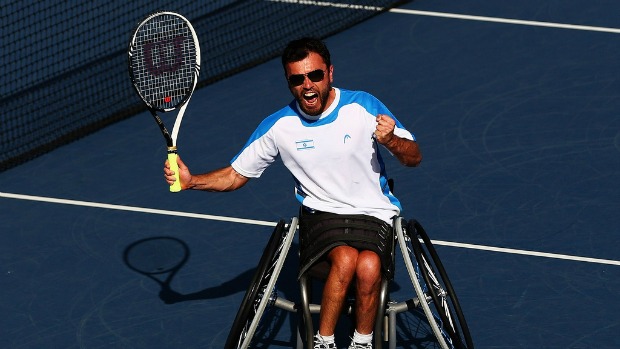 A paraplegic, Gershony only took up tennis a year ago.

Gershony himself told Ynet: “It was a miracle that I was saved. From the moment that I got my life back as a gift, I promised myself that I wouldn’t waste it.”

As part of his rehabilitation regimen, physiotherapists suggested he try wheelchair tennis to build up muscle tone in his damaged limbs. The shy gold medalist, who was left a quadriplegic after the accident, took to the sport just over one year ago and quickly shot up in the world rankings.

His mother, Pnina, told reporters that just seeing her son on the court was a victory. “We said that no matter what happened on the court, he had already won,” she said.

During the final match, Nimrod Bichler, Gershony’s coach, sat in the stands crying. “Five and a half years ago, Noam came to the Beit Halochem tennis courts for his first time. I can’t get that picture out of my head. A thin guy, unshaven, just like today,” he told Yediot Aharonot. “From the first practice I could tell he was super talented on the court. His athletic achievements are great but he’s also a special person and a true Israeli hero. I’m so proud to be his coach.”

Israel has nurtured other top tennis players on the international circuit. Shachar Peer, Andy Ram, Jonathan Erlich, and Dudi Sela are all well-known names. In the Paralympics, names like Gershony, Shraga Weinberg and Boaz Kramer stand out as well.

Gershony holds the highest ranking of the lot – second in the world in quad singles – yet he wasn’t a household name until today.

His friends from the Air Force knew his abilities – and were so confident he’d make the semi-finals and finals that they only bought tickets to the final stages of the London Games.

“I want to commend Noam on his amazing achievement,” Peer, the country’s best-known player, told Ynet. “To top the world’s best player at the Paralympic Games is an unbelievable success. You’ve inspired all of us.”

As the Paralympics officials readied the court for the medal ceremony, chants of “Noam, Noam!” grew louder and louder. Gershony wheeled himself to the top of the podium. “I’m on top of the world,” he said.

“I can’t put into words how it felt to hear ‘Hatikva’ and see the [Israeli] flag at the top of the pole,” Gershony, who wrapped himself in an Israeli flag, told reporters on the court. “I never thought I would have the chance to represent the country and certainly never believed that I would be able to bring it such honor.”