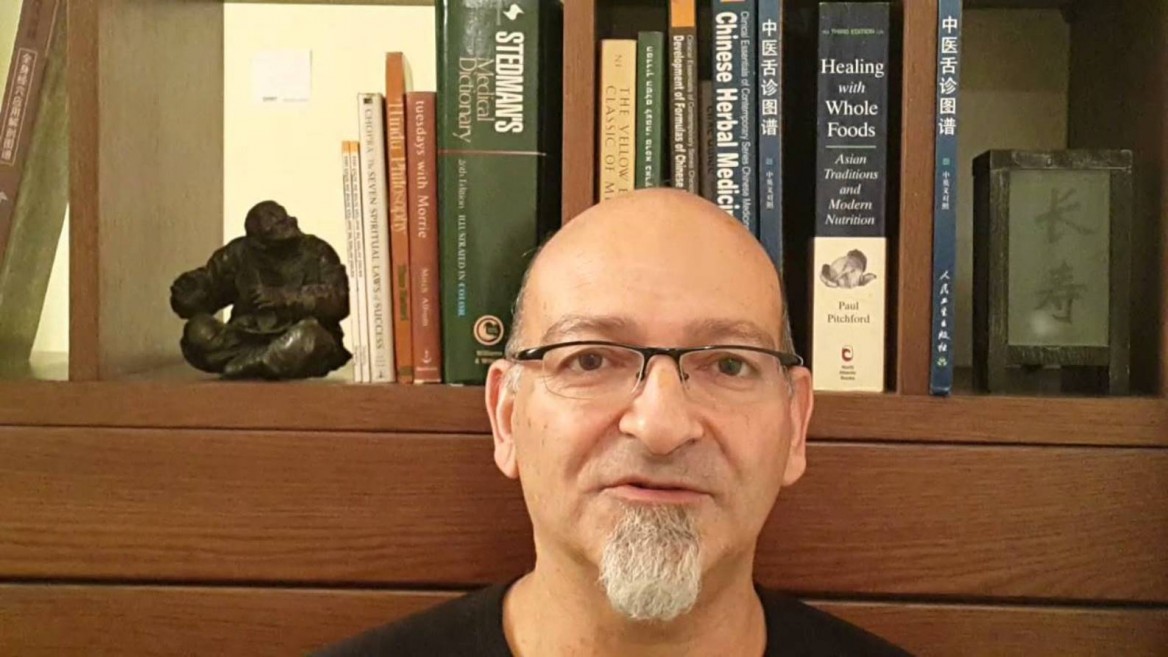 Roni Sapir, founder and dean of the Israeli Centre of Classic Chinese Medicine. Photo via YouTube

Haifa native Roni Sapir was studying geography and computers in college when a segment of the Israeli TV program Innovations and Inventions caught his interest. It showed a Chinese man having open-heart surgery with no anesthetic.

“The patient was completely awake and conversing calmly while the doctors dug in his chest,” he recalls. He was feeling no pain because of the Chinese needle technique called acupuncture.

“Wow, this is really amazing,” Sapir recalls thinking as he watched.

Today, the 50-year-old Sapir is founder and dean of the Israeli Centre of Classic Chinese Medicine (“East-West”) in Raanana.

He teaches practitioners in Israel and China, sees patients internationally and is director of the World Federation of Chinese Medicine Societies, a body that oversees 174 associations in about 80 countries. He is vice president of the new International Red Cross Hospital in Hunan as well.

Now one of the world’s foremost authorities on the ancient medical art, he had intended to be a marine photographer with a backup in computer science.

But two years after seeing that TV program, Sapir noticed a headline announcing the opening of a Chinese medicine school in Tel Aviv. When he called to inquire, he learned that it was started by two Israelis who had studied in California. The classes were to be given on Tuesdays – the one free day in Sapir’s schedule.

Over three years of Tuesday classes, he learned the basics of what is known as traditional Chinese medicine (TCM), whose practices include herbal medicine, acupuncture, massage therapy and dietary therapy.

Sapir was drawn to learn more about classical Chinese medicine (CCM), grounded in the original spiritual underpinnings of the practice — such as the forces of yin and yang and the five elements of earth, fire, wood, metal and water. CCM and its practitioners were banned from China after the 1949 Communist revolution, which is why Sapir discovered that the best school for CCM was in England.

“I didn’t know a word of English, but they took me on trial,” Sapir says in his now excellent English. He studied there from 1984 to 1992, earning an advanced degree and becoming a clinician and teacher at the school. Eventually, he was running five clinics.

And then, a little voice told him to go home. Taking it as a sign from God, Sapir packed enough things for a week and waited at his parents’ house in Haifa for the next “sign.” It came when he went to the TCM school in Tel Aviv to meet a friend for lunch. He ran into the director of the school, who asked him to open another Chinese medicine school in Israel. A month later, he was back to stay.

Sapir next became medical adviser to a complementary medicine spa at the northern tip of the Dead Sea. He started a class there as well, but when this area was given to the Palestinian Authority following the 1993 Oslo Accords, they had to leave. This group of students formed the nucleus of East-West, which Sapir established in 1999 in Tel Aviv.

In the intervening years, Sapir was spending a lot of time in Beijing, forming connections with the Chinese Health Ministry facilitated by the Chinese embassy in Israel. CCM was by then regaining favor in the land of its origin.

“They got me meetings with the directors of all Chinese medicine programs there, and we started working together to help me open the best school for classical Chinese medicine,” says Sapir.

The four-year East-West curriculum, which will also be given in English starting in the fall of 2011, provides 5,000 academic hours of instruction in areas such as herbal medicine, Tuina touch therapy, lifestyle and nutrition advice and exercise. Sapir takes fourth-year students for a month of training at a Beijing hospital. The idea is to support, not supplant, traditional medical approaches to everything from oncology to pediatrics to pain, he stresses.

No countries outside Asia regulate Chinese medicine – Sapir and others brought this to the attention of the Knesset in 1997, without any concrete results – so Sapir advises potential patients to go to clinics at schools or institutions, “where you know there is a group and academics behind it,”.

CCM practitioners treat the patient rather than the disease, taking into account factors such as the climate in which the patient lives and the time of day at which the patient arrives for treatment. Differences in the proportion of humidity and dryness, light and darkness are believed to affect how the body reacts.

Sapir’s wife, Keren, also a CCM practitioner, directs East-West since Sapir is often traveling. “I trust her completely to run the whole show,” he says. Two years ago, he took their two children, now 14 and 10, on a month-long tour of China.

In an effort to bring CCM to the attention of a larger population, the Sapirs recently moved East-West into the new Amal Basharon Center, which is run by the Amal Group healthcare network.

“This cooperation will make us more available and accessible to everyone who needs us, and we can work in all of its centers throughout Israel,” says Sapir.

He continues to lecture and teach in China – “Beijing is like my second home,” he says – and to see patients in England, Scandinavia and Switzerland. He helped produce the International Standard of Chinese-English Terminology of Chinese Medicine, published in 2009. Before then, “everyone translated the Chinese terms differently and this caused a lot of confusion. I couldn’t talk to a practitioner in New York because we spoke a different language.”

Not that languages are a hurdle for Sapir, whose leisure-time reading is mostly in Chinese thought, culture and philosophy. To keep in shape, he enjoys spinning and tennis.