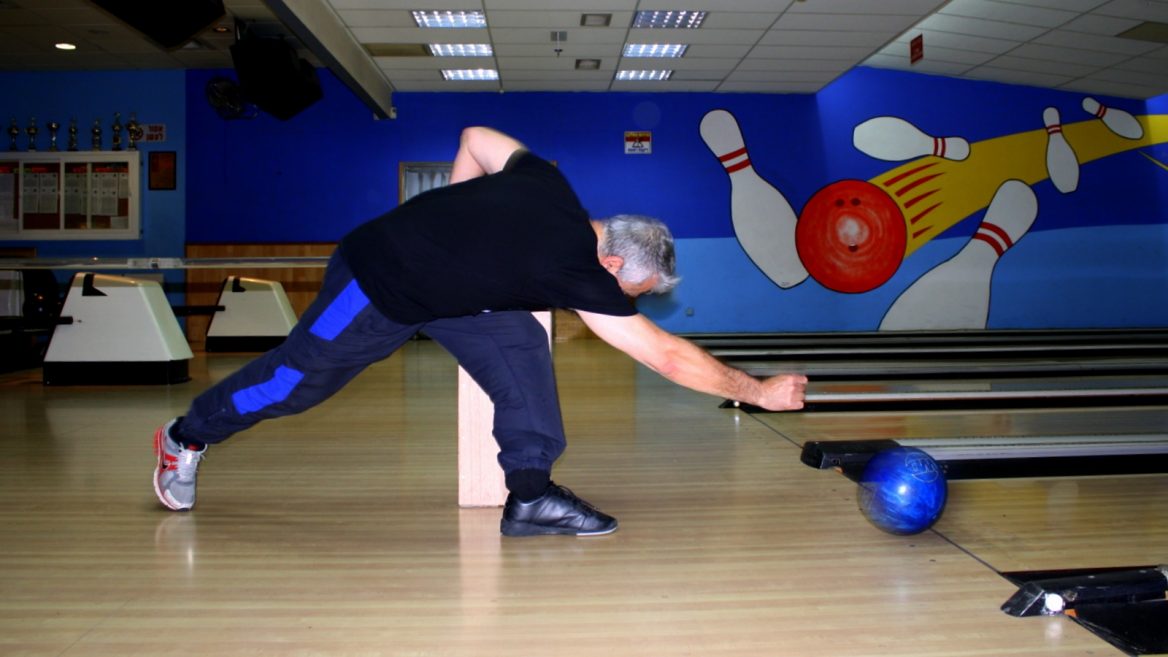 Shlomi Lazmy sends a ball down the lane. Photo by Leon Medalia

The sound of pins falling brings a smile to Shlomi Lazmy’s face. But he can only estimate how many he’s knocked down with his bowling ball, because Lazmy cannot see.

Until the explosion that blinded him during army reserve duty when he was a 28-year-old newlywed, Lazmy wasn’t much of a bowler. Now 55, he has long since adapted his love of sports to his lack of sight.

In 1992, he represented Israel at the Paralympics in goalball, a soccer-like sport for the blind where goalies and players are guided by the jingling of bells inside the ball.

At the urging of his 17-year-old son, about two years ago he began investigating bowling leagues for the blind via his text-to-voice computer. Though Israel has a lawn-bowling league for people with visual impairments, it doesn’t have one for 10-pin bowlers. Lazmy tried it anyway.

“I don’t have so many opportunities for sport, and this is very enjoyable,” Lazmy tells ISRAEL21c.

Today he plays every Monday and Wednesday at a nearby bowling alley in Holon, a suburb of Tel Aviv.

“At the beginning, he tried many things to help him bowl. Then he read about blind bowlers abroad using a special guide rail, and his brother made one for him,” says Lazmy’s wife, Idit. “It’s not very convenient to bring, because it’s heavy, but it’s built on wheels.”

The rail allows Lazmy to position himself correctly before sending the ball rolling. Obviously it does the trick: His average score per game is a very respectable 120 to 130.

“Idit used to bowl with me,” he says, “but now a friend picks me up and comes along. I can tell pretty well from the sound how many pins fall, but someone must watch and tell me what remains.”

After the first ball of every frame, his companion uses a code they devised to describe where to aim for the spare. If he says, for example, “Minus-1 Brooklyn” or “Minus-2 Hollywood,” Lazmy can visualize the position of the pins still standing. As he releases the ball, he can sense immediately if it’s heading in the right direction. 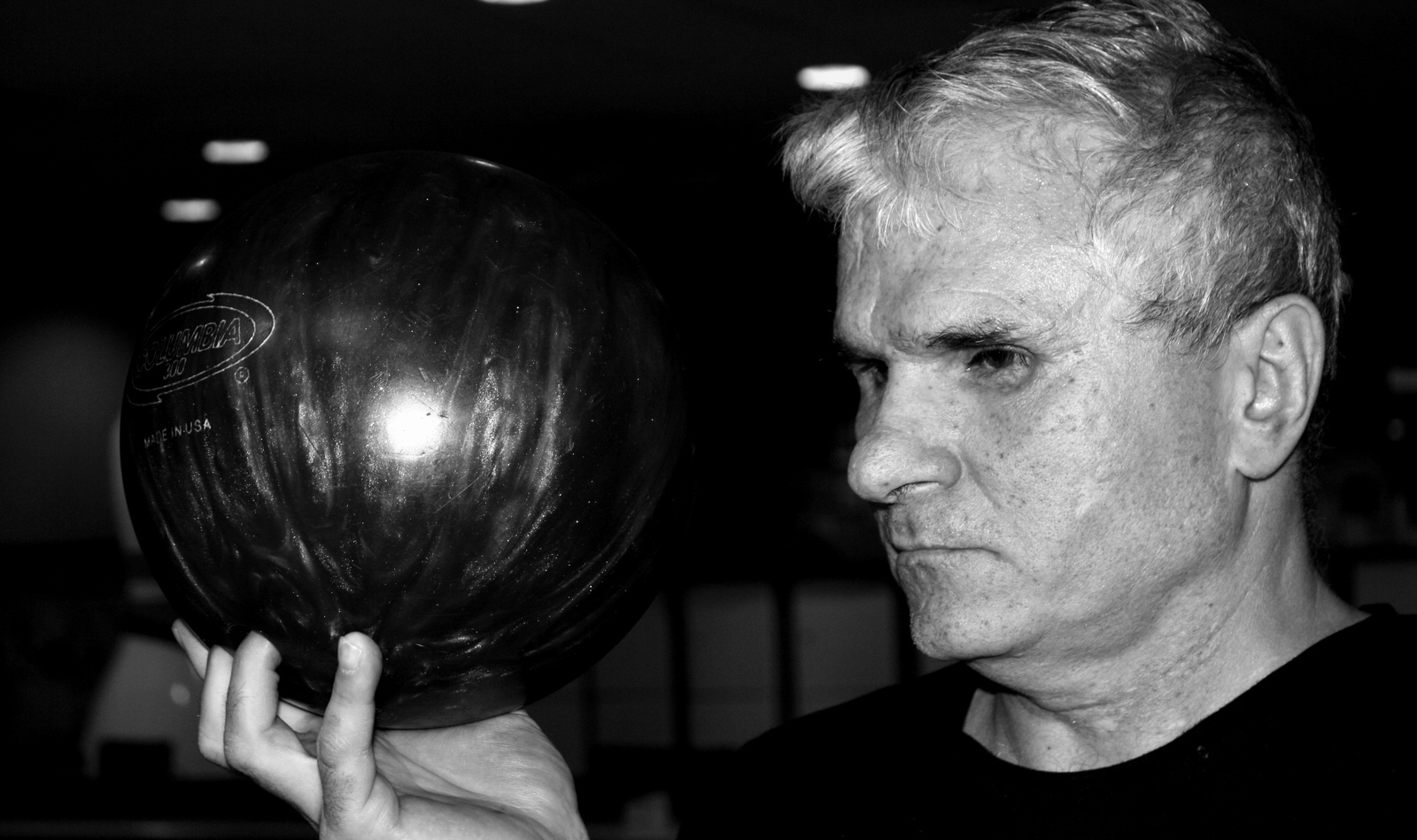 ‘He can do everything’

Lazmy is the oldest member of Mishkan HaYazamut, which employs about 40 people with various disabilities to interact with Israeli fourth- to 12th-graders. Director Kfir Naimark says that after engaging the kids in games of goalball or wheelchair basketball, for example, the members share their personal stories and dreams.

“Shlomi is so important to our organization,” says Naimark. “With great love and wisdom, he helps you understand the world of the blind. It is not an easy world.”

Israel has several sports facilities for the disabled. Lazmy trained in goalball at Beit Halochem in Tel Aviv, one of six such centers for wounded military veterans.

He sustained severe injuries to his eyes on June 1, 1986, while on reserve duty in the Golan Heights with the combat engineering corps. He and Idit had been married less than a year, and she was pregnant with the first of their three children.

“After that, I studied mathematics at Tel Aviv University,” says Lazmy, who decided from the start that he would not let his disability get in the way of learning and doing.

“He can do everything,” says Idit. “He has a high IQ, he is very talented and he’s good with his hands. He fixes electricity at home, he builds cupboards, he cooks. He’s also very good with the computer. He has a lot of patience. Whenever he gets a new device he sits with it all day to figure out how to use it, and then other blind people call him for support.”

“I have programs that render the Internet sites in sound,” Lazmy explains. He emails in Hebrew and English, though he is more comfortable speaking in Hebrew.

Bowling appealed to him, he says, because “this sport can be played just as sighted people play it, with the same ball and the same lane. I do other sports for the blind, but this needs the least adaptation. I need just the guide rail.”

He hopes to start a 10-pin bowling league for the blind.

“Although he plays goalball and even went to the Olympics, bowling is different because it’s his, and he’s really good at it,” says his wife.

UNCOVER ISRAEL - Get the ISRAEL21c
Weekly Edition free by email
Sign Up Now!
Bring Israel's story to life.
Millions of people around the world rely on us to gain a deeper understanding of Israel. We are the trusted source for original content you won't find anywhere else.
You can make a difference. Donate today to support journalism that brings Israel’s story alive.
SUPPORT ISRAEL21c
Read more on:   People, Art in Israel