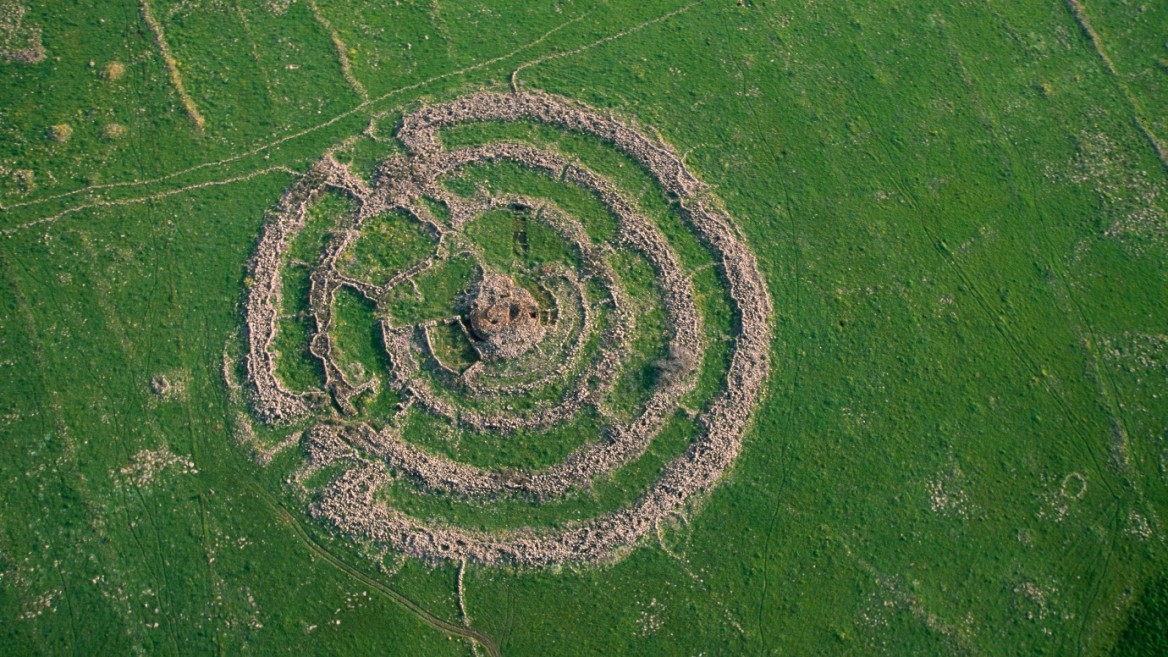 Israel is filled with hundreds of archaeological and historical sites. There are caves, ancient places of worship, amphitheaters dating back thousands of years, and fortresses waiting to be explored at just about every turn.

But there’s one off-the-beaten path archaeological site that many don’t know about, and even those who do haven’t visited.

It’s called Galgal Refa’im (“wheel of ghosts”) or Gilgal Refa’im (“circle of giants” referring to a biblical race of giants) in Hebrew, or Rujm el-Hiri in Arabic (“stone heap of the wild cats”). It is one of Israel’s most puzzling and mysterious places.

With massive rock walls jutting eight feet high into the sky, this Golan Heights structure is fondly called “Stonehenge of the Levant,” as according to many estimates, it is a contemporary of England’s Stonehenge.

The prehistoric Stonehenge monument in England, believed to be constructed between 3000 and 2000 BCE, is one of the world’s most famous sites. An average 1.3 million people visit this ring of standing stones every year. Other famous stone monuments popular with tourists include Chichen Itza in Mexico (1.4 million per year) and Machu Picchu in Peru (1.2 million).

Yet, Galgal Refa’im doesn’t draw even close to those numbers. Whether it’s because the magnificence of this approximately 5,000-year-old stone structure comprising some 42,000 tons of basalt stone laid out in huge concentric circles can only be seen properly from the air or whether it’s because of a lack of publicity, this obscure site attracts only a trickle of visitors most of the year.

A slighter bigger crowd – mostly astronomers and astrologists – comes on the days of winter solstice and summer solstice, when the sunrise lines up with cracks in the rocks.

But for the most part, this archaeological treasure — located between roads 808 and 98 in Israel’s Golan Heights about three kilometers south of Moshav Yonatan – is still waiting for its Indiana Jones moment.

Scientists and archaeologists agree that this enormous stone structure is one of the oldest and largest in the region. But that’s all they agree on.

“The excavation finished years ago. We have bits of information, but not the whole picture,” Uri Berger, an expert on megalithic tombs with the Israel Antiquities Authority, tells ISRAEL21c. “It’s a mystery.”

Some believe it was an ancient calendar due to the solstice lineup, or perhaps a monument used for astronomical observations and religious calculations.

Others think it was a burial site for important individuals because it has a 15-foot interment mound in the middle and a 20-foot-long burial chamber that visitors can crawl into. Another idea is that this structure was used to lay out the dead for the birds.

“Scientists come and are amazed by the site and think up their own theories,” says Berger.

Even the age of the structure has been debated.

When Galgal Refa’im was first excavated in the 1960s, it was dated to the Early Bronze Age II (3000–2700 BCE). But in 2010, Michael Freikman of the Hebrew University of Jerusalem said the mysterious site was more likely built in the Late Bronze Age (1550–1200 BCE) because it matches construction of the Chalcolithic period.

Berger tells ISRAEL21c that each of the archaeologists who studied this place “is certain about his findings. He’s sure he has the dates of the site. But others who have excavated, they have their own theories. There’s always another opinion or theory.”

Berger encourages people to visit, even though on the ground Galgal Refa’im seems little more than crumbling stone walls overgrown with weeds. From above, it is easier to see its bulls-eye or labyrinth shape. Some of the rock wall circles are complete, while others are missing chunks. The outermost wall is eight feet high and 520 feet in diameter.

The Golan Walking Trail passes Galgal Refa’im, which is only accessible by foot and open to visitors only on weekends and holidays because the area is used by the IDF for training exercises during the week.