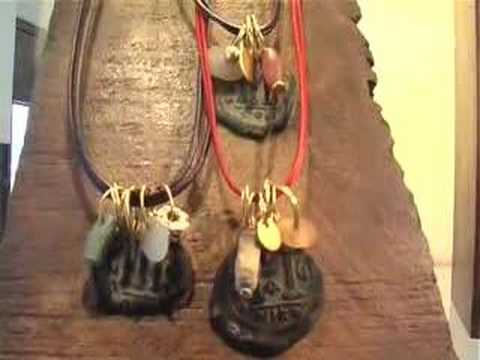 The raw unpolished gold of Agas and Tamar’s jewelry is attracting the attention of fashionistas everywhere – from stars like Julia Roberts and Demi Moore, to the world’s top fashion magazines. Now there’s a store in New York.

Julia Roberts wears the label. So does Debra Messing, Demi Moore, Cheryl Crow and the vampire slayer Sarah Michelle Geller. Sex and the City fashionistas have featured it on the show, and Donna Karan sells a small collection in her New York concept shop Urban Zen.

What is it about the designs of Israel’s Agas & Tamar (Pear and Date), handcrafted in Tel Aviv, that have generated the interest of American style icons and fashion magazines such as Vanity Fair, Elle, and Vogue?

Is it the raw, unpolished gold that looks like it emerged from Pharaoh’s tomb? Or the biblical inscriptions, written in the ancient language of Sumerian, offering the wearer blessings of luck, joy and eternal happiness?

It might be the “look” of old money, literally – as some of the pieces incorporate ancient coins and radiant beads – inspired by the stamps and trinkets of kings who once ruled the region.

Now, with a new shop that opened on Mott Street in New York’s trendy Soho district this past fall, Americans won’t need to travel all the way to the Holy Land to buy the jewelry favored by superstars.

ISRAEL21c talks with Nili Shachar, the manager of Agas & Tamar in Israel. Based at the store’s flagship location on Shabazi Street in Tel Aviv’s quaint quarter, Neve Zedek, Shachar says: “There is something very special in the design.

“It is a classic touch, yet very connected to the raw materials. We use brushed gold. And a lot of 24 karat gold – all matte finished – we don’t do shiny glittery.”

Founded by Einat Agassi and Tamar Harel-Klein, two Israelis who started designing together 10 years ago, today the company has grown to include a small staff of silversmiths who craft the handmade designs lovingly.

“They started 10 years ago with just the two of them,” says Shachar, “made a few pieces and slowly but safely they grew.”

A New York Times reviewer says that the slightly imperfect edges give the jewelry “an earthy feel” and tells visitors to the New York shop to look out for the Hebrew lettering script written by Rashi: “I put a ring on your nose, earrings in your ears, and a beautiful crown upon your head.”

The range of Eastern-inspired pieces fit for a biblical or modern-day queen range from $150 to $4,000 dollars, says Shachar – the silver collection is more affordable.

Visitors to the shop in New York can expect other Israeli imports as well. The shop features antique pieces, bags and purses. “People recognize the store as a place with good taste,” says Shachar, who notes that the jewelry is bought by everyone from young couples looking for wedding rings, as well as older, more established people.