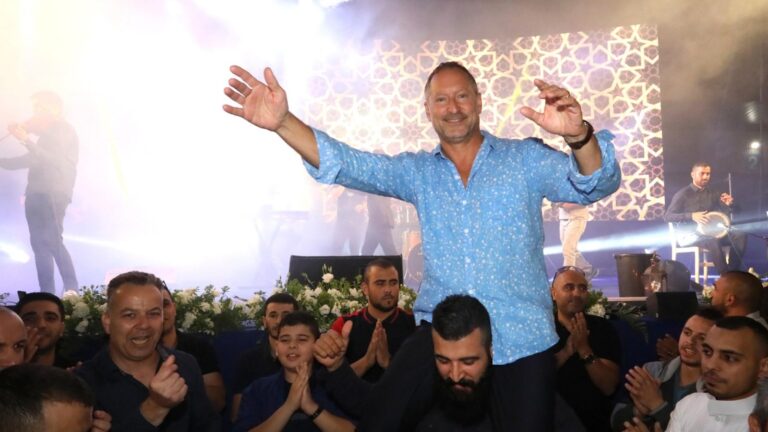 SodaStream CEO Daniel Birnbaum and employees celebrate at the company's Iftar dinner in the Negev on May 27, 2019. Photo by Sivan Faraj

Jews, Israeli Arabs and Palestinians walk into a carbonation-machine factory in the desert. This is not the beginning of a joke, but the daily reality at the SodaStream plant in the Negev.

And as the company’s Muslim employees are observing the month of Ramadan, marked by daily fasting, they all broke the fast together at a celebratory Iftar dinner this week.

The nearly 3,000 attendees, comprised of all of SodaStream’s employees and local and international guests, made the event the largest Iftar celebration in Israel and highlighted the company’s message of coexistence.

The theme for the night was peace, and guests enjoyed peace-themed foods and interfaith performances in Hebrew and Arabic. 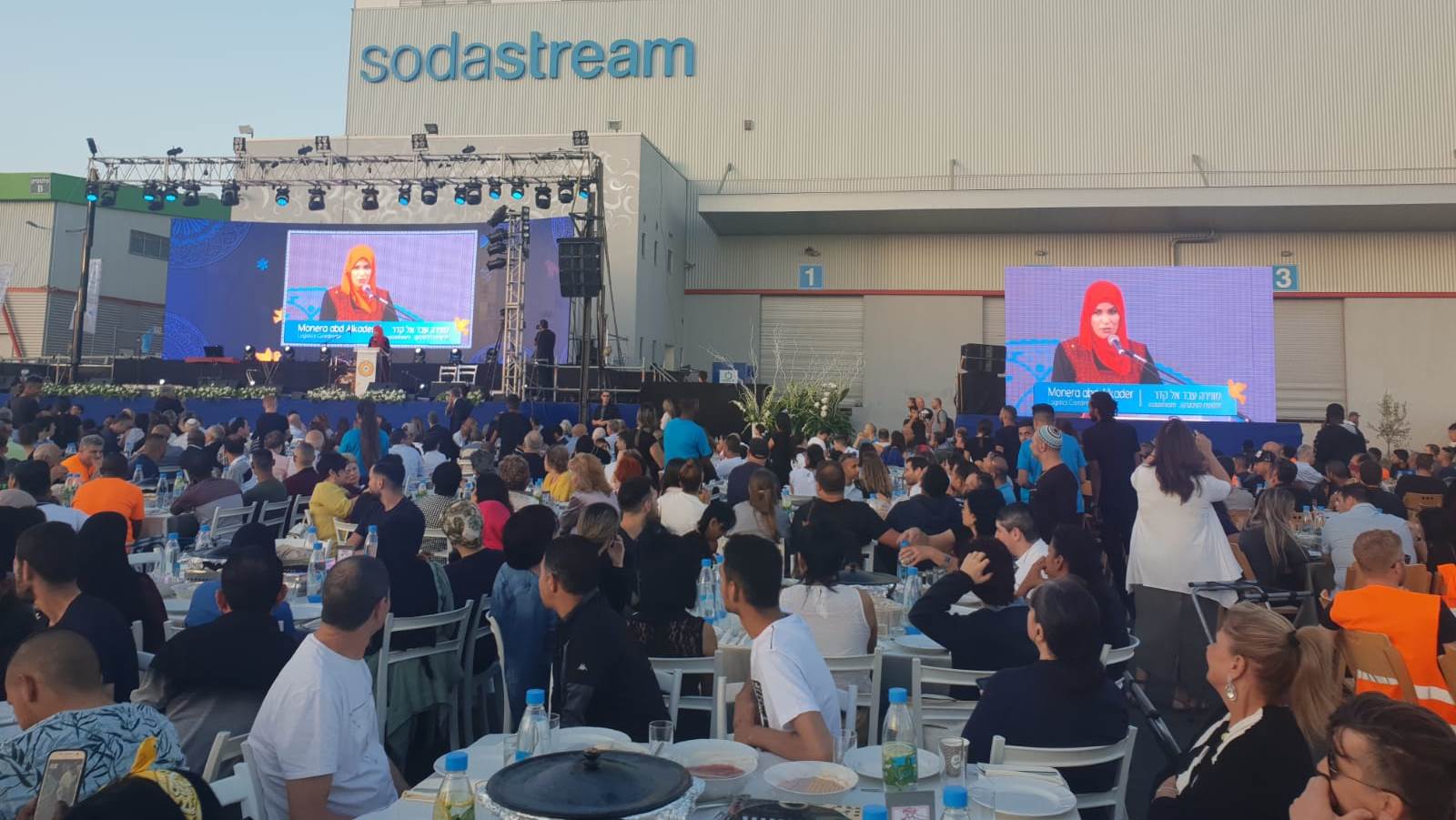 SodaStream workers and guests gather together to break the Ramadan fast at the company’s factory near Rahat. Photo by Sivan Faraj

“Do not wait for our leaders to bring coexistence between our peoples,” SodaStream CEO Daniel Birnbaum told the audience at the event.” We are the responsible adults who need to ensure coexistence and peace between us, not just at an Iftar dinner, but every day.

“The thousands of people who are eating here with us tonight are the light which defeats the darkness, both under missiles and during tense periods,” he added.

SodaStream, which was acquired by PepsiCo for $3.2 billion in 2018, makes home sparkling beverage machines sold at more than 80,000 retail stores across 46 countries.

Previously located in the West Bank, SodaStream’s factory employed 500 Palestinians alongside its Israeli workers. Upon moving near the Bedouin village of Rahat in Israel’s south, it retained 150 of its Palestinian employees, who now work alongside many members of the local Bedouin community and other Jewish employees.

Overall, the plant now employs 120 Palestinians, 500 Bedouin (including 200 women) and some 100 new immigrants. Workers of all backgrounds at the SodaStream factory in Israel. Photo by Sivan Faraj

US Ambassador to Israel David Friedman was also present at the Iftar dinner.

“I can’t think of a better place to celebrate an Iftar dinner than at SodaStream, where Muslims, Jews and Christians come to work every day in cooperation and friendship,” he noted. “They exemplify the peaceful coexistence that is God’s greatest blessing to all humankind.‎” 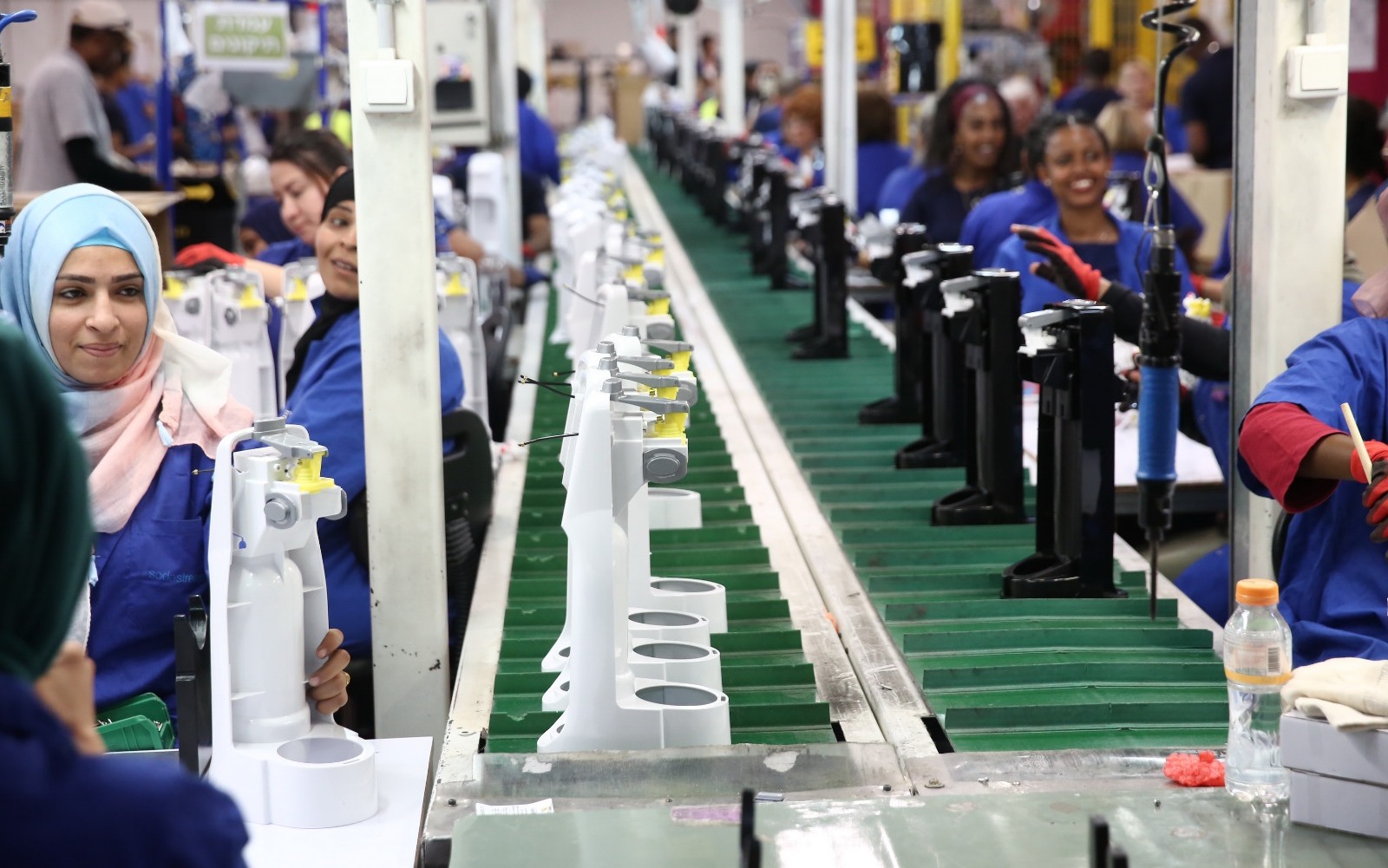 Female employees of diverse ethnicities work together at the SodaStream factory. Photo by Sivan Faraj

During the evening, SodaStream announced its plans to open a new assembly line in the Bedouin village of Kuseife, which suffers from high rates of unemployment and particularly women’s unemployment. Local women will be encouraged to join the assembly line, where they will work in an all-female environment and family-friendly shift times.