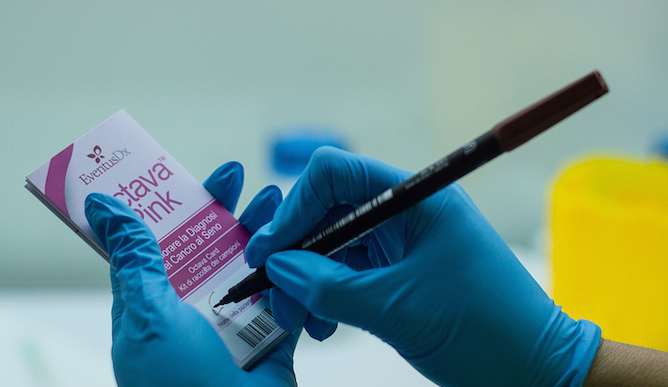 A groundbreaking test for breast cancer.

The Octava Pink test is now available in Israel and Italy, and is undergoing clinical trials to receive US Food and Drug Administration approval.

This is the first blood test ever that can reveal cancer, not merely markers that might indicate cancer or something else. Its innovation also lies in its examination of antibodies in the blood to pinpoint this specific cancer.

Molecular biologist Galit Yahalom — who heads the research team at the EventusDx offices and lab, located in Moshav Ora outside of Jerusalem – explains the breakthrough to ISRAEL21c.

“For the last decade, we have known that there is a connection between cancer and the immune system,” says Yahalom, a 43-year-old mother of two from Modi’in who has been working on this project since its inception.

“We know that it recognizes cancer as an external enemy that must be destroyed. It is possible that each of us has had instances of cancer we were unaware of, because our immune systems killed it when it was still very small. For whatever reason, the immune system of people with cancer is not functioning properly.” 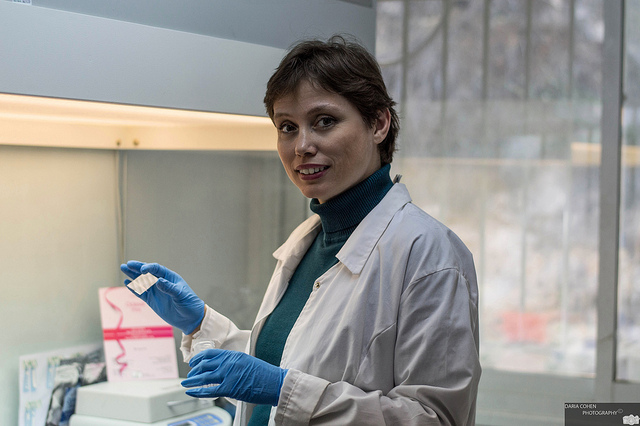 It was from this angle that Yahalom’s 15-strong team of biologists (and a computer expert) attempted to tackle the problem. After collecting data from hundreds of healthy women and as many diagnosed with breast cancer, Yahalom’s team looked for the proteins of the immune system responsible for detecting both. They also examined immune-system activity in women with ovarian cancer and men and women with intestinal cancer, to see the distinction from those with breast cancer.

Yahalom says that comparing the panels of elements characteristic of the women with breast cancer to those of healthy women created “pictures” of each group.

“Imagine that one is a picture of a flower and the other of a heart,” she says. “Yours might be a flower with four petals instead of five, and another woman’s might be a heart with a bulge, but you both fall into one of the two categories.”

These categories are arrived at through a mathematical algorithm developed by EventusDx, a private company funded by American investors. The precision of the algorithm is high, with only a five percent margin of error.

“And even this small amount might not actually constitute error,” says Yahalom, “but rather the possibility that someone’s immune system detected a cancer that is either no longer there — because antibodies destroyed it — or that has not erupted yet.”

Since the release of Octava Pink in Israel in September, Yahalom’s lab has performed 400 such blood tests. 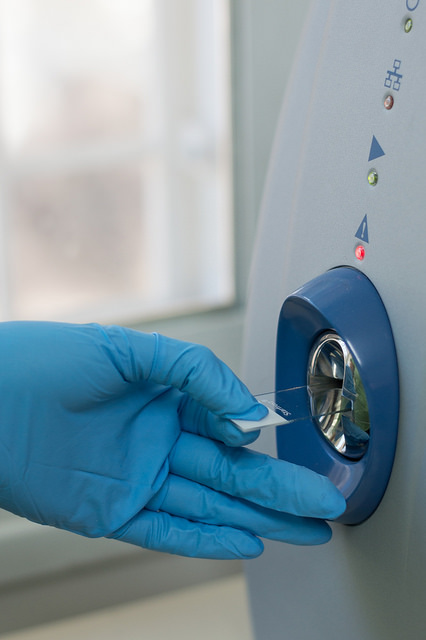 The test is already available in Israel and Italy.

Another innovation is the nanotechnology developed at EventusDx, which enables testing 96 blood samples simultaneously. This process takes no more than three hours, allowing a woman’s doctor to rule out or confirm breast cancer very quickly.

Speed, of course, is as important in breast-cancer detection as accuracy – not only for those whose results confirm their physicians’ suspicions or diagnoses of breast cancer, but also for those found to be cancer-free.

The Octava Pink test has had astounding results, correctly diagnosing 95% of the healthy women and 75% of those with breast cancer.

Though one in nine women will contract breast cancer at some point in their lifetime, only three in 1,000 have it at any given moment. This is why it is important for women to get regular checkups and to be provided this extra tool to assuage their fears.

This particular tool costs NIS 700 (about $200), not including the fee charged by the doctor who purchases the Octava kit and sends it to Yahalom’s lab.

The product’s name was chosen in reference to a metaphor used to describe the immune system: “A song sung in a low octave or a high one is still the same song,” says Yahalom. “But if one or more of the notes is off key, it is a different song. The same goes for the immune system. One person’s may work slowly and another person’s may work quickly; what we detect are the off notes.”

Her team is now working to improve the test, while exploring other cancers to target in the future.

UNCOVER ISRAEL - Get the ISRAEL21c
Weekly Edition free by email
Sign Up Now!
Bring Israel's story to life.
Millions of people around the world rely on us to gain a deeper understanding of Israel. We are the trusted source for original content you won't find anywhere else.
You can make a difference. Donate today to support journalism that brings Israel’s story alive.
SUPPORT ISRAEL21c
Read more on:   Health, Biotech, Living, Eventus Diagnostics, Breast Cancer