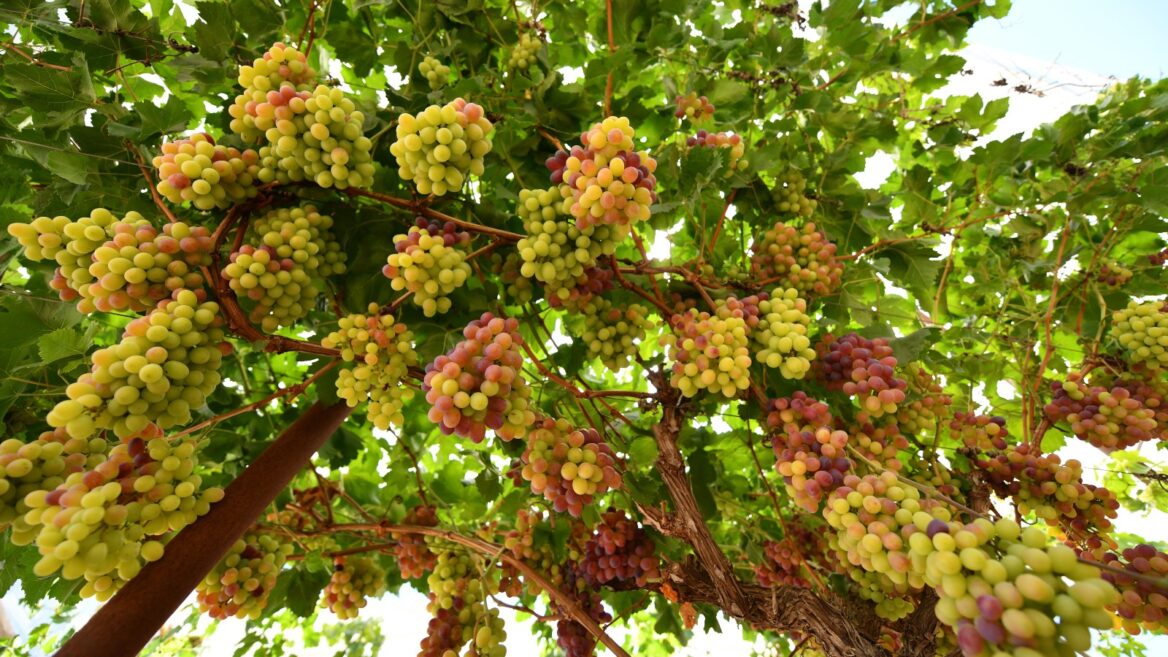 Grapes at the Tali Vineyard in Moshav Lachish, July 29, 2021. Photo by Mendy Hechtman/Flash90

For over 20 years, Israeli boutique wineries have skillfully been bringing back the ancient craft of winemaking to a land that has known how to grow and nurture grapevines since antiquity.

Fifty of at least 250 Israeli boutique wineries are conveniently nestled in the Judean foothills within easy driving distance of both Jerusalem and Tel Aviv. Here, the Ministry of Tourism has developed a wine route meandering through the rolling hills reminiscent of European wine country.

Indeed, said Talia Yashuv, an agricultural archeologist, the tradition of small backyard wine productions in the region can be traced back more than 5,000 years. 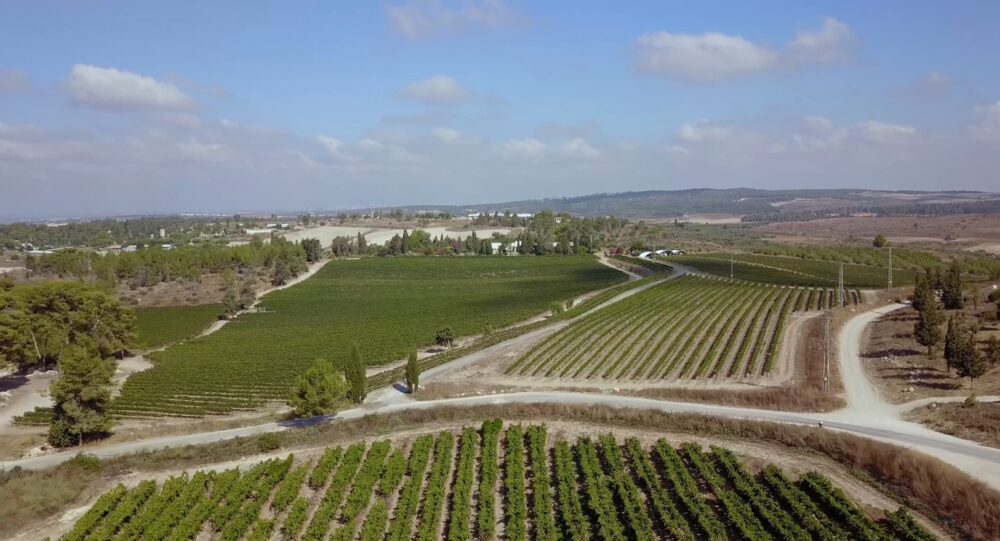 So it is no surprise that wineries such as the Bin Nun Winery in Moshav Bin Nun, Clos de Gat Winery in Kibbutz Harel and Kadma Winery in Moshav Uriel have found evidence of ancient wine production near their modern-day sites.

A large, sophisticated Byzantine-era wine factory in the modern Israeli town of Yavneh, revealed in October after two years of excavations, also attests to the importance of the region to winemaking in antiquity.

Although the local winemaking industry almost faded out under almost 400 years of rule by the Muslim Ottoman Empire, its revival has brought ingenuity and creativity to the local wine scene.

“The Judean Hills have the classic geography and great geology for wine growing, with its limestone terrain and microclimate hills going all the way up to Jerusalem,” said Yashuv, whose father, Shuki Yashuv, is among the recent pioneers of winemaking with his Agur Winery in the Elah Valley.

But though the history is there, the environment and climate of the region is being affected by worldwide climate change. Israel’s boutique winegrowers are learning to adapt to this change too.

“Vine growing is an optimistic endeavor and every period has had its challenges. Climate has always been an issue historically and so this is also the challenge of today,” noted Yashuv.

“If we are trying to think 20 years forward, and we are, it is an issue we have to take into consideration. But looking back, we can be optimistic. Looking at prehistoric and historic times, we can find something to learn in the years ahead.”

A recent study by researchers from Tel Aviv University, Tel-Hai College, and the University of Montpellier in France provided a first detailed reconstruction of the climate in the Land of Israel some 10,000 to 20,000 years ago.

The researchers believe this information can help in preserving crop variety and in meeting current and future climate challenges.

Some of the Judean Hills winemakers spoke to ISRAEL21c about these challenges.

He describes his observations as a “farmer’s gut feeling.”

“The summers are getting much hotter and the winters are getting shorter and shorter,” he said. Even if there is enough rain, he said, it does not get cold enough for the vines to “hibernate” over the winter in order to grow and produce sufficiently.

The changing weather patterns are damaging the vines’ inner biological clock, he said. “‘Worried’ is too strong of a word, but we are paying notice and are aware of what is happening.”

The cultivation of grapes involves a delicate dance between exposure to sun and to cold. Recent crop yield can be 30 percent less than in previous years, he said.

The use of drip irrigation allows them to monitor the amount of water they need for the plants, and they have had to irrigate more aggressively.

The limestone terrain in the Judean Hills and Elah Valley, and volcanic terrain in the Golan Heights and the Galilee in Israel’s North, allows grapevines in Israel’s “winery belt” to send their roots into earth for irrigation easily, he said. 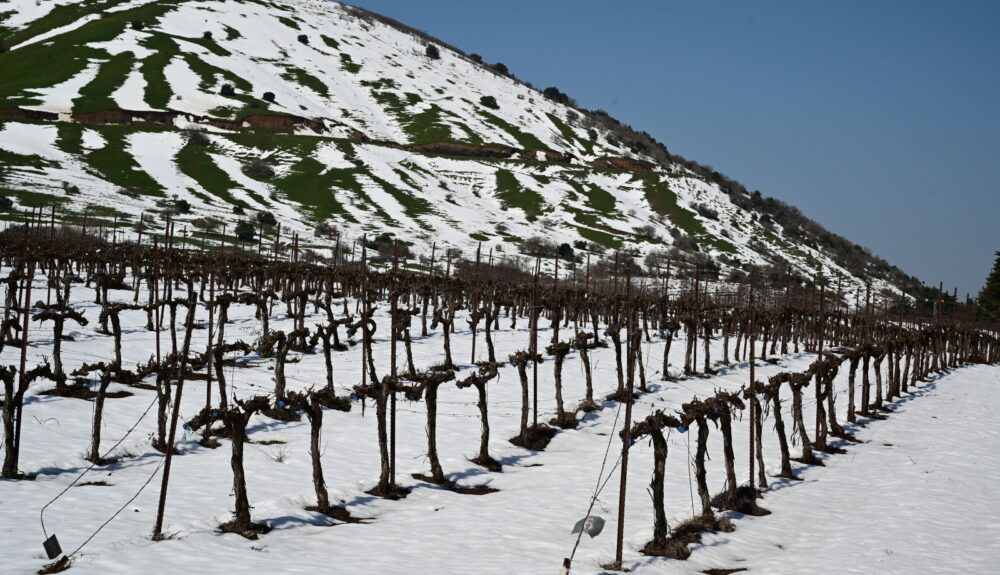 A snowy vineyard in the Golan Heights, February 23, 2021. Photo by Michael Giladi/Flash90

“In recent years we are harvesting earlier and earlier to avoid the heat. If we used to harvest at the end of July every year, we are now getting to harvest in early July because the more the grapes are exposed to the sun the more the sugar content goes up… which means they have a higher content of alcohol and we don’t want our wines to pass the 14% line,” White said.

Unlike crops that can be grown in controlled greenhouse conditions, grapevines are still cultivated much like they were in antiquity, not lending themselves to any of the high-tech solutions Israel is so well-known for, he said.

Changing the way they prune the vines, allowing more leaves to grow to protect the grapes from the sun’s rays, is one low-tech technique winegrowers are using to adapt to the changes, he said.

“We are quite lucky we have the microclimate of Jerusalem where we still have hot days but the temperature goes down at night so the vines can enjoy cool nights which helps them not be burned by the heat,” he said.

Every grape is precious

At Bravdo Winery at Moshav Karmei Yosef — whose winemakers, professors Ben Ami Bravdo and Oded Shoseyov, are two of Israel’s most senior vine and wine experts — the harvests have also been moving up over the past 10 years. 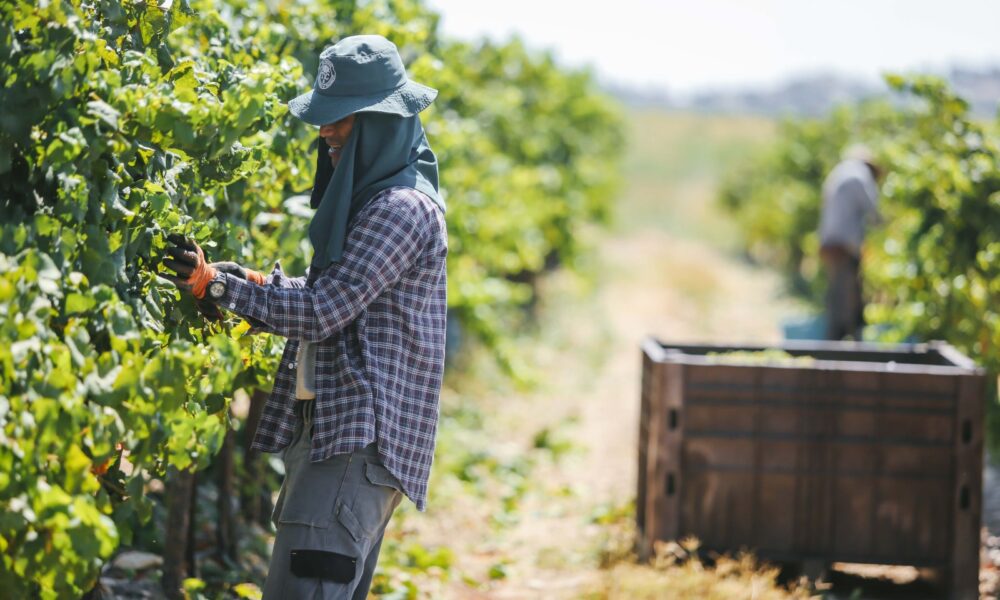 Winemakers from Europe have come to Bravdo to learn methods and techniques for protecting their vineyards from the increasing sun exposure, noted Hadar Bravdo, CMO and brand manager of the winery, and daughter of Ben Ami Bravdo.

“Here in Israel we have a lot of experience with a lot of sun and no rain,” she said.

The winery uses a sophisticated method of measuring the amount of humidity in a vine leaf to determine when it needs to be irrigated, she said.

The 2021 harvest was very difficult, said Zory Arkin, CEO and winemaker of Bravdo Winery, and the mild November weather was not a positive harbinger for things to come.

Though the crop was only 60% of its normal yield, the quality was nevertheless excellent, he emphasized, but the reduction is a concern for boutique winemakers for whom every grape is precious. 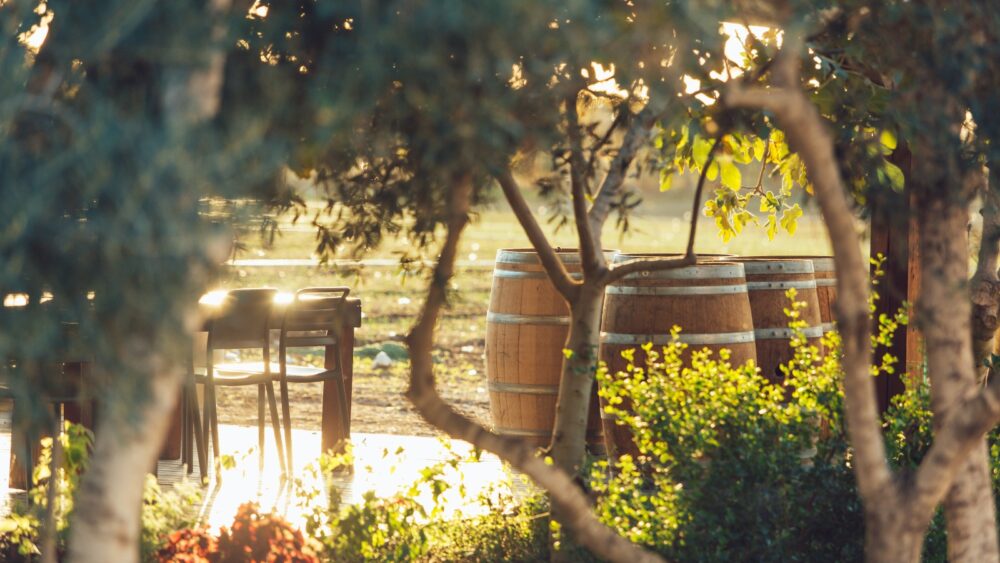 On the terrace at Bravdo Winery in Karmei Yosef. Photo by Chen Reuven

“The most effective way to combat this is to find right varieties of grapes that are more tolerant to warm winters and to really delay pruning as much possible,” said Arkin.

For example, he said, Shiraz grapes are less sensitive than Cabernet Sauvignon. “It is a worldwide problem; everything is changing. There are a lot of studies looking into this problem.”

From their 2018 vintage, Bravdo started collecting data from about 45 vineyards in their area, in collaboration with four more wineries.

They hope this joint effort will hasten their ability to make the ideal match between vine and terroir—a French term used to indicate soil type, slopes, precipitation, drainage and day-to-night temperature range in grape cultivation—in the Judean Hills. 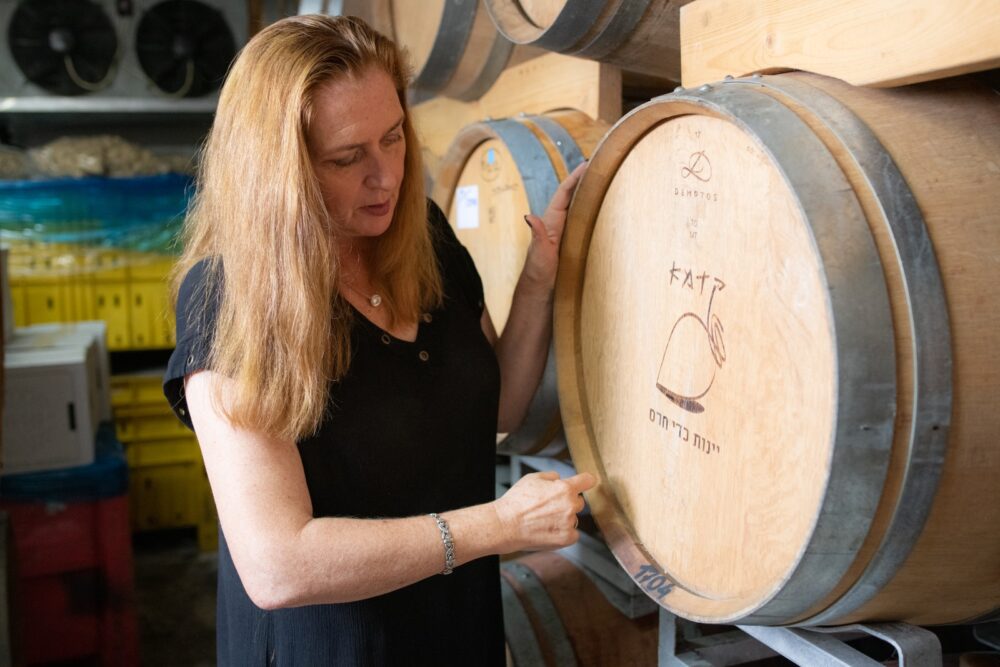 With an eye toward sustainability from its inception, the winery incorporates environmentally conscious methods such as solar panels to produce its own electricity, wall insulation to reduce the amount of electricity needed for cooling, double insulation for the cooling room, and a green wall on the south side to protect the building from direct sunlight.

“Cooling is the biggest problem for winemaking. It is very hot here so we have to cool the environment for a lot of the year; we have to use air conditioning but we try to reduce the amount of electricity we use,” she said. “We want to minimize any of our damaging impact on the environment as much as possible.”

“The main thing is to try to water as little as possible for the vine roots to go as deep as possible to get the maximum flavor and aromas that come naturally from the vineyard,” he said. “These past five to six years have been very dry.”

Standing on a rock formation near the small first and second Temple-era winepresses and mikveh he found when he began clearing away the rambles at the back of the plot of land he bought on the moshav in 2012, Yaniv noted that in biblical times wine was also used for religious purposes.

The location of a mikveh next to a winepress is a clear indication that this was a Jewish winemaking site, he said.

“Holy wine went to the Jewish Temple in Jerusalem and before people worked in the vineyards they had to immerse themselves in the ritual bath. It was not easy to dig a mikveh and nobody would have done that unless they had to,” he said.

Then he added with the optimism of a winegrower: “Winemaking was here in the past, it is here now, and it will be here in the future.”

UNCOVER ISRAEL - Get the ISRAEL21c
Weekly Edition free by email
Sign Up Now!
Bring Israel's story to life.
Millions of people around the world rely on us to gain a deeper understanding of Israel. We are the trusted source for original content you won't find anywhere else.
You can make a difference. Donate today to support journalism that brings Israel’s story alive.
SUPPORT ISRAEL21c
Read more on:   Culture, Environment, sustainability, Israeli wine, wineries, Climate Crisis, Oded Shoseyov