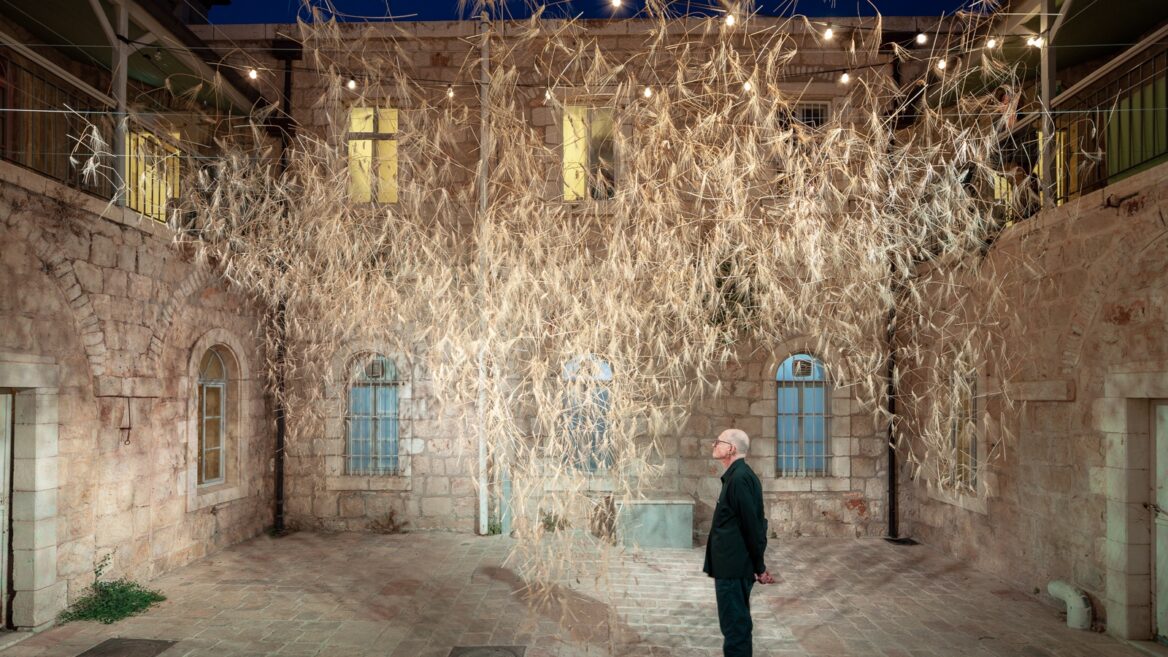 The “Goren” installation at Hansen House during JerusalemDesignWeek 2018. Photo by Ido Adan

Who would have thought an exhibit about wheat could be so emotional?

Visitors to the show at Japan’s Spiral Arts Center, held in cooperation with the Israeli Embassy of Japan, were mesmerized by the cloud of chaff – designed from actual wheat and 2,500 meters of brass wire — appearing to float up from the “threshing floor” (goren in Hebrew). 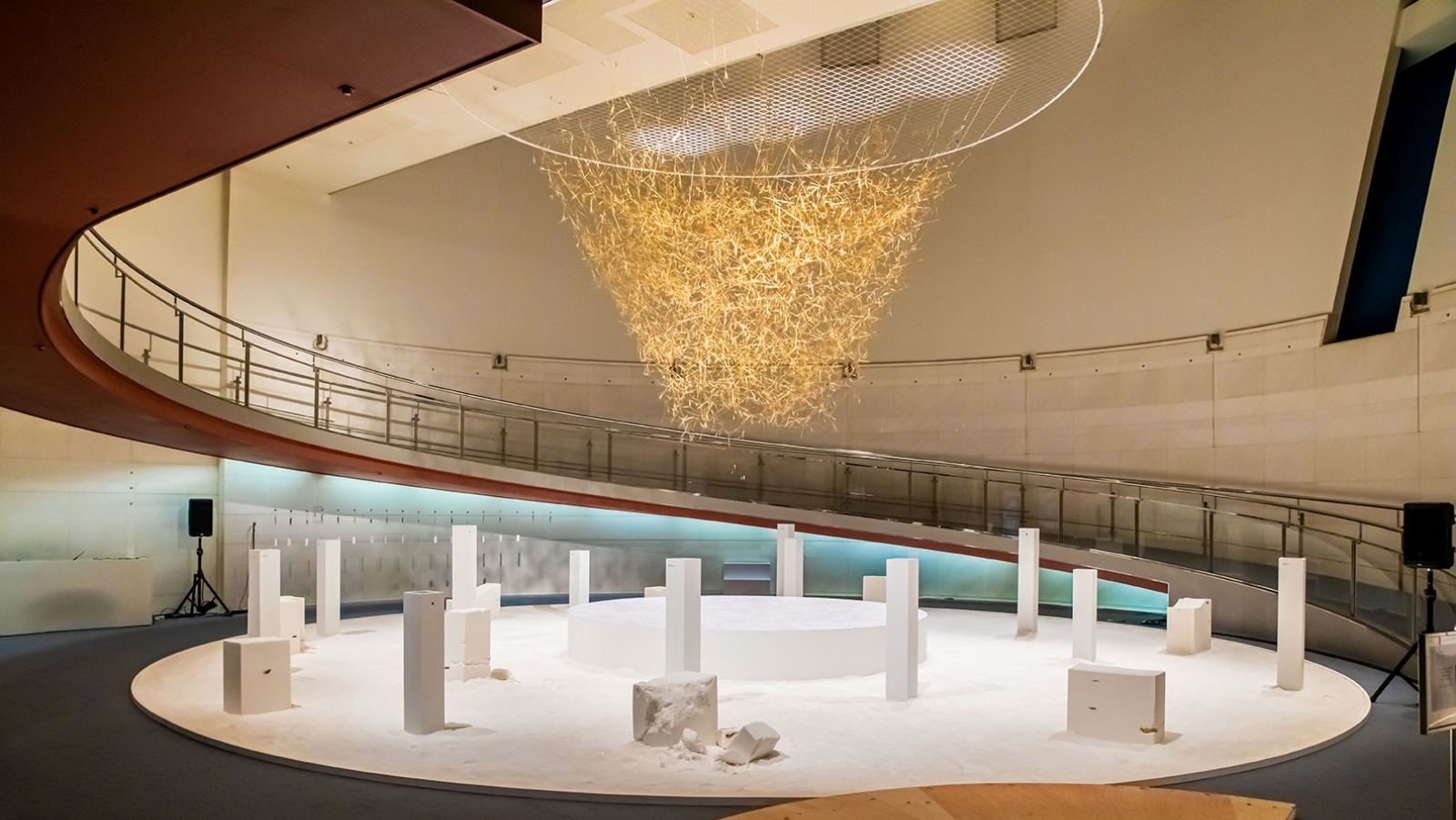 The ethereal chandelier of wheat was the brainchild of New York-based Israeli architect Nati Tunkelrot and Israeli designer Guy Mishaly, graduates of the Bezalel Academy of Art and Design in Jerusalem.

“The Middle East, for the last 12,000 years, has been home to thousands of genetically diverse varieties of wheat,” Tunkelrot explains. 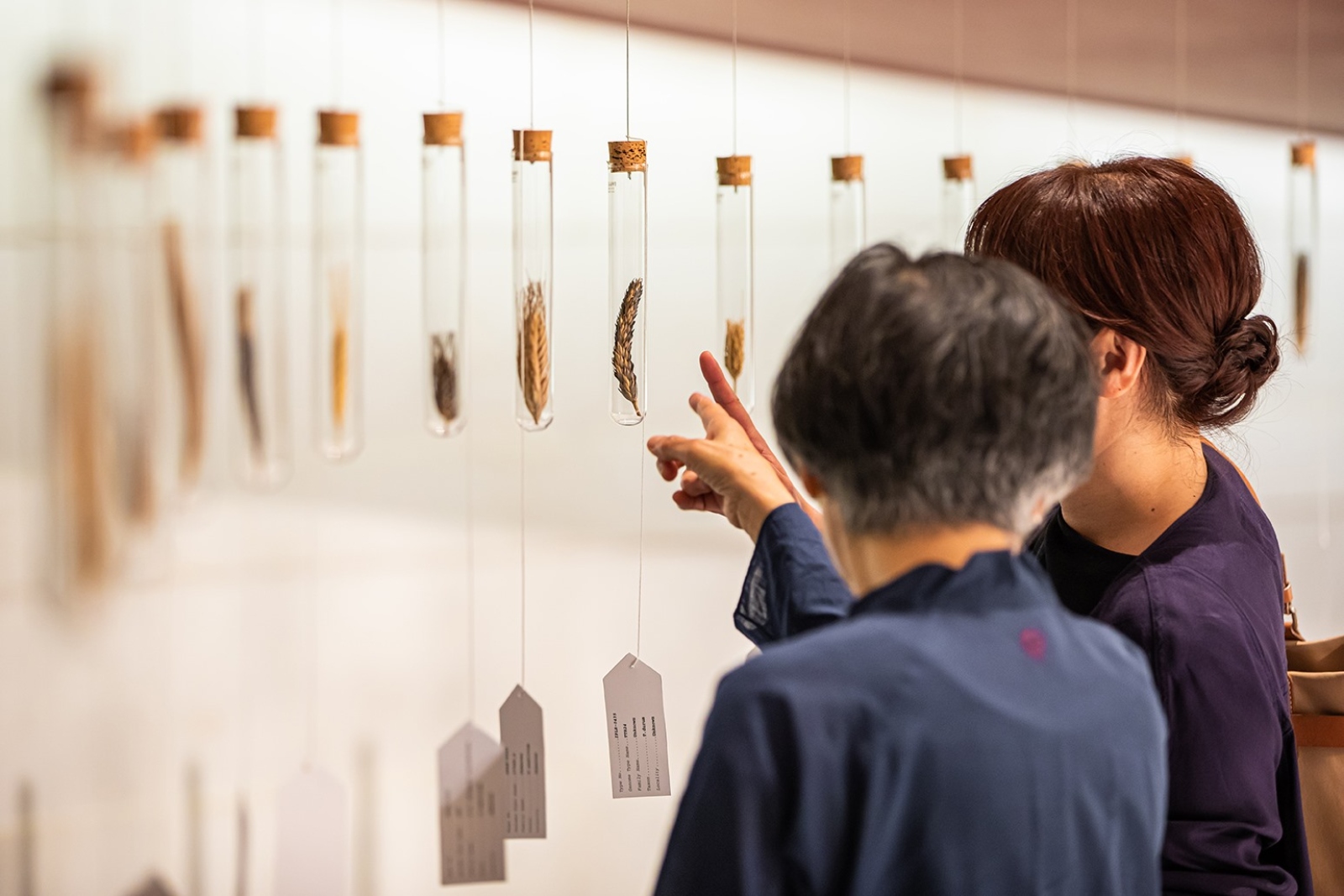 “Sadly, over the last hundred years this important building block of humanity’s history has been driven to the brink of extinction — being replaced by a handful of high-yielding and uniform strains. We wanted to give voice to this topic and spark a dialogue.”

Telling the story of the scientists

“Goren” originally was created for Jerusalem Design Week in 2018, which explored the role of design in conservation.

“All wheat started in the Middle East region, between Egypt and Turkey,” Mishaly explains.

“The wheat genome is six times more complicated than the human genome. But all this biodiversity doesn’t exist anymore. In the 1950s, a new wheat was developed by a US scientist, that was easier to grow with higher yield, and the other species went extinct.” 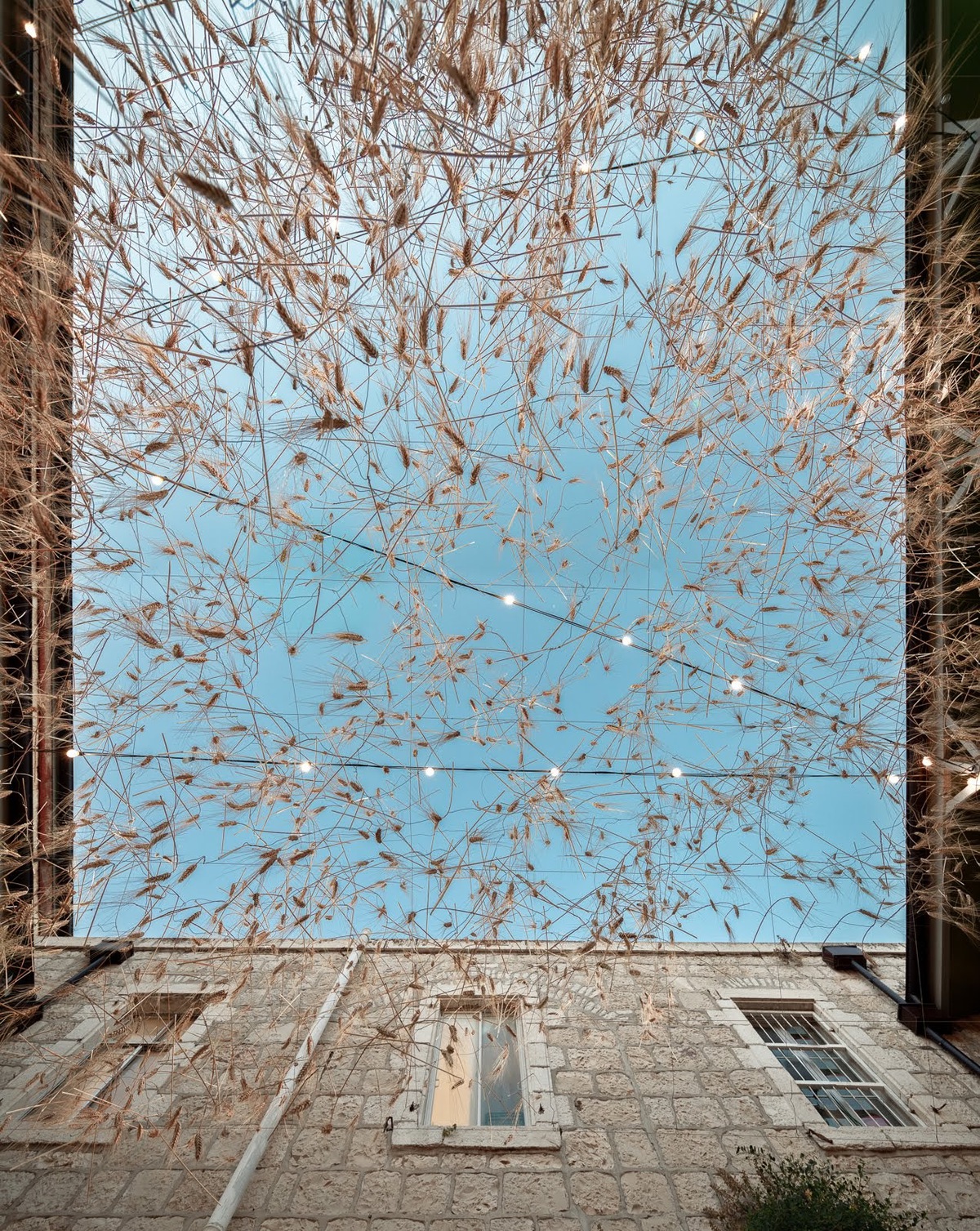 “Goren” in the courtyard of Hansen House, Jerusalem. Photo by Ido Adan

Through their research, the two artists discovered that the Weizmann Institute of Science and the Volcani Center-Agricultural Research Organization are working to gather, examine and conserve wheat strains indigenous to the Israeli region.

“The Weizmann Institute and the Israel Plant Gene Bank [at the Volcani Center] have collected seeds of 890 species out of about 4,000 that once existed. They are growing them to find new and better types of wheat, researching and analyzing the valuable genome they hold inside,” Tunkelrot tells ISRAEL21c.

“We were amazed by the tremendous scientific research that has been done for so many years, and decided to create a visual outcome to that story and reveal it to the public.” 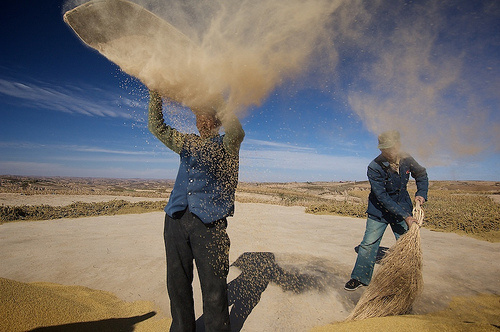 Chaff rises in a cloud when wheat is threshed. Photo: courtesy

Cereal crops including wheat contain edible grain kernels covered by an inedible hull (chaff). When the chaff is separated from the grain on the threshing floor, the chaff rises.

“Our vision was to let the visitor walk inside that experience,” says Tunkelrot. “We wanted to ‘capture’ the wheat chaff floating in the air, uniting ancient wheat varieties with new types so you can see the differences.”

The installation changes its form to fit the architectural space. In the courtyard of Jerusalem’s Hansen House Center of Design, Media and Technology, the wheat chandelier nearly touched the ground.

“People were standing in it, walking through it, and sitting in it,” Mishaly says. “When the wind picked up, the whole exhibit shifted form and even the birds came to visit throughout the day.” 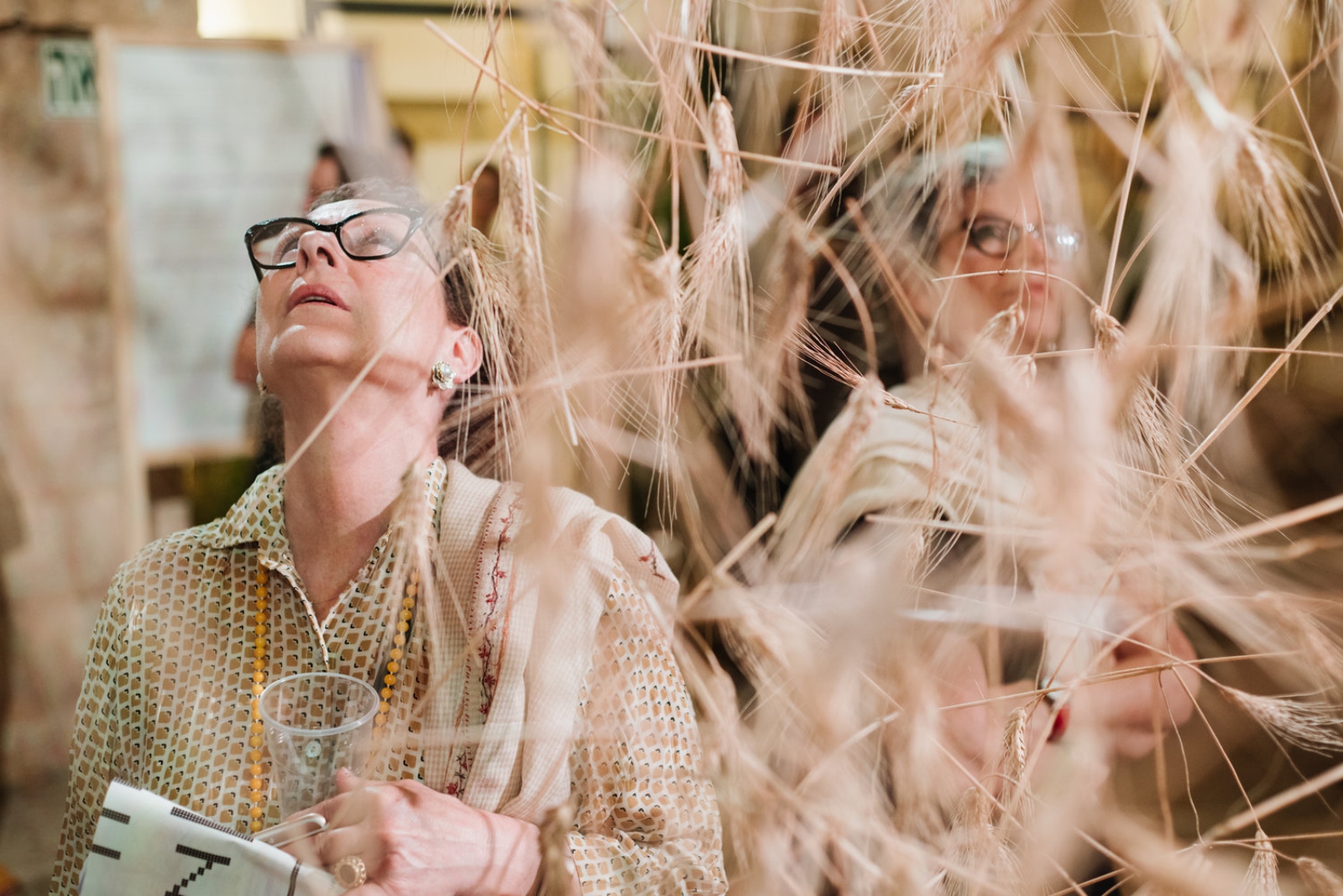 Visitors walking through the “wheat” at Hansen House, Jerusalem. Photo by Dor Kedmi

In Tokyo, the installation was indoors in a round gallery. Tunkelrot says its form seemed to change as you went up the ramp inside the Spiral Arts Center. 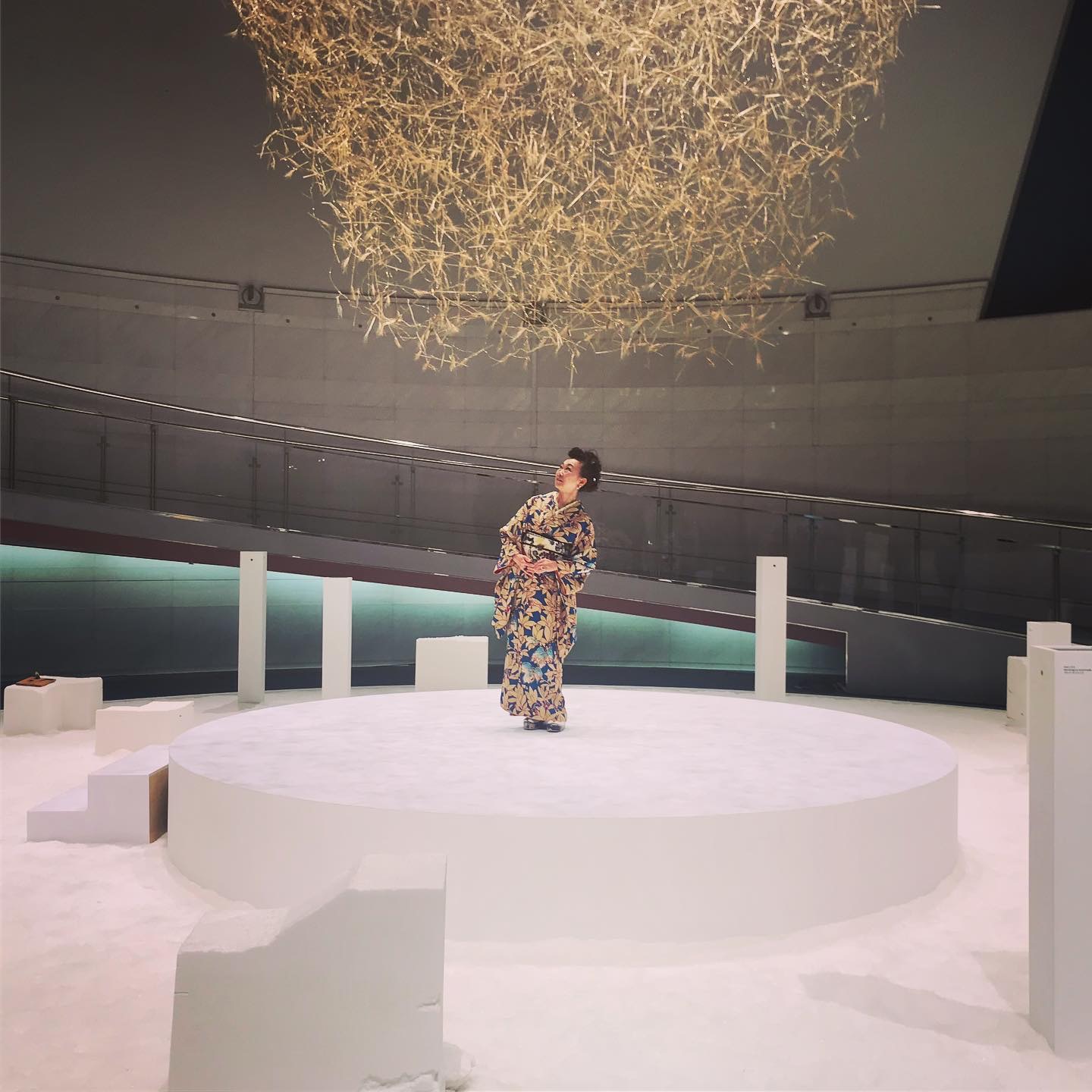 “Goren” on display at DesignArt Tokyo 2019. Photo by Tal Erez

“The whole piece sparkled like a talisman of golden jewelry.”

Some viewers chose to lie down on a podium at the base of the spiral to get a different perspective of the installation.

“Guests asked a lot of questions about wheat, an issue that had never crossed their mind. They were intrigued by the investment Israeli scientists are making in trying to preserve the most important agricultural crop for the Western world, and they were genuinely curious about what they could do to assist these efforts,” says Tunkelrot.

Even before leaving Tokyo, Mishaly and Tunkelrot had a few offers for their next exhibition location.

“It is precisely due to these interactions with visitors to ‘Goren’ that provide us with great motivation to continue presenting ‘Goren’ in many diverse metropolises around the world, so that we might spread the story of wheat and the loss of biodiversity.”