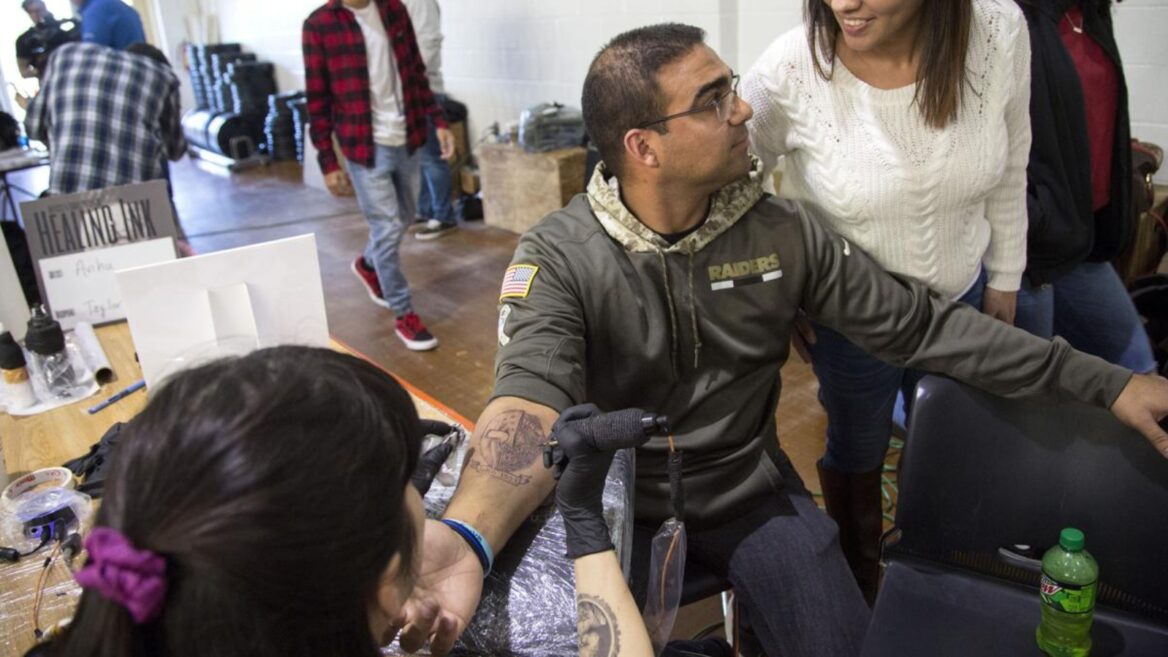 Virginia Beach Police Officer Matthew Nieves got the call over his radio last May 31 about an active shooter inside Building 2 of the Municipal Center.

He ran to assist in clearing the building and then comforted and escorted victims’ families to rooms where they awaited news about their loved ones. Twelve people were killed and four injured that day.

“I’ve since been to some mental-health training that made me realize that I was affected mentally more than I thought I was,” says Nieves.

He and his father, David (also a member of the VBPD on scene that day), were among 29 survivors and first responders of the mass shooting who received tattoos of their choosing earlier this month, on the weekend of December 7. Four Israeli and 10 local tattooists donated their services.

Edit Ben Gida of Gida Tattoo Studio in Tel Aviv spent three hours decorating Nieves’ forearm with half a Spartan helmet blended with half a police badge, and John 15:13 across the bottom (“Greater love has no one than this: to lay down one’s life for one’s friends”).

Nieves had the original concept. He and Ben Gida finalized the design together over two weeks of emailing before she and her partner and husband, Avihoo, flew to Virginia with fellow Israeli tattoo artists Dor Dlugatch and Tomer Piltz.

“He hadn’t cried about [the incident] but he couldn’t stop crying during the procedure, and not because it hurt,” Ben Gida tells ISRAEL21c.

“The whole thing is very emotional because all these people have the same experience in common, but they haven’t been in the same room and haven’t talked about it in a long time. It was very intense in a good way, like a kind of therapy.”

The event was organized by Healing Ink, a three-year-old international nonprofit using tattoo arts to ease the physical and emotional pain of survivors of terrorism and violence.

More than 150 people in Israel and elsewhere have been tattooed through the program over the past four years.

“Israeli tattoo artists have grown skilled in covering injuries from terrorism and combat with beautiful artwork and are dedicated to a collaboration with local Virginian tattoo artists to help bring comfort to those marked by the Virginia Beach massacre,” said Craig Dershowitz, president of Healing Ink.

“Since we cannot prevent the causes of conflict, all we can do is offer survivors a new way to look at themselves and present themselves to others.” 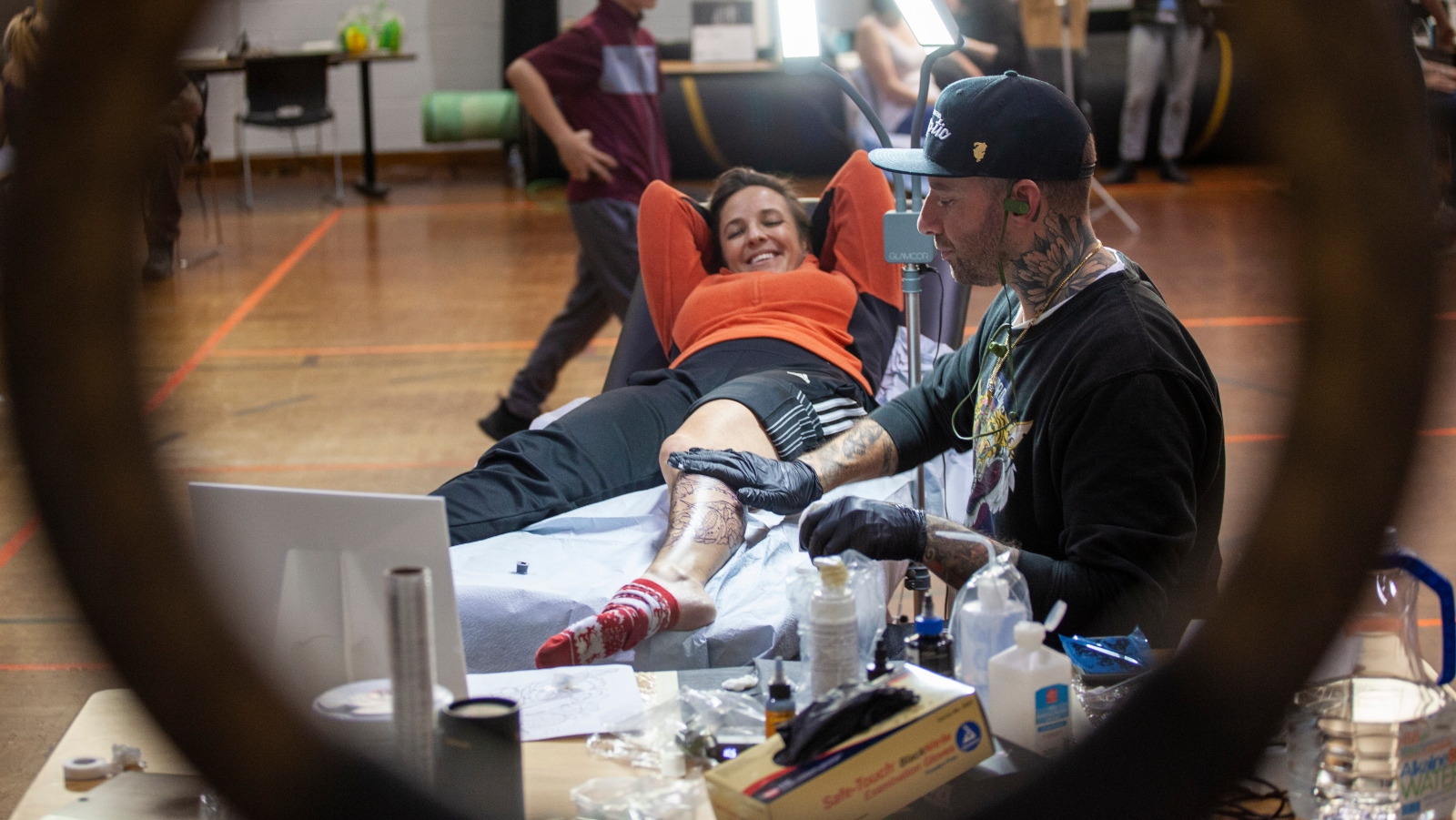 Healing Ink came to Virginia Beach at the invitation and sponsorship of the Community Relations Council of the United Jewish Federation of Tidewater.

“The massacre at Municipal Building 2 affected all of us in Virginia Beach,” said Robin Mancoll, chief program officer of the UJF of Tidewater.

“Everyone has a friend of a friend or colleague who was directly impacted in some way. We had heard about the tattoo artists in Israel who help victims of terrorism. Virginia Beach now shares that kind of pain and we wanted to do our part to help our community to heal.”

Dlugatch said that due to terror attacks and wars, “every Israeli knows first-hand someone who has been injured in one way or another. Maybe our experiences make us more sensitive and give us a desire to ease the pain. When the tattoo is done you can see them transform right in front of your eyes.”

In addition to Matthew and David Nieves, those receiving tattoos through the program in Virginia Beach include a victim who’d been shot in the face, a granddaughter and grandmother grieving the murder of the child’s father, and the FBI agent in charge of the investigation.

Ricky Cobb, who works in Building 2, asked Dlugatch for a tattoo representing his love for his three-year-old son. 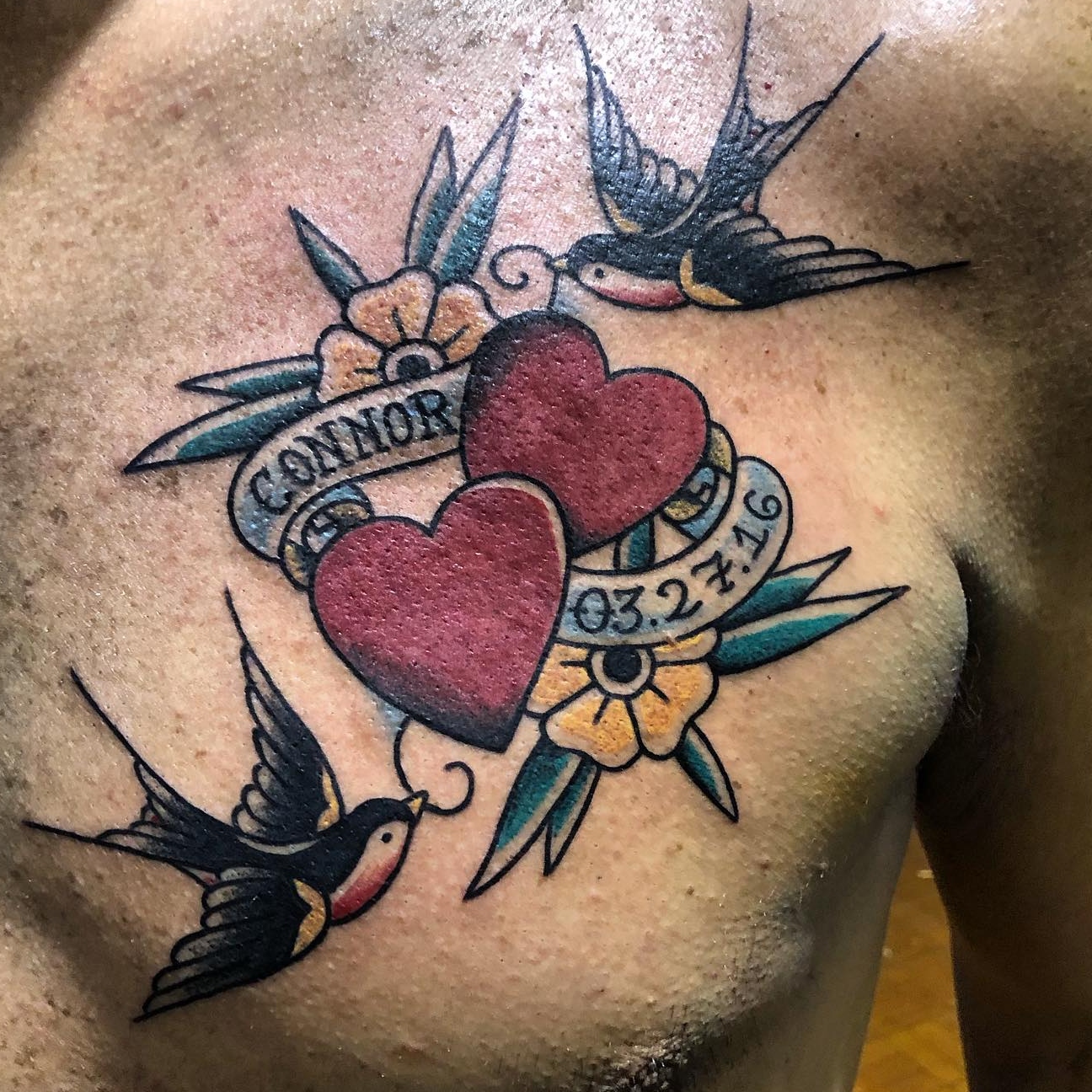 “While I hid under a desk, behind a locked office door, I kept telling myself over and over again that I had to make it out alive for my son,” Cobb recalled.

“Our bond was always very close, but the events of that day certainly strengthened and reinforced the fact that he needs me and I need him and I have to be there for him no matter what.”

Heather Lindley, another worker in Building 2, was pulled behind a file cabinet by her supervisor during the ordeal. From her hiding spot, she saw five people get shot. Lindley has been going to therapy twice a week. She asked Piltz for tattoo of a pink, blue and purple roseas a symbol of strength and resilience.

Dershowitz tells ISRAEL21c that all the tattoo recipients displayed a strong sense of emotional relief. “The artists felt empowered and the Israelis were embraced for their desire to help and respected for their talents,” he says.

“I think the community came together as one, Israeli and Virginian, recipient and artist, healer and healed, to make a great showing of what is possible through connection and unity.”