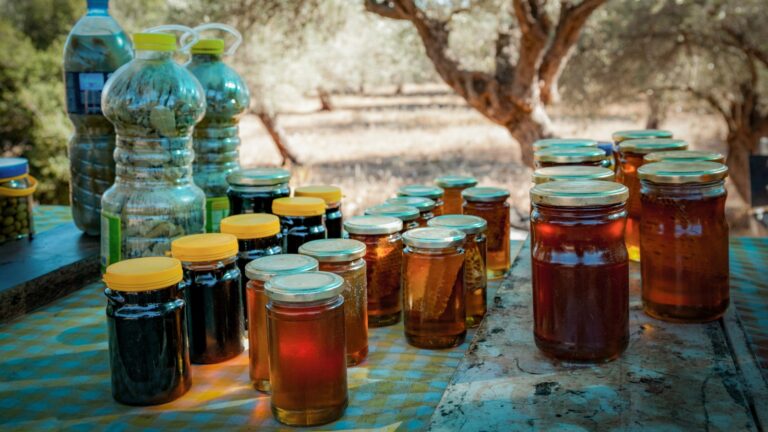 Honey sold at a roadside stand by Israeli Druzein the Carmel area of northern Israel. Photo by Anat Hermony/FLASH90

With the global population of bees in decline, honey could become a rare commodity on supermarket shelves.

A team of 12 students from the Technion – Israel Institute of Technology has been working for the past year on the development of a bee-free honey. It’s produced by the bacterium Bacillus subtilis, which “learns” to make honey following reprogramming in a lab.

Their efforts have paid off sweetly: The team won a gold medal at the recent iGEM (International Genetically Engineered Machine) competition held in Boston.Some 300 teams from universities around the world took part.

This is the sixth gold medal Technion students have won at iGEM since it was established in 2004 by the Massachusetts Institute of Technology to give students the opportunity to experiment in synthetic biology.

In addition to developing the science, an equally important component of iGEM involves creating a real business enterprise. The Technion team created its own website and a catchy company name: BeeFree.

“Our vision is to create a sustainable BeeFree honey using engineered bacteria, which will process a nectar-like solution using secreted enzymes that mimic the honey stomach environment,” the website states.

The team collaborated with two Israeli technology firms: Bio-castle, which makes a product that biodegrades contaminants in water (they usedit to collect the proteins needed to make synthetic honey), and Tsuf Globus, which produces herbal “medical honey.”

One previous iGEM team from Technionpublished an article in the journal ACS Biomaterials Science and Engineering describing how engineered bacteria can be used to detect and measure harmful substances in food and water. Another team patented a device to prevent baldness based on the activity of bacteria in the body.

“The winnings are definitely exciting, but equally important is the intellectual property created around the project,” said Prof. Roee Amit, who heads the Technion’s Synthetic Biology Laboratory for the Decipherment of Genomic Codes.

Participation in iGEM also requires a social element. This year, the Technion group held a hackathon for 10th to 12th graders in the Haifa area on environmental issues and sustainability. The winning group proposed an application that would allow supermarkets to offer lower prices on products about to expire.

For honey-lovers, continued availability of the sweet stuff will be its own reward – at any price.