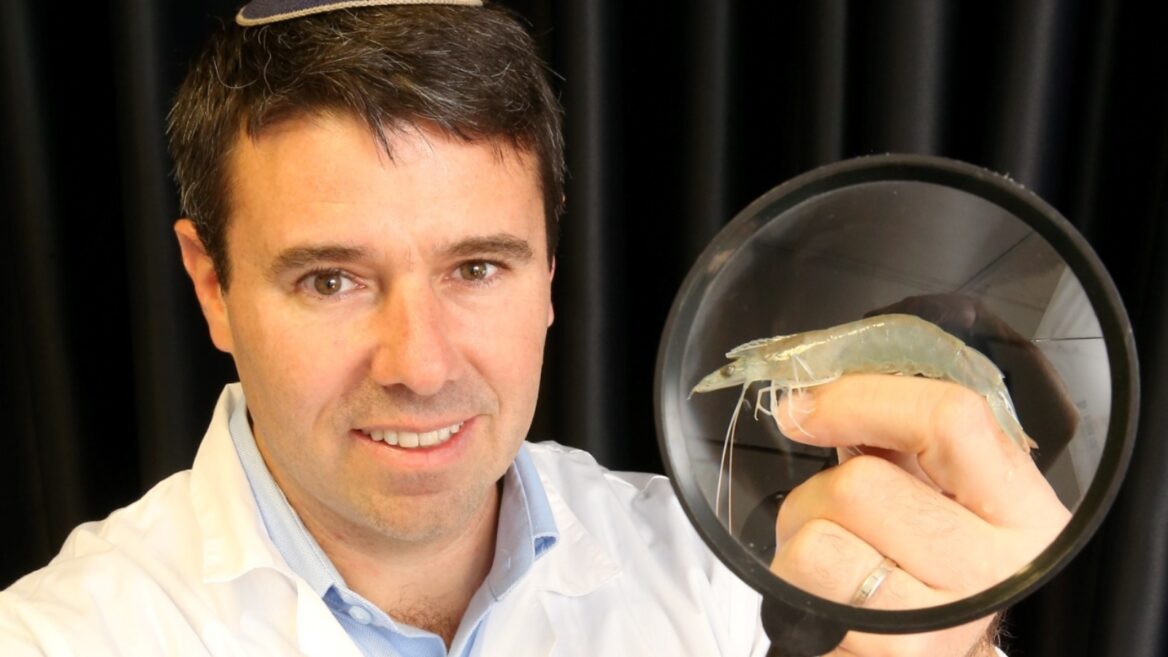 Can an antiviral food additive for farmed shrimp be adapted for protecting humans against coronavirus?

The coronavirus crisis has concerned him from the start. In January, he helped organize a delivery of 10,000 protective facemasks on the last flight to China from Ben-Gurion International Airport. On March 15, he agreed to advise the Israel Defense Forces’ Home Front Command on dealing with the epidemic in Israel.

Schroeder explains that five years ago, his lab invented a technology that boosts the immune system of animals against viral diseases.

The invention was spun off into a Haifa-based startup, ViAqua Therapeutics. With Schroeder as scientific adviser, ViAqua decided to focus on shrimp, an important aquaculture product in many countries. A viral infection called white spot syndrome is wiping out nearly 30 percent of the shrimp population globally every year.

“The feed proved extremely effective in trials against the virus conducted in Thailand, USA and Europe,” Schroeder tells ISRAEL21c.Regulatory approval is expected this year in 11 countries.

Schroeder believes the same antiviral technology could be adapted for humans.

“The gap is not great. We understand how the virus works and where we can attack it to stop its progression inside the body,” he explains.

Research partnerships could push this approach forward as the pandemic continues.

Elephants never forget, or get cancer

ViAqua Therapeutics is one of four biotech startups in which Schroeder is involved. It’s not the only one with an animal connection.

Eager to find out more, Schroeder invited Schiffman to dinner in Haifa that evening.

“Elephants’ body mass is 100 times greater than ours and they have a similar lifespan. If they don’t get cancer even though they have 100 times more cells than we do, something is protecting them that we lack,” Schroeder learned from Schiffman.

The conversation led the two scientists to cofound Peel Therapeutics (“peel” is Hebrew for “elephant”).

The company, jointly held by the Technion and the University of Utah, discovered which protein protects elephants from cancer: P53.

“Humans have two copies of P53, and elephants have 40 copies of P53,” Schroeder tells ISRAEL21c. “One of the elephant copies is a super-acting P53. I thought we could use nanotechnology to deliver this elephant protein to humans as a medication.”

In Petri dishes, synthetic elephant P53 effectively killed cells from 15 types of human cancers. “It is unbelievable to see how the cancer cells explode,” says Schroeder. Preclinical trials are proceeding.

The license for the company’s injectable medication to treat severe osteoarthritis is now owned by Sun Pharmaceutical Industries, one of the world’s 10 largest specialty and generic medicine makers.

Advanced clinical trials are planned this year in the United States and Europe.

“It was one of the greatest moments of my life when I heard the results of the first clinical trial,” says Schroeder. “A single injection lubricates the knee with a new medicinal compound and lets patients regain daily function with almost no pain medication, which is amazing.”

The effect is immediate and lasts about 90 days. Pending further trials, Schroeder hopes to see the Moebius medication on the market around 2022.

“Not knowing which medication to give is one of the greatest challenges physicians face daily,” says Schroeder.

“It’s assumed in breast cancer that about one-third of patients receive medication they don’t respond to. And that type of cancer has the greatest arsenal of research and treatment options. So we wondered: Could we improve the personalized medicine process?”

They invented a technology that works like an allergy test inside the patient’s tumor.

Nanoparticles containing minuscule doses of different medications — each the size of 1/1000 width of a hair – are introduced into the tumor. They’re tracked using a unique barcoding system to determine within 48 hours which is most effective.

“We had a lot of moments of almost giving up because it was so hard,” says Schroeder, “but an amazing team of students and researchers got it to work.”

Backed by the NGT3 (Next Generation Technology) venture fund in Nazareth, Barcode Diagnostics is starting human clinical trials this year in Israel.

Schroeder expects a fast regulatory path because the technology fills an unmet need in cancer treatment. 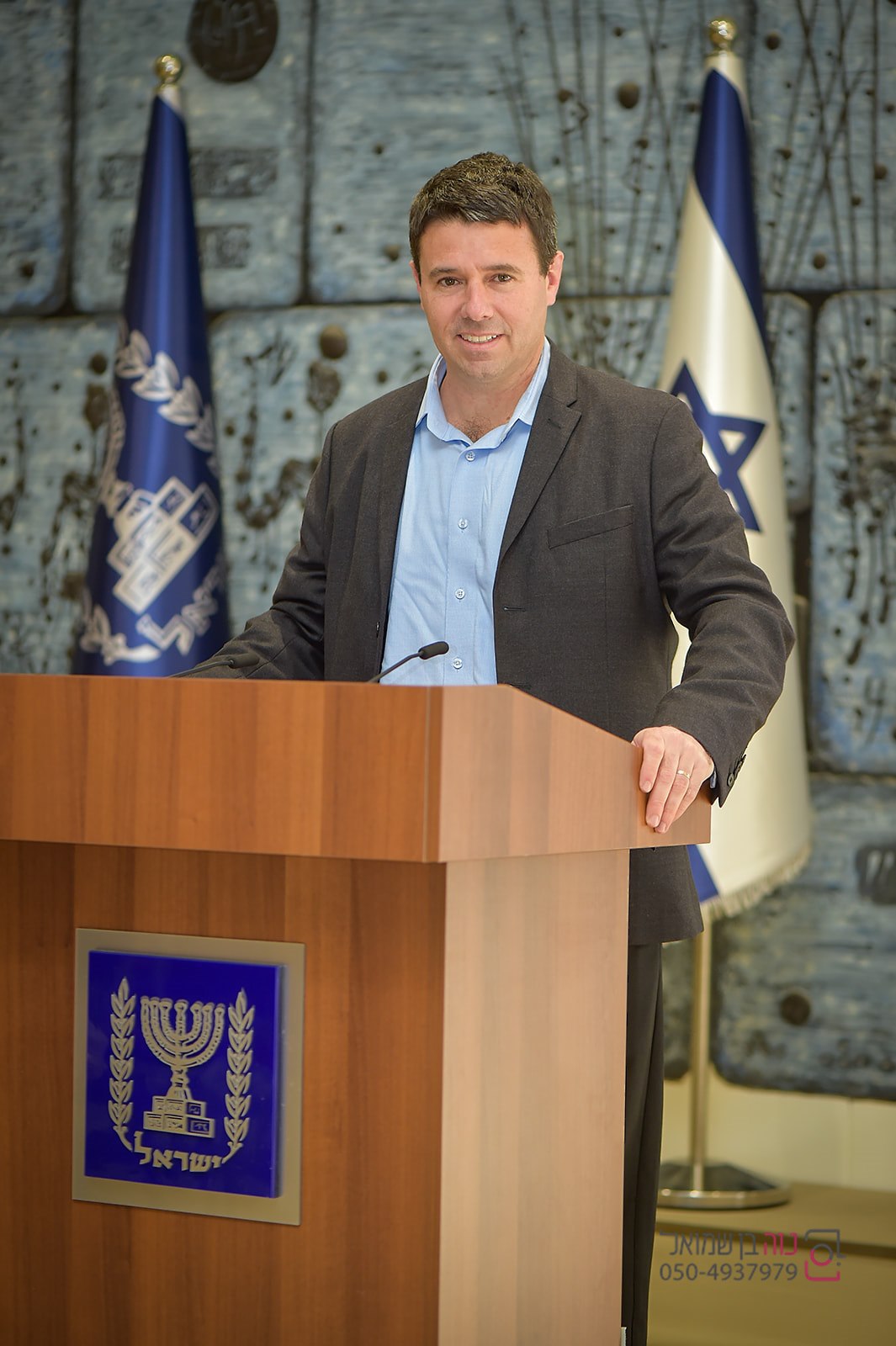 Technion researcher Dr. Avi Schroeder is advising the Home Front Command on dealing with coronavirus. Photo courtesy of the Technion

Schroeder was raised with four siblings in a Jerusalem family steeped in science, medicine and the Jewish value of tikkun olam, repairing the world.

His father, physicist and lecturer Gerald Schroeder, has written such books as The Science of God: The Convergence of Scientific and Biblical Wisdom. His mother, Barbara Sofer, is an award-winning author as well as Israeli director of public relations for Hadassah.

Ever since completing graduate studies in chemical engineering at Ben-Gurion and Hebrew universities and a postdoc at the Massachusetts Institute of Technology in 2012, Schroeder has looked for innovations that “you can invent in a lab and really change people’s lives.”

In addition to his lab and the four startups, and now advising the Home Front Command, Schroeder teaches chemical engineering and nanobiotechnology at the Technion. And he is raising five children with his educator wife, Hadas.

“I surround myself with great people. I learned that when you grow teams of great people around you, you can do great things and be more meaningful with your time,” Schroeder tells ISRAEL21c.

“Good science has to be connected to the real world, so in addition to scientists we also need people who understand the medical reality and the business around the science — how the product should look, which patients would benefit most, and how to navigate the regulatory space.”

Schroeder’s lab is “a great place to invent disruptive technologies,” he says. “Companies come in to talk to our students; we have WhatsApp groups with the CEOs. I’m excited about all our products and I believe they all can make a big difference.”

UNCOVER ISRAEL - Get the ISRAEL21c
Weekly Edition free by email
Sign Up Now!
Bring Israel's story to life.
Millions of people around the world rely on us to gain a deeper understanding of Israel. We are the trusted source for original content you won't find anywhere else.
You can make a difference. Donate today to support journalism that brings Israel’s story alive.
SUPPORT ISRAEL21c
Read more on:   Health, coronavirus, Cancer, Osteoarthritis, Personalized medicine, Technion-Israel Institute of Technology