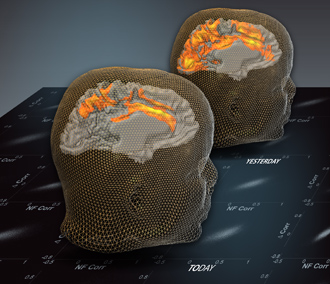 New research at the Weizmann Institute of Science shows that scientists can explore the brain, like archaeologists, and uncover the history of past experiences. The research shows that spontaneous waves of neuronal activity in the brain bear the imprints of earlier events for at least 24 hours after the experience has taken place.

This ability could reveal what makes each of us unique, and could enable the objective diagnosis of a wide range of neuropsychological diseases.

The new research is based on earlier findings from the lab of Prof. Rafi Malach of the Institute’s Neurobiology Department and others that the brain never rests, even when its owner is resting.

When a person is resting with closed eyes – that is, no visual stimulus is entering the brain – the normal bursts of nerve cell activity associated with incoming information are replaced by ultra-slow patterns of neuronal activity. Such spontaneous or “resting” waves travel in a highly organized and reproducible manner through the brain’s outer layer – the cortex – and the patterns they create are complex, yet periodic and symmetrical.

Tal Harmelech, under the guidance of Malach and Dr. Son Preminger, set out to uncover their significance. The idea was that the patterns of resting brain waves may constitute “archives” for earlier experiences.

As we add new experiences, the activation of our brain’s networks lead to long-term changes in the links between brain cells, a facility referred to as plasticity. As our experiences become embedded in these connections, they create “expectations” that come into play before we perform any type of mental task, enabling us to anticipate the result.

The researchers hypothesized that information about earlier experiences would be incorporated into the links between networks of nerve cells in the cortex, and these would show up in the brain’s spontaneously emerging wave patterns.

The researchers had volunteers undertake a training exercise that would strongly activate a well-defined network of nerve cells in the frontal lobes. While undergoing scans of their brain activity in the Institute’s functional magnetic resonance imaging (fMRI) scanner, the subjects were asked to imagine a situation in which they had to make rapid decisions.

The volunteers received auditory feedback in real time, based on the information obtained directly from their frontal lobe, which indicated the level of neuronal activity in the trained network. This “neurofeedback” strategy proved highly successful in activating the frontal network – a part of the brain that is notoriously difficult to activate under controlled conditions, the researchers said.

The findings were published in the Journal of Neuroscience.