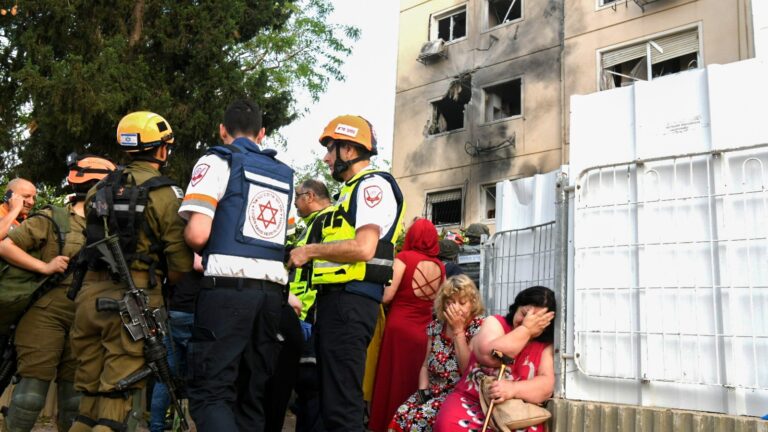 The scene outside an Ashkelon apartment building hit by a rocket fired from the Gaza Strip on May 11, 2021. Photo by Flash90

In the wake of a barrage of missiles launched from Gaza into Israel since Monday, Israeli President Reuven Rivlin invited citizens from the Gaza “envelope” area and greater southern Israel to his official Jerusalem residence, Beit Hanasi.

“On Tuesday 11 May / 29 Iyyar, and during the period of conflict, groups of children and adults from the areas under missile attack are invited to Beit HaNasi to enjoy the educational and experiential tours offered by the visitors’ center,” the president tweeted in Hebrew (see below).

“Beit HaNasi will have extra tours to help relieve the tension and offer respite for residents of the south until life returns to normal.”

The Israel Tourism Ministry and many cities and regional councils — as far north as the Golan Heights and as far east as the Binyamin Regional Council — also offered residents of the South to come and enjoy free admission to museums, historical sites, theater performances and other activities, as well as hospitality if needed. Twenty hotels are offering residents of the South and Gaza envelope steep discounts.

Some of the cities that opened their doors to fellow citizens, including Tel Aviv, soon came under attack as well. 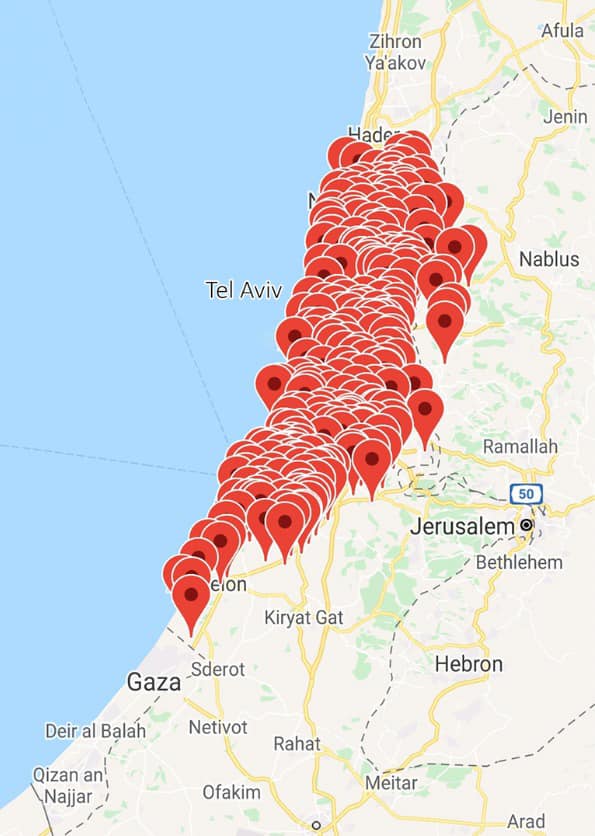 IDF map showing where air-raid sirens sounded in Israel in one 30-minute period on May 11, 2021.

An increasing number of missiles began reaching the western outskirts of Jerusalem, and on Tuesday, air-raid sirens sent Israelis running for shelter all along the eastern coast as far north as Hadera and well into the center of the narrow country.

Today (May 12) sirens have continued blaring every few minutes in the Gaza envelope towns as well as cities such as Ashdod and Beersheva.

Many rockets fired from the Gaza Strip have been intercepted by the Iron Dome missile defense system, but the first casualties were reported early Tuesday as some 26 people in Ashkelon were injured after missiles struck their homes.

By Wednesday, the Israel Defense Forces reported that 1,050 rockets were fired at Israel from Gaza within a 40-hour period.

This is why we need to defend ourselves.(Audio warning: sirens)

Posted by Israel Defense Forces on Wednesday, May 12, 2021

Hospitals have admitted scores of Israelis injured by the attacks or while running for shelter. At least six deaths were reported in cities south of Tel Aviv, including Ashkelon, Rishon LeZion and Holon. 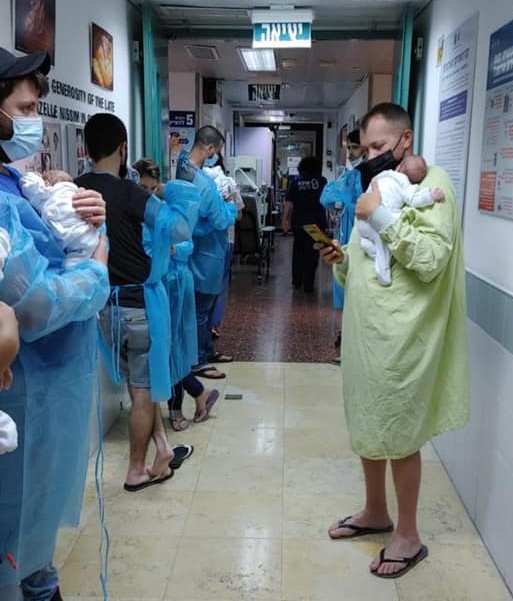 Fathers took their newborns from the nursery and held them in a fortified hallway while rockets rained over an Israeli hospital on May 11, 2021. Photo courtesy of IDF

According to the Israel Trauma Coalition, on Sunday and Monday hundreds of balloon-borne explosives and incendiary devices were launched from Gaza into southern Israel, causing 39 fires.

In addition, loudspeakers set up in Gaza near the border carried threatening messages in Hebrew toward Israelis.

As a result, the ITC “has seen a rise in the number of people approaching our Resilience Centers for therapy,” ITC Director Taly Levanon reported.

“A population particularly at risk are young families that recently coped with almost a year-long stay at home and now need to cope with the emotional price of living with renewed terror attacks.” She said caregivers are another population at risk.

The IDF is responding with targeted retaliatory strikes by air and is building up ground troops in readiness to address the escalating attacks.

Meanwhile, firefighters are struggling to control a large blaze on the trans-Israel energy pipeline in Ashkelon, sparked by a rocket from Gaza Tuesday evening. The past few days also have seen street conflicts erupting in Jerusalem, Lod, and in other mixed Jewish-Arab locations across the country.