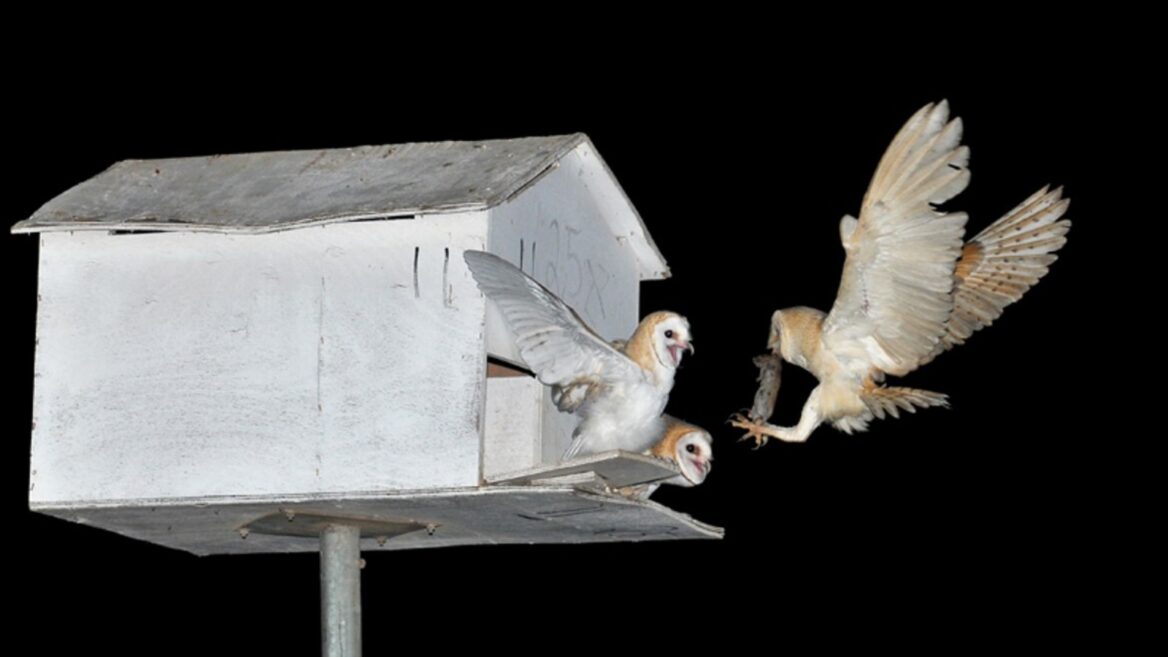 Israel’s own “Bird Man,” Prof. Yossi Leshem, presented his famous “Owls for Peace” project at the opening of the Dubai Expo in the United Arab Emirates earlier this month.

For nearly 40 years, the Tel Aviv University ornithologist’s environmentally friendly project — which promotes barn owls as biological pest control agents instead of toxic pesticides — has fostered cooperation among Jewish and Muslim farmers in Israel and its neighbors.

A barn owl family can consume annually between 2,000 and 6,000 destructive rodents. But because birds no know borders, the project works only if farmers on surrounding fields join in. Otherwise, the owls would be killed by chemical pesticides spread in those fields.

Owls for Peace became a national initiative in 2008 in cooperation with the Society for the Protection of Nature in Israel and the governmental ministries of Agriculture, Environmental Protection and Regional Cooperation.

“Today we have incorporated into the project Israel, the Palestinian Authority, Jordan, Morocco, Greece, Cyprus and Switzerland – seven countries!” says Leshem. “We hope that soon Dubai will join us, too.”

That is a likely possibility. Following his visit, Leshem received an email from Hiba Obaid Mohammed Al Shehhi, director of the UAE Ministry of Climate Change and Environment’s Marine Biodiversity Section.

“We were impressed by the [barn owl] project and its impact, and we are excited to look into ways that we can implement the project in the UAE,” she wrote to Leshem.

Owls for Peace may be part of a memorandum of understanding on environmental cooperation to be signed by Israel and the UAE. Leshem relates that barn owls could save millions of valuable Emirati date palms from rats — which can climb trees – without using chemical pesticides. 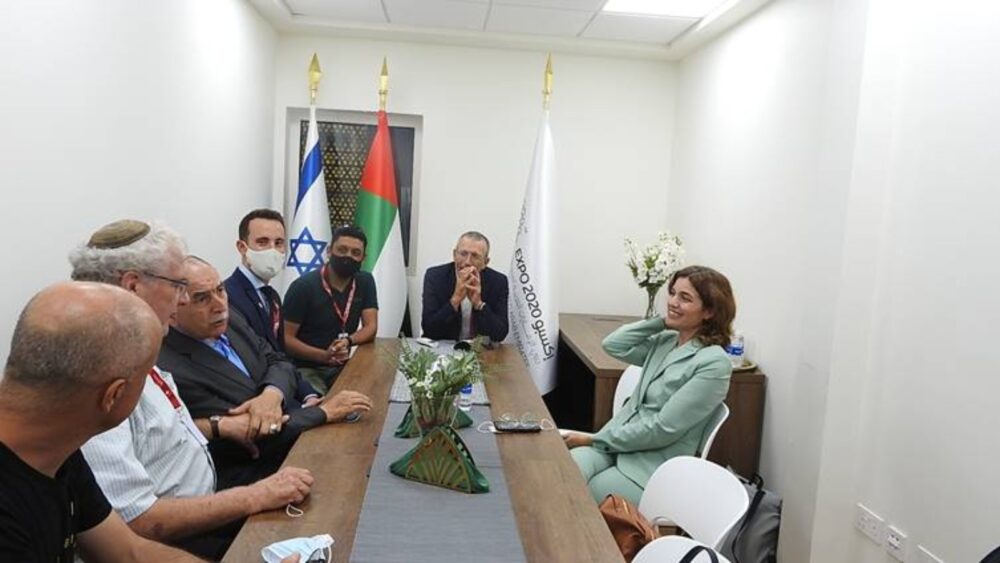 Prof. Yossi Leshem and his delegation meeting Israel Environmental Minister Tamar Zandberg in Dubai. At the Expo, Zandberg and the KKL-JNF launched the DeserTech international innovation center for the benefit of all countries in the fight against climate change and its repercussions. Photo courtesy of Yossi Leshem

The Swiss Pavilion will host the exhibition throughout the six months of the Dubai Expo, an event expected to attract about 25 million visitors. 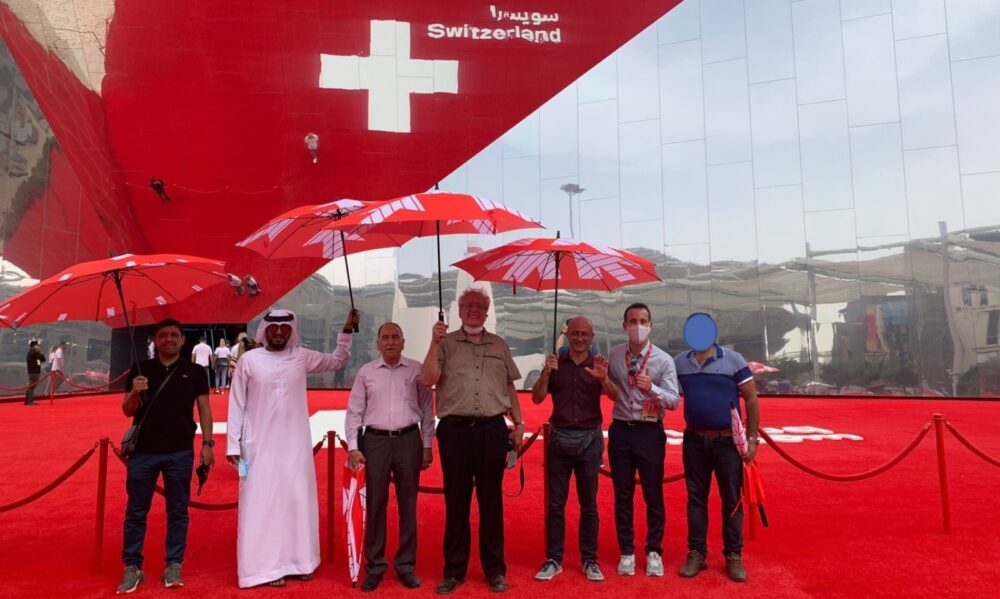 Prof. Yossi Leshem, center, with his delegation at the Swiss Pavilion of the Dubai Expo, October 2021. Photo courtesy of Yossi Leshem

As of 2020, the Owls for Peace project has led to the installation of about 5,000 nesting boxes for barn owls on Israeli farms.

“We started with 14 boxes on Kibbutz Sde Eliyahu in 1983,” Leshem points out.

Owls: the new symbol of peace

There are about 390 nesting boxes in Jordan, 120 in Palestinian Authority territories, close to 600 in Cyprus and 110 in Greece so far. In January, Leshem will travel to Morocco to help choose the best fields in which to install the first nesting boxes there.

Leshem’s colleague in Morocco, Prof. Imad Cherkaoui, hopes to get Egypt, Algeria and Tunisia involved in Barn Owls for Peace as well. Cherkaoui’s participation in the project’s presentation at the Expo was front-page news in Morocco.

“We also had a meeting with a key person from Bahrain who wants to come to Israel and learn more,” says Leshem.

He will host a five-day international seminar in Israel next month to present the owl project and new associated research.

“Everyone at the Expo was very excited to learn what we do,” Leshem tells ISRAEL21c. “The barn owl is replacing the dove of peace. It’s not just a symbol; it does the job.” 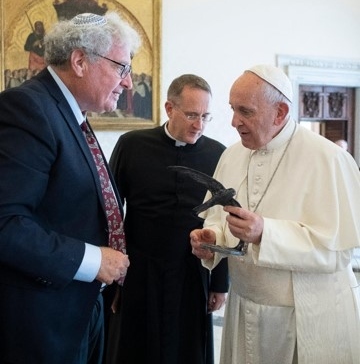 Leshem is always eager to spread the message far and wide. He traveled to the Vatican in 2019 to present the Barn Owls for Peace project to the pope.

His children’s book about barn owls, available in Hebrew, Arabic and English, is titled Buma the Barn Owl: The Farmer’s Friend.

UNCOVER ISRAEL - Get the ISRAEL21c
Weekly Edition free by email
Sign Up Now!
Bring Israel's story to life.
Millions of people around the world rely on us to gain a deeper understanding of Israel. We are the trusted source for original content you won't find anywhere else.
You can make a difference. Donate today to support journalism that brings Israel’s story alive.
SUPPORT ISRAEL21c
Read more on:   Spotlight on Israel, Environment, barn owls, Yossi Leshem